On Experimenting, and Pairing Red Wines with Shellfish

Today: Our next step in becoming better tasters? To challenge long-held assumptions about food and wine pairings. Let's break the mold. 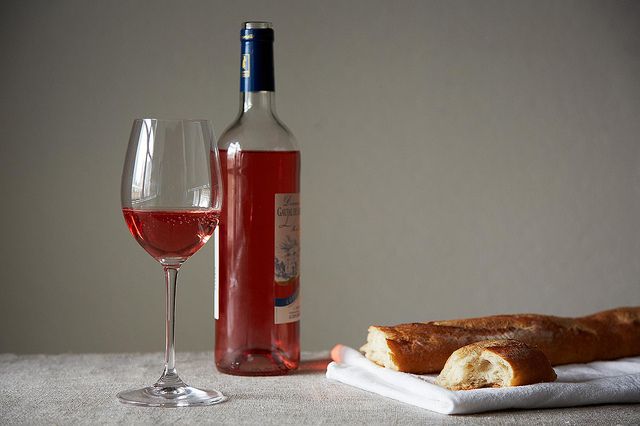 David Rosengarten and Joshua Wesson published one of the iconic books on food and wine pairing, called Red Wine with Fish: The New Art of Matching Wine with Food. This is groundbreaking news -- or at least it would be if the publication date of the book wasn’t 1989.

Despite many efforts to the contrary, the old adage that red wine pairs with meat -- and white with fish -- still holds popular sway today as it did then. It was time for me to revisit the idea, especially since a happy occasion presented itself: to celebrate our anniversary, my husband Chris offered to cook “the dish that won me over,” a dinner of shrimp with the shell on, sautéed in butter, cognac, and served with a tomato-cream sauce. It’s all served with torn chunks of baguette, and you eat everything with your hands. This was the dish that convinced me that he was The Guy.

Off to the wine shop I went. I explained that I was looking for three red wines to pair with a shellfish dish -- the point here was to challenge long-held assumptions, to experiment with different food and wine combinations, and to enjoy the whole process along the way. We started our search.

More: Enjoy the process even more by picnicking with your wines. 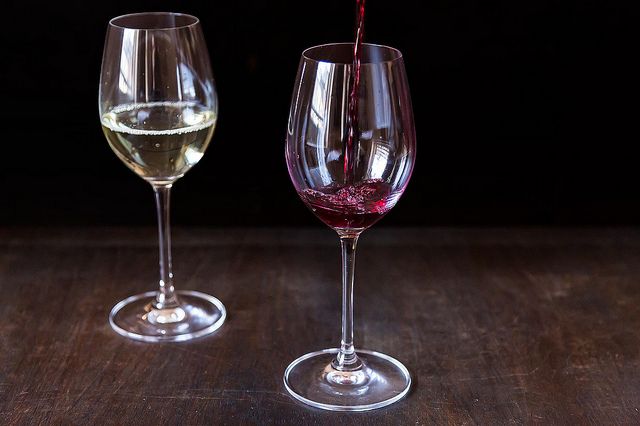 I was looking for something savory, so asked for a wine from the Rhône Valley of France; they're usually exactly that, and able to wrap themselves around a wide array of flavors. We decided on the 2009 Vinsobres from Domaine Chaume-Arnard, a Grenache-Syrah blend from the southern Rhône.

I thought that a wine with more acidity than tannins would work well, since acidity is the saliva-inducing characteristic that prepares your mouth for umami-enhanced, savory food. We went with a 2010 Barbera d’Alba from Franco Serra in the Piedmont region of Italy.

Finally, we looked for a red wine produced in a region along a coastline; if anyone could propose a solution to the red wine with fish dilemma, wouldn’t it be people whose diet involves fish on a regular basis? My friend at the wine shop led me to the 2012 Whispering Angel Rosé from Caves d’Esclans in Provence, France. A Rosé rather than a full red wine was bending the rules of this experiment a little, but then again, wasn’t red wine with fish supposed to be bending the rules, too? 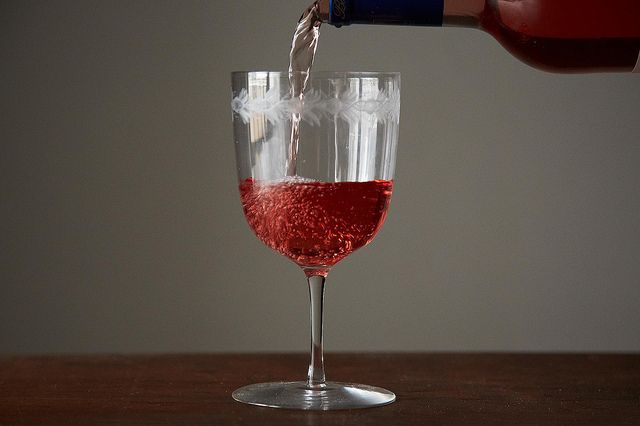 He started cooking, I started drinking. The Whispering Angel was lightweight, sippable, and relaxing. It wasn’t the texture I needed for this dish, with its heavy cream and dense meat of the large shrimp, but as a precursor it worked well.

Next we tried the Barbera, which had the acidity I was looking for yet was still unobtrusive. It let the shrimp dish take center stage, but the combination finished with a sour taste on the palate. When I considered the different foods that would work well with this particular wine, they had a pungent, gamey character to them: think olives, roasted red peppers, or a Middle Eastern lamb ragu rather than the tomato-creaminess of the dish that was in front of me.

Finally we turned to the Vinsobres from the Rhône, which was a little showy at first. It was also the most full-bodied. It’s the kind of wine that stands up and says “I’m here!” yet is confident enough to take turns letting the food take the lead.

If you’re looking for reds with shellfish, turn to Rosés and Rhone-style wines -- but it turns out the takeaway from this particular food and wine pairing experiment is much the same as it is from more than a decade of marriage. Take turns. Experiment. Improvise. And leave the dishes till morning.

emily O. May 30, 2013
To celebrate my 29th birthday, I dined with friends at Terzo Piano in the modern wing of Chicago's Art Institute. We ordered glasses of Whispering Angel Rose and swooned. Can't tell you what we ate, but definitely remember the wine.