A Different Sort of Egg Salad 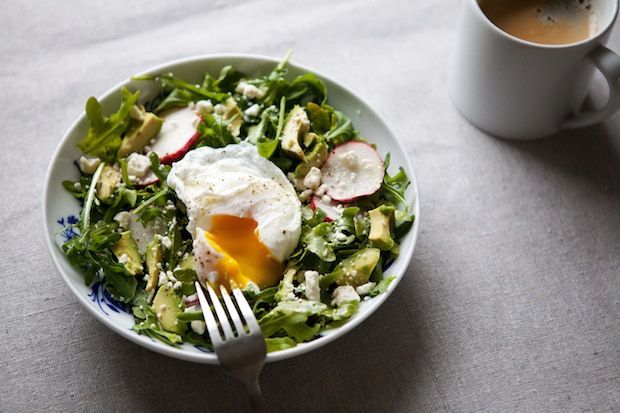 It’s one of those facts of life – sometimes a girl’s just gotta feel French.  There are assorted means for accomplishing this, including wearing designer jeans and heels even though you’re taking out the trash or looking annoyingly elegant while eating a flaky, messy pain au chocolat. But when I need a fix, the one I use most often is eating a lunch of frisee salad topped with lardons and a poached egg, accompanied by a glass of wine. (Because of the whole wine at lunch thing, I don’t get my fix as often as I’d like, sigh.)

During one of these lunches last year, I had the sudden realization that if a salad makes a good vehicle for an egg at lunch, then a salad could also be my breakfast. Just switch the wine for a cup of coffee!  Not only this, but salad as good egg vehicle holds true for other types of lettuce, not just frisee.  Thus, a different sort of egg salad swiftly became a staple of my breakfast table.

I vary the lettuce and veggies according to what I have, but my current favorite is this one.  I’ve been eating it weekly for about two months now and I plan on stopping only when I can’t get any more radishes. Lemony arugula, crisp rounds of radish, salty feta, and lots of sliced avocado turn out to be particularly delicious once coated in runny egg yolk. I may not feel French after I finish it, but I feel full and ready for my day.

3 handfuls of arugula
2 small radishes, trimmed and thinly sliced
½ Tbs. lemon juice
¾ tablespoon olive oil
¼ of an avocado, sliced – at least.  You can use more if you’d like, I won’t judge.
1 ½ tablespoons crumbled feta
1 large egg
Splash of vinegar
Salt and pepper

Greenstuff July 4, 2013
Salad Lyonnaise! One of my very favorite salads in all its iterations. Of course, no one in France would look at it as breakfast, but I've been pleased for years that Venus, a restaurant here in Berkeley, California, has had various versions on their breakfast menus for years.
Author Comment

fiveandspice July 5, 2013
Oh, I'm sure a French person would shudder at the idea of eating this for breakfast! But that doesn't mean the rest of us can't enjoy it in good conscience. :)

fiveandspice July 5, 2013
Thank so much Jenny! It's always a lucky time when it's time for breakfast.