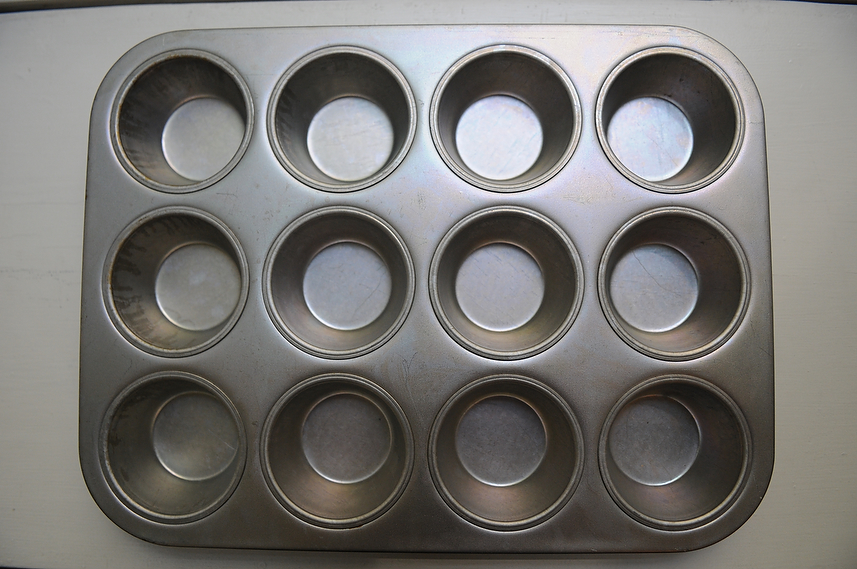 I have several regrets in life, but none quite rival my short-sighted decision to join the refreshments committee at my children’s elementary school.

I naively calculated that in exchange for baking a cake or two during the year, I would be free of constant pings imploring me to stock books in the library, chaperone rock climbing trips to Malibu, read to the class, collect canned goods at Thanksgiving, donate money so 5th graders can ride in a limo after graduating, clean classroom tables, buy 10 yellow t-shirts, or collect tickets and paint sets for the school play.

Well, I got that one wrong, on both accounts.

Friends, you can’t imagine how many meetings they have at schools, and apparently they all require a sweet. The other day when the email reminder of my obligation to bake for the magic show popped up, I searched food52 with desperation for a delicious confection suitable for weeknight baking.

I happened upon Nutella Cupcakes which has quickly become my go-to recipe for such occasions. (Obligations? Whatever.)

What makes this recipe so interesting is that it calls for very little butter – a mere two tablespoons – because its main fat source is the Nutella. Its ease stems from both its few steps and few bowls, and the fact that its very delicious ganache frosting is made in the microwave! (Some of you will frown about the corn syrup involved here. In general terms I agree. In worse-case scenarios of deep need, exceptions must be made.)

My kids helped me whip them up, and the whole thing was over in about an hour, including cooling time. I doubled the recipe and don’t you know, they all sold out during the first half of the show.

My kids liked these cupcakes so much I have since made them on two other occasions. Love you, Miss aptly-named pieceofcake!

I have only three small notes: I skipped the hazelnuts because no one wanted them, so I can’t speak to what they add. When I doubled the recipe I had just enough but when I made only a dozen, as the recipe calls for, I seemed to only have enough batter for 10. (This may have been because I filled a few cups too high. Don’t do that.)

Finally, you’ve got to make sure you get that Nutella as smooth as possible; if it lumps here and there you will have a concave cupcake or two in your batch. If this happens, do as I did and cover the sin with more frosting, and call it molten.

2. Whisk together the flour and salt and set aside.

3. With an electric mixer in a medium bowl, beat the butter until creamy. Add the vanilla and almond extracts and beat until well-blended. Add the sugar and beat until fluffy and pale in color. Beat in the Nutella until well-incorporated, stopping to scrape the sides and bottom of the bowl while beating. Add the eggs and beat until smooth. On low speed, beat in half the flour mixture just until it beings to disappear into the batter. Beat in the milk. Fold in the remainder of the flour mixture by hand until the batter is smooth.

4. Pour the batter into the muffin cups, filling them no more than 1/2 full. Bake for 25 minutes or until a toothpick comes out with moist crumbs -- if in doubt, pull them from the oven a bit early -- do not over bake. Cool completely in the pan on a wire rack.

1. Place the chocolate chips, butter and corn syrup in a microwave-safe bowl. Microwave on high for 30 second intervals, stopping to stir after each interval, until the mixture is shiny and smooth. Stir in the vanilla.

2. When the cupcakes are completely cool, using a spoon, top each one with about two teaspoons of the ganache, and with the back of the spoon coax it as close to the edges as possible without letting it drip down the sides (or go on and let it drip...drippy chocolate is rarely a bad thing). Sprinkle on a bit of the chopped hazelnuts. Let the ganache set before storing in an airtight container at room temperature overnight--these cupcakes truly taste better the next day. But if you want to defy me and serve the cupcakes immediately, refrigerate them for about five minutes and the ganache will quickly set.

Lexi E. February 4, 2015
Tried making these at high-altitude, and they sunk like crazy, even when I made my typical high-altitude adjustments. They were still delicious, just not very pretty!
Any suggestions?

[email protected] June 27, 2010
Made these for a play date and there are out of this world. It was so easy to make the batter and the ganache. Thanks for sharing.

Margaret M. June 10, 2010
I made Jenny's Nutella cupcakes for our friend Bob's birthday party last month, and they were a big hit. Delicious! And better made the evening before. I doubled the recipe and got 22 cupcakes. That was my fault, I over-filled the cupcake tins. The tops of the cupcakes sunk a bit, but that was less noticeable once the ganache and garnish of toasted hazelnuts was added. I'll be posting about this recipe and crediting Food 52 and Jenny on my food blog later today. http://eatfirst.typepad.com Thanks for the recipe and inspiration.

Amanda H. June 10, 2010
Thanks so much for your generous comment -- the recipe was created by pieceofcake, one of our community members, so please credit her as well!

Rhonda35 May 29, 2010
Made these in mini version - baked 17 minutes - perfect! One addition that I think adds something - I added a good pinch of salt to the ganache - it really takes the flavors to another level with the play of sweet against that tiny bit of saltiness. Also, for those who may live in 1957 like me and not own a microwave: you can make the ganache in a double boiler - it works fine. Enjoy - these are amazing!

MemeGRL May 28, 2010
These were amazing. Thank you so much for this recipe, I had every ingredient hanging around my kitchen anyway and they saved my hide on a night I needed to come up with a yummy dessert in a hurry. Now off to replace the Nutella to make more!

Shauna S. May 24, 2010
Hi everyone! About the vanilla, it should be 1/2 teaspoon pure vanilla extract. I didn't include it in the recipe when posted on Food52--sorry for the confusion! Also, for those concerned about the corn syrup, I should also add that Karo light corn syrup doesn't have HFCS anymore. Just check the label at the supermarket--it should just say corn syrup, vanilla and salt. Older bottles will have the HFCS, so be sure to check, Hope that helps!

Rhonda35 May 23, 2010
I have a catering gig for Memorial wknd - a "full moon" cocktail party cruise on the Chesapeake Bay (doesn't that sound like fun?!) - read Jenny's piece and immediately added these to the menu - making mini versions of the cupcakes - I KNOW they are going to be a huge hit.

mon8 May 23, 2010
How much vanilla extract is needed for cupcakes? Its listed in directions but not ingredients list. Looking forward to baking this soon... love Nutella =) Thanks!

kitchenwitchcookie May 23, 2010
For anyone who wants to try this recipe, but also wants to avoid using light corn syrup (because it contains high fructose corn syrup), I have found a company that sells Corn Syrup (not "light" and containing no HFCS). I substitute it for any recipe calling for light corn syrup with excellent results. Granted, it is still corn syrup, but lacks HFCS and is thicker pouring, so that takes a bit of practice. I'm sure there are others out there, but I'll provide a link to the manufacturer that I use: http://www.goldenbarrel.com/pancake-waffle-syrups.php

And these cupcakes sound lucious. I'll have to put them into my cupcake rotation (as I am someone who actually LOVES to bake! :D)

Shauna S. May 23, 2010
Hooray! I feel you on the corn syrup, but it had to be done here, just a teeny bit. It's what makes the ganache so glossy and easy to work with and gives it a nice, candylike chew. And the hazelnuts are just for a bit of crunch and to add the fancy, so including them is totally optional. I'm so glad they were a hit, and good to know they're kid tested and approved, too!

slicknik25 May 18, 2010
nutella was always a childhood favorite of mine - very excited to try this despite me not being the best baker!

KarenA May 17, 2010
i made an alternative version of Nutella FILLED cupcakes this weekend. Check my recipe out on kitchensecretingredient.blogspot.com

Amanda H. May 18, 2010
Great to know about your recipe -- what did you think of pieceofcake's recipe?

mrslarkin May 17, 2010
Ah, Nutella...Sconeboy's (almost) daily lunch. Thanks for reminding me about this recipe, Jenny. Will have to make it soon.

drbabs May 17, 2010
Last weekend I helped my daughter set up her (very tiny) kitchen in her Upper West Side studio apartment. She had one small bag of staples from her old apartment --including 2 jars of Nutella!! I'm so making these with her the next time I go into the city. Thanks for sharing!