Today: Even if you can’t travel, you can breakfast! 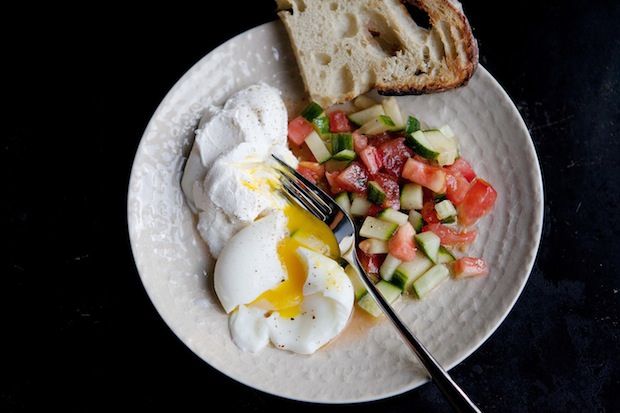 As a total breakfast person, I have great respect for cultures that really know how to put together a breakfast spread. I do like a simple piece of toast and cup of coffee for breakfast on occasion, but it doesn’t capture my fancy like the epic breakfasts of, say, Denmark or Germany -- both of which involve a seemingly endless parade of breads, meats, cheeses, spreads, and sometimes beer.

So, when a friend of mine and her Turkish husband took a group of our parents on a tour to Turkey (without me??!) and I started to get reports back about the marvelous breakfasts, I was very intrigued. And jealous. There was one day when I received a flurry of text messages to let me know they had eaten three breakfasts in a row -- my idea of a dream day!

From what I’ve gathered, your general Turkish breakfast includes eggs, tomatoes and cucumbers (either sliced or as a chopped salad), maybe some olives, fresh cheese or yogurt, and bread, usually with honey or jam. There can be other elements, but those make up the backbone. Guided by nothing more than this vague second-hand knowledge, I decided to make my own Turkish, er, Turkish-ish, breakfast. You can cook your egg how you like, but I’d say a runny yolk is a must. It slips and slides around, mixing with the juices of the vegetables and the creamy yogurt into a flavorful mess that’s a perfect dip for your bread. Even if you can’t travel, you can breakfast!

aysegul September 3, 2014
of course not all on the same plate

AnnArborJoan August 15, 2013
This kind of breakfast is common in the Middle East and reminds me of the wonderful Israeli breakfasts. I sometimes add a dollop of mayonnaise for the vegetables.
Author Comment

Clover88 August 11, 2013
This caught my eye during the week and I made it this morning for breakfast with fresh eggs right out from under our chickens and veggies from the Saturday Farmers' Market. We made the "glorious mess" and loved it. A new "go to breakfast" for weekend mornings!
Author Comment

fiveandspice August 11, 2013
Wow, that sounds like the perfect version! Wish I could steal my eggs right out from under the chickens!

Oui, C. August 9, 2013
Ahhh....Turkish(ish) is among my favorite cuisines! I was in Istanbul a few months back and can attest to the quality of their breakfasts....I miss them so.
Author Comment

fiveandspice August 10, 2013
Ooh, lucky you! What a fun place to get to visit! I can well believe you'd miss the breakfasts. :)

BoulderGalinTokyo August 9, 2013
Thank you for starting this column. Breakfast is my "weakest" time of day, so I'm always looking for new ideas!
Author Comment

I loveeeeeee this. I've heard superb things about Turkish breakfasts, especially about kaymak - a type of clottted cream, served with honey (read: http://www.seriouseats.com/2012/11/snapshots-from-istanbul-turkish-breakfast-is-awesome.html). Someday, I'll watch beautifully embroidered rugs move with the wind, while I feast on a seasoned tomato-cucumber salad, eating kaymak and the softest bread ever.

Thanks for 'travelling' by breakfast.

fiveandspice August 9, 2013
Yes! I've heard of kaymak as well! And as a total cream devotee, I am dreaming of trying it some time.

HalfPint August 8, 2013
I've fantasized about a Turkish breakfast ever since I watched Bourdain in Istanbul having a full breakfast with fresh flatbread, cheese and tomatoes. That was enough for me to want to fly out there just for breakfast(s).
Author Comment

fiveandspice August 9, 2013
That's how I felt after hearing about it too!