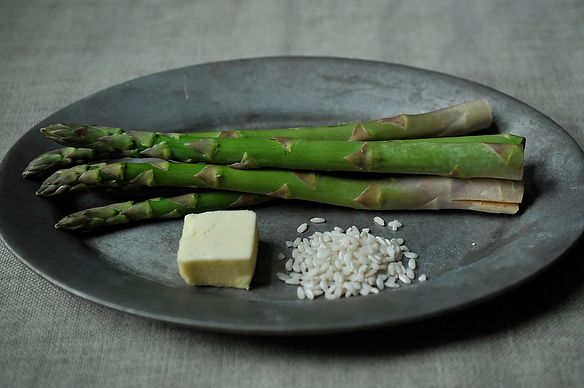 Because I live in Los Angeles, I am treated to asparagus throughout almost the entire year. But when springtime arrives, I join the rest of you in relishing the finest examples of this smart, versatile stalk of folic-acid packed lily (that’s right, put it in the Google!) that the fertile ground can offer.

Let’s take this vegetable to the weeknight kitchen. Of course you can simply steam it and dab its braided tip with some sea salt and nice black pepper and call it a night. But why not instead make it the very important accent on the already rich and delicious Browned Butter Asparagus Risotto; think a nice string of pearls added to that designer dress that you actually got at Target.

While this dish does require the normal amount of stirring and thus the same mild concentration that all risottos need, you don’t need to do much more than that. In truth, you don’t really need to even be sober, as I discovered while downing a very nice Chianti with a friend as I put this dish together. (Are you feeling judgment? Did I not tell you a blog or two ago that I am alone with my children nearly all the time these days? Uh huh, you’re passing the cork screw now huh?)

First, you are steaming this asparagus just the way KelseyTheNaptimeChef instructs you, being careful not to overcook it. Then you are browning your butter, preferably, Kelsey tells us, in a risotto pan which naturally I have never heard of (my large sauce pan did just fine). Browning the butter takes all of 3 minutes and the nutty flavor enhancement it provides is worth it.

Instead of the onion she calls for sautéing, I used a large shallot simply because I prefer them, but you do as you like as long as you use her method.

I also warmed my chicken stock a bit before adding it, because I think that works better somehow; I was left with about ¼ of a cup even though I measured out the 4 called for. She does tell you to add them ½ cup at a time which I suppose accounts for different brands of rice, so you might be left with some as well, or not. She instructs you to cook it for several minutes once the stock is absorbed; I found it done by the time this happened, perhaps because I did  add mine a bit slowly.

The recipe also calls for ½ cup of parmesan cheese – I just tossed in a giant handful, which was really a bit too much and I suggest you do as Kelsey says. The asparagus added the perfect texture, crunch and tasty bit of spring to this completely fulfilling and easy dish, perfect for a weeknight when paired with a salad. Or nothing else frankly –- it’s that satisfying. I’m not just saying this because I was on my third glass of wine when I ate it. Everyone else –- my dinner guest and the children –- agreed.

drbabs May 27, 2010
I generally love Kelsey's recipes and this looks great. (Even my husband would like it as long as I didn't put the cheese on his portion.) However, Jenny, I'm curious about something: does your daughter's budding vegetarianism not extend to chicken broth? (I ask this because on days when I'm feeling the vegetarian pull, I find it to be one of the hardest things to give up--vegetable broth doesn't do it for me.) Good luck with the move east, and if it's back to NY, I hope to get to meet you in person at some point.

EmilyNunn May 27, 2010
I absolutely love this recipe and Jenny's Pearl Necklace analogy. It is so incredibly simple, yet so elegant, luscious, and satisfying--I suppose depending on who is making/wearing it. I felt very sexy in it.

Kelsey B. May 24, 2010
I am so glad you liked it Jenny! Good luck with the move - are you coming back east? If so, we hope you'll make an "in person" appearance at F52 Headquarters. I hear you on the risotto pan, I had never heard of one until I unwrapped it in front of a roomful of people at my wedding shower. (R is for Risotto - there was an alphabet theme.) I've come to use it a lot, but it's definitely not necessary to run out and buy one. Spend the money on a few good bottles of wine instead!