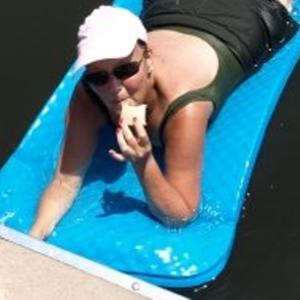 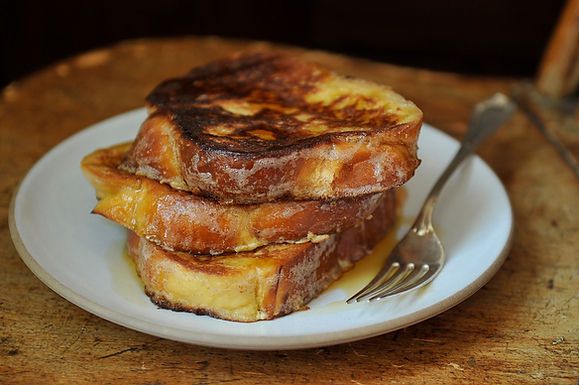 WinnieAb won this week's contest for Your Best Minestrone/Soupe Au Pistou with Smoky Minestrone with Tortellini and Parsley or Basil Pesto. 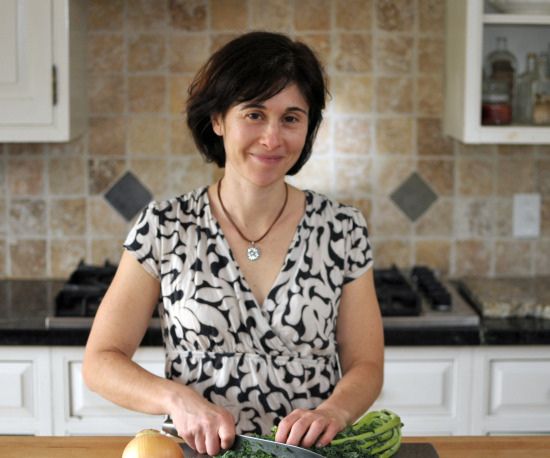 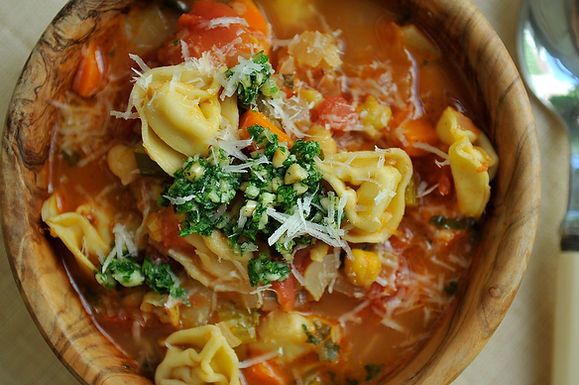 Describe an early food experience that has influenced the way you think about food and/or cooking.
Probably watching my grandmother make teacakes, a shortbread-type cookie that just makes me think about food and tradition. She never used a bowl. She'd mound the flour up on her "biscuit board," make a well into which all the wet ingredients went and mix everything together with her hands. This was likely the way her grandmother, and her grandmother's grandmother, made the teacakes. It instilled in me an almost reverence for family food traditions.

What's your least favorite food?
Calves liver, followed closely by any kind of cooked greens. Not sure how I managed to grow up poor in the rural south and despise greens; but I do.

What is the best thing you've made so far this year?
Wow. Tough one. It's been a good year so far in the kitchen. I did make a moussaka that was absolutely wonderful, and yesterday's pernil was pretty marvelous.

Describe your most spectacular kitchen disaster.
I ruined--RUINED, mind you--a very pricey piece of New York strip by taking it out of the oven, setting it atop the (electric) stove burner, and then inadvertently turning on the burner when I intended to turn on an adjacent one. I thought it was resting, but it was merrily charring away. It took me days to chip the remains out of the cast iron skillet and the meat filled the house with smoke, destroying what was going to be a wonderful dinner. For guests.

What is your idea of comfort food?
Oddly enough it is potato salad. I don't know why, but it is what I turn to when I am down, not feeling well or lonely.

Apron or no apron?
No apron. Dishtowel through the belt loop of my jeans.

What's your favorite food-related scene in a movie?
I think it has to be the scene in "Julie & Julia" where she's practicing onion dicing. Or, the scene in "To Kill A Mockingbird" where Walter Cunningham is eating lunch at Scout's and pouring syrup over his meal.

If you could make a show-stopping dinner for one person, living or dead, who would it be?
Sir Winston Churchill, one of my heroes. I would be thrilled with the chance for a dinner table conversation.

You prefer to cook: a. alone, b. with others, c. it depends on your mood.
Usually with others, at least with someone in the kitchen to keep me company and occasionally hand me this, or chop that for me.

When it comes to tidying up, you usually: a. clean as you cook, b. do all the dishes once you've finished cooking, c. leave the kitchen a shambles for your spouse/roommate/kids to clean.
I have to clean as I cook; my kitchen is too small to do otherwise.

Describe an early food experience that has influenced the way you think about food and/or cooking.
My parents owned a very well-known restaurant when I was growing up. Even though it closed years ago, food remains hugely important to my family, and I am happily passing on a love of food and cooking to my own kids.

What is the best thing you've made so far this year?
I've made lots of things I loved this year, many of which were inspired by food52 contest themes. I'd have to say the best thing I made this year was a great meal for 15 people in honor of Mother's Day, though. There were lots of moms at the dinner -- me, my mom, my mother-in-law, my husband's aunt, as well as a bunch of other family members. It was kind of stressful because I didn't have time to do any prep in advance but somehow it all came together and everything was great, especially the main dishes: grilled salmon with ramp chimichurri and a grilled beef tenderloin with mint and chive butter.

Describe your most spectacular kitchen disaster.
I accidentally added cumin instead of cardamom to an attempt at a coconut milk panna cotta recently. I realized it the moment the cumin went in and didn't serve it to anyone or anything. A small taste revealed it was beyond terrible and it ended up in the garbage.

What is your idea of comfort food?
Really big chocolate chip cookies right out of the oven are definitely my favorite comfort food.

Apron or no apron?
I've never been big on wearing an apron, and my clothes get very messy as a result. I am trying to get better about wearing one.

What's your favorite food-related scene in a movie?
I've got young kids so most of the movies I've seen in recent years are animated. I love the part in "Kung Fu Panda" when Po makes noodles for "the Furious Five." There's so much slurpy happiness in that scene!

If you could make a show-stopping dinner for one person, living or dead, who would it be?
I'd love to pull off a great dinner for Martha Stewart.

You prefer to cook: a. alone, b. with others, c. it depends on your mood.
I have a very open kitchen and love having company in there, but I'm pretty happy on my own, as well.

When it comes to tidying up, you usually: a. clean as you cook, b. do all the dishes once you've finished cooking, c. leave the kitchen a shambles for your spouse/roommate/kids to clean.
I am big on cleaning as I cook. I happen to be the chief dishwasher (unfortunately!), so I do try to get the dishes done as I go.

MrsWheelbarrow June 3, 2010
Two more fantastic recipes for the book. What inspired cooks you both are!!

lastnightsdinner June 2, 2010
Congratulations - another great group of winners and finalists!

fineartdaily June 2, 2010
Congrats to you KayB! It was so much fun to participate! Love your photo, too!

dymnyno June 2, 2010
Congrats to everyone who contributed recipes! And , special congratulations to the finalists and the winners!

lapadia June 2, 2010
Congratulations; Hat’s off to you both!

shayma June 2, 2010
congrats to both wonderful winners and a very special one to my friend, Winnie. x shayma

monkeymom June 2, 2010
Congrats! Looking forward to seeing more recipes from all the finalists.

Kelsey B. June 2, 2010
Congrats winners, these are awesome recipe and great stories!

aargersi June 2, 2010
BIG congrats to both! Is KayB eating French Toast on a float in a pool?

Kayb June 2, 2010
Actually, Kayb has just had a rather mediocre,albeit pricy, caprese salad in a pretty awful, albeit pricy, hotel in flyover country, where she has been cursing the sorry excuse for internet service for which said hotel is charging her $12.95 per day. She is,however, most excited to have won the contest, and thanks everyone for their congratulations, and will serve you lunch on a float in the lake whenever you want to visit!

drbabs June 2, 2010
Congratulations to you both!

TasteFood June 2, 2010
Congratulations winners and runners-up for another week of great recipes!