Today: We start at the very beginning. With crust. 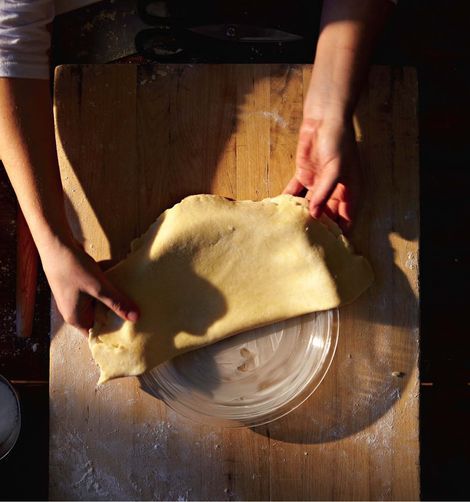 A mutual passion for executing the perfect pie crust was probably what truly started us on our journey into pie making. While Emily had gotten excited about making pies from a sculptural, hands-on perspective, it was Melissa who would take our crust recipe and tweak it (over and over again) to perfection with the addition of cider vinegar for tang and tenderness.

To this day you might still find us arguing about perfect crust execution, but we definitely agree that to work in our kitchen, you must have the ability to make a good crust, no matter the size or temperature of your hands. In our opinion, when it comes to baking pie for yourself and your friends and family, it's all about how you, the pie maker, handle it, and not what a machine can do for you.

Makes one single-crust (9- or 10-inch) pie; double amounts for a double-crust pie

To win a copy of The Four & Twenty Blackbirds Pie Book, tell us in the comments: What's your go-to pie crust recipe? We'll pick winners at random at the end of the week! (Unfortunately, we can only ship domestically.)

S L. July 1, 2018
My grandmother's pie crust! But for time issues, I have used Crisco shortening for over 50 years. That being said, I am going to try yours. It sounds good and I cook to please me first at this stage of my life. It allows me to experiment more.

NDavid June 28, 2018
I travel around techniques and lately have landed with Stella Parks. She knows oh-so many things!

Posey B. June 5, 2016
I use a 100+ year old family recipe from my great great grandmother who was the child of early settlers of the 125th American state of Arkansas. Our state was halfway there, but this pie is all the way there thanks to its lard base! I have no idea how they were able to keep things cold enough to pull of the flakey crust but it does work if one doesn't rush or cuss at it or stab it too much with a pastry blender. Of course, one can substitute shortening but it's not the same. So, when I just can't get my 21st century brain around using lard (it does happen) I use 4+20 BB's butter crust recipe. My great great grandmother and these ladies all use vinegar to keep the gluten from making the dough too tough. Again, I have no idea how this was done without ice and wish I had a time machine to go back and see this pie made by my forebear with all natural ingredients, no pesticides, everything farm to table!

Jim January 24, 2016
Comment for the random drawing:
My “go-to” crust recipe is a combo of this one and America Test Kitchen’s: butter tastes better but shortening makes for flaky crusts so, 3:1. A wetter dough is easier to handle so 50:50 ice cold water:vodka but less than the volume called for here. ¾ of the flour is cut in with butter/shortening in a food processor completely, then the last ¼ is added dry and barely pulsed (yet more flaky layers). I only use 1 TBS of the cider vinegar but boy, that’s a nice touch. Easy to work, flaky and tasty. For my clumsy hands, a go-to winner!

rhubarb! R. August 21, 2014
Does anyone find this way too moist? Most pie crust recipes use a few tablespoons of ice water until the dough comes together, but this recipe has an almost 1:1 flour to water ratio?

Peggy V. November 18, 2013
I learned to make pie crust from my aunt who lived to be 107! She was the official pie maker for our family. She would 'dance' around to roll it out...it was always very flakey. She used lard "Not too much ice water and cut the dough until it is the size of peas" she would say.

Bex K. November 17, 2013
Tupperware has a pie crust recipe that you shake in a tupperware bowl (from the 70's)

SEASPRAY November 17, 2013
My go to pie crust recipe is using lard instead of butter, so flaky

laci S. November 15, 2013
dorie greenspan has been pretty dang good to me!

bodhi_lisa November 14, 2013
America's Test Kitchen's Foolproof Pie Dough has worked for me. Vodka instead of water is used.

sarabclever November 14, 2013
I've been using the chez pim recipe. But always all butter (maybe some lard)--no margarine for me.

Melissa E. November 14, 2013
My grandmother's recipe from Mexico which is mainly used for super flaky empanadas.

Tenaya November 13, 2013
I always use Alice Water's crust from the Art of Simple Food. It's just butter, flour, salt and water, but the addition of cider vinegar sounds like an amazing idea!

hemlockcreek November 13, 2013
the delux butter crust recipe from the joy of cooking - with local butter and local half-white flour

Lil R. November 13, 2013
I use both Martha Stewarts pate brisee and a whole wheat recipe from Hungry Tigress. Love them both.