A Cake for Rancho Park 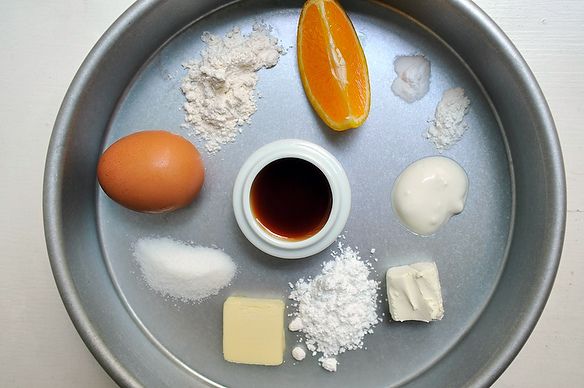 Sometimes even during the week, you want your food to be widely shared. Pioneer-Style Orange Cake took a walk around my west Los Angeles neighborhood, and left a wake of bliss along the street.

It all started because my friend Christine was visiting from New York, and I wanted to whip up a dessert that would both impress her with its beauty and yet fool her with its ease.

So there we stood in the fading afternoon light of my kitchen, talking about all the people at work whose management style we deeply admire as I dropped my super-soft-from-sitting-on-the-counter-all-week Plugra butter and sugar casually into my mixer. (The point of this cake is to mix it by hand, as Giulia Melucci makes clear. You can do that if you wish or must, but not much will tear me away from my KitchenAid.)

Then, I realized I had no eggs. So I sent the incipient vegetarian next door to borrow two as I zested my oranges into the batter. She returned, and I moved on to the rest of the ingredients. I greased up my pan and tossed it all together and moved it into the oven, where it was promptly forgotten for a half hour.

As it cooled, I mixed up the frosting, a cheerful blend of both cream cheese and sour cream and powdered sugar, a first for me as a blend for frosting.

The joy of this cake, beyond its ease, is that it is intensely orange-y, right down to its color, and incredibly moist. Something about cakes with sour cream always seem to come out of the oven more perfectly than those that rely on butter, as Giulia no doubt knows.

So first Christine and I dug in. Ummm. So much fresh orange.

She wanted a second piece. I am momentarily stymied, having lived in Los Angeles for four years where eating dessert is often viewed as a failure of courage. I regrouped, and sliced us both another wedge. Then, I gave half to the neighbor to the east, because I am always leaving my younger child at her house and forgetting her for a few hours. I walked across the street, carrying the remaining cake, to ask the neighbor to the south a question, and her youngest child, face still covered in cookie crumbs from her own dessert, begged for a slice.

The remaining hunk – two large pieces worth -- went to the neighbor to the west, who gave me the eggs. An email arrived ten minutes later: “I ate the whole thing. Could not stop.”

I would love to tell you how this cakes tastes on day two. Sadly, there is not a crumb left.

jmnookin July 4, 2010
I can definitely attest to the orange deliciousness of this cake. (And so could my husband and daughter, both of whom went for seconds. . .).

Jestei July 4, 2010
Ms. Mnookin, I will overlook your obvious bias stemming from having consumed this at my dining room table (yes I made it twice in one week SUE ME) and just say thank you!!

Kelsey B. July 1, 2010
I love easy cakes like this, they are always the best! You have some lucky neighbors!

Jestei July 4, 2010
I hope you make it! I feel the need to use this space to make one point: a friend in Washington made this cake and said that while it was delicious, it overflowed a bit into his oven. I used my deeper 8 inch cake pan for this and I suggest all of you do the same if you have one.

MissGinsu June 28, 2010
Oh! I love citrus cakes! I'm favorite-ing this post haste and will make it as soon as the weather cools off enough to justify turning on the oven.

Teri June 28, 2010
Orange food is the best. How do you think this cake would hold up without the frosting? Or with a orange sugar glaze instead?

Jestei June 29, 2010
I think it would be less tangy without the frosting which is part of the charm. If you wanted to skip that part I think I would dust it with powdered sugar instead.

Jestei June 29, 2010
Oh good!. Is it like the military wife cookbook recipes?

aargersi June 29, 2010
Not exactly! I had to go get one out - this one is from the officer's wives ... some of the recipes actually look pretty good, though the photos are startling (think marachino cherries and almond slices arranged on a whipped cream covered angelfood cake). There is an orange date cake that looks right tasty ... I may have to try some of these!

AntoniaJames June 28, 2010
Yummm. Love the recipe, love the story. Have saved to my recipes, and definitely plan to make it. ;o)