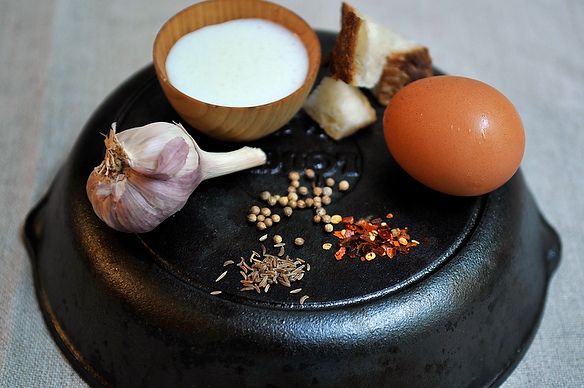 What do you do when you’re lonely, or down in the dumps, or preparing to move across the country to a city where they almost certainly do not have birds of paradise bushes in front lawns or hummingbirds (at least none you’ve ever seen, except once and it turned out it was a mosquito)?

Do you fry things? You might. I did. It turned out pretty well, too. As a rule I am not a big fryer. It makes a mess for one thing, and I don’t need more of those in my kitchen. Further, I have yet to really master a technique -- or maybe it's about owning the right stove or pan -- that can crisp the skin nicely without burning it, yet not leave my chicken raw inside. But I came as close as I have to this victory with Harissa Fried Chicken, which happens to be week night friendly to boot.

Here are the keys to this chicken’s success. The first is the brine. Nothing fancy there, but I do believe it greatly improves your chance of a moist meal. Next is the batter ChezUs has put together for you, which is way beyond the old flour and egg routine. We’re talking red pepper flakes, for a kick, coriander, which gives it a subtle Moroccan thing, and the under-appreciated caraway seeds, which really serve as something special in the finish of each bite.

I did my best to carefully monitor the heat, trying to get a nice just-done inside while maintaining a crisp but not blackened skin. All I can say is, pay attention. Not risotto attention, maybe, but good enough; read your horoscope or something, then peek back and adjust the flame.

As I fried away in grapeseed oil -- something else I have never done, and it makes less mess and makes me feel like an upstanding member of some community I actually don’t belong to -- my friend David stopped by for lunch. "It’s probably not cooked inside," I mumbled sullenly. "Yes! Yes it is, it’s cooked perfectly," he said. Well, one leg was a little too pink. What David loved was the crispiness of the skin, which had a hint of fire and spice without being an overwhelming mouthful of either, or distracting from the taste of chicken. He took it home. It will be fine on the re-heat.

Mix salt and hot water in a very large bowl. Once the salt is dissolved, stir in the cold water. Add the chicken to the brine and put in the refrigerator. Brine the chicken from 1 to 4 hours. After the process is finished, rinse chicken very well and pat dry with paper towels.
Frying the Chicken:

1. Combine flour, breadcrumbs and spices in a deep shallow bowl or plate.

2. Combine buttermilk and eggs and whisk together until blended, also in a deep shallow bowl or plate.

3. Heat about 1/2 an inch of grapeseed oil in a deep frying pan or cast iron pan, until hot. I used a cast iron dutch oven.

4. Dip each chicken piece into the buttermilk mixture and then into the breadcrumb mixture. Gently shake off any excess. Gently fry in the hot oil until golden brown and cooked through.

5. Put in the oven, on low heat (about 350 degrees) to keep warm while cooking the rest of the chicken.

Kelsey B. July 21, 2010
I am not much of a fryer either, but after this testimony maybe I'll give it a try. I might skip the horoscope part the first time though, so I don't burn down the kitchen!

Rhonda35 July 20, 2010
There's nothing quite like DC when the cherry trees are in bloom! It's a fantastic city - wonderful restaurants, interesting inhabitants (hardly anyone is actually FROM there - so you get all sorts of influences, accents, viewpoints), beautiful cityscapes, good schools for the most part, FREE museums, only an hour or two from mountains or beaches or farmland or my house! Oh! And DC has all the traffic of LA but without the smog! :-) You're gonna love it - when do you arrive?? (P.S. there are birds, too - even hummingbirds - just put out a fuschia plant or a feeder.)

Looking forward to trying this fried chicken. I, too, am not much of a fryer - I always get spattered with hot oil, which sucks.

Jestei July 22, 2010
i know what you mean about frying. i keep it to a min. and yes i know the pro DC crowd has been weighing in heavily. i will just have to adjust to leaving my beloved socal!

mrslarkin July 19, 2010
Thanks for another great recipe, Jenny. Don't fret...we've got pretty flowers on the East coast and hummingbirds, too.

Midge July 19, 2010
Thanks, Jenny. You've given me inspiration to try this, once things cool off. And take heart, I've seen a few hummingbirds in and around DC..

Jestei July 19, 2010
Please post how you make out with your skin; I am super curious!