The frittata is such a team player -- give it your scraps, your hodgepodge, your leftovers yearning to breathe free, then give it eggs, and it will give you dinner. It has the comfort and routine of an old friendship, but -- like all things that are eaten in slice form -- still feels civilized, pragmatic, composed.

This one is spruced up with heaps of mustard greens, which have the weight of winter and the headiness of spring. And because the only thing better than an egg dinner is a potato-and-egg dinner, potatoes join the party, shedding the mayo of salads past and clinging to fresh herbs and a snappy citrus vinaigrette. It's a dinner that doesn't ask much of you, but one that will make you proud once it's on your plate. And, if you're still not sold (why aren't you?), know this: What you don't polish off tonight will be even better tomorrow at lunch. 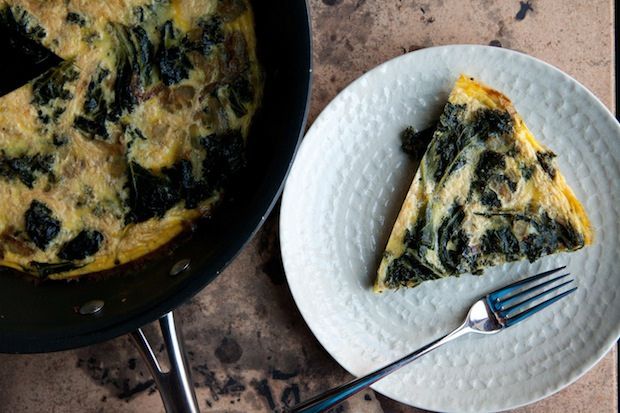 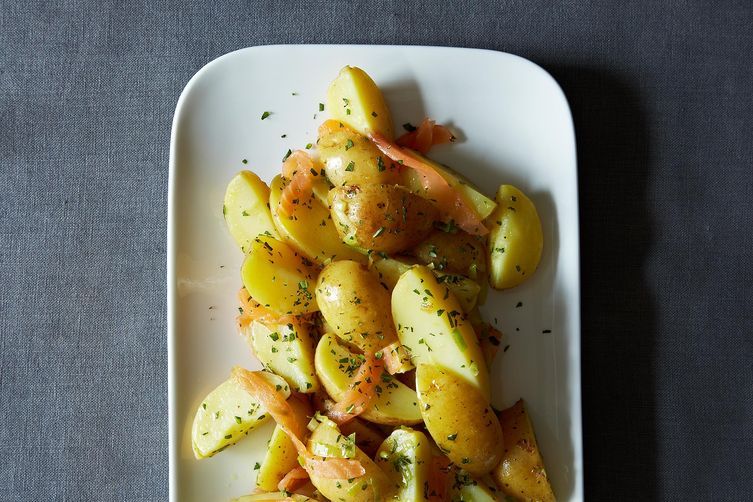 We assume you have olive oil, garlic, an onion, a lemon, red pepper flakes, sea salt, and black pepper. If not, add those to your grocery list!

1. Place the potatoes in a large pot of water and bring to a boil. Cook, uncovered, until tender and easily pierced through with a knife, about 20 to 25 minutes. Drain the cooked potatoes in a colander, cover with a dishtowel, and allow to steam for 5 to 10 minutes.

2. Meanwhile, heat 2 tablespoons of olive oil in a large (about 12-inch) skillet over medium-high heat. When the oil is shimmering, stir in one thinly sliced onion, 2 cloves of thinly sliced garlic, and a pinch of red pepper flakes. Cook, stirring occasionally, until the onion is softened and translucent, about 5 minutes.

3. Stir in 1 teaspoon of lemon juice and the chopped greens. Add a tablespoon of water if there isn't much clinging to the greens. Cover the pan tightly and turn the heat to medium-low. Keep covered and cook, stirring occasionally, until the greens are soft and yielding, 20 to 30 minutes. Season with salt and pepper to taste.

4. While the greens braise, make the vinaigrette for the potato salad by zesting half of a lemon into a bowl. Add the rest of the juice from that half, along with 1/2 teaspoon sea salt and a bit of freshly ground black pepper. Slowly drizzle in 1/4 cup olive oil while continuously whisking until the vinaigrette is emulsified. Taste and adjust the seasoning, adding more lemon juice if necessary.

5. Turn your broiler to high. In a large bowl, whisk together the eggs with a few pinches of salt and pepper. Uncover the greens and pour the eggs gently over them. Cook uncovered until the edges of the frittata are set, about 5 minutes. Then, transfer the pan to the oven and broil until the top is lightly browned and set, another 3 minutes or so.

6. Toss the cooked potatoes and sliced spring onions in the vinaigrette with half of the chopped tarragon. Arrange the potato salad on a platter. Slice the smoked salmon into bite-sized ribbons and place it atop the potato salad. Sprinkle it with the rest of the chopped tarragon. Divide onto plates and serve with crème fraîche or sour cream and a hearty slice of frittata.