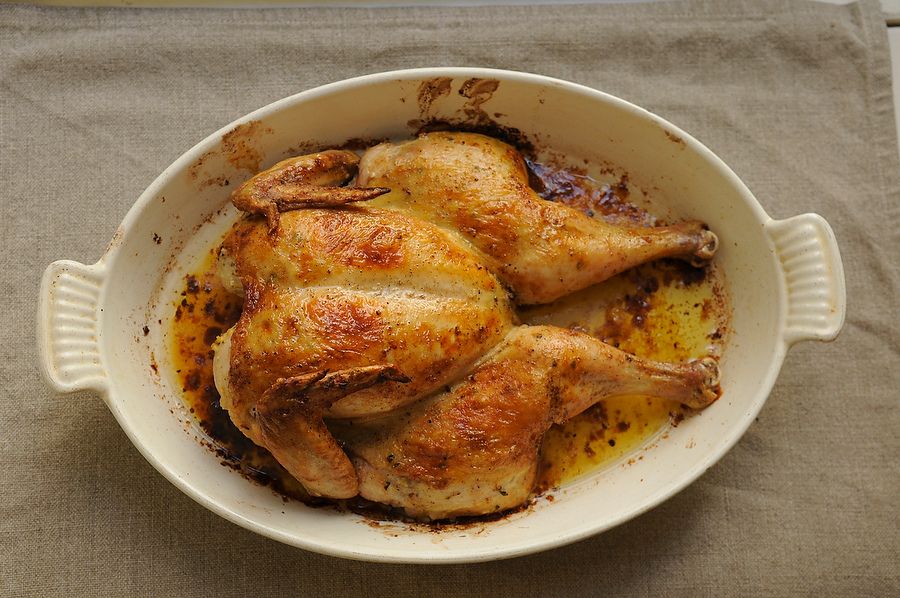 As it does in the majority of households across the country, roast chicken makes frequent appearances at our dinner table -- it's quick, it's comforting, and leftovers are always welcome. Like many people, I have a default method. Mine involves smearing an herby, garlicky butter under the skin, so it's in direct contact with the meat. Then, I simply truss and roast at high heat for the first twenty minutes, lowering the oven temperature to 350 to finish.

While this process always results in juicy, tender legs, on one more than one occasion it has failed to yield the same results with the white meat, which remains forlornly attached to the bird, rejected until every last scrap of dark meat has been devoured. For some reason, the other week I decided to spend five extra minutes and spatchcock -- or butterfly -- my bird before applying the usual ministrations. A couple of snips with my kitchen shears, and the backbone was no more. Laid flat in the roasting pan, the breast and legs on an even plane, the chicken cooked in record time. When I cut into the breast, I could immediately see that it was juicy and succulent. For the first time in a long time, I chose white meat instead of dark.

1. In a small bowl, combine the butter, lemon zest, garlic, thyme, mustard, a teaspoon of salt and some pepper. Set aside.

2. Remove the gizzards from the chicken and discard. Pat the chicken dry with paper towels and set it on a cutting board. Flip it onto its breast and using sturdy kitchen shears, remove the backbone by cutting carefully down each side of the bone, starting at the tail end of the bird. The entire inside of the chicken should be exposed when you’re finished.

3. Sprinkle the cavity thoroughly with salt and pepper, and then flip the chicken over so that it lies flat. Trim any excess deposits of fat from around the cavity, and gently slide your fingers under the skin and ease it away from the meat, around both sides of the breast and both legs. Carefully smear the compound butter underneath the skin all over the meat, being careful not to break the skin. Reserve about a tablespoon of the butter, and then spread that evenly over the skin, followed by a generous sprinkling of salt and pepper.

4. Lay the chicken in a shallow roasting pan just large enough to accommodate it and put in the refrigerator for an hour or two (this will help the skin crisp more when you cook it).

5. When you’re ready to make dinner, heat the oven to 425 degrees and remove the chicken from the fridge. Roast for 20 minutes, then baste and decrease heat to 375. Cook for another 15 to 20 minutes, basting once again in the middle, until cooked. Let the chicken sit for a few minutes before carving; serve with the pan juices and some crusty bread or roasted potatoes for sopping them up.

Big F. September 1, 2013
Going to try this out tomorrow - I've been looking to try this method for quite some time now, but am finally going to wield the kitchen shears and try it out! :)

liamoran August 8, 2010
Can't wait to try it. I've gotten really good at cleaning chicken, so this should be doable. Thanks for sharing!

terryslo August 8, 2010
Beautiful chicken! I have been using Jen and Mike's (Last Night's Dinner) leapfrog method with the Judy/Zuni Dry Brine and high heat cooking with excellent results. I guess my oven should be a touch cleaner, but I get a very subtle smokiness with the high (425) heat cook that is great.

Federico_ August 8, 2010
Whether you spatchcook or simply roast chicken whole, I agree with fglick that the best way to assure a crisp skin and a moist inside is to dry the bird throroughly, then roast it at a high temperature and turn it in about a half hour. If you have a convected oven, using it for the first 20 minutes or so will cook it even quicker and make the skin even crispier. I learned this from Judy Rodger's wonderful Zuni Cafe cookbook where the complete recipe is on p. 342

pierino August 8, 2010
I'm down with anything Judy Rodgers says especially when it comes to chicken. But the quality of the chicken matters too. I personally like the air chiled chickens at Whole Foods---you are not paying for excess water weight. And Paula Wolfert commented, "I'd rather be a force fed duck than a Zacky chicken." So eat your foie gras too.

fglick August 8, 2010
I have found that the fastest way to roast chicken is as follows: I start with a rinsed and dry kosher organic chicken ( eliminates brining) and place it breast down on a rack in a roasting pan. I throw in cut potatoes and onions in the pan. I cook the chicken at 450-500 (oven must be clean or it will smoke) for 20 minutes and then flip it to its back for another 20 minutes. The chicken is juicy, the skin is crisp and everyone fights over the caramelized onions and potatoes.

J-Dizzle August 4, 2010
Mmmmmm, used to spatchcock chicken routinely for dinners/barbeques...but haven't done so in quite awhile. After drooling over your photo, I am definitley buying an organic chicken this weekend to 'truss up'.....love the addition of Dijon mustard to the compound butter...Mmmmm! Thank you for the recipe Merrill! Cheers...

pierino August 3, 2010
Grilling dispatchcocked poussins is a great way to go. In fact I think I turned in a recipe for that... This is an easy technique that every serious home cook should master. Steve Raichlin has diagrammed steps in his "Barbecue! Bible" for those who are curious. If you do grill, don't make the amateur mistake of flipping it constantly. It shouldn't be turned more than once.

Kelsey B. August 3, 2010
Nigella introduced me to this technique (her book, not in person) and I've done it a few times, you are right it is great! It is fun to say, but more fun to eat!

mrslarkin August 3, 2010
Roast chicken is my favorite meal. Thanks for this version, Merrill!

lastnightsdinner August 3, 2010
Mike often uses a technique called the "leaping frog" that Maricel Presilla introduced in Gourmet magazine - you make a few simple cuts, you retain the backbone, oysters, and crispy "chicken butt", and you end up with chicken that is perfectly cooked throughout. He wrote it up here: http://www.lastnightsdinner.net/2009/06/10/how-funky-is-your-chicken/

And now you've got me craving roast chicken :)

mrslarkin August 3, 2010
Now THAT is one funky chicken! I love it. And those crispy bits and oysters are what I dive into first every time.

EmilyC August 3, 2010
I've spatchcocked chicken before, but for some reason, I haven't done so in over a year. Your post (and the beautiful photo) has inspired me to get out the kitchen shears and spatchcock away!

melissav August 3, 2010
Butterflied chicken is the best. Sometimes I sear it on the stovetop in a large oven proof skillet with a little butter or oil for 3-4 minutes, flip it over, and place in the oven to roast. You get extra crunchy skin this way. The compound butter sounds lovely. I like the addition of dijon. I'm going to try that next time.

Merrill S. August 3, 2010
I'll have to try that technique. There are certain people in my house who are addicted to crispy chicken skin -- if happen to I turn my back once the chicken is out of the oven, I often return to find a completely naked bird!

mariaraynal August 3, 2010
Why have I not tried this yet? Love the technique and the ministrations. : )

dymnyno August 3, 2010
Totally agree!! No one fights over the back anyway.

drbabs August 3, 2010
This is my favorite way to cook chicken, too! It also makes for fast grilling--you lay a baking sheet on top and weight it down with some tiles and grill over indirect heat. You can grill a whole chicken in about half an hour (15 minutes per side). Yum!!

Merrill S. August 3, 2010
I've always wanted to grill a spatchcocked chicken but never have -- Nigella Lawson does it in Nigella Bites, and I'm always envious when I look at the photo.