Today: Emily throws a beet in a blender, and something wonderful comes out. 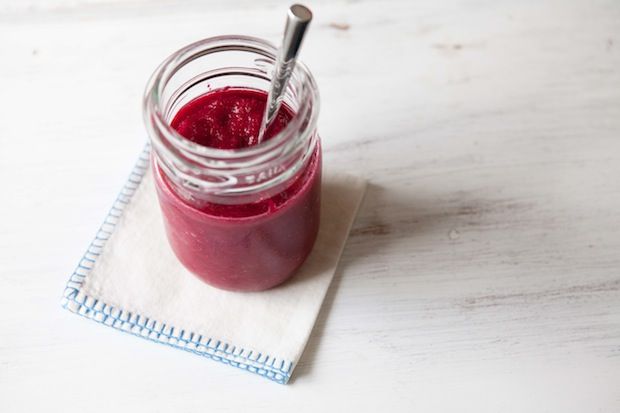 I have always been vehemently opposed, on principle, to smoothies and juices with vegetables in them. I don’t have any good reason for being so vehement. I have just had a vague sentiment of preferring to eat my food and drink my drinks and not confuse the two (except in milkshakes, which are perfect, but happen to be a combination food-drink) -- but it wasn’t a strong enough sentiment to justify why I was so opposed. So it’s not very inconsistent of me to have suddenly decided a couple of days ago that I might like smoothies and juices with vegetables in them, is it?

What can I say? I woke up one morning feeling like having juice that had celery in it. So I did. And it wasn’t bad. Then the other day, I was at a work planning meeting, and one of our new employees was drinking such a pretty pink smoothie that I am proud to say I derailed the whole meeting for 15 minutes in order to discuss smoothies and get her recipe. She said it was a beet smoothie, and that when she gets fresh beets, she grates them and keeps them in the refrigerator to put in smoothies to which she also adds berries and a mild flavored liquid like apple juice or coconut water.

I was inspired to throw a beet in my own blender. I added some frozen strawberries as well as a good chunk of ginger and a squeeze of lemon juice. The funny thing about drinking a beet smoothie, it turns out, is that it looks so vibrantly pink, it convinces you that it’s going to taste sweet and fruity, something like raspberry sorbet. So when you go in for a sip, even though you know it’s a beet smoothie, it is slightly shocking that it tastes earthy and only mildly sweet with a gentle tingle from the ginger. But then you have another sip, and another, and your brain wraps itself around the whole beet-in-a-smoothie thing, and it becomes quite enjoyable. Yup, I think I kind of like drinking vegetables. 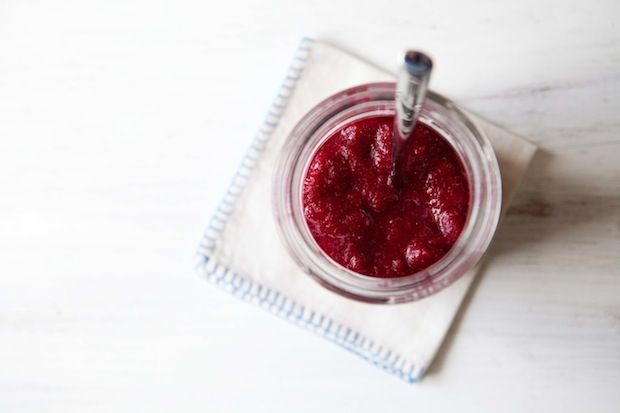 CarlaCooks June 2, 2014
I made a smoothie for breakfast every morning for my husband and myself. Using a strong blender (I have a MagiMix), I add 1 1/2 cup rice milk and 1 heaping spoon of chia seeds. I let that sit while I prepare the rest of the smoothie ingredients (you need to let the chia absorb some of the liquid). I roughly chop 1 apple, 1 or 2 celery stalks, a good-sized knob of ginger, 1 or 2 carrots, a 4 inch section of cucumber, and 1 beet. Before adding these chopped items to the blended, I add a heaping spoon of ground psyllium husk to the chia/rice milk. In go the chopped items, plus a handful or two of fresh spinach, plus a bit of whatever fruit I have lying around (1 kiwi, or a handful of frozen strawberries, raspberries, or blueberries, or half of a banana). I blend it and keep it in the fridge until breakfast time. The smoothie is great: super healthy, tasty, and it keeps us full until lunch time.

Kate V. May 29, 2014
Ah i love beet everything - this looks like a perfect start for a sluggish day - definitely giving this a whirl tomorrow morning. thanks!

fiveandspice May 30, 2014
Between the beer and the ginger, it'll definitely perk you up! :)

fiveandspice May 30, 2014
Beet, not beer! My phone keeps autocorrecting to beer, haha. I'm not yet into beer in the morning.

breakbread May 29, 2014
I second the recommendation for Westford Hill Distillers in Ashford, CT. Check out Rime Vodka - organic vodka! Very smooth and clean.
I have lots of beet plants in my garden. Looking forward to a full harvest.

fiveandspice May 30, 2014
Definitely checking them out. Thanks for the tip.

LauriL May 29, 2014
Speaking of craft distillery....look up WestfordHill Distillers in Ashford , Ct...they've got it down ( and then some)...and were in and on it years ago. BTW...definitely sipping on this soon!

Jackie P. May 29, 2014
I recently had a strawberry-grapefruit smoothie I liked and am now wondering about adding beets. I also happen to have a big bag of frozen dark cherries that may need to be added as well. Hm.

Liz B. May 29, 2014
I'm skeptical. While beet juice and beets in general are totally my fav, I've NEVER had a good beet smoothie. I'd advise anyone making this to make beets the minority ingredient in the extreme; they really do cut down any other sweet ingredients by around 75%.

fiveandspice May 30, 2014
It is definitely pretty beet-y. But I kind of figured, why make a beet smoothie and then cover up the beets?! I liked it this way, but you can definitely adjust to your taste!