Days are growing longer, nights are shortening, and paces are slowing to a steady cadence. Tonight we'll take the season’s cue and spend ample time outdoors, savoring the leisure of summer nights. Suitably, tonight's dinner begins outside of the kitchen -- with conversations over the seafood counter and a careful perusing of crates of asparagus to select the plumpest, thickest spears. We’ll take our time, as these ingredients require little preparation once in the kitchen. Here, the fish gets a light dusting of seasoning and flour before a quick sear in the skillet, while the asparagus mellows and sweetens as its braised with fresh herbs. Carry it all outside, pour glasses of Sancerre, and herald the arrival of summer. 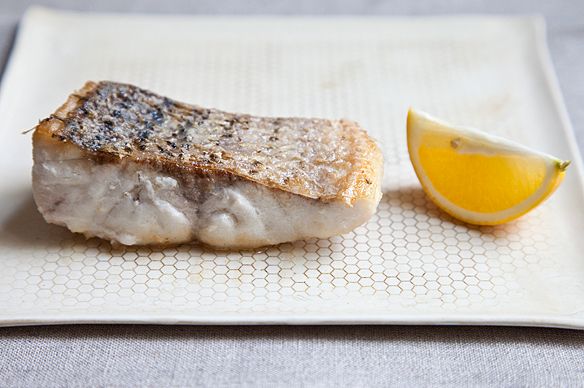 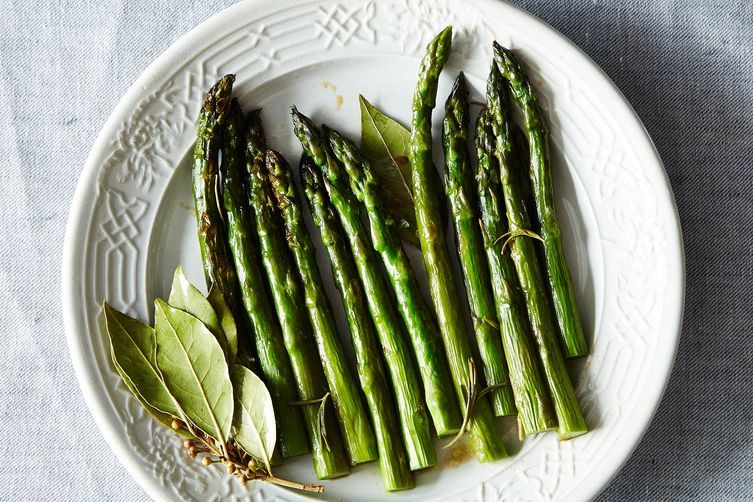 We're assuming you have canola oil, olive oil, sea salt, and pepper. If not, be sure to add those to your list, too.

2. Prep the ingredients: Rinse the asparagus and trim the tough ends. Season the fish on both sides with sea salt and pepper and dust with Wondra flour. Blow off excess and set aside.

3. Start the asparagus: In a skillet large enough to hold the asparagus in a single layer, combine the asparagus spears with one tablespoon olive oil, one teaspoon sea salt, several sprigs of rosemary, and several bay leaves. Sprinkle with several tablespoons of cold water, enough to cover the asparagus by about one third. Cover. Cook over high heat just until the oil and water mixture begins to sizzle.

4. Braise the asparagus: Reduce the heat to medium and braise the asparagus, turning from time to time (leave the lid off or ajar -- by the time the asparagus is tender, the liquid should have cooked off), just until the vegetable begins to brown in spots, 8 to 10 minutes (depending on the thickness of the asparagus).

5. Cook the fish: While the asparagus is braising, heat canola oil (enough to coat the bottom of the pan) in a large, oven- and flame-proof sauté pan on the stovetop until the oil is very hot, but not smoking. Put the seasoned fish in the pan, skin side-down, and press down on the fish with a spatula. (The skin immediately contracts and buckles, but you want to keep it all in contact with the pan for maximum crisping.) Sear on the stovetop over medium heat until golden brown on the bottom, about 3 minutes. Turn the fish over, put the pan in the oven, and cook another 2 to 3 minutes, until a metal skewer can be easily inserted into the center of the fillet and, if left for 5 seconds, feels just warm when touched to your lip.

6. Serve both braised asparagus and the fish immediately.

Josie M. June 3, 2014
I use that braising/searing technique all the time for broccoli and green beans... never thought to use it for asparagus. Thank you!

Allyn June 3, 2014
We did bacon wrapped cod with rosemary and roasted asparagus the other night. But seriously, you just can't go wrong with anything from Le Bernardin