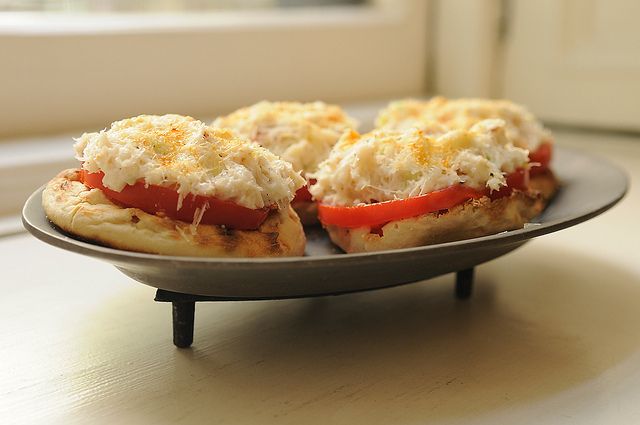 Up in Maine, we're lucky to have access to all sorts of great local seafood. While Maine lobster tends to get the most press, my family is pretty addicted to Peekytoe -- also known as bay, or rock -- crab, which is actually a by-product of the lobster fishing industry (they get caught in the traps). We regularly have the "toasties" below for lunch, out on the front porch overlooking the ocean. They're nothing fancy, but that's mainly because we know better than to mess too much with the crabmeat, which is best left to shine on its own.

* Note: Although I call for Parmesan here, my mother (Veronica) would like it known that she prefers sharp white cheddar. I'll leave it up to you!

1. Slice the tomatoes about 1/4-inch thick and arrange in one layer on paper towels to get rid of some of the moisture (you can remove the seeds if you're feeling really motivated). Cover with another layer of paper towels, pressing gently, and let them sit while you assemble the rest of the ingredients for the toasties.
2. In a medium bowl, put the crabmeat, mayonnaise, sour cream, scallions and generous pinches of salt and pepper. Ever so gently, using your fingers, toss the ingredients together until just combined (you still want a few lumps of crabmeat when you're finished).
3. Turn on the broiler and position a rack about five inches below the heating element. Assemble the toasties on a baking sheet: on each toasted English muffin half put one slice of tomato, followed by about a 1/3 cup of crabmeat. Sprinkle the cheese evenly over the top. Broil the toasties for 2 to 3 minutes until the cheese turns golden, watching carefully to make sure the edges of the muffins don't burn. Serve immediately.

chefrockyrd August 30, 2010
Thanks Merrill- Great photo! Downeast Maine crab meat is the fabulous. Whenever we see signs on the road here for "fresh picked crabmeat" I pull the car over! A lot of time its a lobsterman's wife who has started a cottage industry for herself. The lobsterman used to throw them back until some smart dame starting cooking and picking. They now have to do it in a separate place other than the home kitchen. So you will see a small addtion to the house and maybe a propane burner outside to cook the crabs. I am going to town to get some won ton wrappers for crab ravioli today!
from downeast Maine
rockyrd

MTrue August 29, 2010
These look fabulous and sweetly homey. I'm going to try them with Dungeness crab, since I'm out in California. Can't wait till crab season starts here!

TiggyBee August 27, 2010
I made these for dinner tonight...amazing in every way!! Many thanks!

Merrill S. August 27, 2010
Thanks, everyone, for the lovely comments, and sorry I've been MIA this week (post-wedding "mini-moon"). Looking forward to diving back in next week!

lastnightsdinner August 24, 2010
Wow, these look incredible - an elegant spin on a tuna melt if there ever was one!

thirschfeld August 24, 2010
This makes me wish I was on the east coast. It is things like fresh crab, lobster, oysters and such that really make me miss living in NYC. I have been feeling the pangs of solitude or maybe that means fall is on its way.

AntoniaJames August 24, 2010
Well, I'm with the other mothers out there, as I would definitely go with just a touch of sharp white Vermont cheddar. Just love this recipe. What a perfect summer treat. ;o)

Lizthechef August 24, 2010
My Mom would go for the Vt. cheddar too, and loved English muffins. We used to vacation in Grafton and they had a small cheese factory that produced wonderful cheddar.

Sagegreen August 25, 2010
Yes, we really enjoy Grafton cheddar! That is what I will use when I make these great toasties, so much easier than making crabcakes, too.

Kitchen B. August 24, 2010
That is an insaley gorgeous photo - love the stand....one to copy! And this crab toasties are a winner, esp with the base of English muffins. Haven't had crab in ages.....inspired.

MrsWheelbarrow August 24, 2010
My mother would insist on white cheddar, too. Never thought to add tomatoes, but that was obviously a huge mistake! Next time I come across some peekytoe crab, this is first on the must-make list.

dymnyno August 24, 2010
These bring back memories...my mother made these when crab was in season..and so do I...so simple and delicious!

cheese1227 August 24, 2010
Too funny. We call these "crabmeat crabbies" in my family. But they dont typically have tomatoes on them. I will have to try them with the addition.