How to Make a Classic Mai Tai

Today: The history of the mai tai, and how to bring a little tiki to your home bar, tonight. 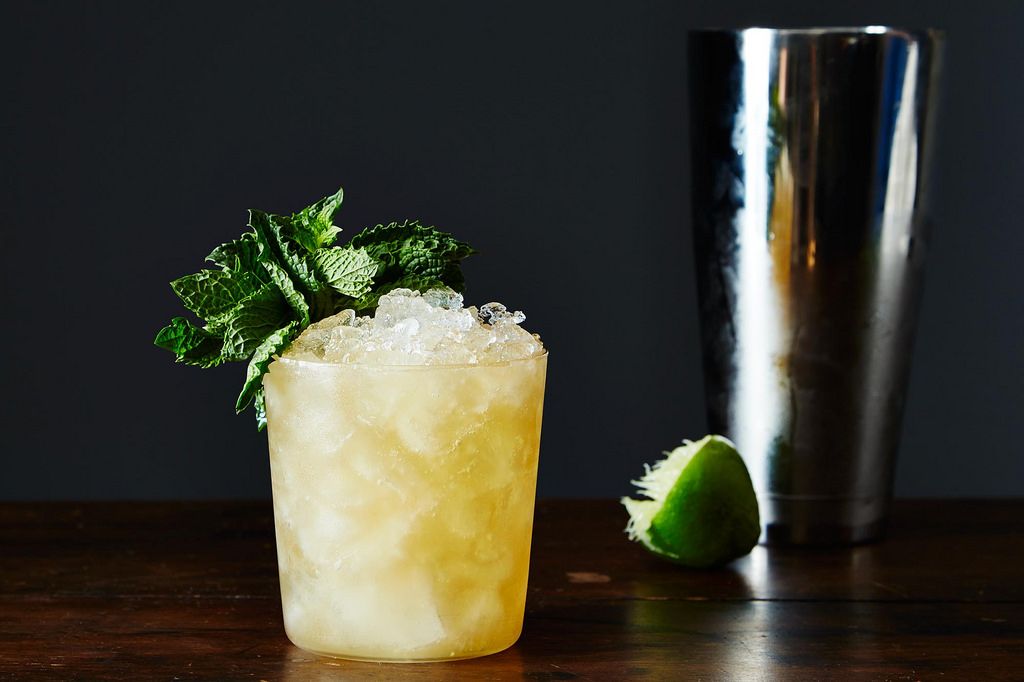 The craft cocktail drinker is equally at home sipping a Negroni during the dusky cocktail hour of an outdoor café, a French 75 at the restaurant bar, or an old fashioned at home after work. But what happens when we begin to push the boundaries? What if we substitute amari with exotic syrups, delicately constructed cocktail glasses with garishly painted ceramic mugs, and finely shaved lemon twists with flaming lime shells? What if we drink tiki?

Tiki is the cure for the elitism -- the idea that a bar is an altar at which supplicants come to worship -- that all too many craft cocktail bars fall prey to. Why is it so successful? Because it’s hard to take yourself too seriously when you’re drinking something festooned with umbrellas, crazy straws, and burning 151-proof rum. And there is no better way to make this happen than with a classic mai tai.

In 1934, Victor Bergeron opened a small bar and restaurant in Oakland California named Hinky Dink’s, a ribs-and-hash kind of place that slowly began taking a decidedly tropic turn. A few years later, on one of his research forays, Mr. Bergeron walked into another California tiki establishment, Don the Beachcomber, and had a drink which was rumored to be a QB Cooler: an eminently tropical blend of rums and citrus.

More: You're going to need to practice your mint bouquets. Start with a julep. 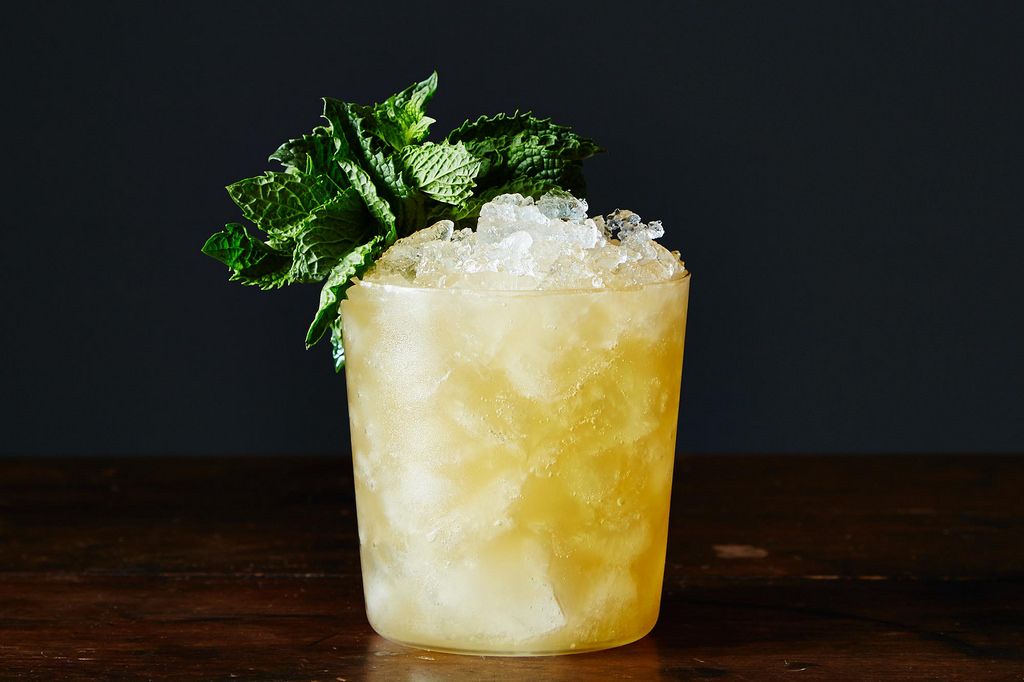 Bergeron went on to reverse-engineer the drink to come up with his own version. He changed the name of Hinky Dink’s to “Vic’s Trading Post” and began telling stories about how he had lost his leg on the South Seas. (In reality, he had lost it to tuberculosis as a child.) He told another story, too: that in 1944, he was sitting down with one of his bartenders and he decided to make the greatest rum drink in the world. The way his story goes, just as he was finalizing his formula, two friends from Tahiti walked in, sampled it, and declared it “Mai tai roa ae,” or, “Out of this world! The best!”

Vic’s Trading Post became simply “Trader Vic’s” and the QB Cooler became the mai tai. Despite the fact that the QB Cooler and the Trader Vic mai tai taste very similar, the only ingredients they share in common are rum and lime juice. Which is why tiki historian Jeff “Beachbum” Berry surmises that the mai tai is indeed an original Trader Vic invention, though inspired by the drink Bergeron tasted at Don the Beachcomber.

Regardless of what you call it, it’s not the insipid frothy pink monstrosity served at all-inclusive resorts across the Caribbean, but rather an intensely tart and nuanced blend of rums, citrus, and flavored syrups. The original mai tai called for a type of aged Jamaican rum that no longer exists: a flavorful, pot-stilled spirit aged for 10 years in wood. To approximate that flavor, you can mix rhum agricole -- a funky result of sugar cane juice distillation from Martinique (this and this are both great options) -- with a mellow dark Jamaican rum like Coruba.

Don’t spare the garnish on this one. When you’re juicing your limes for the cocktail, save the empty lime halves as garnish for your drink, or go nuts with edible flowers, mint bouquets, and/or tiny paper umbrellas. This is tiki: The sillier it looks, the more fun you’ll have.

Ann July 13, 2014
Check out the recipe for the truly classic Mai Tai served at the Mai Tai Bar at The Royal Hawaiian hotel in Honolulu since 1954!

Sarah J. July 10, 2014
Can I substitute something for the rhum agricole?

Erik L. July 11, 2014
Sarah, a really good funky Jamaican Rum like Smith & Cross would do the trick. Although it wont have QUITE the complexity that Rhum Agricole will, it will certainly not disappoint.

rsimpson3 July 11, 2014
For years, I used St. James as the Martinique rhum agricole,in a mai tai. Now they don't distribute in the U.S. Haitian rhum agricoles, while very fine, just aren't the same as ones from Martinique in a mai tai. I was very excited to see Smith and Cross recommended as a substitute until I visited my favorite liquor store only to have my memory jogged and to recall that Smith and Cross' 151 proof rum is rum's answer to Everclear. I'm assuming that you are recommending a lesser proof bottling of Smith and Cross? Therein maybe the problem of recommending rums: the distribution of rum in the U.S. is somewhat less than nationwide in many cases.

Erik L. July 11, 2014
The Smith & Cross I am recommending is around 114 proof, about 57% alcohol by volume. While overproof, it is by no means comparable to any 151 proof rums and certainly not to everclear, which is an eye watering 190 proof. It is a navy strength pot stilled Jamaican rum and as such is perfectly suited to tiki drinks, many of which we're developed with exactly that style of rum. Give it a try!

Andie July 10, 2014
What if you used store bought orgeat? Do you think it would still create a drink that looks as delicious as the one photographed? Making the orgeat sounds like long process.

rsimpson3 July 11, 2014
I'm very happy to see that Erik linked to an orgeat recipe calling for bitter almonds; most call for "regular" almonds. Having tried many recipes for DIY orgeat (including the one from Beachbum Berry Remixed), I have to say that the best orgeat for a mai tai is, hands down, Kevin Liu's recipe. It also happens to be the simplest, easiest recipe one could ever dream of. It's based on using store-bought almond milk which is made from bitter almonds. The trick is to find a brand that is as free from additives as possible. Kevin recommends Pacific, which seems to be available nationwide. Diamond works well, too. I've also found very good regional brands, as well. Here's the recipe: http://craftcocktailsathome.com/2013/04/a-blasphemously-easy-recipe-for-the-best-homemade-orgeat/

Kenzi W. July 11, 2014
A few brands I'd recommend, if you don't want to make your own, are Small Hand Foods, B.G. Reynolds, and anything from Brooklyn Orgeat Works.

Andie July 11, 2014
Thank you for your suggestions Kenzi. If I make them I'll be sure to post how it goes or instagram a picture for Food52!

mrslarkin July 10, 2014
My vintage paper umbrellas would be perfect with this. And now I can't find them. :(

ChefJune July 10, 2014
Mmmmmmm, Mai Tai! One of the only cocktails I indulge in. What is "Pineapple gomme" syrup, and where would one find it? OR, how does one make it?

Kenzi W. July 10, 2014
It's almost like a slightly more textural simple syrup. We're about to launch some in Provisions, but in the meantime, swap that extra 1/4 ounce for more orgeat.

Andie July 10, 2014
From what I looked up isn't it loosely a pineapple simple syrup?

Kenzi W. July 10, 2014
It's very close, yes -- same idea with the sweetness, but gomme (or gum) has a little bit of a creamier texture. Both would work here!

Andie July 10, 2014
I see, thank you for clarifying. I look forward to seeing it on provisions and trying this drink at home! Cheers

Kenzi W. August 8, 2014
It's live! In case you're still itching for a Mai Tai made this way: https://food52.com/provisions/products/1414-liber-co-pineapple-gum-syrup-texas-grapefruit-shrub

Marian B. July 10, 2014
After this, I'm officially on team tiki. Now I just need to go buy some paper umbrellas.