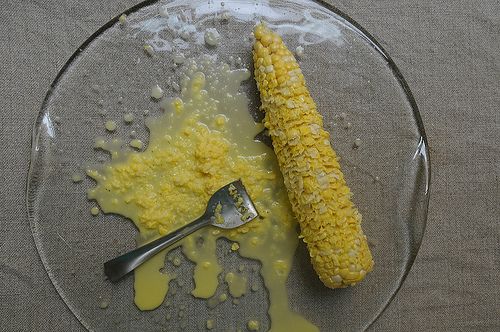 I am sure I will raise corn purists' hackles with this recipe but what fun is it to bow to tradition all the time? I’ve made corn pudding with corn pulp and juices, cream and nothing else but a pinch of salt, and the resulting dish was a fine one, a recipe I’ll make for as many seasons of corn as I live to see.

This summer, though, I decided to mix it up with a little onion and poblano pepper. And there’s nothing you can do about it (except complain in the comments section!).

Good corn pudding, pure or not, is nearly impossible to make without a $3 implement called a corn slitter (see above and below). It looks like a medieval torture instrument, and would have made a good one. It has mean teeth on one side for slicing through the kernels, and a concave bar on the other, for running down the side of the slit cob to push out all the pulp and juices.

Old-school cooks, deprived of this luxury gadget, just used the tip of a knife. Some did not live to tell. A box grater is the next best option, but you’ll get the kernels as well as the pulp. Knuckles beware!

Even with the marvelous corn slitter, corn pudding is not something you should do for a crowd or even do very often. It takes time and the pudding to effort ratio is low. But for the few, the proud, the corn-pudding-makers, the once-a-year reward is a delicious reminder that food is a demanding master, and, with effort, the delights are endless, even if short-lived. 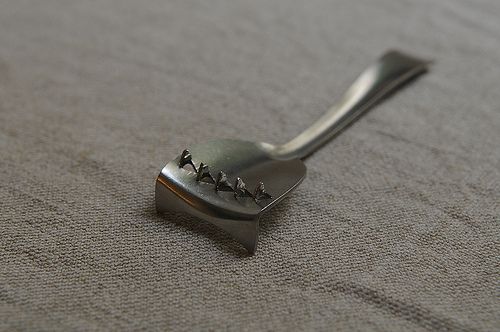 1. Heat the oven to 400 degrees. Pour the oil into a small sauté pan and place over medium heat. Add the onion, poblano pepper, and a healthy pinch of salt. Cook until the onion is softened but not brown.

2. Slit, scrape or grate the pulp and juices from the ears of corn –- and collect into a bowl. You need 4 cups. Add the cream and onion mixture. Season to taste with salt. Pour into a buttered 9-inch round cast-iron skillet or equivalent size baking dish.

3. Bake the pudding until it’s browned on top and loose but no longer watery, about 45 to 60 minutes. Use a slotted spoon for serving.

bolagirl August 29, 2010
As a veteran corn pudding maker (corn pudding for hundreds), we always took the corn off the cob with a serrated bread knife. The corn kernels remain intact rather than turning to mush. Each bite of pudding releases little squirts of corn juice. Yumm.

luckymom August 29, 2010
I have to disagree with most of these instructions. I find that these corn strippers are a waste of money and a waste of corn. Just look at all the corn left on the cob - no wonder the recipe calls for 14 ears of corn to get 4 cups of corn! Two, three or four ears of corn, depending on size, should be all you need to get 4 cups. I have always used a medium sized knife and a casserole dish with a 2-3 inch rim to contain all the corn. After cutting off the kernels I use the blade of the knife and run down the cob to get all the corn juice. This is not a time-consuming dish to make. I do use eggs in my recipe but everything goes in to a food processor for about 10 pulses and into the oven with some extra butter pats on top. Our family has loved this for years!

Lydia August 29, 2010
Would like to send your picture and receipe as well as comments about your corn pudding and slitter to one of my emails since my printer is not working at home. Where can I find a slitter? I have enjoyed receiving emails of your recipes. Aren't you the same Amanda who wrote the book about Cooking for Mr. Latte? I have enjoyed what I read of it and many of the recipes..

Amanda H. August 29, 2010
Yes, same Amanda. Thank you. You can either cut and paste all of the comments and recipe into an email or you can rollover on "Share" (above left, above the word Comments) and you can email the blog post to yourself (but not sure if photos go along with that). For the slitter, there's a link to a place you can buy it (click on the highlighted words "corn slitter) in the third paragraph above). Hope this is helpful!

MrsWheelbarrow August 27, 2010
Looks wonderful. Just one question - which came first, the pudding obsession, or the slitter?

sygyzy August 27, 2010
I've made creamed corn and corn ice cream in the past two weeks and from experience, let me tell you - if you use the back of the knife method, use a large bowl and make sure you are in a well spaced-out area. You will get corn milk all over the place!

Amanda H. August 28, 2010
So funny -- happens with the slitter, too. When I made this the other night, I kept finding bits of corn stuck on my face/neck/arms for hours after. Lovely.

Alms45 August 27, 2010
My family is famous for using this implement and encouraging everyone eating corn with us to use it as well. (Some of us live in Vermont, so there is lots of corn eating.) Though I love the image of Amanda in her basement, bending kitchen objects, in her sparkly red cape, in this case NON!

EmilyNunn August 27, 2010
I stand self-corrected. I just clicked on the corn-slitter link. I still think you wear a cape, though.

EmilyNunn August 27, 2010
My kind of corn pudding. Amanda: I've never seen one of those corn things. I think you have a workshop in your basement, in which you transform everyday items (salad fork) into super-efficient cooking weapons, using a blowtorch. I also believe you wear a cape when you do this.

phyllis August 27, 2010
I'm not a corn purist. I add bacon and red peppers sometimes. Poblanos are a great choice. I'm going to try.

phyllis August 27, 2010
I do add egg when I cook it in the winter with frozen corn, which is remarkably tasty if you use good quality corn--I use a frozen mix of yellow and white, but in the summer, I, too, like it looser.

The E. August 27, 2010
Love the crazy implement. Never seen anything like it. Not a corn pudding fan but love the story and pics all the same!