Today: Holiday gift giving can be overwhelming. Preserve your sanity -- and your lemons -- with a simple yet showstopping recipe.

To make it easy for you, we're giving away a set of green Ball jars. Just tell us what edible gift you'd make in the comments below by Monday, December 1st at 5 PM to win.

Update: Congratulations to Richard Gervase for winning a set of jars -- we're looking forward to hearing his recipe for Italian plum brandy! 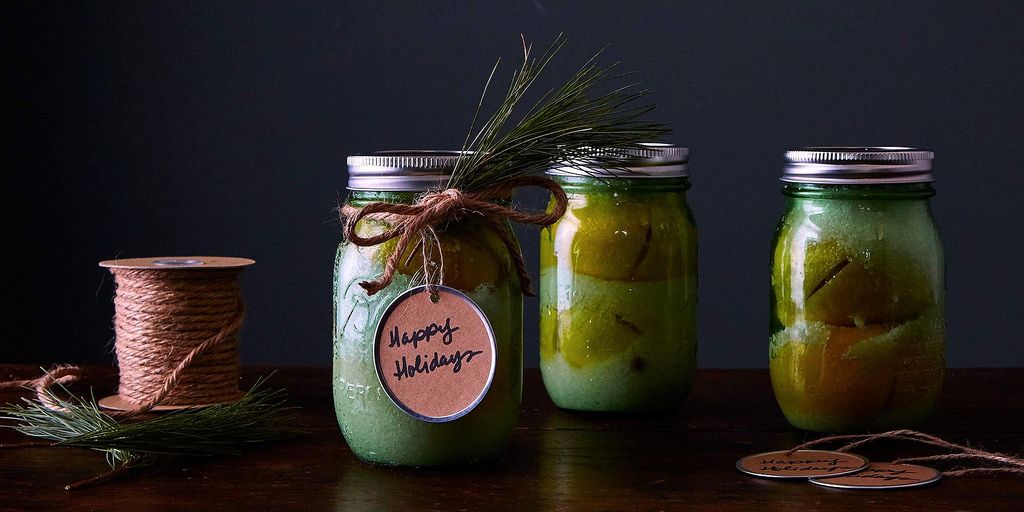 Growing up, my family had a two-tier system for holiday gifts. Acquaintances, far-flung family members, and co-workers got a family Christmas card in the mail. A small circle of close friends and neighbors -- deemed the lucky ones -- got my mother’s freshly baked cinnamon rolls.

Baking her cinnamon rolls is the most coveted gift my mother gives. Everyone appreciates the care and time that goes into making them -- and also that they are just so damn good.

Edible gifts are personal in a way most purchased presents aren't, no matter how thoughtfully chosen. I’ve never attempted to make the famous cinnamon rolls, but I do love to make my own gifts: Peppermint bark and toffee star in my holiday repertoire.

A good edible gift should be easy to ship or carry, it should taste fantastic, and it should be unusual. Our favorite for this year? Preserved lemons.

More: We had an edible gift contest -- and you guys rocked it. 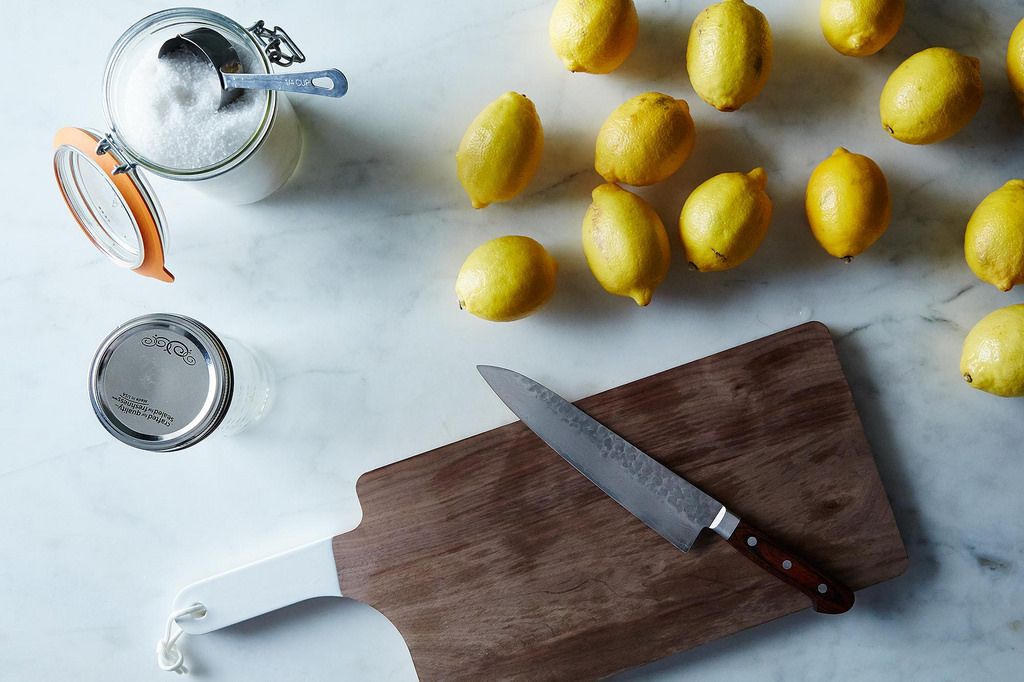 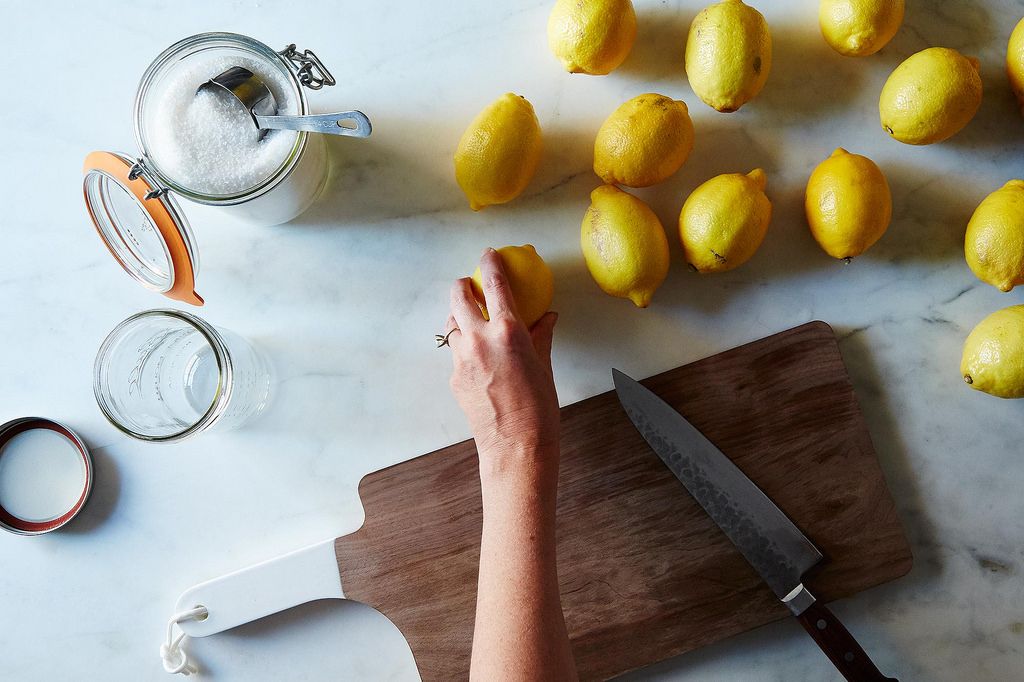 Preserved lemons are the Scotch whiskey of the pantry -- better with age and always welcome at a party. Salt mellows out the sweet, intense citrus flavor and dulls the bitterness of the lemon, and preserving softens the peel so it’s easy to dice and add to everything from mashed potatoes to braised lamb. You’ll traditionally find them in Middle Eastern recipes, but don’t stereotype them as such: Take your cues from their flavor -- salty, slightly-sweet, tangy, citrusy -- and mix them into pasta, toss them with salad, or blend them into guacamole. 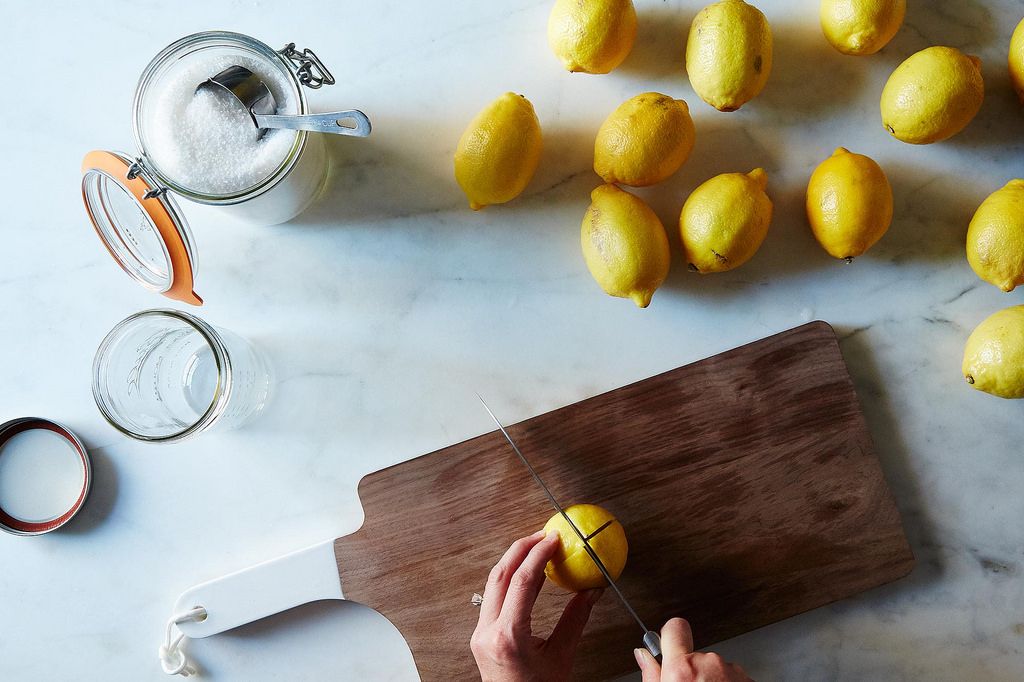 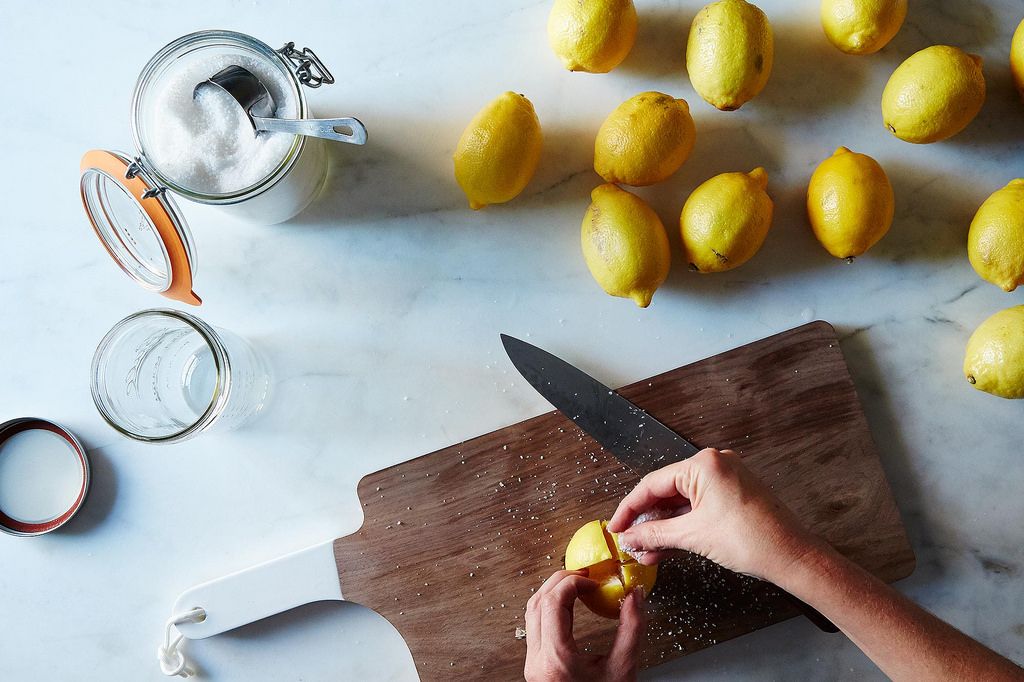 Preserving sounds complicated, right? It’s not: The recipe takes about 10 minutes and the only skill required is slicing citrus. This is an everyman's recipe that yields impressively fancy-looking results (a win-win!). 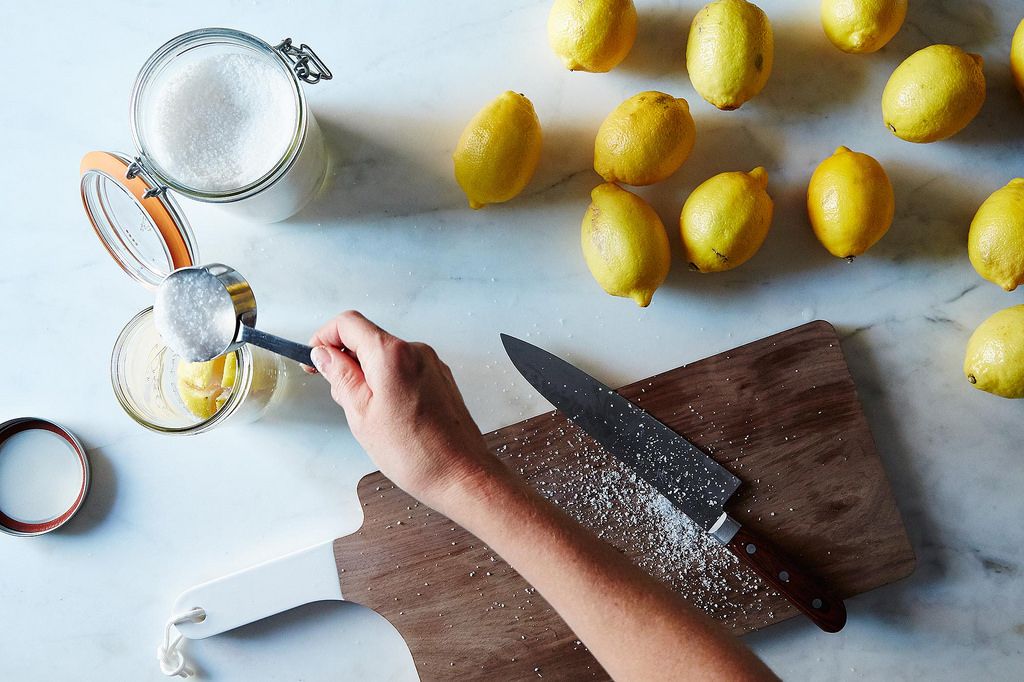 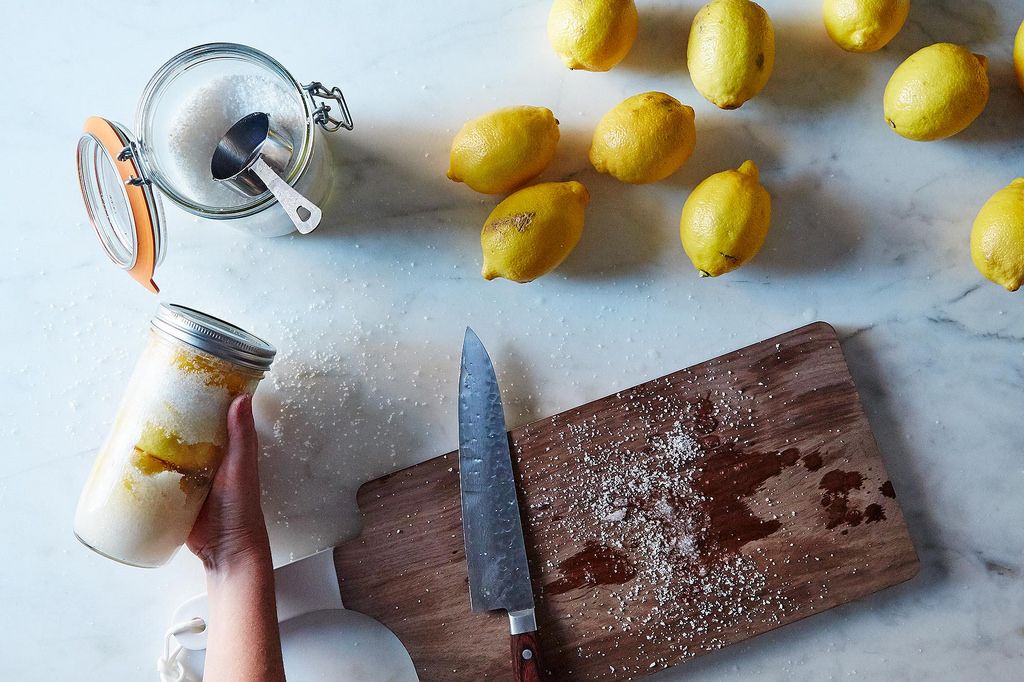 The method is simple (and you can follow along in this video): Cut your lemons into quarters lengthwise, without slicing through the base. Fill glass quart jars with a layer of salt and pack the cut lemons into the jars, pressing slightly to release their juices, and salting each layer. Leave about an inch of space at the top, add some more salt, and seal the jar. Tie a pretty ribbon around the top. If you want to get fancy, include a handwritten recipe (like Israeli couscous with preserved lemons and herbed tuna). 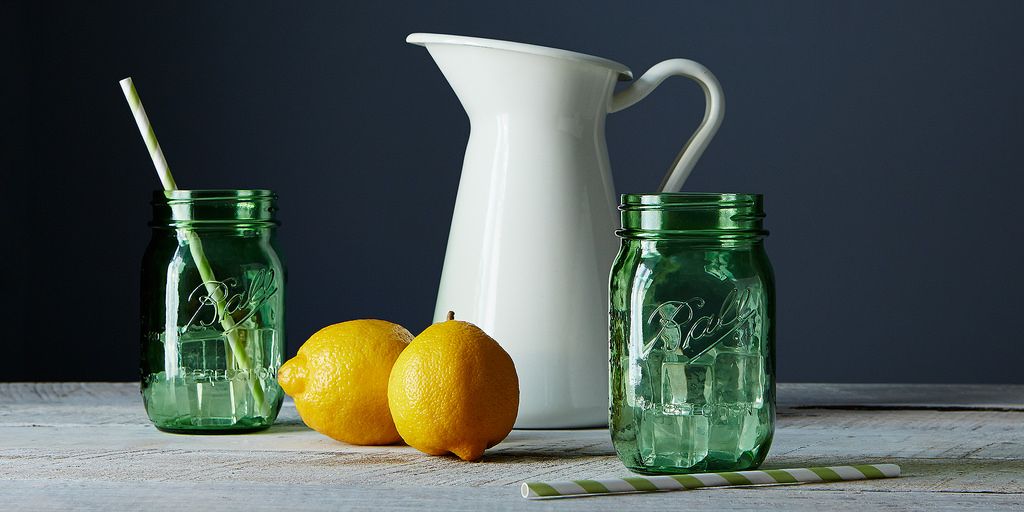 Any jar will do, but we like to use green quart-sized heritage Ball jars. They brighten up the kitchen -- and when the lemons run out, use them as a vase, a water glass, or cocktail shaker -- they're endlessly useful.

To celebrate the gifting season, we’re giving away a set of 12! To win, leave a comment below by Monday, December 1st at 5 PM telling us what edible gift you’re making this year. Chocolate bark? Fancy flavored salt? Cookies?

Kim F. November 7, 2020
I love to make hard toffee with chocolate on top-sometimes with crushed pecans sprinkled on top. (Sometimes not!) Easy to make, just has to be watched carefully. I also love to give Harvest Loaf-with pumpkin, spices, chocolate chips and pecans in it.

A July 11, 2018
Better years late than never,.. I'm going to make Vanilla Sugar for my friends and family.

Pam R. November 28, 2015
I am definitely making the preserved lemons (in fact, I made a small practice jar from your video today). They are amazingly expensive at the supermarket, and once we learned about them, we haven't been able to do without them. I'll definitely try your tuna/fennel salad, and I want to recommend this fantastic, easy chicken dish (from food52, in fact, at http://food52.com/recipes/35813-canal-house-s-chicken-thighs-with-lemon ). My husband took one taste and knew that preserved lemons needed to be stirred into farro -- lovely and subtle. I'd love to learn more ways of using them

T-Bone6 December 8, 2014
How long do the preserved lemons last once you have opened the jar? Do you store in refrigerator once opened?

Vanessa December 1, 2014
Cookies and brownies! (I'd line to think that we won't eat then all!)

Wendy November 30, 2014
Definitely, s'mores in a jar with a twist as gifts for my friends and colleagues - layer of crushed graham crackers, marshmallows, crushed oreos, salted caramel and repeat. Eat together for an unforgettable party in your mouth! :)

Caroline B. November 30, 2014
We will be giving spiced vodka, french styled baguette, bakers pate, & Xmas mince pies made from figs, ginger, dark choc, spices, and brandy. Looking forward to putting these together for our friends.

Cynthia November 30, 2014
I usually go with cookies! Might venture into bread this time. Or those assembled cookies in a jar that you dump out, add liquids, bake, and ta-dah! Fresh cookies/brownies!

Jennifer C. November 30, 2014
I was trying to decide between pickles, something baked (cookies or bread), or some type of bath salt, but this looks quite tempting!