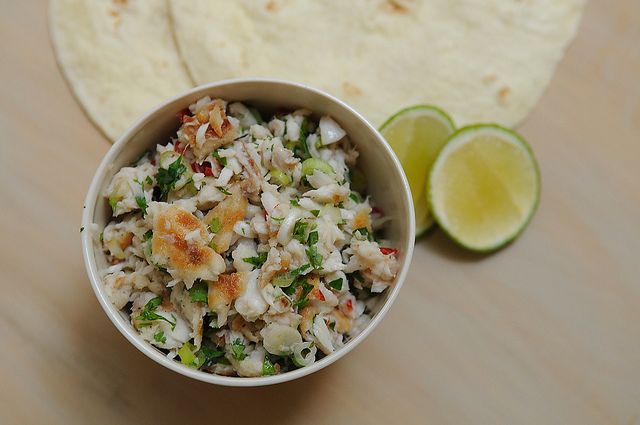 There is a dish at Fonda, a fantastic Mexican restaurant that opened up near our apartment last year, that I order every time we go there. It's called fish salpicon, and it's simple, but incredibly fresh -- just chopped, cooked fish tossed with chili, onion, cilantro and lime juice. It’s basically a cooked ceviche, served with homemade corn tortillas (I like to add a dollop of their homemade guacamole and make my own taco).

Last week, I decided to try to recreate it. I used tilapia, which I thought would flake nicely, and reminded of the beauty of Wondra by one of this week’s chicken wing finalists, I lightly coated the fish in Wondra before sautéing it, which gave it a nice crisp crust. Mine didn’t turn out exactly like Fonda’s, but I liked it anyway: it’s an easy dish to whip up as an hors d’oeuvre (serve it with chips instead of tortillas), or as a light supper for one.

Serves two for dinner, four as an hors d'oeuvre

1. Put the Wondra in a shallow dish and season generously with salt and pepper. Whisk to combine. Dredge the tilapia in the Wondra, patting gently to remove any excess.

2. Heat a large sauté pan over medium heat and add a thin film of oil. Add the fish to the pan. Cook for 2 to 3 minutes, until golden brown on one side, and then flip and cook for another 2 to 3 minutes. Remove the fish to a cutting board and let it cool for a few minutes. Flake the fish with two forks, or chop it roughly with a sharp knife.

3. In a medium bowl, combine the fish with the chili, scallions and cilantro. Squeeze one lime over the top and fold gently to combine. Taste and add more lime and salt if necessary. Serve in a pretty bowl with the tortillas and chips, and avocado if you like.

bellaroxannebc October 12, 2010
I once heard the great Eric Ripert say that Wondra was a secret ingredient at Le Bernadain for crispy fish.

mer October 10, 2010
I would love to make this tonight. What is Wondra?
Thanks

Merrill S. October 10, 2010
It's a very fine, "quick-mix" flour that's good for thickening gravies and sauces -- and, it turns out, great for dredging! http://www.gmflour.com/gmflour/flour.aspx?type=wspecialty

mer October 10, 2010
Thanks Merrill. I can picture it now-blue shake it container. Just did not imagine flour in this dish.
It looks and sounds like it will be delicious

Gale October 6, 2010
Made this tonight with my least favorite fish and it really was delicious. Served with corn tortillas and shredded (plain) cabbage AND served with the homemade Rooster sauce ( is that stuff ever good). What a great meal. Muchas gracias. And Antonia James is so right about Wondra - great product.

AntoniaJames October 6, 2010
And speaking of Wondra . . . let's not forget that it comes in a clever and handy "Pour-n-Shake" container. I've been using this stuff since I was a young girl (when it was first introduced). I can't imagine a kitchen without it. Mine has a place of honor in the prime real estate in my kitchen -- within half an arm's reach of my stove. Great recipe, too. Must try it. I'm not a big fan of tilapia, because it seems so bland, so this seems to be the perfect recipe for it. ;o)

Merrill S. October 10, 2010
Let me know if it changes your mind about tilapia!

lastnightsdinner October 6, 2010
I bet this would be great with meaty striped bass - thanks for sharing this recipe!

Gale October 5, 2010
Thank you for something to do with tilapia that looks, and I am sure, will be delicious.

dymnyno October 5, 2010
Sounds great as an appetizer! I love Mexican food and this sounds lean and healthy.