We think every merchant we work with in our shop is special -- but when we find one with a great story, we'll be featuring them here. Because we want to tell the world about our favorite makers.

Today: Until 6 years ago, Lisa Jones hadn't sat at a potters wheel since she was a child. Now (lucky for us) she can't be stopped. 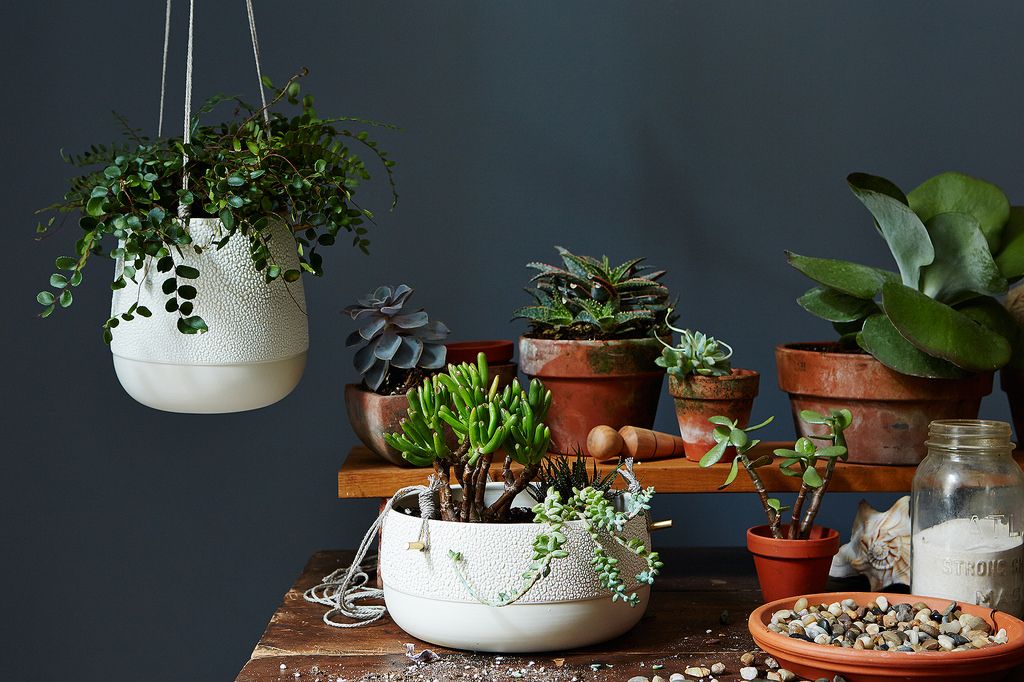 "Don't you want to know about the name? Everyone always asks about the name," Lisa Jones, the owner and designer of Pigeon Toe Ceramics, tells me. Even over the phone, it's clear that she is brazenly passioniate about her work and her whimsically-named studio, which she established 6 years ago.

At the time, Lisa had been working as a graphic designer, a position she took immediately out of art school as an "easy way to commercialize being creative." Soon, the analytical part of the position began to drain her creative energy, so she sought an alternative outlet. She brought the concept of a ceramics studio that balanced beauty with utility and accessibility to her then-boyfriend, now-husband, Ryan. Lisa remembers that as she spoke, "He asked if I realized that when I get really excited about something, I stand pigeon toed." 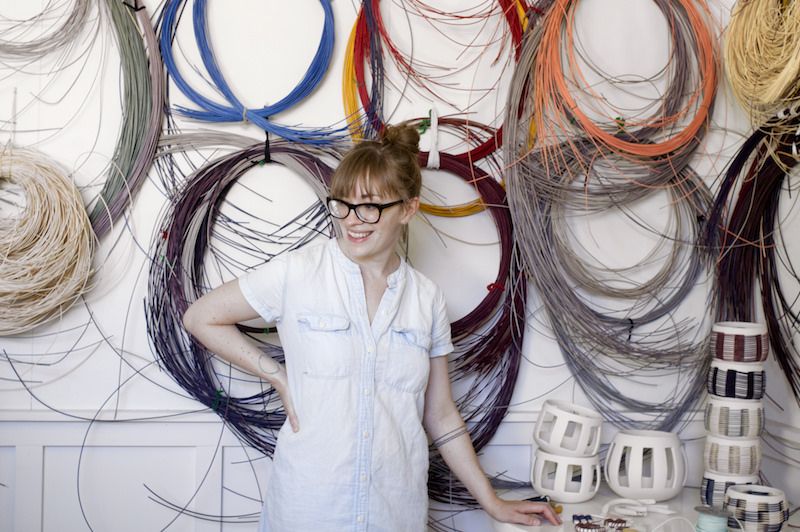 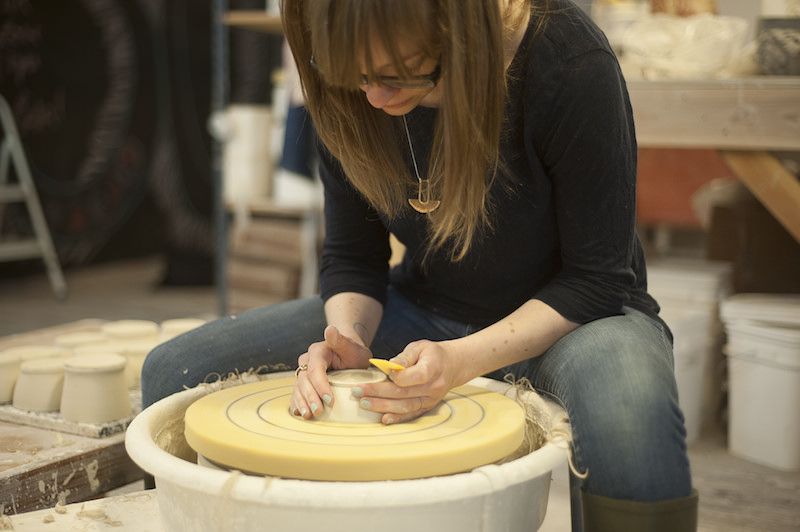 Left: Lisa, in front of a wall of reeds at her studio. Right: Lisa, throwing a small bowl at the wheel.

Lisa's excitement landed her at a potters wheel where she began throwing clay for the first time since she was a child. The medium caught her interest with its practicality -- it's easy for prototyping -- and its connection to a deep history of craft. "It allowed me to work with my hands," she told me, "and let me be both hands-on and creative, while also fulfilling my left-brain, intellectual side."

In 2008, she quit her day job to pursue Pigeon Toe -- in the middle of a recession. Lisa took this as a positive omen; starting a company in a recession, she figured, means there's nowhere to go but up. She out set to create pieces that filled the niche between low-end, mass-produced ceramics and high-end, aspirational pieces. As the recession continued, she found herself in what she describes as a "Handmade Zeitgeist:" she recognized that more people were buying handmade items, careful to spend their money in ethical ways that supported artists like herself. 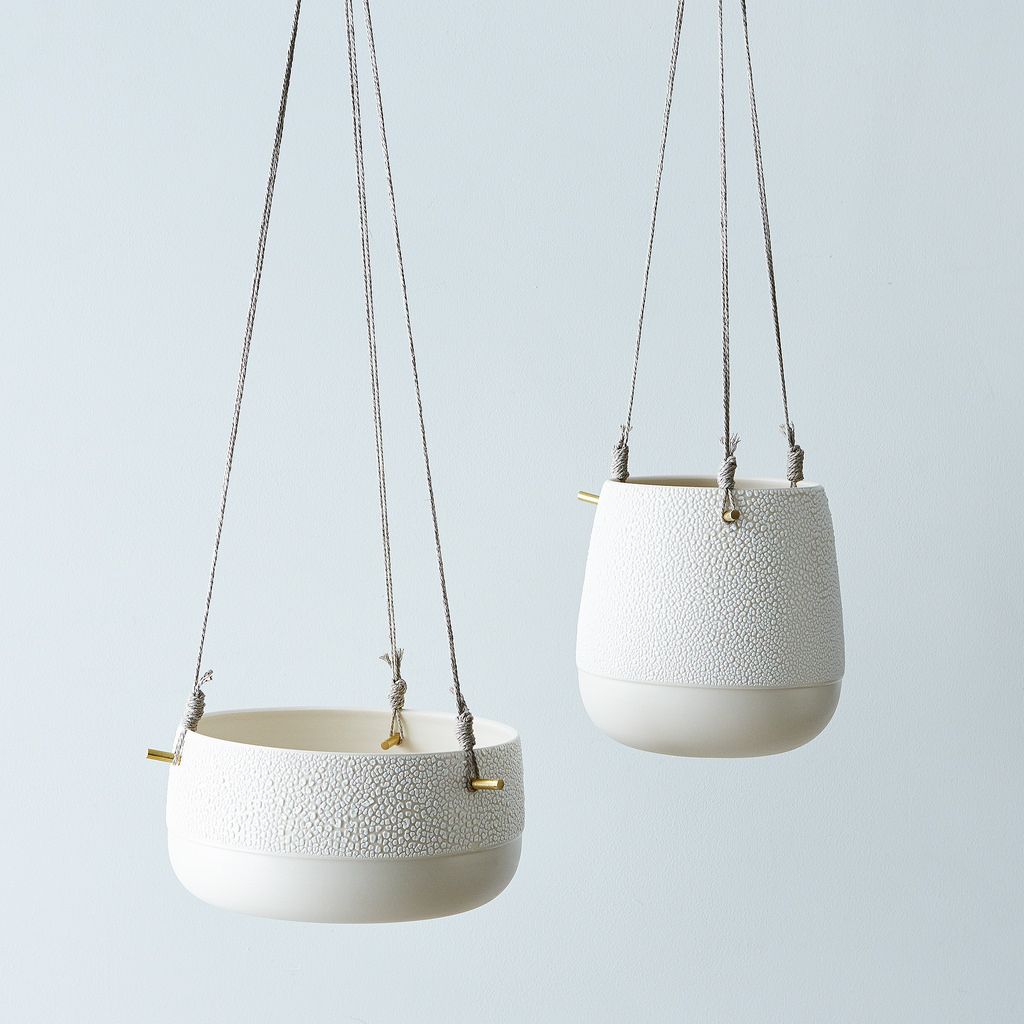 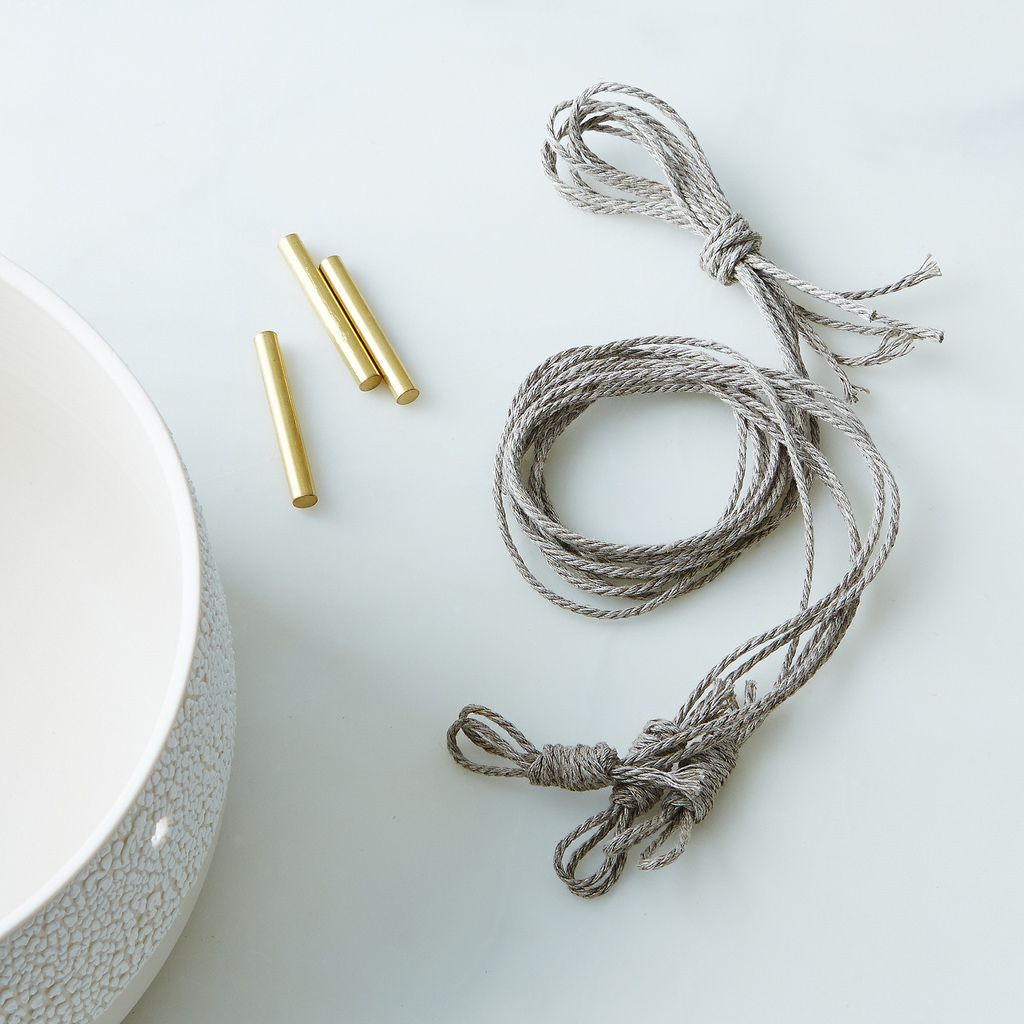 Left: The shallow and deep hanging planters. Right: Details of the brass rods and linen rope that suspend the planters.

A tremendous amount of thought and planning goes into each of Lisa's pieces -- especially as her company has evolved to produce more complicated items. "In the beginning I made very youthful and tiny, cute vessels," she explained, "Now that I own a home and have children, my buyer is changing and growing with me so that the brand has evolved into something more experimental." Today, Lisa works with unique glazes and mixed media in her products, which helps to ensure that she is always designing something she has never seen before. 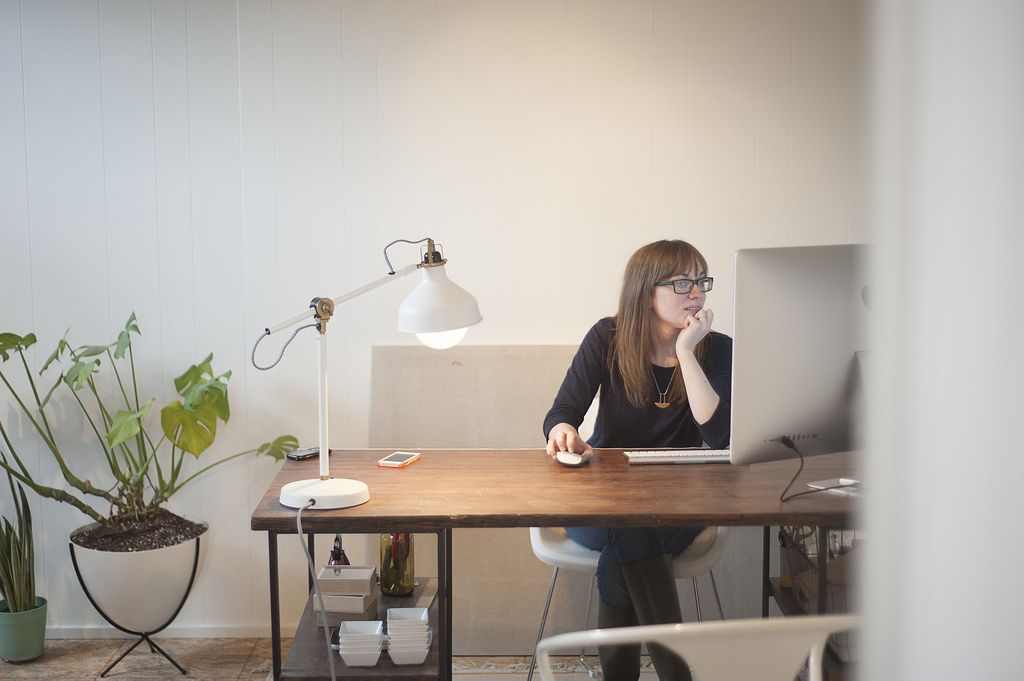 Lisa, at her desk in the Pigeon Toe studio.

Before Lisa even begins to sketch out her design, she carefully considers her options. "Each year," she said, "I look at what we already offer and think about what is missing." The concept for the exlusive planters she created for Food52 came from a void in her collection of outdoor living pieces. She began trying out different materials and ran a test with the crawl glaze, the unique webbed glaze that surrounds the top of each hanging planter. The glaze immediately grabbed her, and she started the 2-month long process of sketching and planning the capacity of the dimensions of the vessels along with technical production details.

Throughout the sketching process, she added the brass and rope details, creating a piece with three core materials. She and her team had to painstakingly learn how to cut and file the rods in-house -- Lisa called on a friend who does survival knots for help creating decorative knots out of the linen cord. 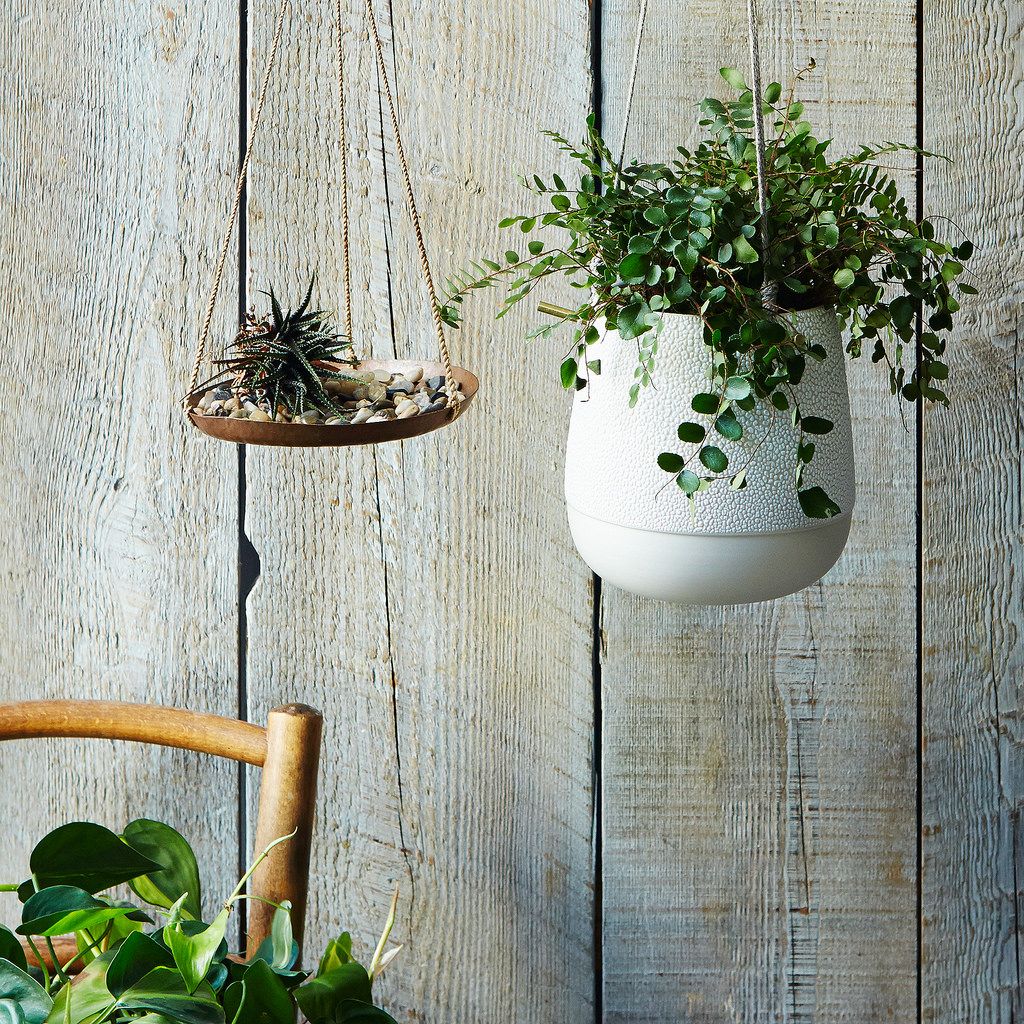 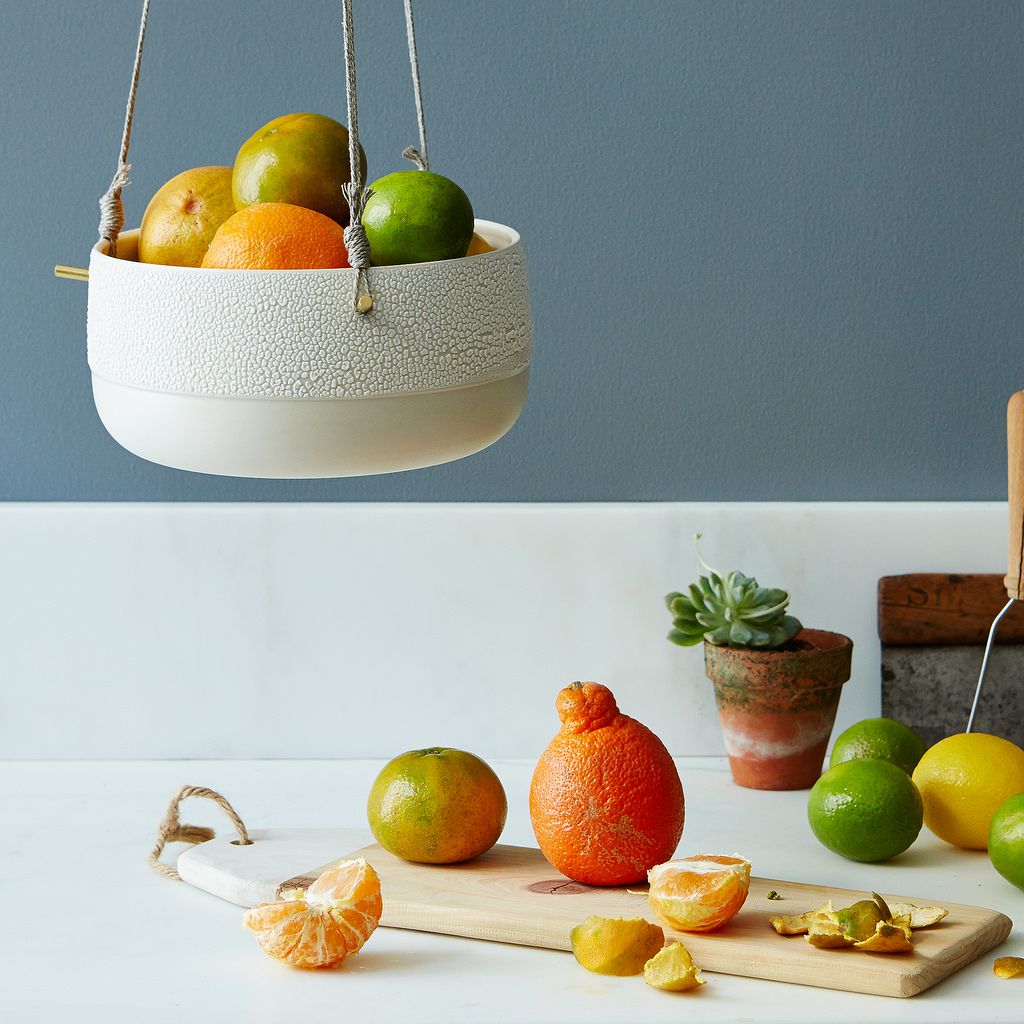 For all of the thought and care that goes into each of Lisa's pieces, it surprised me when she admitted, "I'm a little like a cobbler without shoes; I own very little of my own work." Instead, her home is filled with the work of her friends' and colleagues', with just a few of her own pieces. "It's more fun that way," she explained, "each piece feels like a minor indulgence." As for the fate of her hanging planter? Not only has it reached the high barrier of entry into Lisa's home, but she already knows where she's going to put it. "I have a landing on my second floor staircase that has a lot of natural light -- it's a plant mecca -- and this would look beautiful with a fern."

Considering the amount of thought Lisa puts into her work, there's no question that this was a well-thought out decision -- and one that we may have to emulate ourselves.

First photo of Lisa by Courtney Price; Second two photos of Lisa by Mikola Accuardi; All others by Mark Weinberg