How to Make Vegetarian Phở Without a Recipe

Today: A spin on Vietnamese phở that lets you take control of the spices and scents and textures -- no recipe or meat required. 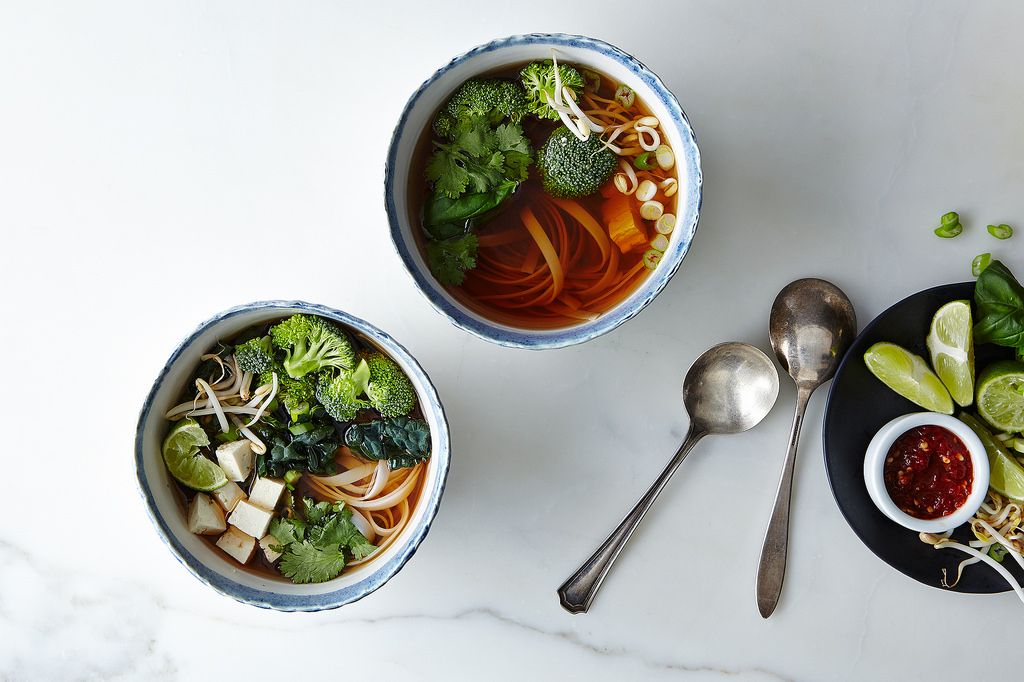 Phở is a soup you stick your face in before you eat. You can’t help but smell it: mellow onion, all those spices, zesty lime, and hits from just-relaxed herbs all steaming up together. It simultaneously nestles you underneath your blankets and ships you to the street markets of Hanoi.

Having so many flavors at work in one soup means you have a lot to tinker with. First, there’s the broth: Classically, it’s beef- or chicken-based, but you can get an equally robust (and vegan) broth by taking some traditional broth ingredients, which you likely already have in your pantry, to the oven or stove beforehand. Plus, by using your nose, you can adjust the spice components of your broth before it gets to simmering, so you know you’ll like the final flavor. And we hope you really like it, because this broth is something to have on hand for the week, to carry whatever miscellaneous vegetables need using up. 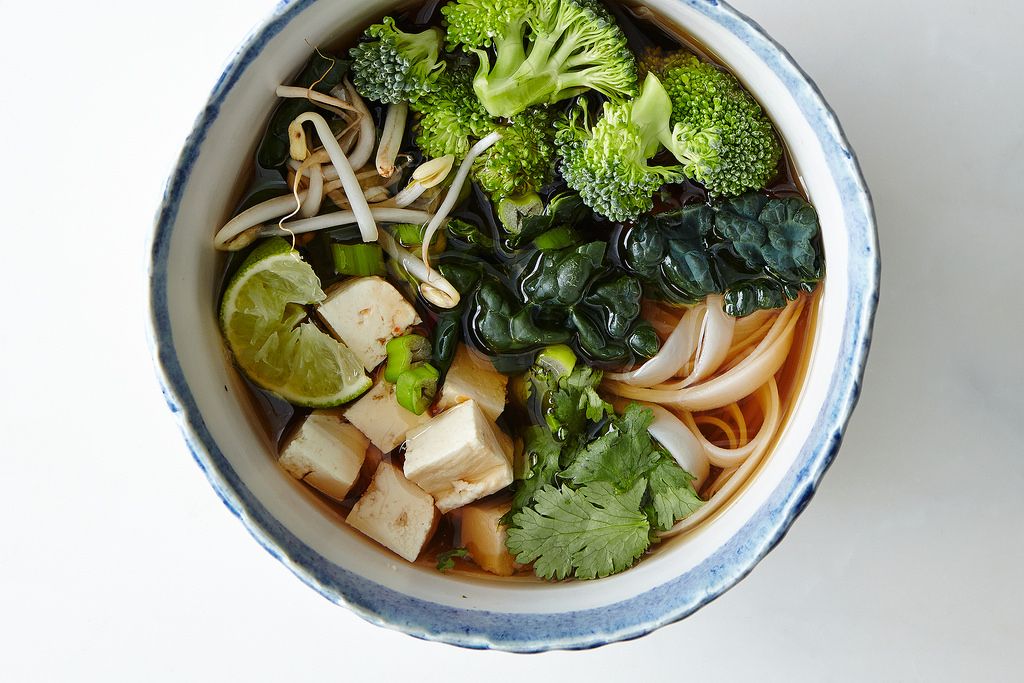 In addition to the wide array of vegetables that fit into this soup, there are noodles, proteins, and umpteen garnishes to dabble in. Stir in as many or as few as you want, or let each person choose their own (a phở bar!). A few slurps, with all the textures of the mix-ins and that anchor of a broth, and you’ll feel good, fortified. Here's how to do it:

1. Scorch. Cut an onion and 2 pieces of ginger in half; the peel can stay on. Using tongs, place the pieces of onion and ginger directly over the flame of your gas stove, one by one. Hold them there for 3 to 4 minutes, turning every so often so all the sides get black. It might look as if you’re making onion s’mores (which sound horrible) -- but there’s a good reason you’re going there: Charring the aromatics gives them a smokiness and a nice, mellow sweetness.

If this indoor campfire sounds treacherous, you could also broil the onion and ginger in the oven for 3 to 4 minutes on each side. You could also skip the charring step entirely and proceed to step two using chopped raw onion and ginger, though the broth won’t end up quite as sweet and soothing. 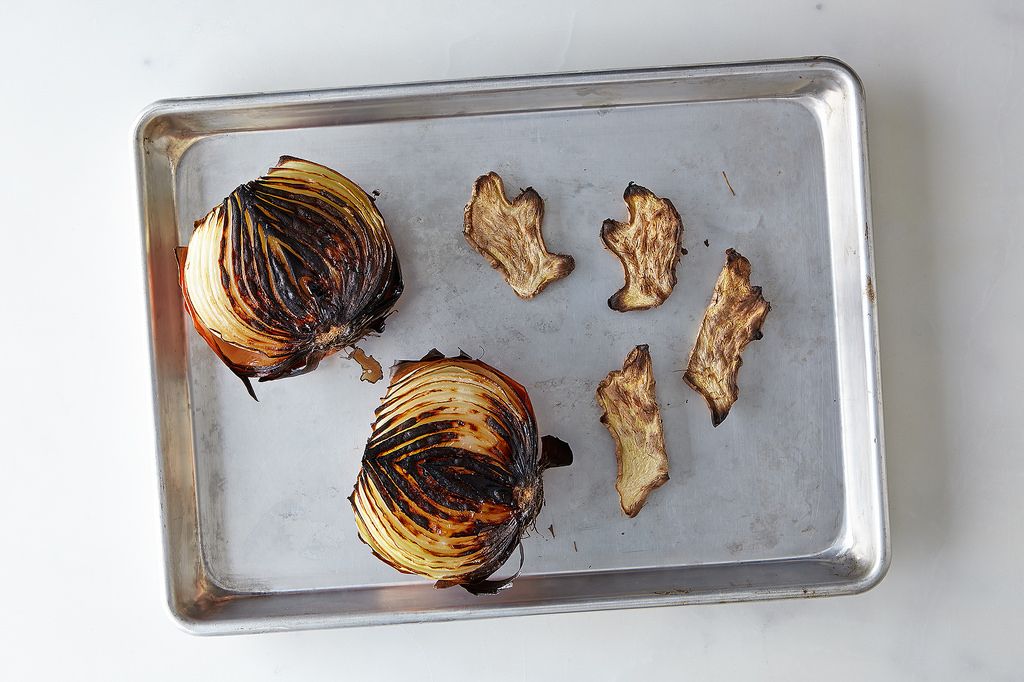 2. Make the broth. Put the onion and ginger in a soup pot with 6 or so cups of water. Next come the spices. Measure a cupped palmful (or a tablespoon) each of fennel seeds, coriander seeds, and peppercorns, and add them to a little bowl. Throw in a few cardamom pods, star anise, cloves, and cinnamon sticks. Smell the mixture: Do you like how it smells? Do you want to eat a soup that tastes like that? Into the soup pot they go. Are you not getting enough fennel, or do you want more of another spice? Add a bit more, smell to make sure it smells like what you want, then add the spices to the pot. Throw in a pinch of salt. 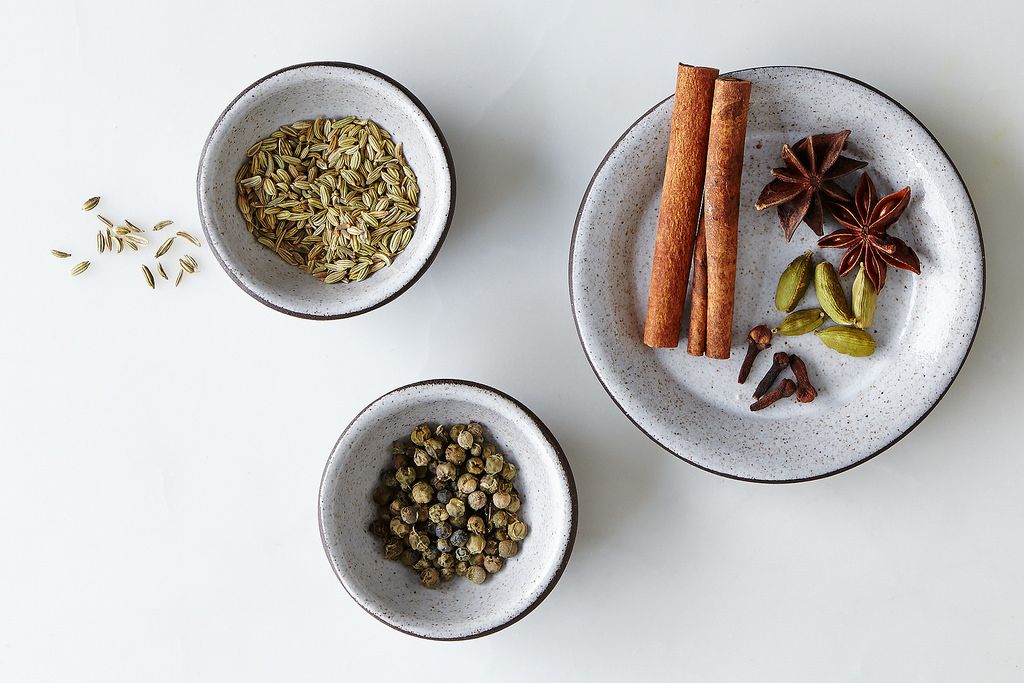 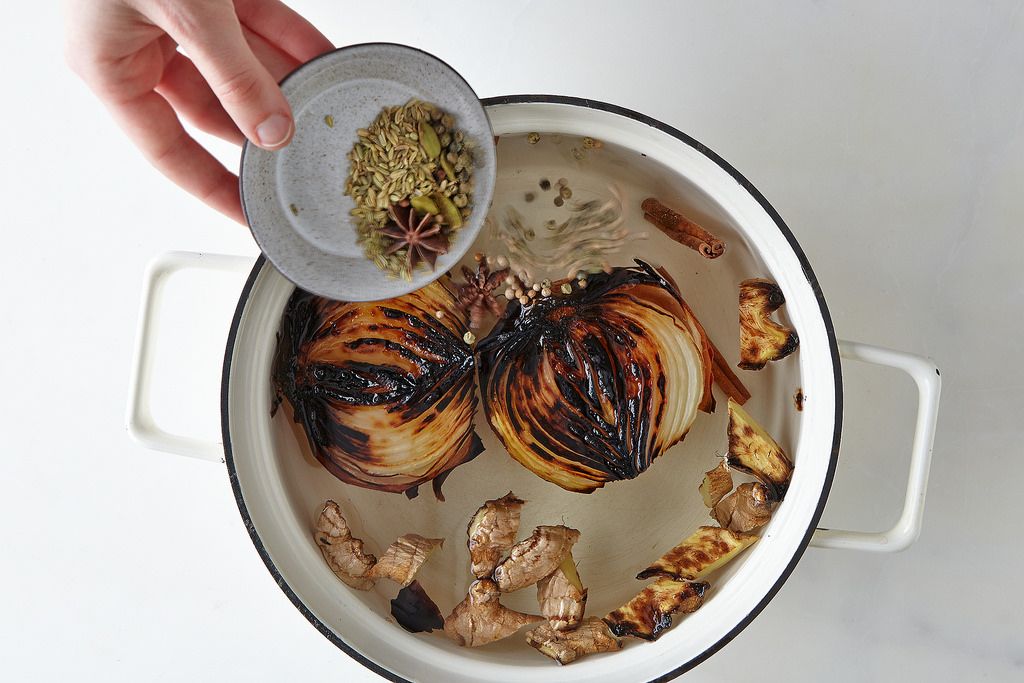 3. Simmer. Bring the mixture to a boil, and let it simmer, covered, for an hour.

4. While you wait, prep your mix-ins. They may be a combination of: 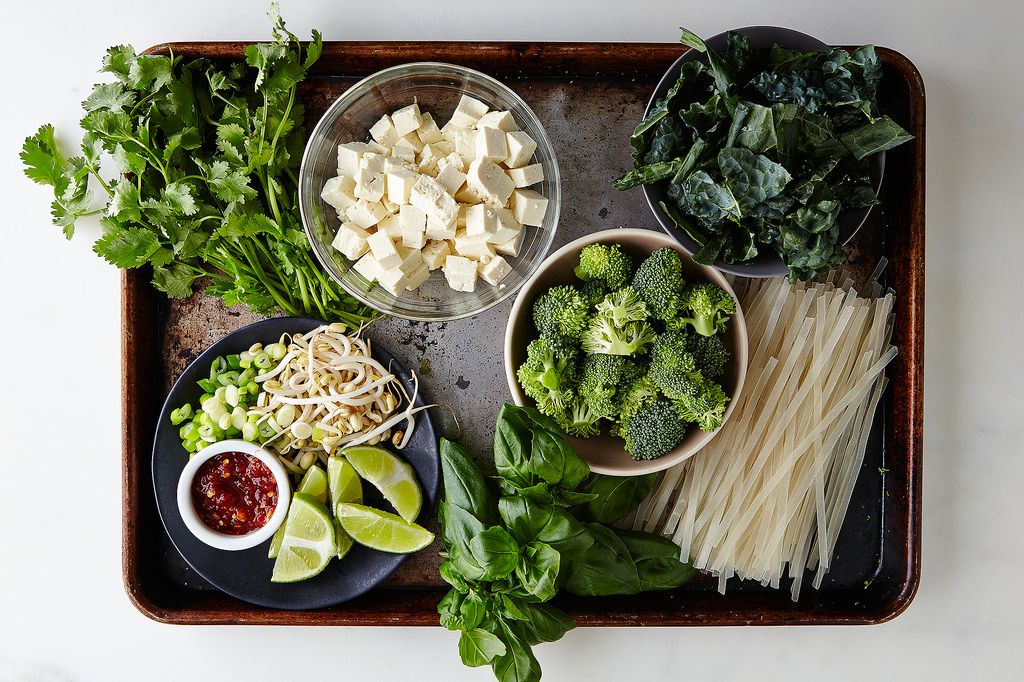 As you bide the time while your soup cooks, entertain yourself with some phonomenal puns: Pho is a phobulous, unphogettable Vietnamese soup -- pho real, it should be a phonomenon. Pho pho the win. Pho phoever. It’s pho sho what’s pho dinner. (Except really it’s pronounced “fah,” not “fo,” so you can phoget about this phonny business.) 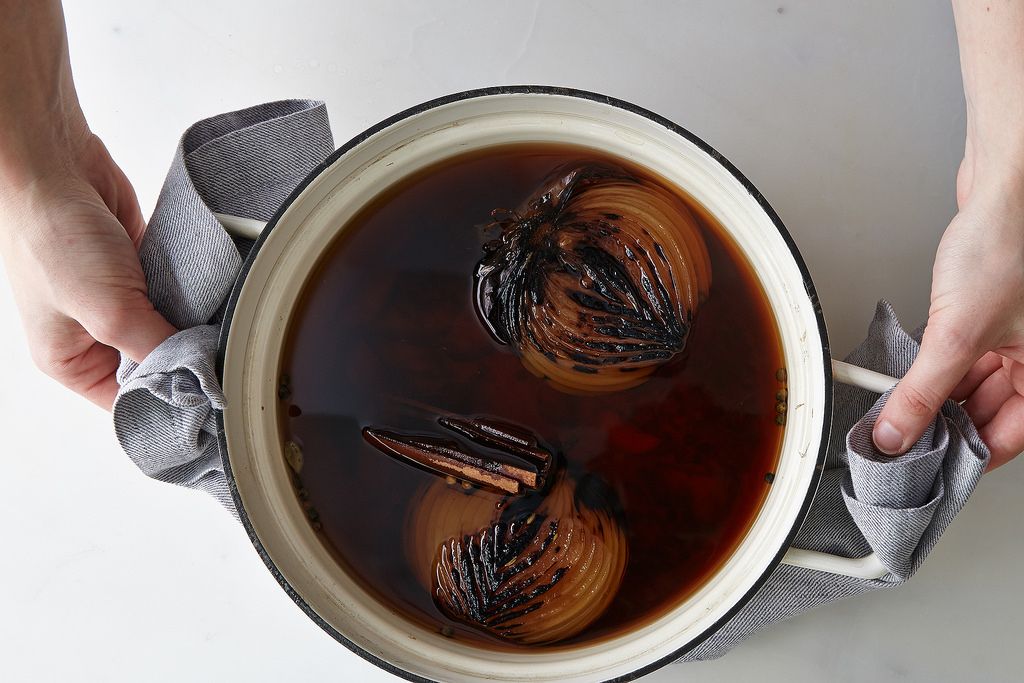 5. Get ready to slurp. Your broth will be ready when you taste it and you like it. If the flavor isn’t intense enough, let it simmer for a little longer. If the spices are overwhelming, add a bit more water. Then, strain the broth and discard the solids. Ladle into big bowls and add as many or as few of your mix-ins as you’d like. Let the raw ones (everything but the noodles) soften a bit from the heat of the broth. Take a whiff. It's good, right?

KatJ January 30, 2018
Yumm!! I added a piece of Kombu seaweed and some vegetable bouillon paste in place of salt. Also I saw a recipe for vegan pho once that called for 1/2 teaspoon if blackstrap molasses!! Sounds weird but I added it. Gave a beautiful brown color and a mild sweetness.
Anyway, I could eat this soup every day : )

This broth is adaptable, I don't like star anise that much so using my mother's recipe I use less as well as less fennel. So change it up the way you like it. I would add garlic cloves to the broth and my mom used to use Rock sugar for sweetness.. use shiitake mushrooms for a more earthy unami flavor if you're going to keep this vegetarian or vegan. My mom would always tell me to soak the noodles first and then when you're ready to make your pho Bowl in a pot of hot boiling water, dip your noodles in to soften it up for about 1 minute. Then take your noodles out and start assembling your bowl. Don't forget your hoisin sauce and sriracha

robin L. March 7, 2016
So funny--I was going to 'pay this pho-ward' to my friends, until i read farther down about the correct pronunciation! 8^) but i love this post and this and how relatively simple it sounds like one can make a lovely broth...will have to try.

creamtea June 11, 2015
I have Chinese cabbage and tempeh to use up. Will that work?
Author Comment

Ali S. June 11, 2015
Absolutely. The broth will go with just about any vegetable and protein.

cookie312 April 13, 2015
I made this tonight and it turned out great! I added some soy sauce to add some depth and umami to the broth. I wish I had seen the comments about the lemongrass as I would have added it! Will definitely be making this again!!

BR95510 March 23, 2015
Any idea how many servings this might make? I'm going to use my homemade veggie stock in place of the water for extra depth in flavor. Yes??
Author Comment

Ali S. March 23, 2015
This would safely serve two, depending on how big your bowls of pho are. And you could definitely use vegetable stock -- great idea. Let me know how it goes!

Ahayes March 16, 2015
Wondering if the broth could be made in bulk and frozen for future use? Since it's the most labor intensive part of the recipe it'd be nice to do a huge double/triple batch and thaw as needed.
Author Comment

jessica402 March 6, 2015
As the husband doesn't like most of those spices added in excess, I'd go rather lighter on them (perhaps dry toasting/roasting them first) then add mushrooms and kombu to the broth to add depth.

Honeylishuss March 6, 2015
When we were in Vietnam doing food/ cooking tour our guide pronounced pho as fur with a short r sound. I am wondering how the recipe gets a deep bottom note flavour unless you create a master stock thats cooked for hours and hours

Lori G. March 5, 2015
Thanks for the interesting recipe. I just made it for dinner. I also found the cloves, cinnamon and anise overwhelming. I would put less of them, if any, next time. I did add lemongrass. Adding lime did balance the flavors.
I also had a hard time scorching the onion. The onion skin was catching on fire. I removed it and that went more smoothly. I was probably not doing it correctly.
I think the idea here is to know what spices you like and add them accordingly. For me, next time I would add them all but eliminate the cinnamon, cloves and anise.

Genza March 5, 2015
I made it. I think it needs 0 cloves and cinnamon, but add lemongrass. I did not love it, it was too clovey/cinnamony. But this is an easy broth to throw together, thankfully.
Author Comment

Ali S. March 5, 2015
Yes, the spices are important to balance. Their pungency is dependent on their freshness. Hopefully you'll try it again, adapting it to your ingredients and preferences!

liz March 4, 2015
Or if don't have a flame burner can roast big chunks of onion before addint to brothmaking step. Gets that same amazing dark broth color as in your photo.
I've had success also roasting asian eggplant cubes along with onion to make veg broth....

Rrrandy March 4, 2015
Good article - I've been a phan of pho for over a decade and here in Seattle we have great pho restaurants on just about every street ("What the Pho" has a great veggie broth). One small but important point is that the correct basil for accoutrement is thai basil or red basil. Regular or "italian" basil would be a bit awkward IMHO.

Sheri C. March 4, 2015
Usually not a fan of vegetarian dishes, but the photos make this look so delicious that I'm going to give it a try!