How to Make Knife-Cut Noodles

Today: Betty of le jus d'orange demonstrates how to make fresh, chewy knife-cut noodles like a pro, complete with a stir-fry recipe to use them in. 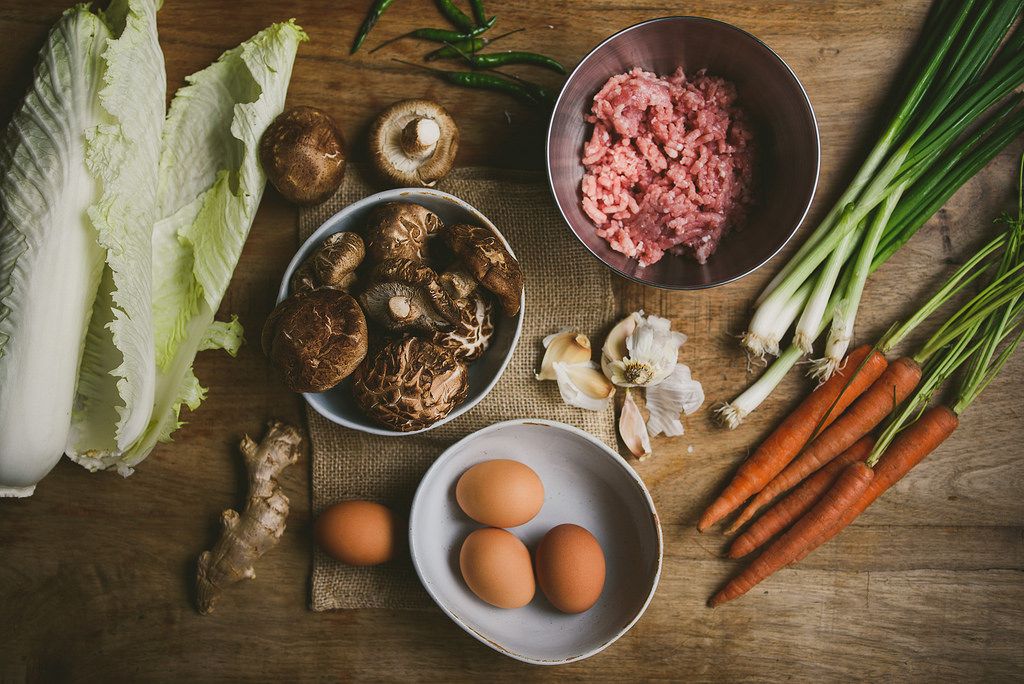 There is a Chinese saying that can be loosely translated to, "There is no satisfaction without noodles," which pretty much describes my take on life. The first time I had knife-cut noodles was in China: I was young, so my memory is spotty at best, but the texture and feel of these noodles remains stubbornly in my mind.

More: On a noodle kick? Here are 9 of our community's favorites.

When I came back to the States, I always kept an eye out for knife-cut noodles. Luckily, I found a restaurant at home that serves them stir-fried, and it was my go-to place for years. When I moved away from home, instead of renewing my search for these noodles, I just decided to make them myself. 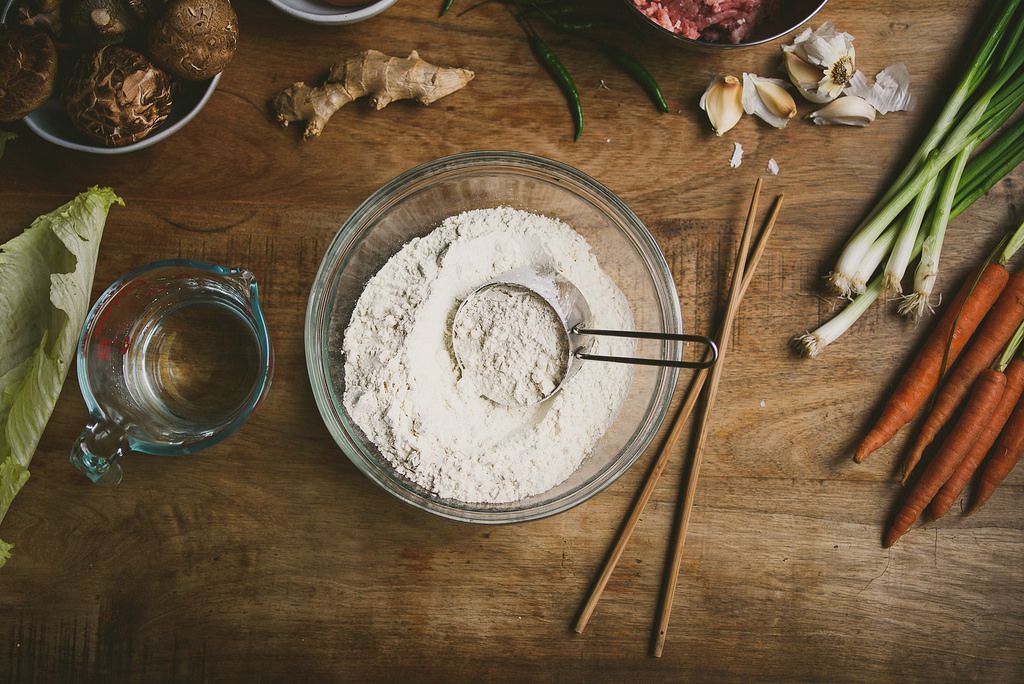 Knife-cut noodles (Dao Xiao Mian) are legendary in China, a specialty of the Shanxi province. They are known interchangeably as knife-shaved, knife-cut, pared, or even peeled noodles. The method of making them is an art form that takes years of practice, but I've discovered an easier way to make them at home.

The true, authentic technique is to hold a large block of dough with one hand at about a 30º angle downwards. With the other hand clutching a special sharp knife specifically made for this purpose, the noodles are shaved directly into a large pot of boiling water. For those practiced in the technique, it’s fast and has been described as an endless loop. If you search for “knife cut noodles” on YouTube, there are videos showing super chefs shaving off pieces of noodle so fast that you can hardly see the individual ones -- it’s all a big blur. 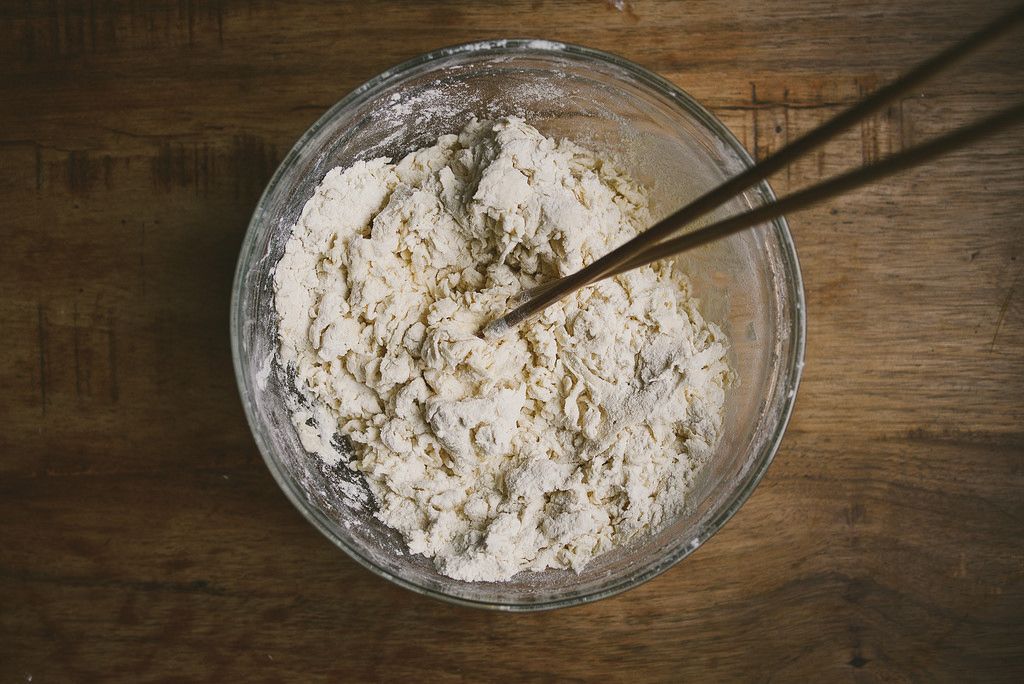 If you're anything like me and don't have years to spend on perfecting a highly specific knife technique, I’ve provided an alternative method for cutting the noodles: It won’t produce the signature thicker-in-middle and thinner-on-sides shape of the noodles, but it will give you thick, chewy knife-cut noodles with all of their rustic, imperfect charm. 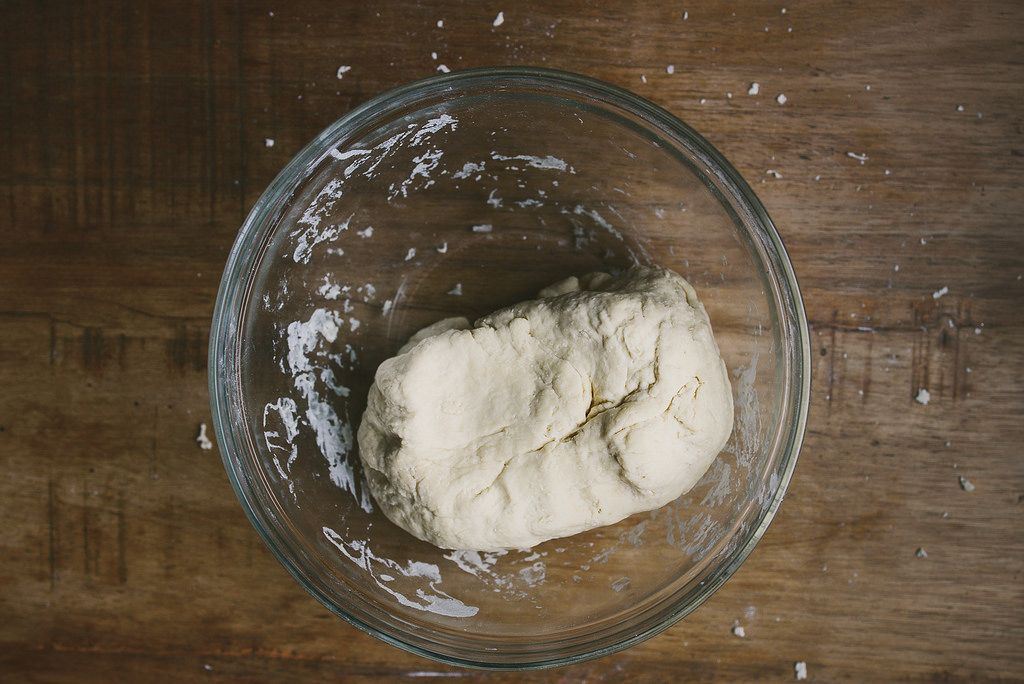 As difficult as cutting the noodles is, the dough is the tricky part -- it needs a high-protein flour (I used bread flour), a tiny bit of water, and time to rest after kneading. I remember one of my favorite quotes from Jodi Picoult’s book, The Storyteller: “It’s silly to anthropomorphize bread, but I love the fact that it needs to sit quietly, to retreat from touch and noise and drama, in order to evolve.” The same can be applied to noodle dough. It’s imperative for the dough -- and your arms -- to rest after each knead: The dough will not be soft and elastic; it’ll be smooth and hard, and honestly a pain to knead. Think of it as an arm workout. 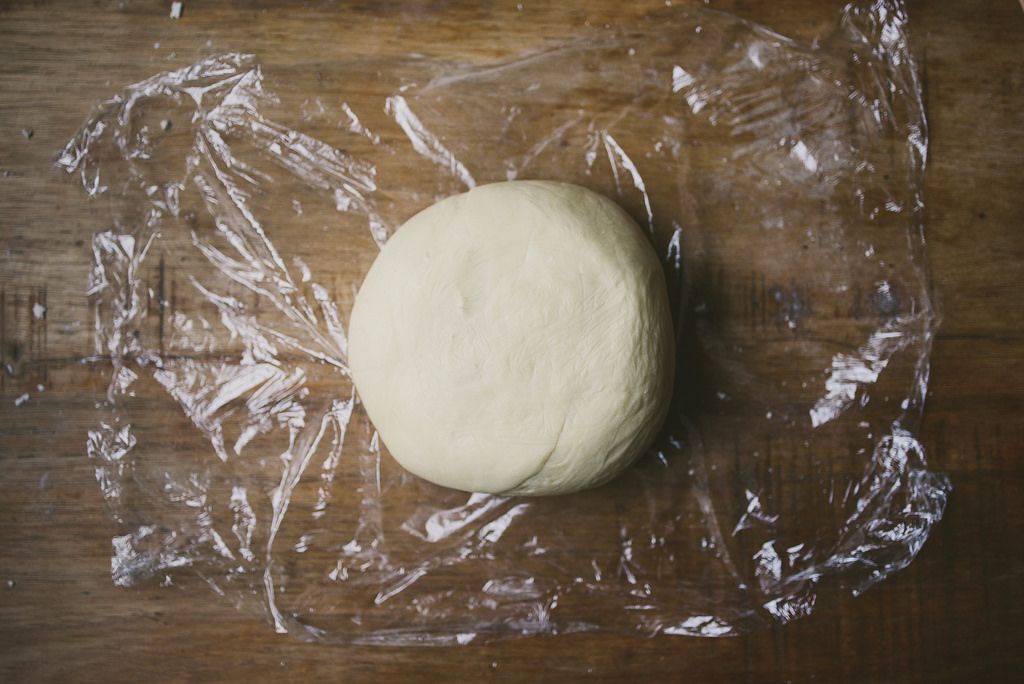 I don’t know if I’ll ever master the true technique of shaving noodles, but the texture and taste of these noodles are good enough to satisfy my cravings for true Dao Xiao Mian. I’ve already made these three times, and I don’t think that’s going to be the end of it. 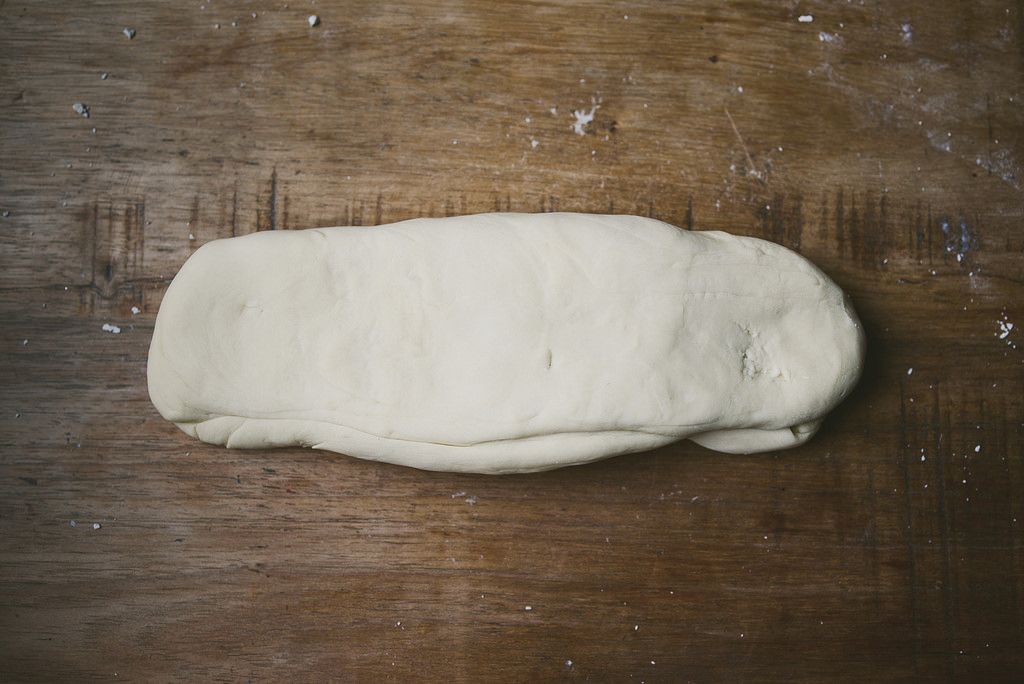 In a large bowl, add the bread flour and make a well in the center. Add 1 cup of water in roughly 1/8 cup increments, mixing it in with chopsticks, until all the water has been added. It will look rough.

Once all of the water has been added, use your hands to mix it in, kneading it to form a rough dough inside the bowl. The dough should be dry, but if it's falling apart, add more water 1 tablespoon at a time -- but not more than 2 tablespoons. Knead until there are no residual clumps of dough in the bowl or on your hands. Once it resembles a rough dough, turn it onto a dry surface and knead it for 5 to 6 minutes. Its surface should start to become smooth. Wrap it in plastic wrap and let it rest for 15 minutes to allow the flour to hydrate. 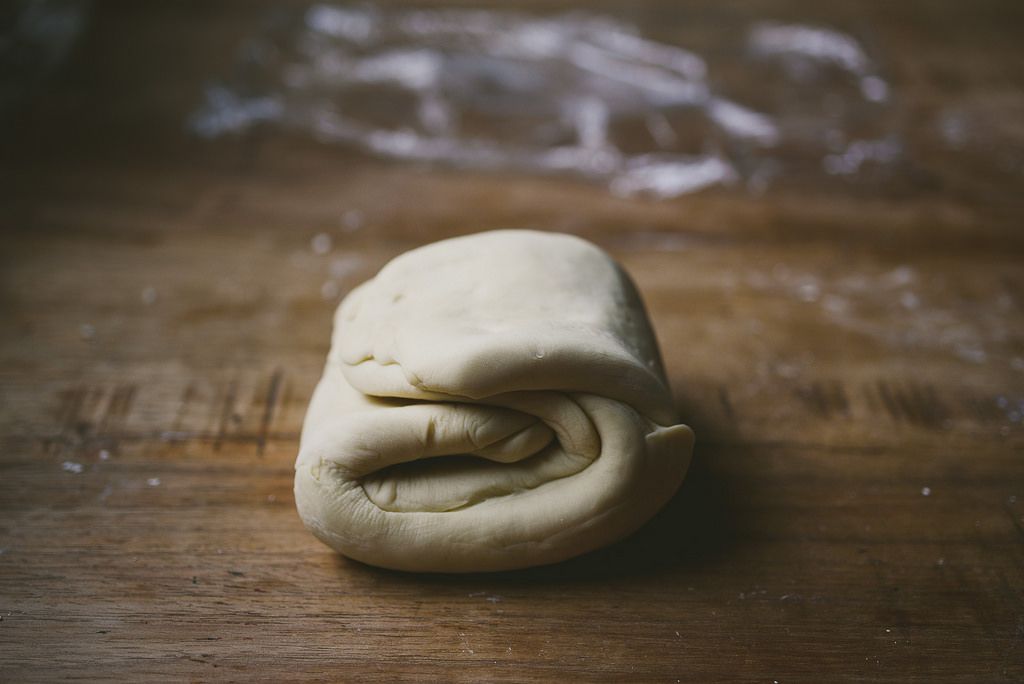 Remove the dough from the plastic wrap and knead it on a dry surface for another 5 to 6 minutes. Then, re-wrap it in plastic and allow it to rest for another 15 minutes. After each of these two rests, the dough should become visibly smoother and easier to work with.

Remove the dough from the plastic wrap and knead it for another 5 to 6 minutes. Form it into long oval shape, and fold it into thirds, as shown in the photo above, with the two ends overlapping, so that there are three layers. Knead it into a long oval shape again, and repeat this process another two times. Finally, form it into a long oval shape once more and wrap it in plastic one last time. Allow it to rest in the refrigerator for 30 minutes. At this point, the dough's surface should be very smooth, or guan hua ti shi in Chinese. 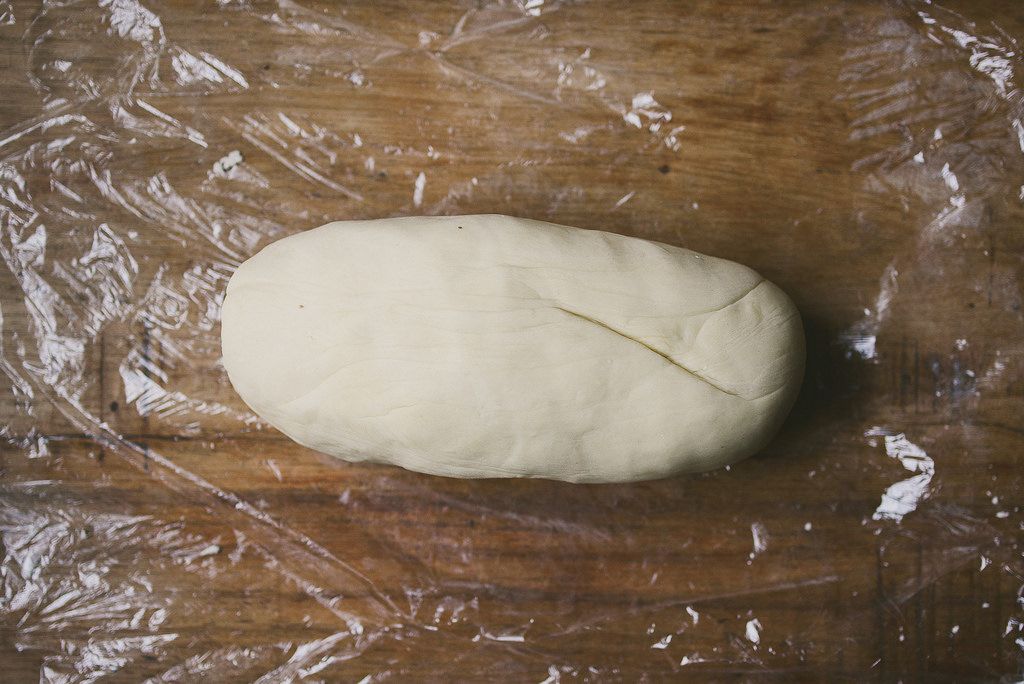 Once the dough has rested, begin to cut it into noodles using one of two methods:

For the traditional method, use a very sharp knife and have a pot of salted boiling water ready. With your left hand, hold the oval dough pointed downward at a 30º angle, with the downward-facing edge resting on a cutting board. This will help you make smooth, even cuts. With your right hand, shave the knife down the dough to create thin noodles. There's a Chinese saying to help you visualize this technique, "Knife doesn't leave the dough, and dough doesn't leave the knife." It should be a continuous loop.

This technique is tricky, which is why I opted to do the second, less traditional but easier technique: Place the oval dough flat on the cutting board. Use a sharp knife to slice off noodle pieces, as if it were a vegetable. This makes it easier to control the thickness and length. If the cut noodles begin sticking together, flour them with bread flour. After you're finished cutting all of the noodles, add them into salted boiling water and stir to prevent clumping. 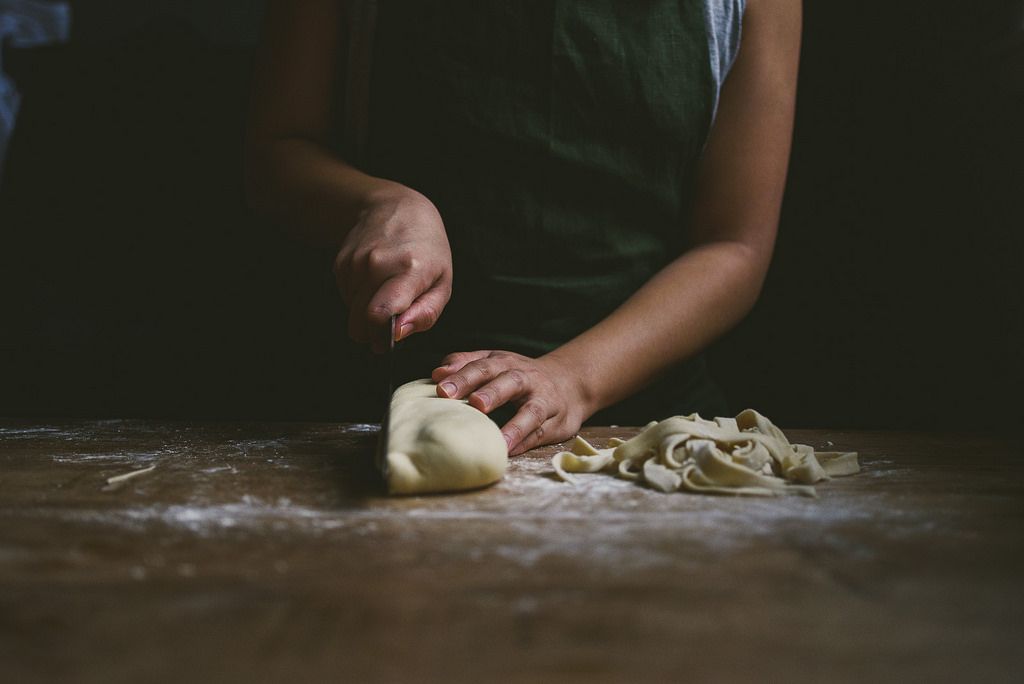 If you’re using the noodles for a stir-fry, remove the noodles as soon as the water returns to a boil. Rinse them with cold water and set aside. If you are using these noodles for a soup, cook them completely through, about 8 minutes. Either way, you should use the noodles immediately to ensure freshness, but if you do need to store them, dust the raw noodles with flour to prevent sticking, and store them in an airtight zipper bag in the refrigerator -- they will last for a few days. 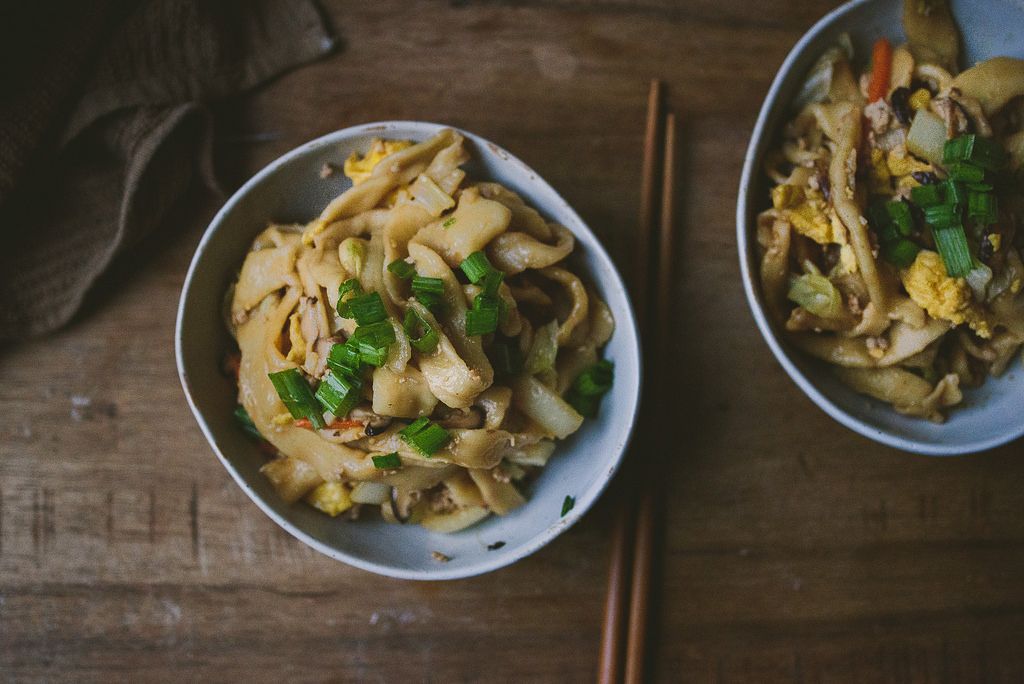 My favorite way to use these noodles is in a simple pork stir-fry with carrots, shiitake mushrooms, and fragrant spices like ginger and garlic. I'll often fry it up on a busy weekday night -- and the beauty of it is that it's easily customizable. I've included my favorite variation of it in the recipe below, along with the knife-cut noodles.

Barbara March 25, 2015
My mom taught me to roll out the dough to about 1/4" thickness, then roll it like a jelly roll, then slice it for very even, perfectly shaped noodles. Now I'm on my second Atlas pasta machine for that chore (I wore out the first). Noodles cooked with either chicken or beef are the best food gift for anyone needing comfort food!
Author Comment

Betty March 25, 2015
yes!! fresh noodles = my personal favorite comfort food. I've made those types of noodles before - for me it was homemade udon noodles, where the dough was pliable enough to roll out, then fold and slice. The nature of this particular noodle, though, is that it's hard, which is why you need to "shave" or "cut" it. I don't even think I'd be able to roll it out!