How to Eat Salt & Vinegar Chips for Breakfast

Today: Everything you love about salt and vinegar potato chips, in breakfast form. 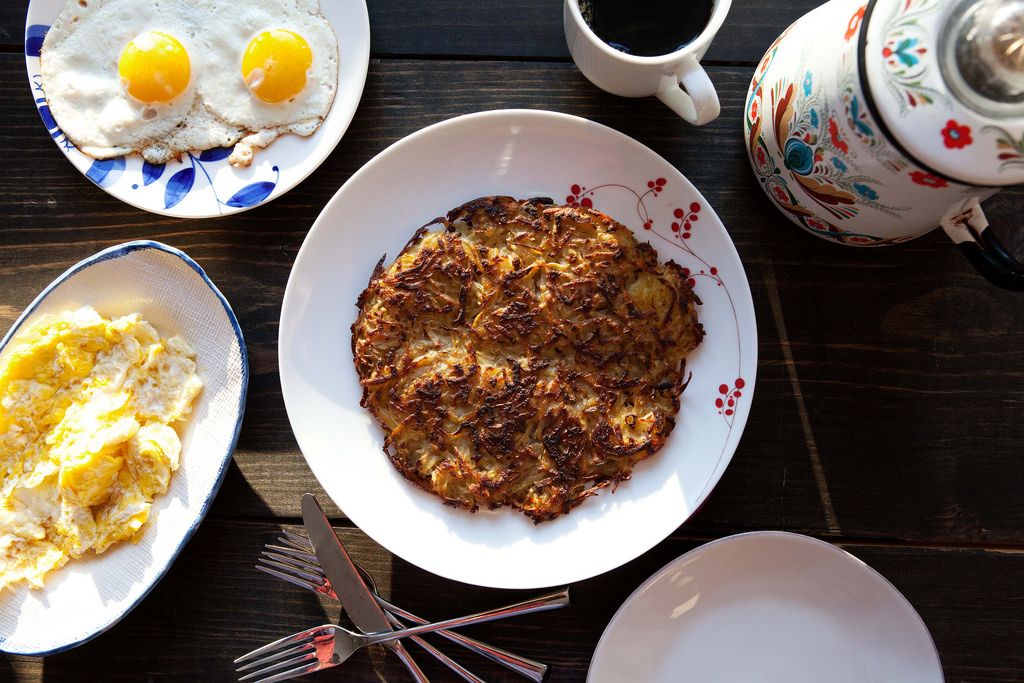 Hash browns have never been a food that has interested me much. I have plenty of friends that go wobbly in the knees at the thought of potatoes in almost any form, but I’ve always considered potatoes to be mostly a vehicle for other things -- in my case, mostly gravy.

In my mind, hash browns were -- up until recently -- weird, floppy, messy pancakes made of sort-of-fried, shredded potatoes. Why on earth would you waste stomach space on that unless you were truly desperate for something, anything, to put ketchup on at breakfast? I didn’t think more highly of the cubed variety of hash browns either. Those aren’t hash browns, they’re skillet potatoes. So there.

But then, over the course of just a couple weeks this winter, my view of hash browns was revolutionized. It started when I was on a work trip with husband and toddler in tow and we stopped at a little café in search of an afternoon snack. We fixated on an apple hand pie, but thought we should have something that fit a little more in the “real food” category too.

We discovered something on the menu called loaded hash browns and ordered it. What arrived was hash browns in a format totally new to me. It was a thick -- an inch thick at least -- rectangular pillow of shredded and fried potatoes that had some of the best characteristics of a really good coconut macaroon: deep brown and crispy on the exterior, with an interior that was a surprising balance of airy and dense and creamy and chewy. I had discovered the raison d’être of hash browns. (It was also covered with things like crème fraîche, pancetta, garlicky greens, and mushrooms.) 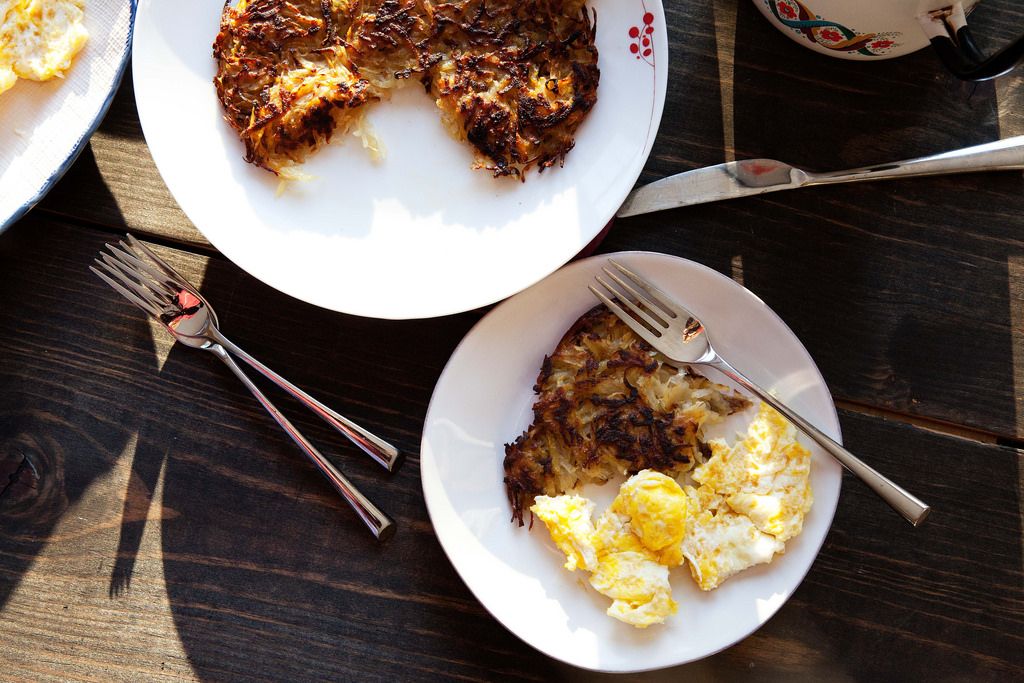 Then I ran into similar hash browns again, and then again, first at a diner and then another café. Is there a hash brown revolution going on? Or was I just ignoring hash browns before? I don’t know, but I decided to give hash browns a try at home. Remember, I am supremely new to the hash brown game, but I’ve learned the critical things for making your hash browns worthwhile:

When it was suggested to me that I make a salt and vinegar something for breakfast, I immediately thought of hash browns. This way you get hash browns combined with the bracing tang of vinegar and the brine of salt. Canadians, Brits, and everyone who eats salt and vinegar chips are really onto something -- I know that already. Add that philosophy to properly made hash browns and things will get really good. 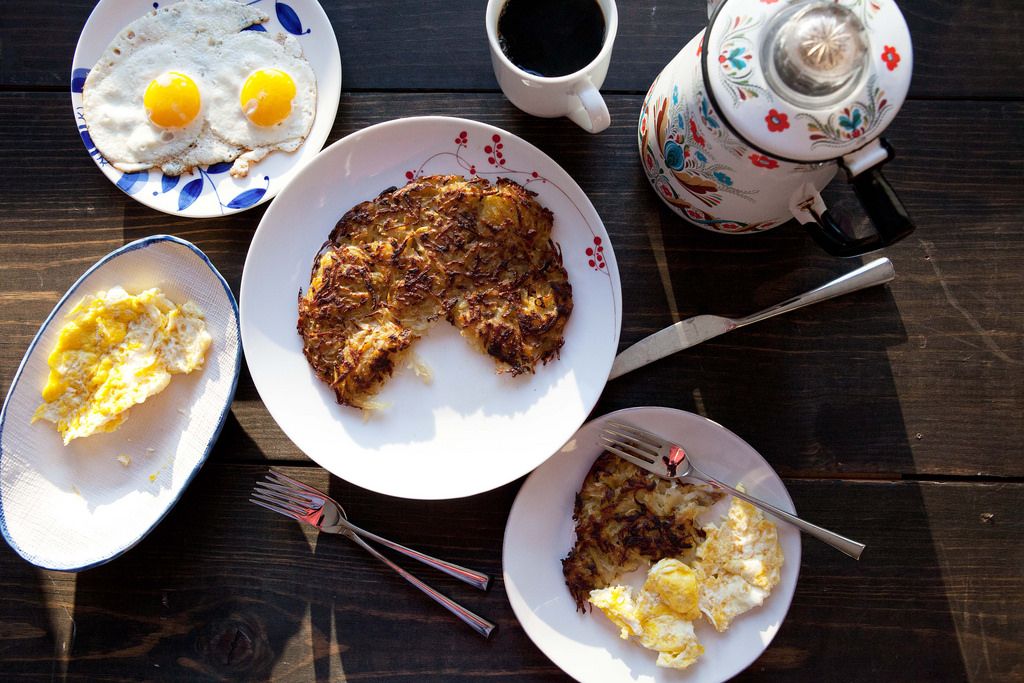 1 pound starchy potatoes, like Russets (though I used yellow potatoes this most recent time, and it worked okay)
2 teaspoons malt vinegar (or sherry vinegar is also good), plus more to taste
Generous 1/4 teaspoon fine sea salt, plus more to sprinkle on at the end
1 1/2 tablespoons salted butter

Malavika March 12, 2015
This was delicious-- I'm not a huge potato fan, but the vinegar really cuts the starchiness in a good way! I'm always impressed by your innovative yet attainable breakfast ideas!

amber March 6, 2015
I had a Filipino dish several years back where is was a sweet potato hash brown with shrimp. Fried nice and crispy but not burned. Then we would drizzle a diluted vinegar that had garlic, green onions and soy mixed into it. Sooooo good!! Never have had it again or what it is called.

aargersi March 6, 2015
1) Yum. Salt and vinegar potatoes? Yes please! These are happening this weekend.
2) was the first revelation right here in River City? If yes, where please?
Author Comment

addapinch March 5, 2015
This not only looks like an amazing breakfast, but a phenomenal supper too! Love this!

AntoniaJames March 5, 2015
Seriously, yes. Looks like the best-ever breakfast for supper, too, doesn't it?! "Must try" almost sounds like an understatement here. ;o)

Lindsay-Jean H. March 5, 2015
Salt and vinegar potatoes for breakfast? I'm so in.