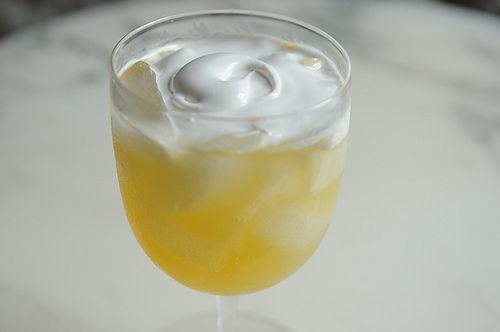 Each week, over the next few weeks, I'll feature recipes from different eras that appear in The Essential New York Times Cookbook.

There was a time -- when turtle soup was a luxury dish and whiskey was an acceptable morning pick-me-up -- when garnishing an icy-cold drink with dollop of meringue seemed perfectly normal. And why not? The meringue floats on the surface like a regal, mysterious iceberg. As you mix it in, the sugar and whites add a touch of cream to what's otherwise a traditional sweet, boozy punch.

Although this one does not, many Roman punch recipes instruct you to freeze the mixture before serving, presumably so it gets nice and slushy before receiving its meringue cap.

Roman punch was served as an intermezzo at society parties and at the White House during Rutherford B. Hayes's presidency. Hayes and his wife, who was known as "Lemonade Lucy," were temperance advocates, and to get around their strictures -- the rumor was -- someone in the kitchen devised the spiked sorbet, which was served to guests. By 1922, the drink was declared passé by Emily Post.

This recipe appeared in The New York Times in 1879.

1. Stir together the lemonade, orange juice, Champagne, and rum in a punch bowl. Chill.

2. When ready to serve, make the meringue: whip the egg whites and lemon juice in a medium bowl until they hold soft peaks, then gradually beat in the confectioners' sugar. Pile into a serving bowl.

3. Fill punch cups with ice, ladle over the punch, and top each with a dollop of meringue. Serve with cocktail stirrers. 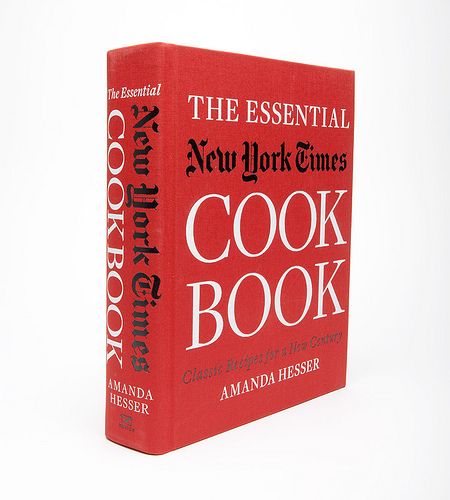 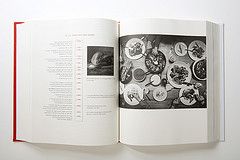 Amanda H. December 24, 2010
Just made this with limeade instead of lemonade (shopping mishap), and I'm happy to report it was really great! Also I made the meringue with regular sugar (1 egg white to 3/4 cup granulated sugar).

BirdMonk October 17, 2010
Looking forward to the delivery of my copy this coming Wednesday...

Sagegreen October 17, 2010
What a wonderful cocktail....And for the morning! Can't wait to see the book!

betteirene October 17, 2010
Which one of us will be the first to write an Amazon customer review? I could write one right now based on this recipe. Are there enough food52ers to send this right to the top of the NYT bestseller list?

monkeymom October 16, 2010
My copy of the book is shipping from Amazon right now!

A couple more comments: 1) The meringue is exactly my recipe for the royal icing with which I decorate cookies and glue together gingerbread houses--I wonder if royal icing was a happy unanticipated result of this punch? Like, maybe some of the meringue dried on President Hayes' mustache. . . 2) Nothing, nothing is ever declared passe in my kitchen--if it's good, it's good, whether I got the recipe in the 50s (Mock Whipped Cream) or yesterday (I plan on making thirschfeld's jellies until I can no longer hold a wooden spoon in my arthritic hands). I can't wait to see what memories Amanda is able to pull from the recesses of my brain.

micki B. October 15, 2010
Just love this majestic fluffy as a cloud coctail....thanks for including...and love the idea of era's!

AntoniaJames October 15, 2010
When I pre-ordered several weeks ago, the confirmation I received from Amazon said that the delivery (not shipping date) estimate is November 1, 2010 - November 4, 2010. Which means they probably are shipping now, or will be very soon. ;o)

drbabs October 15, 2010
My mother used to make a punch similar to this that she served at luncheons (she was big into mah jong) and bridal showers. I think she used ginger ale instead of champagne and rum, though!!

AntoniaJames October 15, 2010
I've had the same thing (the ginger ale version) . . . in the South!! Very old fashioned. Always thought it was so fifties-ish. Haven't thought about it in years. I can see that Amanda's new book -- I ordered it and am counting the days until it arrives -- is going to be such great fun!! ;o)

Amanda H. October 15, 2010
Thanks -- haven't had the ginger ale version but I do own a mah jong tile bracelet!

Midge October 15, 2010
Agreed, thirschfeld. Pisco sours made a believer out of me (in egg whites in drinks, that is). I too, cannot wait to get my hands on your book, Amanda.

theicp October 15, 2010
Isn't it funny how food becomes trendy and then all of a sudden - not cool? Thanks for this recipe - I cannot wait to get this book!!!

thirschfeld October 15, 2010
Man, I am so far behind, when did it become unacceptable to drink whisky in the morning. LOL. I have always liked the egg whites in drinks it just makes them so much better in so many ways. I am so looking forward to getting this book it just looks so interesting.

thirschfeld October 15, 2010
PS just by looking at the double truck you have pictured in the open book above I am guessing it is a killer layout too.