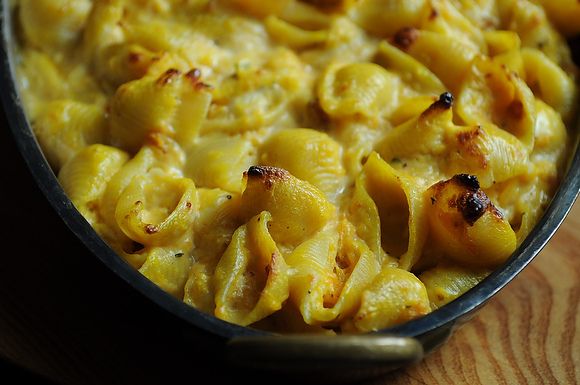 A few weeks ago, my husband and I spent a night in Providence, Rhode Island. Since he'd never been before, I wanted to take him to Al Forno, notorious for their rich, creamy baked pastas and their epic wait times. After an hour and a half (some of which we spent wandering around the neighborhood), we were seated, both a little weak with hunger and anticipation. Luckily, dinner did not disappoint.

Jonathan had a steak, but I couldn't resist ordering a baked pasta, especially since they were featuring a seasonal version of their original 5-cheese wonder that also incorporated pumpkin and pancetta. Rich, lightly sweet but also tangy from the blend of different cheeses, the pasta was tinted a rich orange throughout -- although there were little chunks of pumpkin among the baked shells, I guessed that there had been some pumpkin pureed into the cream sauce as well.

When I got home, I consulted the original recipe for the 5-cheese version, from Cucina Simpatica, and did my best to recreate what I'd had at the restaurant, adding roast pumpkin, pancetta and a little thyme. The most important part of the technique? You boil the pasta for barely 5 minutes, allowing the final blast in a flaming hot oven to cook it through to al dente and tinge the edges of the shells a lovely rich brown.

Serves 6 to 8 (it may not seem like enough for 8, but this pasta is incredibly rich)

1. Heat the oven to 400 degrees. Halve the pumpkin and scoop out the seeds. Cut the pumpkin into 8 equal wedges and arrange on two baking sheets lined with foil. Sprinkle the wedges with salt and pepper and drizzle lightly with olive oil. Bake for about an hour, until the pumpkin is caramelized and tender when pierced with a sharp knife. Remove from the oven and let cool until you can handle the pumpkin without burning yourself.

2. In the meantime, crisp the pancetta in a medium saucepan over medium heat, about 10 minutes. Remove and drain on paper towels, discarding the fat.

3. Turn the oven up to 500 degrees. Bring a large pot of salted water to a boil. Cook the pasta for exactly 5 minutes, drain and run cool water over it for about 10 seconds. Set aside in the colander.

4. Scoop enough of the cooked pumpkin from the rind to make 2 cups. Combine this with the cream in a blender and puree just until smooth (be careful not to overblend, or you’ll whip the cream). Scoop out some more of the pumpkin (you probably won’t need the whole thing) and chop roughly to make about a cup and a half.

5. Combine the pumpkin and cream puree with the cheeses, salt, thyme and pancetta in a large bowl and stir gently to combine. Add the pasta and the chopped pumpkin and fold together just until combined.

6. Spread the pasta evenly in a casserole or baking dish. Bake uncovered for 7 to 10 minutes, until the top is browned and the bottom layer of pasta is just tender.

Betty I. October 28, 2013
Hi cant wait to try this but was wondering if you can use regular pumpkin if cheese pumpkin isnt available? Thanks!

Summer O. October 28, 2013
I find pumpkin kind of bland myself, I use butternut squash.

Rivka January 6, 2011
Making this tonight (w/o pancetta, sadly): just tasted the pumpkin-cream mixture, and it dawns on me that this would make an awesome base for custard....yum.

beejay45 March 28, 2013
Mmmm. Or mix into a risotto with a nice white wine and a dash of ground coriander or nutmeg.
I'm going to try this technique, anything to speed hings up. And use of leftover cheeses. The pumpkin and pancetta are genius touches, though.

Vermeer_Groupie October 30, 2010
I am making this tonight!!! I have been so excited about this recipe since it first popped up on the site and now I get to eat it!!!

bobzaguy October 28, 2010
A very good friend (and avid Food52-er) tried out this recipe for my birthday this past week. She used acorn squash instead, as no one (in the Chicago stores she shops) knew what a cheese pumpkin meant.
Quite fantastic anyway! She regularly uses canned pumpkin as a fiber source for her recipes but wanted to go the fresh route this time.
She also added something that put the already flavorful dish completely over the top...a small bowl of crushed red pepper flakes to spoon over the dish. A quick dusting of the flakes brought out the thyme spice and with her selected bottle of Chilean Sauvignon blanc, the pasta sang from beginning to end.

Merrill S. October 30, 2010
What a great idea! I may try this again with red pepper flakes tomorrow.

nazhamster85 October 26, 2010
I'm new to Food52, but this looks like such a fabulous and fun website that I will come to frequent! This recipe just looks amazing! (I'm also not *too* experienced of a cook, but love to experiment and have fun) Would the cooking time change too much if you cooked this in ramekins instead? Thanks!

Merrill S. October 30, 2010
Welcome to food52! I think the cooking time should be about the same if you did it in ramekins -- maybe check it after 5 minutes?

Summer O. October 24, 2010
Merrill - We made this this evening - a home run with everyone (adults and kids). From what I hear, its presence is demanded on the Thanksgiving table.

cookiebakerXL October 24, 2010
What about using half and half instead of cream or even soy milk or almond milk? Always trying to keep the calories and cholesterol under control yet maintain quality.

gaelg October 27, 2010
eat less and enjoy the real taste is the only answer

Merrill S. October 30, 2010
You could probably use half-and-half, but I wouldn't recommend soy or almond milk. You can also just use less cream if you'd like.

DianneD October 24, 2010
Is there any substitution for the heavy cream that you would recommend?

TheNostalgicBaker October 24, 2010
I use whole milk in mac & cheese all the time and I actually prefer it. I substitute it cup for cup.

Merrill S. October 30, 2010
I think using whole milk wouldn't be quite the same here. You could use less cream (1 cup) or maybe try half-and-half.

LisaCooks October 24, 2010
I went to RISD and it was fabulous then. Went back last year and it was just as incredible as I'd remembered. Am in culinary school now, would love to trail there for a day...

guineverek October 24, 2010
Oh my! I need to have a dinner party because if I made this just for myself, I would surely eat it ALL!

laurielufkin October 24, 2010
Here's my question--and I hope I don't get too much flack for asking--but can I use canned pumpkin puree instead to make this recipe a little easier? Sometimes I have the time to roast pumpkin, sometimes I don't. Thanks!

Merrill S. October 24, 2010
Hm -- hadn't thought about that. You won't get the little pieces of roasted pumpkin nestled among the shells, obviously, but if you're in a rush, canned pumpkin (I'd use organic) should work fine.

wendygdi October 24, 2010
1st time poster and new to your web-site So far, it looks great. I'm a big fan of Amanda Hesser and her book "Cooking for Mr. Latte" and her husband writings in the New Yorker. Living in the Northeast, I've known about Al Forno for years, but have never been there. Someday soon, I hope. If you haven't already done so, you should research the old Julia Child show, Cooking with Julia, where she had one of the owners of Al Forno, the wife (I can't remember her name), on as her guest cook. It was absolutely charming.

Merrill S. October 24, 2010
Thanks for your nice comment, and welcome to food52! Will definitely look up that episode.

Sagegreen October 24, 2010
Al Forno postdates my tenure as an undergraduate in Providence. I really look forward to returning to have dinner there one of these days. Meanwhile, thanks for giving us this creamy pumpkin delight!

thecrabbycook October 24, 2010
I've got daughters at school in Providence...it's been three years now and we've never been to Al Forno because we don't have the patience. One daughter tells me you CAN make a res., if you are six or more, but that means assembling six people desperate for pasta.
Maybe before they graduate we'll get there, but meanwhile I'm SO making this recipe, which looks like it would take less time to make than the wait at Al Forno!...

annalea October 22, 2010
Made this tonight - in the oven right now! I can't wait - this looks like another great one Merrill. Thanks!

I need a veggie option for dinner this evening. Would skipping the pancetta change this dish too much?

Merrill S. October 24, 2010
So sorry, somehow I missed your comment the other day -- did you end up making it without the pancetta? I think it should still be pretty tasty!

Jamie S. October 21, 2010
No one does baked pasta better than Al Forno! I hope you had the chance to sit at the bar and chat with the wonderful Kyle.

Merrill S. October 21, 2010
It was so crowded that it was nearly three deep at the bar the whole time we were waiting. Next time, we'll definitely make a point of finding Kyle -- thanks for the tip!