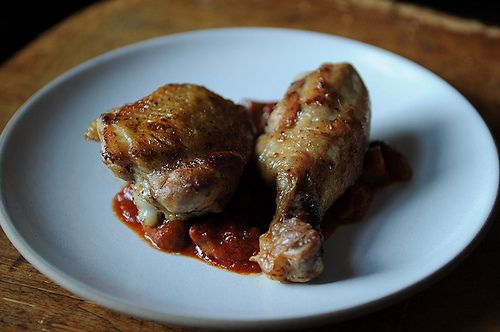 Each week, over the next few weeks, I'll feature recipes from different eras that appear in The Essential New York Times Cookbook. But before I get started with this week's recipe, I want to give you the link to my book's Facebook page -- here you'll find all of my events, photos, video (soon), and a template for throwing your own Potluck Party. So come on by, fan the page, and tell everyone you've ever met!
Now, onto Chicken a la Marengo...

Some readers may be disappointed that I didn’t include Craig Claiborne’s Chicken Marengo, which I’d heard from older friends was the dish to serve in the 1960’s. I made two of his versions and liked them, but then I tried this much older recipe and thought it blew Craig’s away. His were uniform, polite, their sauces thickened with flour; this one reminded me of the kinds of country home cooking you find in Italy. You get crisp pieces of chicken, a whiff of garlic, some mushrooms and a concentrated oil-slicked wash of tomato.

According to Larousse Gastronomique, the original dish was created by Napoleon's chef after the battle of Marengo (although The Oxford Companion to Food points out that tomatoes were not used in this way at the time). It is said to have been garnished with crawfish and fried eggs – hardly what we think of as battlefield fare.

This recipe appeared in the Times in 1908

1. Pour the can of tomatoes into a small saucepan. Crush the tomatoes using a potato masher or fork. Add the carrot, celery, onion and parsley. Bring to a boil, then reduce the heat and simmer until thickened and reduced to about 1 cup, about 40 minutes. Season with salt about halfway through.

2. Press through the fine disk of a food mill into a bowl, then stir in 1 tablespoon butter and check the seasoning. (Should make about 1 cup.)

3. Melt the remaining 1 tablespoon butter with the oil in a 12-inch sauté pan or casserole over medium-high heat. Add the garlic. Season the chicken pieces with salt and pepper. Add the dark pieces to the pan. Once they begin to get crisp on the edges, reduce the heat to medium. After 5 minutes, add the breast pieces. Turn the chicken as it browns and remove the pieces to a platter as they finish cooking, 15 to 18 minutes total time. After 15 minutes, add the mushrooms to the pan, season them and cook until lightly browned and cooked through – they may need to cook for a few minutes after the chicken has been removed.

4. Remove the pan from the heat and spoon off all but 1 to 2 tablespoons of fat, Add 1 cup tomato puree to the mushrooms and stir up any bits stuck to the bottom of the pan. Simmer until the sauce thickens and forms a glaze with the fat in the pan. Taste and adjust the seasoning.

5. Spoon the sauce over the chicken.

A C. October 25, 2010
Reading the conversation was as entertaining and as educational as reading the post. I hope to keep up with this one!
:)
Valerie

Jane E. October 25, 2010
I will try this as published, and then try it with the carrots, etc., caramelized as the writer above suggests. My guess is after shoving the vegetables through the food mill there won't be that much difference. If I can get away with eliminating one step (cooking dinner on a weeknight before grading papers), I'll do it.

I look forward to your cookbook. Amanda, you once asked readers to send in favorite Times recipes and I was too lazy, but here they are: the Sterns' Chicken Paprikash, and FDR's Country Captain. We eat lots of chicken.

anyone October 25, 2010
Jane, I think if you look at the steps of the original recipe and then the suggestion I made you will find that there really isn't an extra step to carmelize the mirapoix. It's just reversing the order in how it's done. It's also been my experience that flavors don't really change after running through a food mill. But, I must say I made this recipe this weekend (with carmelized mirapoix) and it's outstanding. I'm so glad Amanda posted this. I'm not big on cookbooks but this recipe has piqued my interest. If she posts another recipe that sounds as good and is as good as it sounds I'll probably have to buy the book.

Amanda H. October 29, 2010
Both Chicken Paprikash and Country Captain are in the book -- not those versions but hopefully others that you'll like!

Waverly October 24, 2010
Amanda, I am loving this book - the recipes all look wonderful but when you put it into context with personal stories and timelines, it makes for an absorbing book. Congratulations to you, to Merrill, and to everyone else who participating in making this great book.

phyllis October 24, 2010
My copy has shipped and will be here on Monday. Craig Claiborne's Chicken Marengo was the first non-mother dish I cooked. I loved it. I haven't made it in 25 years, but will try yours soon. Can't wait to receive my book. Congratulations, again!!!

marcella F. October 24, 2010
The legend goes, I seem to remember, that Napoleon's cook was short in supplies and had to make do with what he had on hand - and crawfish, or some other kind of freshwater shrimp, were apparently plentiful in the Tanaro river, close to the battlefield.
Just my two cents :)

anyone October 23, 2010
This sound great, but I just don't understand why you would add the carrots, onion and celery to the tomato mush rather than giving them a nice saute to a point of carmelization and then add the tomato and bring to a boil.

betteirene October 22, 2010
I GOT IT! Came home, and there it was at my spot at the dinner table. The first page I happened upon was 388, the story of Bob the Sea Cook. Then I turned to 604-605: The recipe for Spiced Hard Sauce is one that I served with my gingerbread cake; one of my sons' teachers sent home the recipe for Three-Day Marmalade and we made it about 30 years ago; I was reminded of why Craig Claiborne's recipes and I do not get along (Beat the egg yolk, and add 1 teaspoon of it to a bowl {discard the rest} is the first sentence of his recipe for Creamy Salad Dressing). I turned the page and found the recipe for Schrafft's Hot Fudge--I'm babysitting a couple of grandkids tomorrow, so guess what we'll be doing. A&M, et al.: What Alice Waters said. It is an important book. Please excuse me for a few days while I immerse myself in it.

Amanda H. October 29, 2010
Thanks -- hope you're enjoying it, and finding other good memories.

Bevi October 22, 2010
I can't wait to buy this book. You and Merrill have put so much loving care into this endeavor.

mrslarkin October 22, 2010
That sounds yummy, Bobby! You should post your version of that dish, too.

pierino October 22, 2010
Bonaparte: "Glory is fleeting but obscurity lasts forever". During the Napoleanic wars they didn't have MREs.

Gale October 22, 2010
I received the book a few days ago and think you (both) did a terrific job. It is so well written (love the headnotes and cooking notes)and a wonderful selection of soon to be favorite recipes at my house. I really used all the old Claiborne & NYT books which have fallen apart from use but this is a more than worthy successor. The care and time researching and testing is obvious and I know it will be a great success. Congratulations on a great accomplishment

mklug October 22, 2010
Wouldn't it be great if that were typical battlefield fare, though?

Always glad to have a "new" chicken recipe. Besides, I love the idea behind this new book. I'm still carrying on with my childhood love of making believe, so I just know that I'll be cooking out of this book and pretending I'm a glam '60s hostess, or a pampered lady of the Gilded Age, or what-have-you.