Today: Lara Hamilton, owner of Seattle’s cookbook shop Book Larder, she knows a thing or two about cookbooks (and cooking from them—her shop has a kitchen!). Here, she shares the five things you can only learn from spending quality time cooking with a book—specifically, Cairo Kitchen. 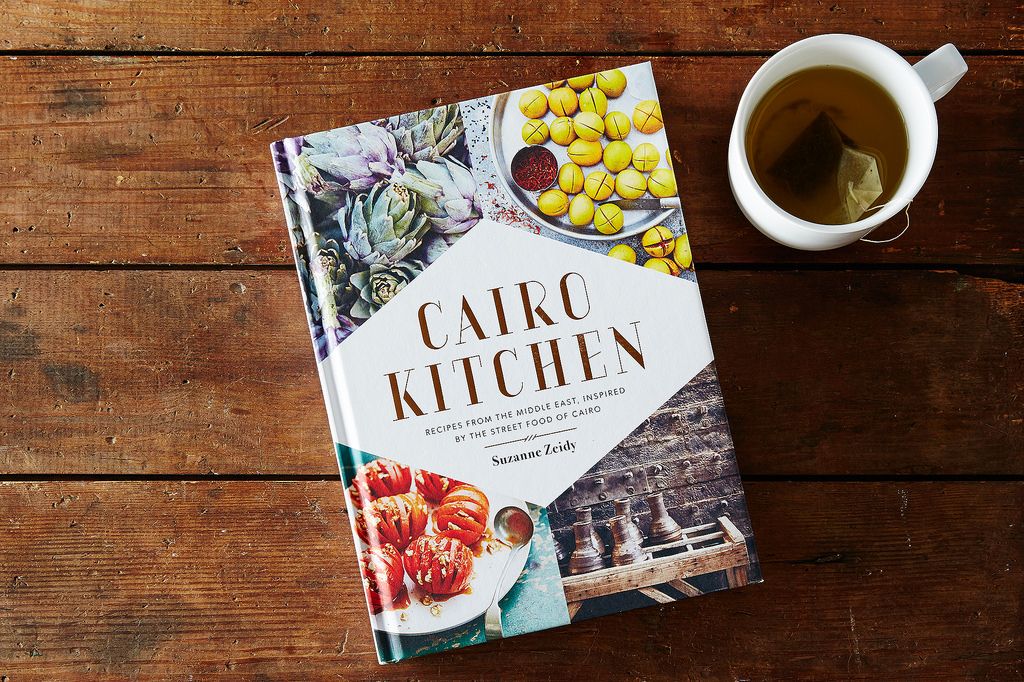 When a couple of customers (who happen to be young chefs) came to my cookbook shop and declared Suzanne Zeidy’s Cairo Kitchen to be their new favorite book, I was intrigued and decided to take a closer look. I brought the UK edition of the book into the shop, then cooked from it at home and with staff in the kitchen at Book Larder. It's full of dishes from Zeidy's Egyptian restaurants in the UK, but is by no means restaurant food. This became really clear when I cooked from it. Here are five takeaways I just had to share: 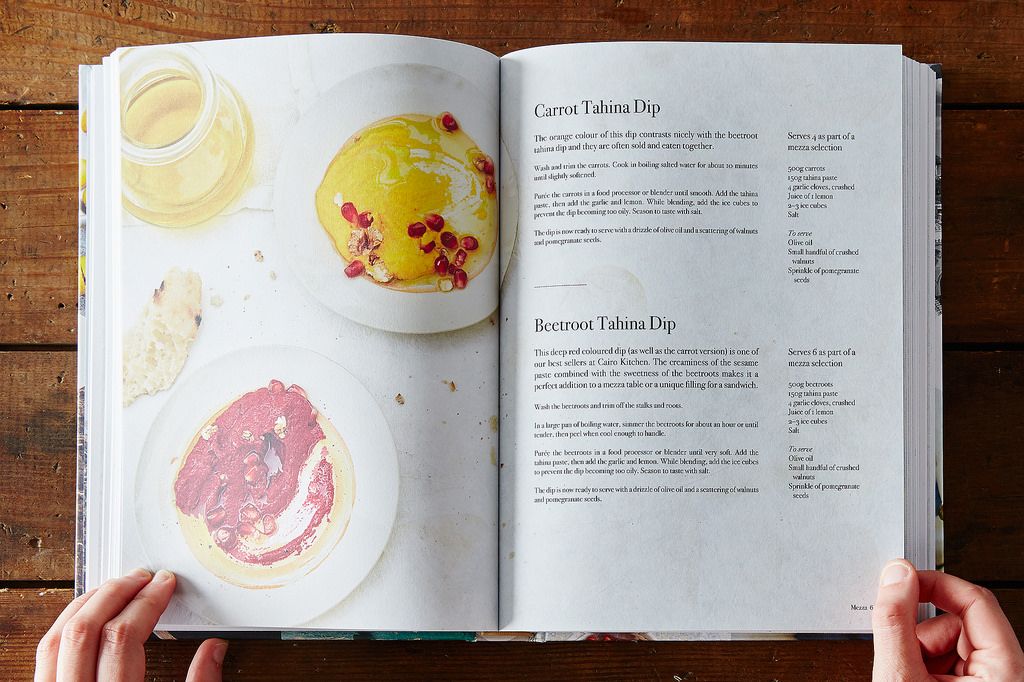 1. Tahini is for more than just hummus.
Zeidy includes several mezze recipes that are simply cooked vegetables, garlic, and tahini blitzed in the food processor, sometimes with spices and a squeeze of lemon. Since I’ve always been more into baba ganoush than hummus because of the beany taste that can dominate hummus, I tried out the Beet Tahina Spread. Boiling the beets took away the funky, dirty edge that can put some people off the root vegetable, and blending them with tahini created a sweet, earthy, nutty spread that was great just eaten from the bowl.

More: A hummus that shines in spring—with peas.

I like recipes that can serve multiple purposes, so later in the week I used the spread in a fridge-cleaning supper, tossing it with whole wheat pasta, roasted broccoli, tofu, and toasted walnuts. Book Larder’s Culinary Director, Kyle Wisner, also suggests thinning the spread with a bit more oil and lemon to create a vinaigrette for salads and grains. In other recipes, Zeidy shows us that tahini-based dip can also include carrots or red peppers, instead of beets or garbanzo beans. It is a base that can be used with lots of vegetables—I’m planning to try it with zucchini this summer and maybe even parsnips next winter. 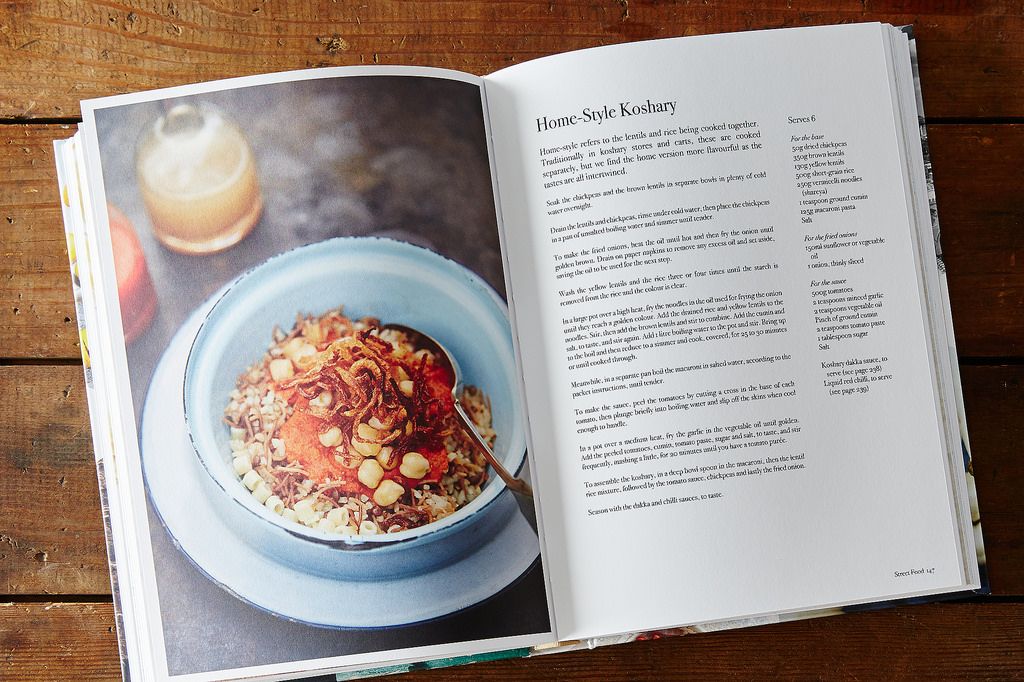 2. Eat beans with noodles for a nutritious comfort food.
We had to make koshary, the traditional street food that inspired Zeidy to open Cairo Kitchen. It's a quintessential dish of lentils, rice, macaroni, shareya (vermicelli noodles), chickpeas, and tomato sauce that's then topped with fried onions. The koshary itself is essentially a one-pot wonder: The onions are first browned and drained, and the starches are then cooked in the onion-flavored oil in the same pan.

This is a fantastically versatile family dish, as everyone then customizes their bowl, adding the sauces and any other toppings on hand (herbs, nuts, meat) to suit their taste and appetite. It was a bit time-consuming because, in addition to the tomato sauce, the dish is also served with homemade dakka sauce (spices, garlic, and vinegar) and red chile sauce (red chilis in oil with a bit of lemon), but the result was light and comforting at the same time. 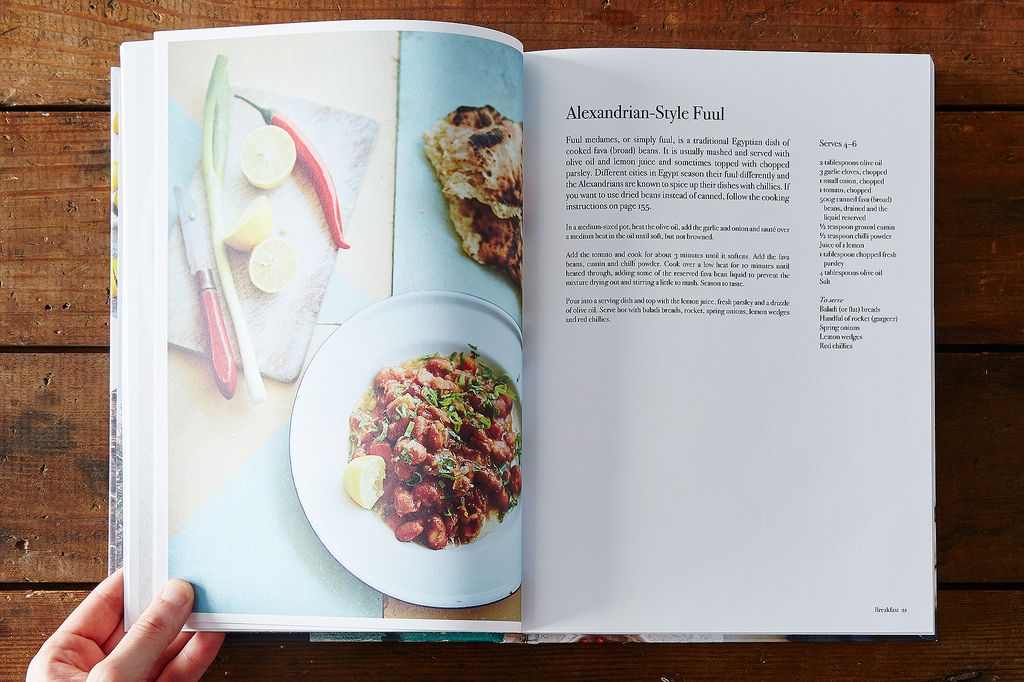 3. Fava beans don’t have to be so much work.
When I see fava beans on a restaurant menu in spring, I always order them. I love their rich texture and appreciate that someone in the kitchen went to the trouble to pod, cook, and then slip them from their waxy skins. Egyptians love them, too, and use them in fuul, one of the most popular dishes in Egypt. Zeidy includes six versions of and uses for fuul in her book, and each calls for either dried or canned favas, which means no podding. I couldn’t find dried or canned beans, but frozen ones stepped in just fine. Since I’ve never eaten fuul in Egypt, I can’t say that using frozen favas was authentic, but boy was it good, especially when stuffed into warm mini pitas. I managed to save enough to put the leftovers on toasted sourdough and top it with an egg for the next morning’s breakfast, again getting extra mileage out of one recipe. I can’t wait to try the frozen favas again, this time in Zeidy’s recipe for taameya, a falafel-like street food that uses favas instead of chickpeas. 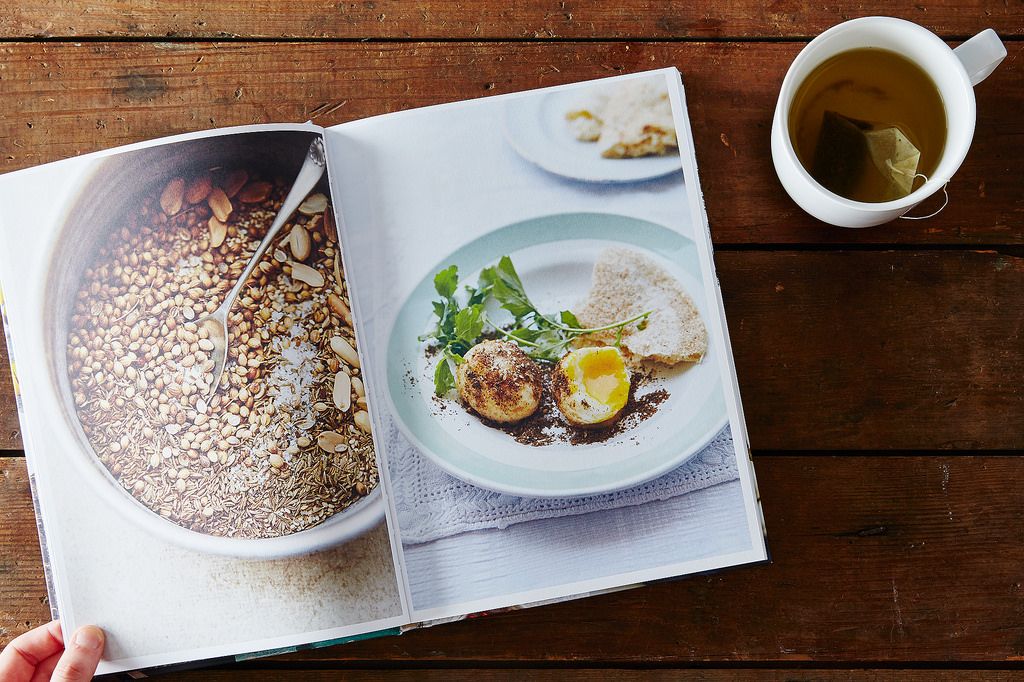 4. Homemade condiments make your boring dish better.
A full twenty-eight pages of Cairo Kitchen are devoted to condiments and pickles, not to mention all of the dressings included with recipes throughout the book. While that’s not so unusual in Middle Eastern cookbooks, what sets these recipes apart is that most of them contain only a few ingredients and are very simple to make. Take Zeidy’s version of dukkah, the ubiquitous spice-and-nut blend that varies greatly throughout the region. The recipe I typically use has ten ingredients, while Zeidy’s has just four. Her blend of toasted cumin, coriander, sesame seeds, and peanuts was great on hard-boiled eggs, sprinkled on a salad, and would make a lovely rub for lamb or even chicken. The leftover dakka sauce from the koshary brought spicy acidity to roasted cauliflower. Having just a couple of these key add-ons can really boost my efforts to cook at home, sometimes providing inspiration for a meal (what do I want to put that chili sauce on tonight?).

More: A dukkah recipe that uses pistachios instead of peanuts. 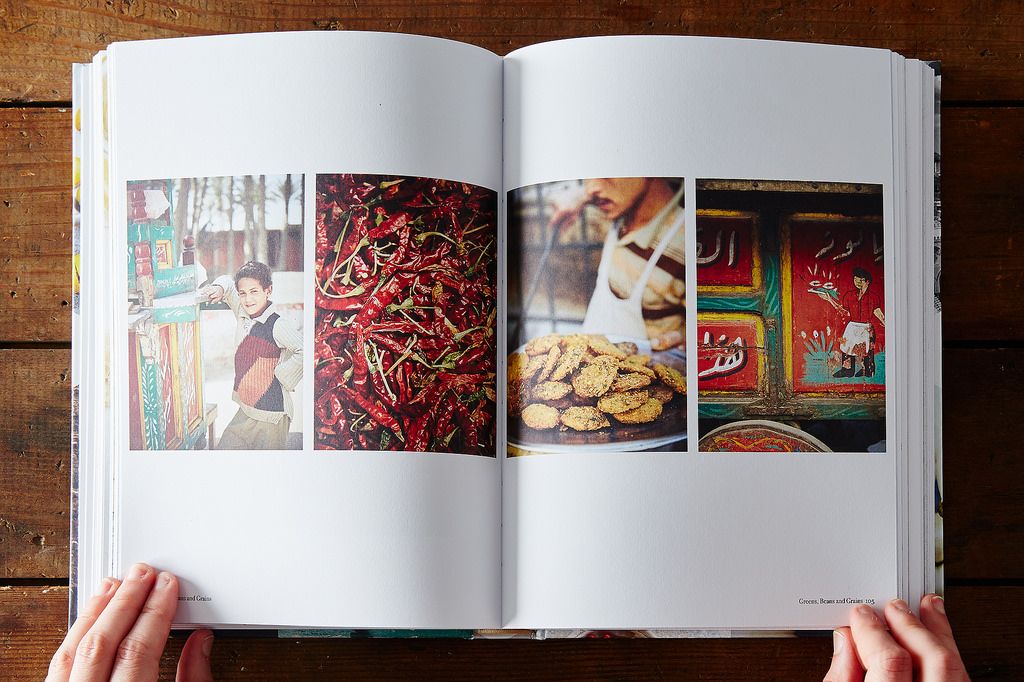 5. If I go to Cairo, I’m eating on the street.
Like many cities whose restaurant culture was built around the tourist industry, Egypt’s restaurants typically serve anything but Egyptian food. Locals get their meals from street vendors or cook for themselves, so, in addition to wrangling as many invitations to eat in homes as I can, I’ll also enjoy meals standing up. Cairo’s street food looks incredible: spiced vegetables and pulses served in bowls or stuffed into warm baladi bread, a plate of taameya with salad and garlicky yogurt, or the layered pastry fateer, brown with honey and nuts. Or, if I do feel like settling into a restaurant, I’ll just eat at Zeidy’s Cairo Kitchens and benchmark my home efforts against the real thing.

What books are you loving cooking from right now?

Janice L. July 8, 2015
I am half-Egyptian, born in Canada, and I LOVE Egyptian food. I have never been to Cairo. My dad moved to Canada over 40 years ago for so many reasons, and I respect his choice. Anyways, all that to say, that the Egyptian food that I know and love is the Egyptian food that we cook at home and share with family. And so, from my experience, we really do eat ful and koshary. Those 2 dishes are my comfort foods. There must be a can of fava beans in my pantry at all times so I am ready to make ful for a quick breakfast, lunch, or dinner whenever I crave it. All the condiments/pickles with serve with our meals are key too. We love stuffed vine leaves with lamb. There's a lot of Mediterranean influence as we have dishes like moussaka...
Again, I have never been to Egypt so I can't talk about the street food or the restaurant situation, but family-cooked Egyptian food is delicious! I'd definitely love to check out this book :)

Zeina July 8, 2015
I second roxlet's comment. Cairo is one of the worst places for food beyond the pita and foul based falafel-like tameya. Street food is sharwarma in hamburger buns and one of the most 'authentic' restaurants in downtown cairo was underwhelming. Koshery is a carb mash up and not something i look forward to eating in the heat. Foul as the morning dish is treated with a chemical to make the cooking process faster. The sinai has great and cheap fish.

roxlet May 6, 2015
I lived in Cairo, and I never experienced a place that was less about food than that city. Sure, koshary, if you like it, and tameya, but most upper class Cairenes pride themselves on their ability to afford to eat in luxury restaurants, like MacDonald's, which is considered the ultimate place for a luxe date. The best Egyptian restaurants in Cairo are Lebanese, and even those are pretty mediocre at times. I would be interested to read this book to see what I missed in a year of living there...

witloof May 5, 2015
California Garden {http://californiagarden.com} makes absolutely delicious canned fava beans. If you contact them, they'll tell you where you can buy their products in your city. Goya also has canned favas which are pretty good. I've never seen frozen fava beans here {I live in NYC} but will have to seek them out. I bet they're delicious.

LaraBKL May 5, 2015
Thank you for the tip--I'm sure that if I look beyond my local Whole Foods I'll find those brands. The frozen favas are definitely worth it--they've been great in pasta with mint as well.

AntoniaJames May 5, 2015
"Genius Recipes"! Just got it last night at Kristen's book signing at Omnivore in SF, and I could hardly put it down. In a crowded field, this is a clear front runner for style as well as substance. Did you know there are many "Genius Tips" sprinkled throughout it?
This "Cairo Kitchen" seems noteworthy, too! ;o)
Author Comment

LaraBKL May 5, 2015
Isn't Kristen's book fantastic? We are hosting her at Book Larder this Thursday morning. So glad you had the chance to meet her at Omnivore--I love that place!