Today: We asked three members of the Food52 team to take the exclusive Carry-On Cocktail Kit with Spiced Travel Nuts by W&P Designs on their next trip. Here's what happened. 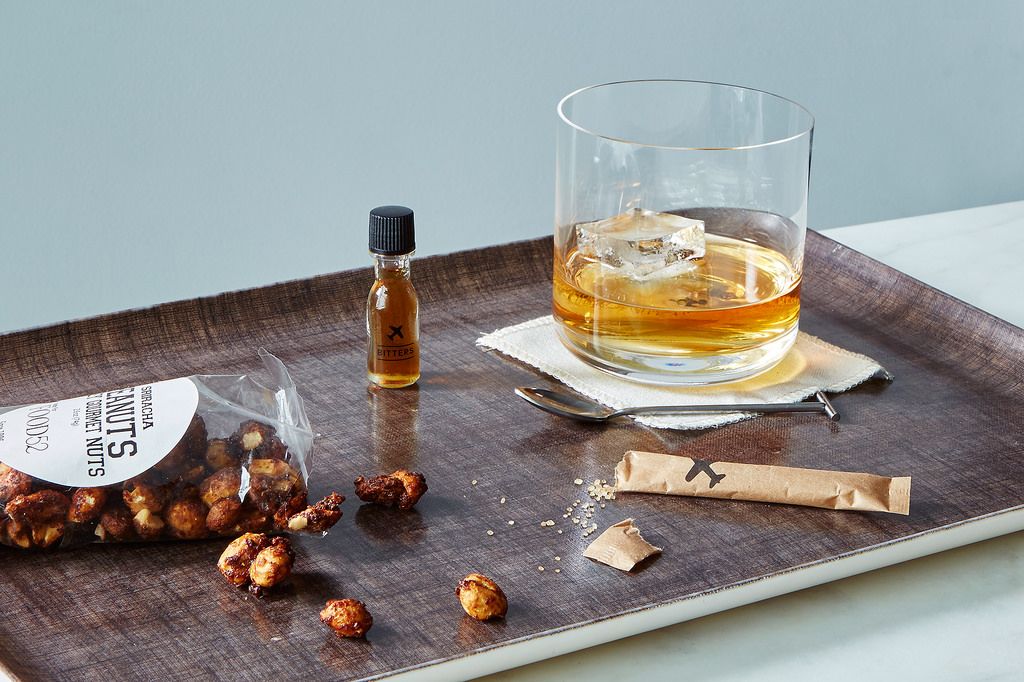 If you had visited Josh Williams and Eric Prum's college dorm at the University of Virginia, you would have found shelves of Mason jars filled with peach-infused bourbon. The jars, shoved between books on product design and cooking, weren't for their own party, but for their catering company. After Josh took a year off to attend a culinary school in Italy, he and Eric spent their senior year catering and bartending for weddings. Flash forward several years and one successful Kickstarter campaign later, and their "catering company" has evolved into W&P Design, now a team of eight people dedicated to creating original food- and drink-related products.

This week, W&P Design launched a Carry-On Cocktail Kit with Spiced Travel Nuts exclusively for Food52, with everything you need to mix your own Old Fashioned at 30,000 feet. Just order your alcohol of choice during beverage service (as long as it's bourbon) then use the included muddler, bitters, and sugar to transform your mini bottle into a professional cocktail—the kit makes two, so feel free to get comfortable or make a friend. Sip your concoction while you snack on peanuts that are paired to the drink (including Coconut Curry Peanuts, Spiced Cocoa Peanuts, and Coffee Stout Cashews). To celebrate the launch, we asked three members of the Food52 team to take the kits with them on their upcoming flights (who said traveling for business isn't fun?): 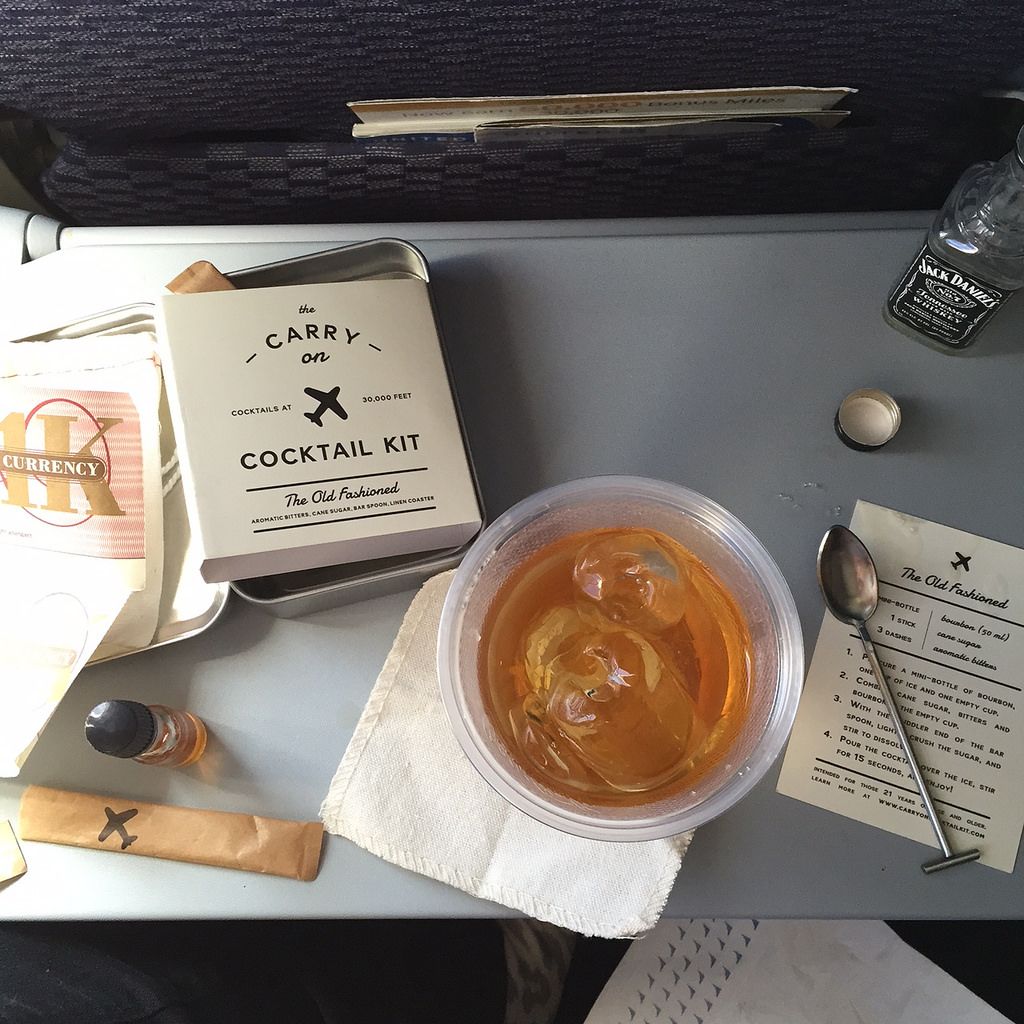 Kristen Miglore, our Executive Editor, who brought the kit along with her on a flight from San Francisco to Seattle for her book tour for Genius Recipes says:

"I don't usually order a drink on planes, but having the Old Fashioned kit on hand corrupted me in the most civilized way. A stash of airline drink tickets from my future father-in-law made it that much easier (a good tip if you're gifting kits!)." 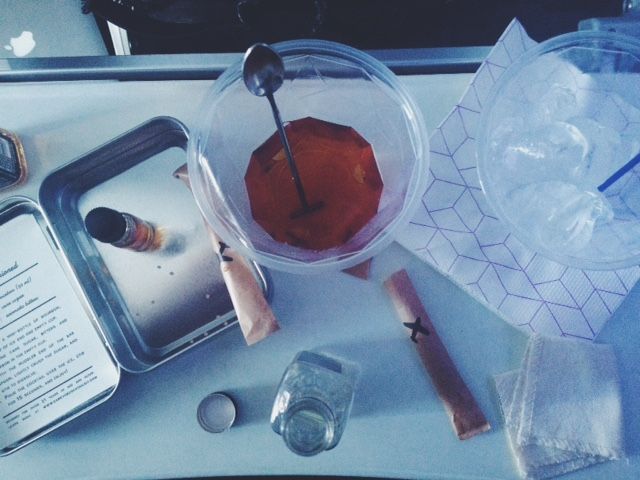 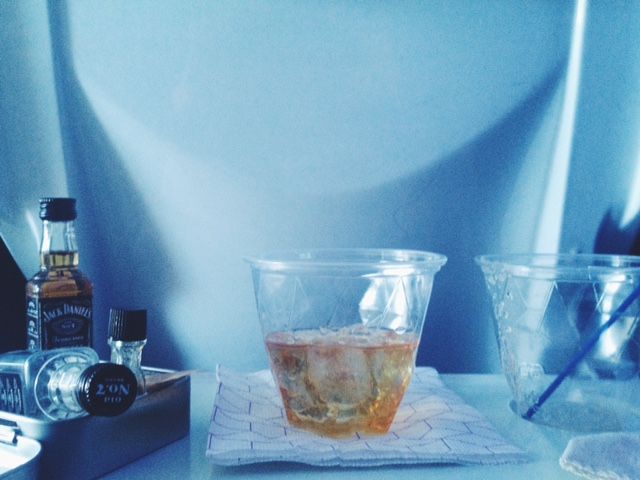 Samantha Weiss-Hills, our Partnerships Editor, took the Old Fashioned kit on her flight from Dallas, Texas to New York. She says:

"The Carry-On Cocktail Kit was a conversation starter for me! An Old Fashioned is a perfect cocktail for this—minimal effort and flavorful from bitters and a little cane sugar. One of the cabin crew who was serving drinks asked me all about it and then gave me a free bottle of bourbon, too!" 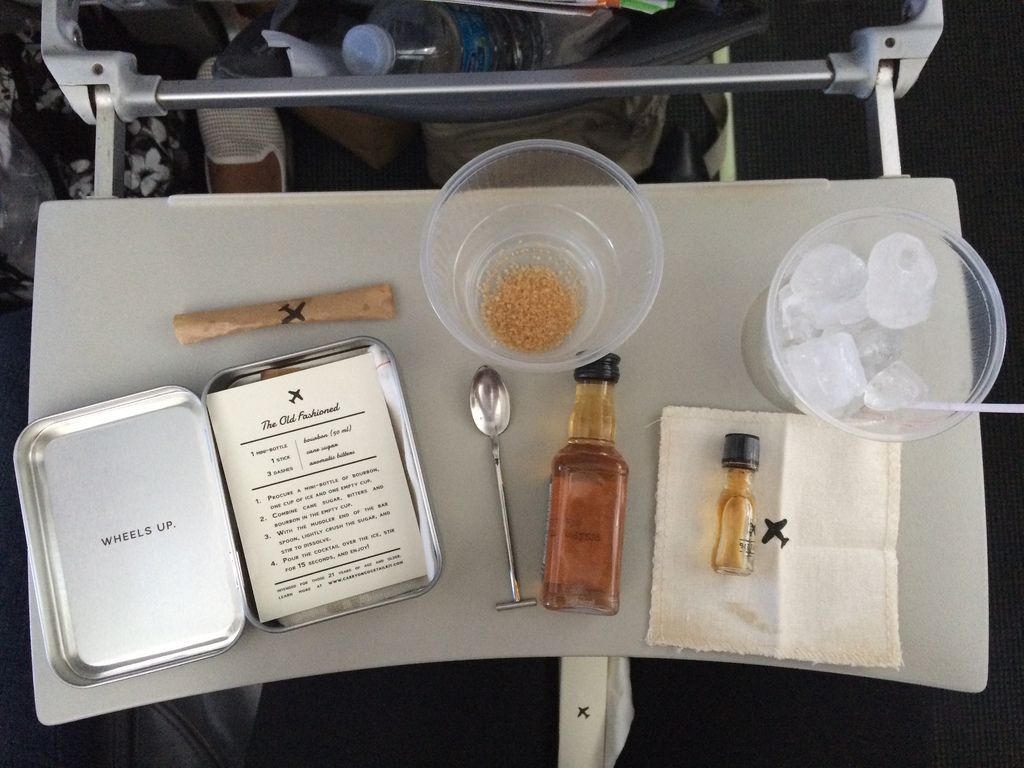 Gabriella Mangino, our Senior Manager of Brand Experience, started out trepidatious, then loved the kit:

"I'll start by saying that I am not an in-flight drinker, so I was a little nervous about the assignment to mix an Old Fashioned on my afternoon flight from Seattle to New York. My nerves only got worse when I discovered there was a two-year-old sitting next to me with his mom. So when the bottle of whiskey (my airline didn't offer bourbon) and cup of ice arrived, I immediately turned toward my neighbors, smiled, and said, 'I have to do this for work!'

After carefully reading the instructions, requesting a second empty cup for muddling, reclaiming various items from the cocktail kit from the wandering hands of my neighbor (the two-year old, not his mom), I was pretty satisfied with the scene on my tray table. And when my neighbors took a trip to the restroom, I decided I should probably taste the result and proceeded to slowly sip down the whole drink. Turns out a cocktail in the air is a pretty great thing." 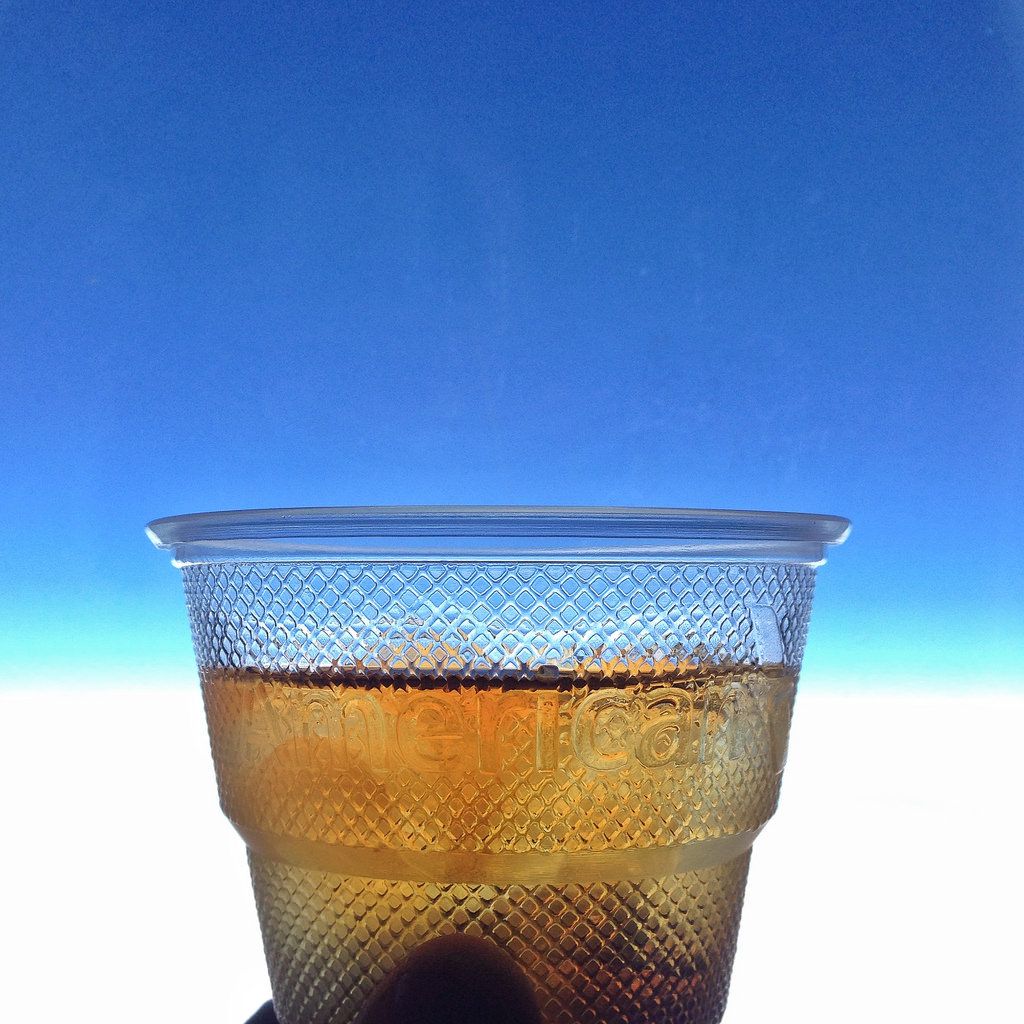 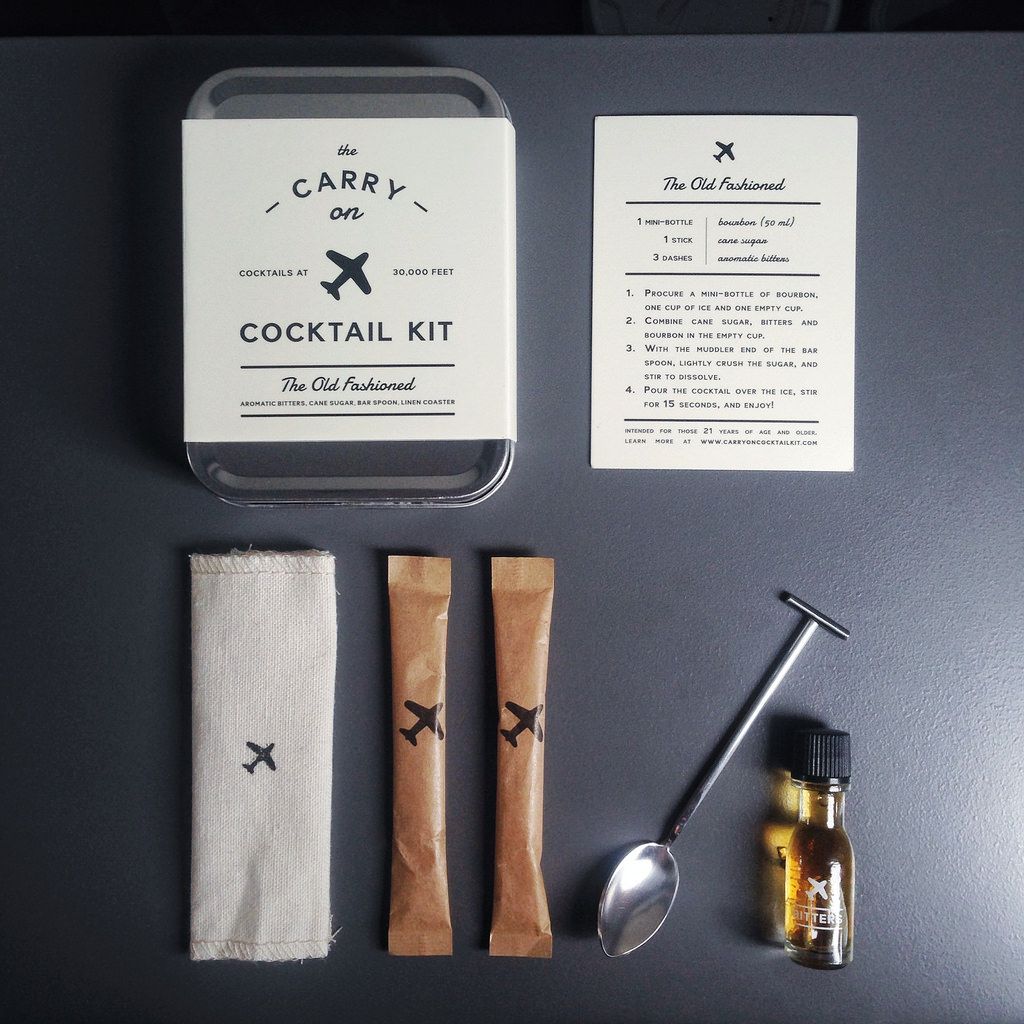 More: Learn how to make a better Old Fashioned when you're on terra firma.

"People are always totally entertained by it! Sometimes we even add citrus slices, which people love and take pictures of. People always ask about it because it looks like such a science experiment on the plane. There was one time when the person next to me actually logged into the plane's wifi and ordered one as we were flying!"

That's what we call a bon voyage. Buy your in-flight cocktail kit here.

lydia.sugarman May 26, 2015
$39 + shipping + liquor for one cocktail? A bit overpriced perhaps for some twee details? You can carry on unlimited containers as long as they don't exceed 3 oz. each. Easy to replicate, down to the little metal box. Thanks for the idea!
Author Comment

Kristen M. May 26, 2015
Lydia, the kit makes 2 cocktails (at least -- there's enough bitters left for more) and there are 3 kinds of our own spiced nuts included for (very) upgraded snacks.

lydia.sugarman May 26, 2015
That should be made clear. There is nothing to indicate that to be the case.

lydia.sugarman May 27, 2015
Thanks, Kristen. I appreciate that. I *did* look on both sites and didn't notice any mention of the kit making more than one cocktail and the in-flight accounts didn't say anything about more than one drink.

Luke F. May 26, 2015
Jack Daniels is a Tennessee Sour Mash, not bourbon. Bourbon is made in Kentucky.
Author Comment

Leslie S. May 26, 2015
Jack Daniels is cheating a little bit since some flights don't have bourbon, but that fact that bourbon is made in Kentucky is actually a common misconception! While there's a Bourbon County in Kentucky that happens to make a lot of bourbon, bourbon is defined as any straight whiskey made from at least 51 percent corn that has been aged in new charred oak barrels in the United States. This page has more info if you're interested! https://food52.com/blog/12717-6-things-we-managed-to-learn-while-whiskey-tasting

lydia.sugarman May 26, 2015
Leslie, you're right that bourbon is made elsewhere than just Kentucky, just like champagne is made elsewhere than the Champagne province. However, bourbon hasn't been produced in Bourbon County since the early 20th century. All distilleries were destroyed with the advent of Prohibition. (http://en.wikipedia.org/wiki/Bourbon_County,_Kentucky). The Kentucky Bourbon Trail (http://kybourbontrail.com/map/) basically runs past the farm where I grew up in Washington County, an original Kentucky county, where my family settled on their Revolutionary War land grant. While we might *have* to acknowledge bourbon made elsewhere in the US, we will still insist that the real bourbon comes from Kentucky.

By the way, it's "terra firma" not terra forma.

Leslie S. May 26, 2015
Glad to see you agree!! It's such an interesting history. Champagne though is a different story, since it does have to be made in Champagne, France for it to be called Champagne—but many sparkling wines are similar to it!