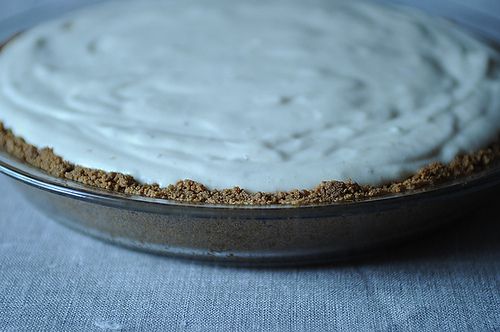 Each week, over the next few weeks, I'll feature recipes from different eras that appear in The Essential New York Times Cookbook.

In January 1970, The Times published a recipe for brandy Alexander pie. It was an unassuming confection: a graham-cracker crust filled with a wobbly, creamy mousse and enough alcohol to raise the hair on your neck and then make your neck wobbly too. Later that year, Craig Claiborne, then the food editor, declared it one of the paper's three most-requested dessert recipes (the other two were cheesecake and pots-de-creme) and ran it again. By rights, this should have been the recipe's swan song.

But thanks to Dick Taeuber, a Maryland statistician, the pie lived on. Taeuber discovered that you could use a simple formula to make the pie in the flavor of almost any cocktail you wanted (3 eggs to 1 cup cream to 1/2 cup liquor). Among the ones he came up with were the Fifth Avenue (apricot brandy and brown creme de cacao), the Shady Lady (coffee-flavored brandy and triple sec) and Taeuber's favorite, the Pink Squirrel (made with creme de almond and white creme de cacao). Each pie had a corresponding crust made with graham crackers, gingersnaps or chocolate cookies. Taeuber sent Claiborne a letter including 10 variations on the pie. By the time Claiborne responded and said he wanted to run his recipes, Taeuber was up to 20. In 1975, Claiborne renamed it Dick Taeuber's cordial pie and published it once more, this time with all 20 variations in a chart. (A complete list can be found in the book.)

Calling it a cordial pie doesn't quite capture its punch or proof. Booze pie would be more fitting. It's not the kind of thing you want to serve for a children's birthday party. “I kept going, and in 1978, I think, it was up to 50 variations,” said Taeuber, now 73 and retired. ''I mailed Craig a copy just for information. He put a note in his food column that I had copies available if anybody wanted to send me a quarter and a self-addressed envelope. The quarter was so I could pay for the postage. Everyone sent a quarter and a stamp.'' The note came out on a Monday. By Friday, Taeuber had 1,200 requests.

And then the pie went into a 32-year hibernation.

The chiffon filling will be fluffier if you let the egg whites come to room temperature before whipping.

The filling is made by folding whipped egg whites into a base thickened with egg yolks and gelatin. Be careful not to chill the base too much or the filling will be lumpy.

Chocolate shaved into curls with a vegetable peeler was once a classy garnish. Why not?

2. Combine the crumbs with the butter. Form in a 9-inch pan and bake for 10 minutes. Cool.

3. Pour 1/2 cup cold water in a saucepan and sprinkle the gelatin over it. Add 1/3 cup sugar, salt and egg yolks. Stir to blend.

4. Place over low heat and stir until the gelatin dissolves and mixture thickens slightly (it won’t be as thick as a custard). Do not boil! Remove from heat.

5. Stir the liqueurs or liquor into the mixture. Then chill until the mixture starts to mound slightly.

6. Beat the egg whites until stiff, then add the remaining sugar and beat until the peaks are firm. Fold the meringue into the thickened mixture.

7. Whip the cream, then fold into the mixture.

8. Turn the mixture into the crust. Chill for several hours or overnight.

magdance November 14, 2010
It's a boozy Bavaroise! I love the recipes redux more than anything and am making the updated grapefruit fluff (from the NY Times Magazine) for company this weekend. Think it needs a new name, though.

Cynthia L. November 8, 2010
WOW! Can't wait to try this one. It beats pouring cordials over vanilla ice cream, which is also very tasty, if you don't get carried away with the pouring and end up falling asleep on the sofa.

edna November 8, 2010
I used a mixture of burbon, grand mariner as part of the liquors, and placed a thin layer of dark chocolate on the bottom. I made a few misteps but corrected them by simply whipping the egg mixture w/ the hand blender after it set and also once again after I folded in the egg whites. Had some for breakfast this morning, GREAT WAY TO START THE DAY AFTER DROP OFF!

Amanda H. November 8, 2010
Ha! I left the one pictured above with my mom who was alone babysitting our twins for the weekend. I'm guessing it's gone by now.

Nora November 7, 2010
So I'm reading about Booze Pie and imagining some of the permutations when I notice that Food52 is suggesting I might also like a Caesar salad with goat cheese. Are you trying to save me from myself?

andriavt November 7, 2010
Any way we can get a peak at the other 30 variations that Dick came up with? I read through the 20 in the NYT cookbook, and am interested to see what other ones he came up with.

Amanda H. November 8, 2010
I'd love to share them but I have them tucked away in a box in our basement. If I ever dig them up, I'll post them here, ok?

quiltcat November 7, 2010
This pie brings back very fond memories for me! my friend Myrdene made it when we were in grad school together and i have her typed up matrix of all the possibilities...plus the cut out article from NY Times magazine. I haven't made it in years...how lovely to be reminded of it again. I'm pretty sure i'll be making it for some festive event or other this fall/winter!

sixtyfive November 7, 2010
Oh gosh I remember this! Have I really been collecting recipes for that long!?

Nora November 5, 2010
My mind is boggled by the possibilities. I must focus and take it one step at a time. I'll start with Bourbon, I think. Or should I start with Baileys? Now doesn't that sound good? Way too many choices here.

Lizthechef November 5, 2010
Lethal and delicious-sounding! I'm reminded of having once made a complete fool of myself after a few brandy Alexanders...This seems a safer approach ;)

Amanda H. November 7, 2010
Yes, and it's at the end of the meal so everyone can go home and fall asleep!

Bevi November 5, 2010
This is on the Thanksgiving dessert list at our party!!

mrslarkin November 5, 2010
OMG, i think this is my mother-in-laws infamous rum pie recipe! She doesn't give out the recipe. :) The only difference is she serves hers with lots of extra boozy whipped cream.