Today: Ever noticed that the chocolate chunks in homemade ice cream are gritty and flavorless? Here's how to fix that. 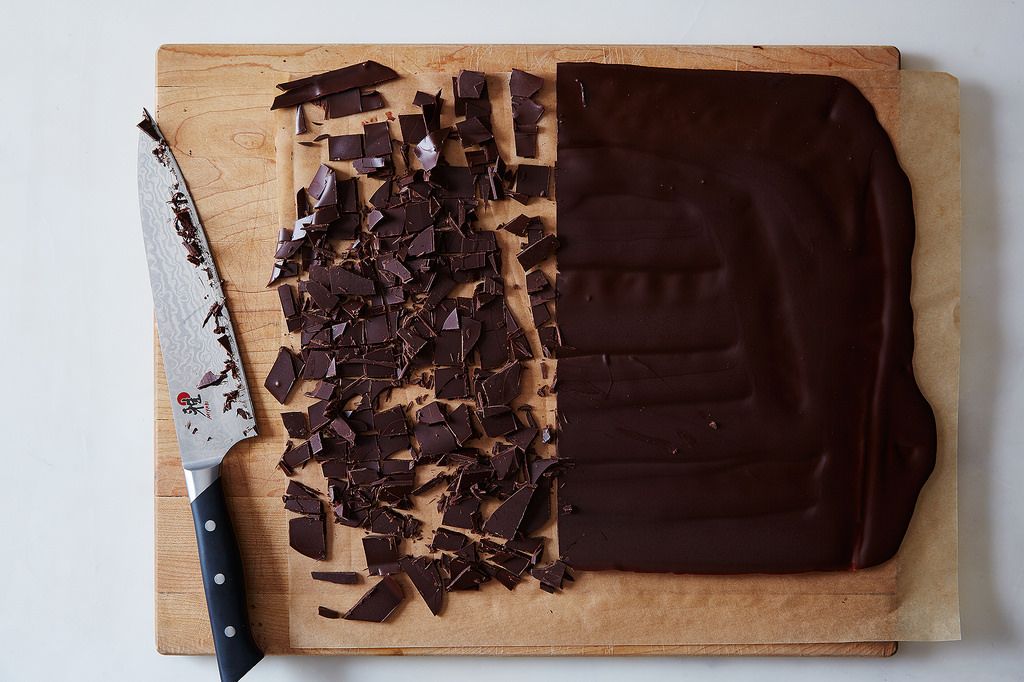 Recipes for homemade chocolate chip ice cream frequently recommend adding a chopped-up bar of chocolate—but you can do much better than that! Frozen bits of even the highest quality chocolate feel hard and gritty in your mouth. Ice cream manufacturers solve that problem by adding coconut oil to make the chocolate melt faster after the initial crunch, but the oil dilutes the flavor of the chocolate, and makes it taste cheap.

If you want crunchy chunks of good chocolate or shards that shatter and then melt with a big burst of chocolate flavor (even in a rich chocolate ice cream), it’s better to melt the chocolate, then chill it and chop it. 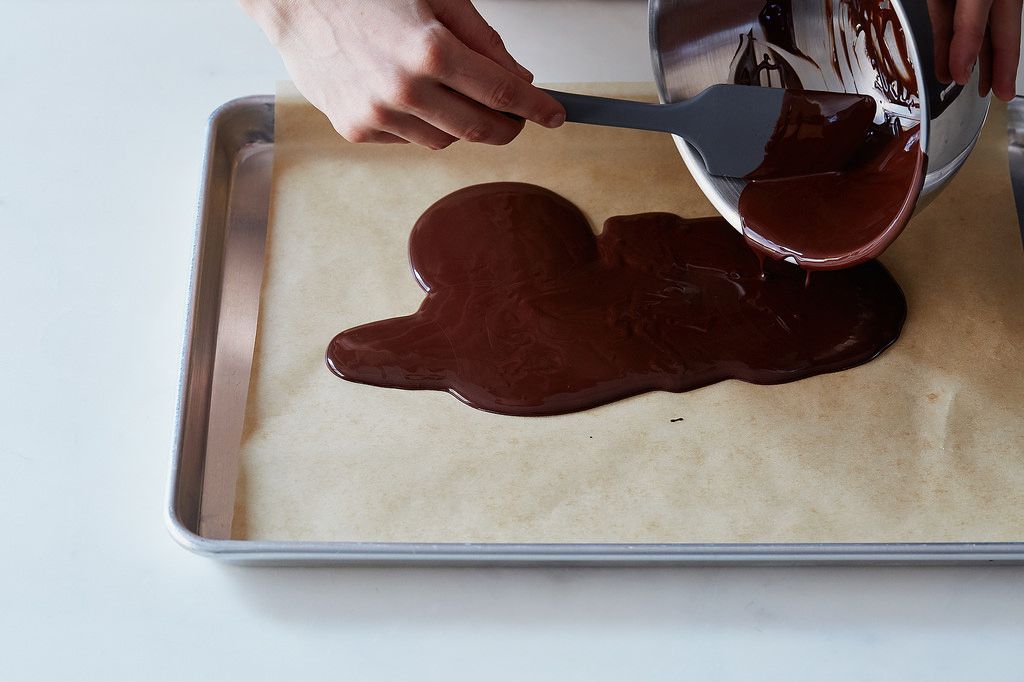 Melting the chocolate destroys the chocolate’s temper, lowering its melting point and diminishing its ability to harden except when chilled. This just means that the chocolate will be brittle and crunchy in cold ice cream, but will soften in the warmth of your mouth, releasing its flavor more quickly than do frozen bits of a chocolate bar. Tricky but good, right? You could even make fudgy instead of crunchy chunks by mixing the melted chocolate with water. Yes, you heard that right: It works so long as you add enough water for the cacao percentage of your chocolate (see the note below for more information).

Makes enough for 3 to 4 cups of ice cream

4 ounces (115 grams) milk or dark chocolate, coarsely chopped
For fudgy, rather than crunchy chips: 2 tablespoons of water, plus extra as needed

In a medium stainless steel bowl set in a skillet of not quite simmering water, melt the chocolate (if using) with the water, stirring frequently (see note). Remove from the heat and pour the mixture onto a piece of parchment paper or foil. Spread into a thin, even layer on a parchment-lined baking sheet. 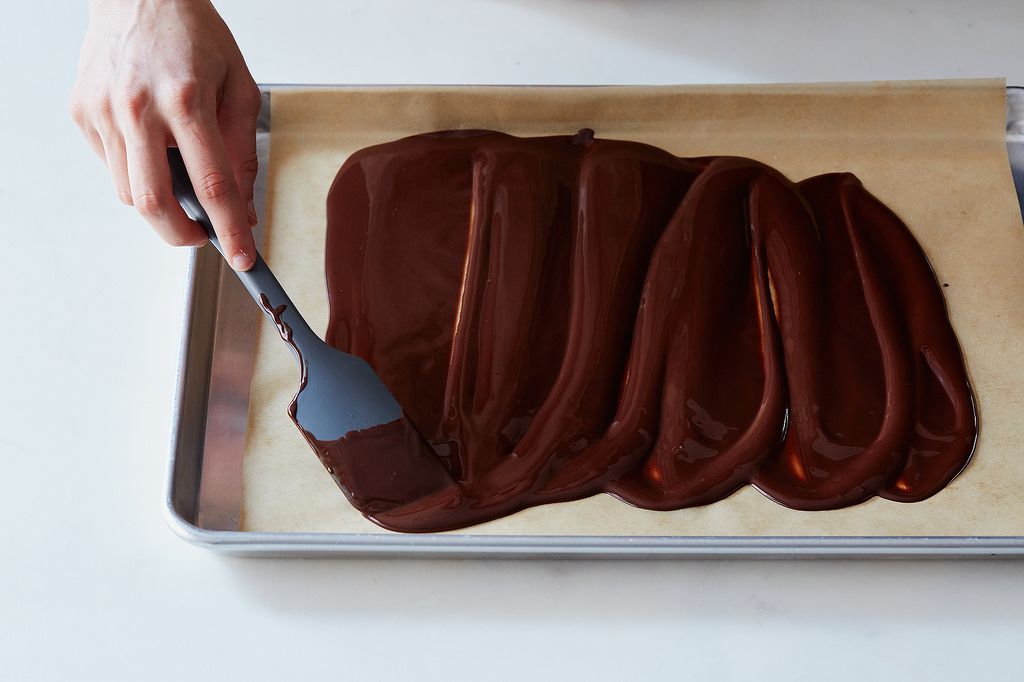 Put the baking sheet in the freezer and freeze until firm. Chop the chocolate into bits or shards and return them to the freezer until needed.

Put your chocolate chunks to use. Add them to your favorite ice cream recipe in the last few minutes of churning:

Note: The higher the cacao, the more water will be needed to prevent the chocolate mixture from “seizing.” Start with the 2 tablespoons of water for milk chocolate or dark chocolate with up 60% cacao. Work by eye: Once the chocolate is melted, stir in a few extra drops or teaspoons of warm water, as necessary, to make a smooth, fluid mixture—if it’s stiff or curdled, add water and stir until smooth. For 66% to 72% chocolates, at least an extra tablespoon of water will be needed.

Pick up a copy of Alice's James Beard Award-winning book Flavor Flours, which includes nearly 125 recipes—from Double Oatmeal Cookies to Buckwheat Gingerbread—made with wheat flour alternatives like rice flour, oat flour, corn flour, sorghum flour, and teff (not only because they're gluten-free, but for an extra dimension of flavor, too).

Evelyn T. March 14, 2016
What about melting shortening into the chocolate, rather than coconut oil or water? I've seen that technique used to soften chocolate for coating baked goods, does it work the same for ice cream?

Austin June 1, 2015
I've seen a recipe that called for drizzling melted chocolate into an ice-cream maker at the end of churning. The chocolate should be liquid but not hot - the results are flaky little ripples of chocolate throughout. Works great!

Martin B. June 1, 2015
It's called Stracciatella - very popular in Italy - David Lebovitz has a recipe for it here:
http://www.davidlebovitz.com/2007/07/making-ice-crea-1/
And, thank you, Alice for posting this. It's solved a gritty annoyance I've not know how to fix. Until now.
Cheers,
Martin