We spend more time talking about cooking from cookbooks than we spend cooking from cookbooks, and it’s time to change that. About once a month, we’ll have Cookbook Club—a meal planned entirely from a cookbook or two, new or old, big or small—and we’ll ask our community members to do the same. 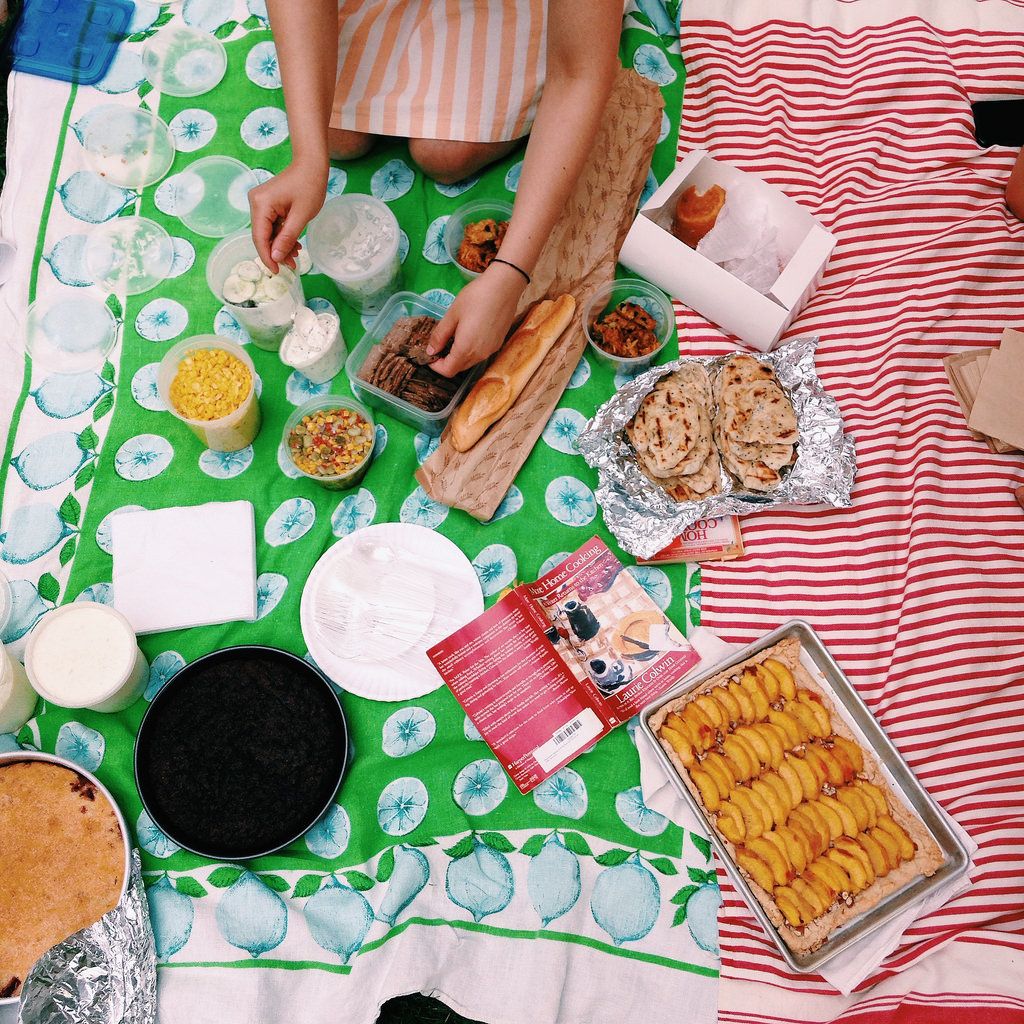 A few weeks ago, we asked for the Laurie Colwin recipes you love the most so that we could cook from her classic books and share in your admiration.

Well, we finally did it. We compiled a list of your recommendations, divvied them up (and added a few new ones to the mix), invited fellow Colwin connoisseurs and celebrity guests to join us, and got cooking. Then, we packed all of the food up and hauled it to Madison Square Park.

We ate the food on flimsy paper plates or straight out of the deli containers. We were hot, slightly dirty, and fairly hungry. Colwin's recipes are satisfying: The majority of what we tried was not revolutionary or mind-boggling (perhaps with the exception of the green sauce). Most of the recipes required we use cook's intuition—adding salt, choosing marinades, knowing how to stretch and grill dough. And since many of the dishes are explained in narrative form, a reader is asked to do more deciphering work than is required from today's newest cookbooks.

But for all the guesswork, the food was homey and creamy—the kind of food you want to share with the kind of friends who will sit in a hot park with you and eat Spiced Beef. And we had done it! We had assembled a weeknight dinner party and started eating before sunset. Thank you, Laurie. 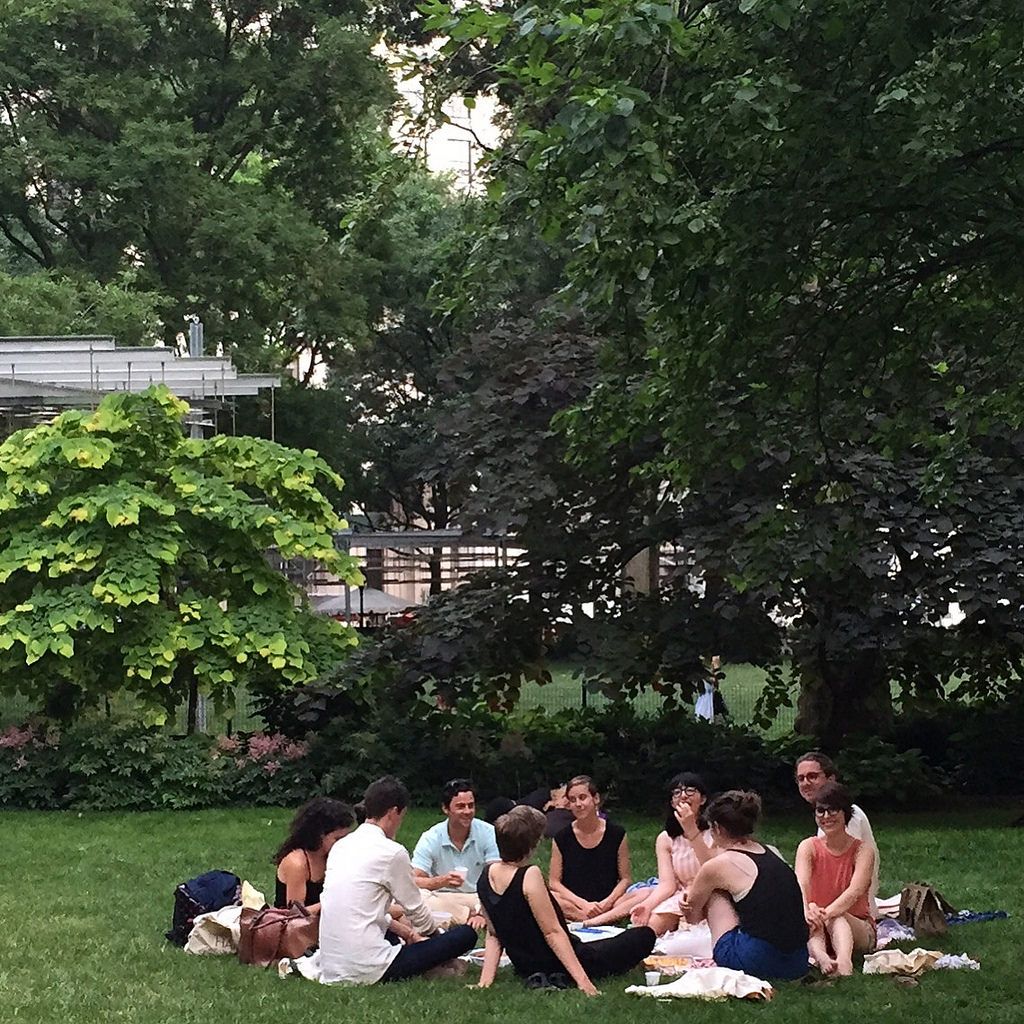 Here's a rundown of what we made: 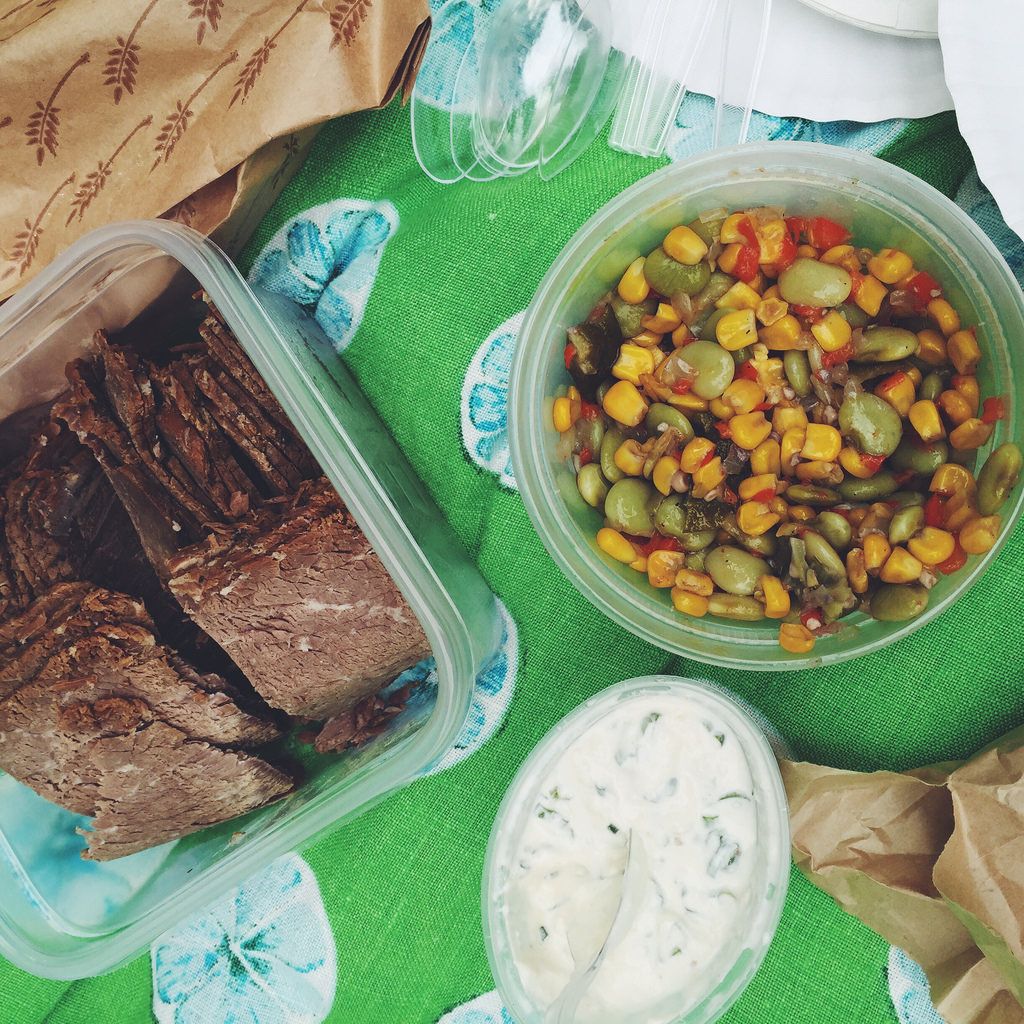 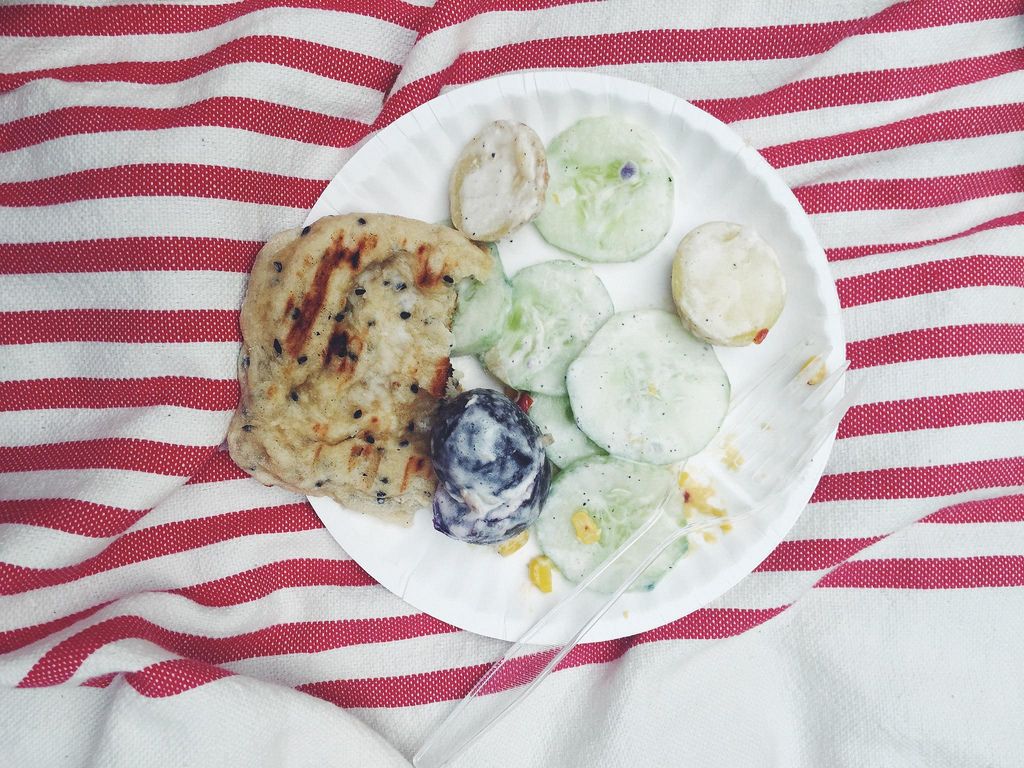 Above: Flatbread with nigella seeds and potato salad, heavy on the cucumber. 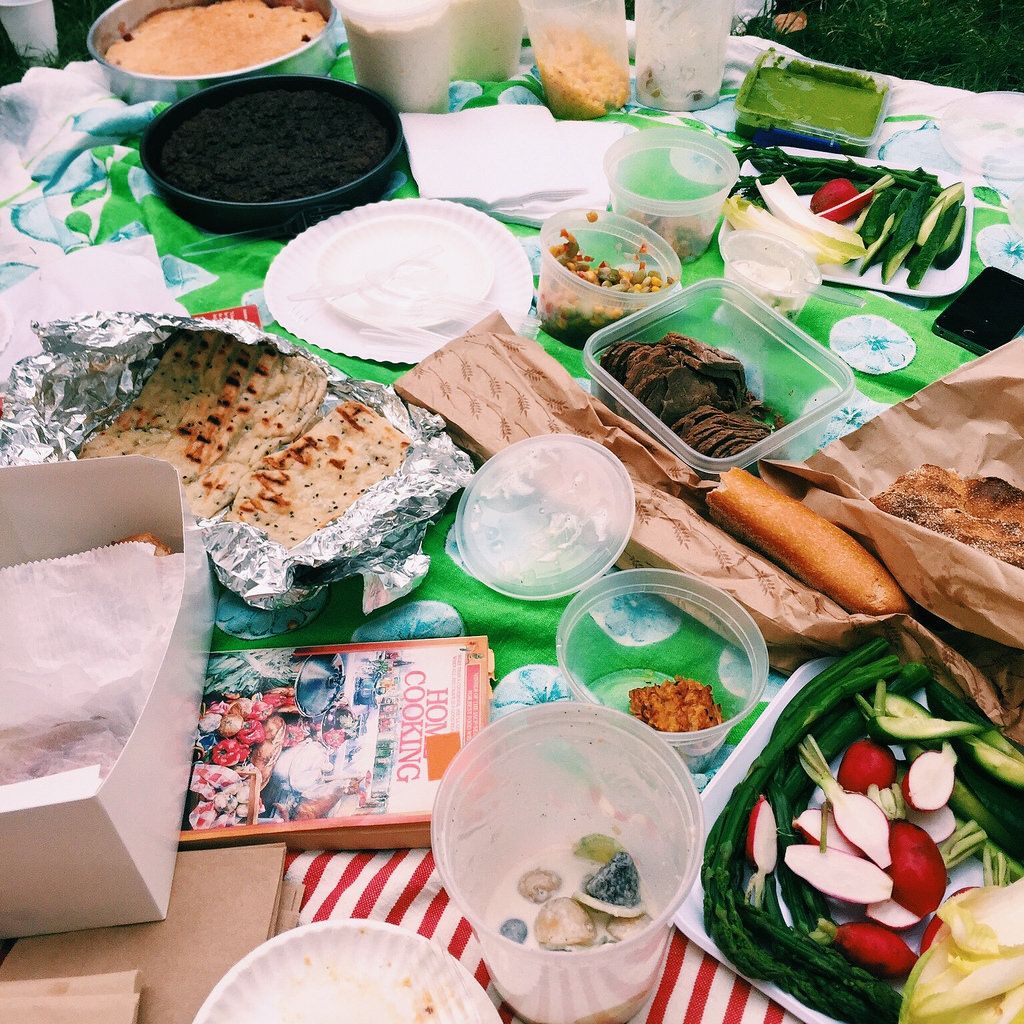 What we still want to try: 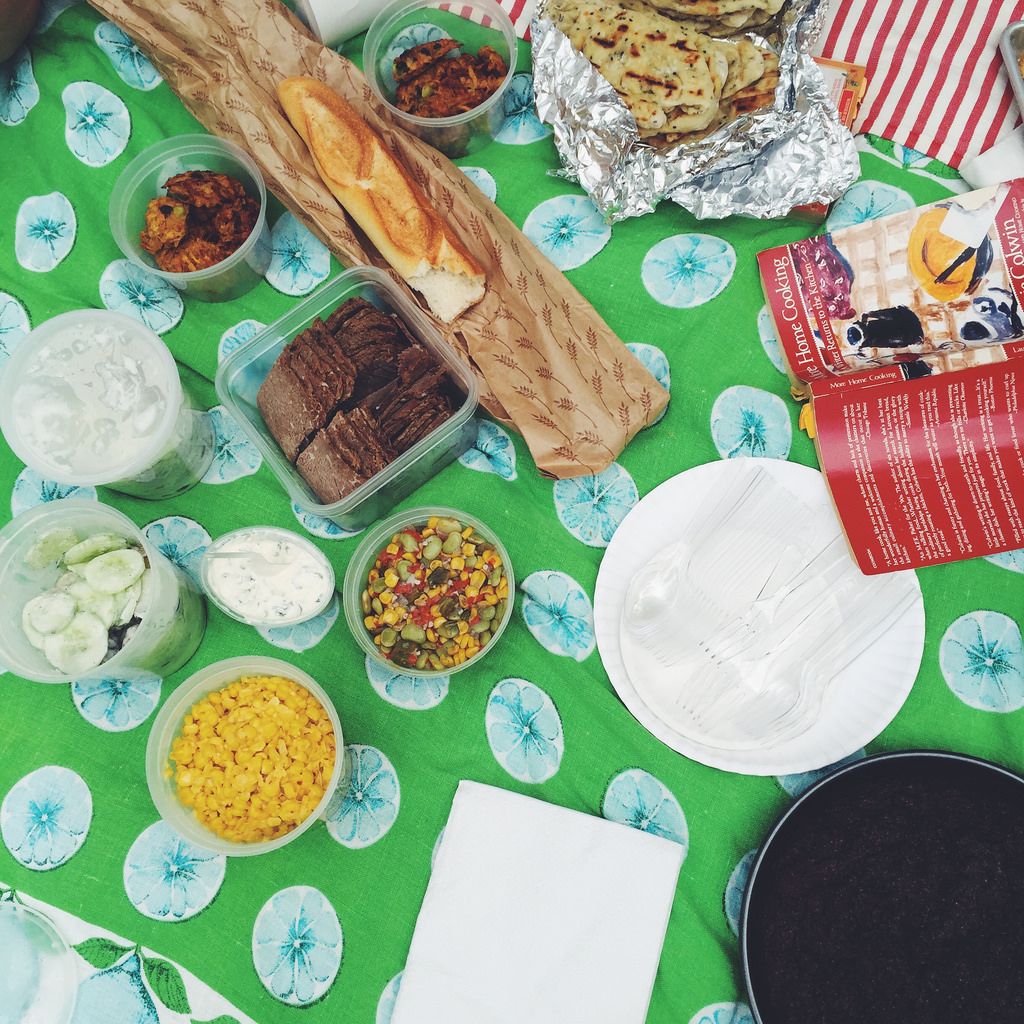 Since you had so much to say about Laurie's recipes, we want YOU to cook from her books, too. Cook from Home Cooking or More Home Cooking and share what you've made with us: Take a photo of your finished dish (or your cooking experience) and tag it with #f52cookbookclub on Instagram.

Shelley M. June 16, 2015
Beautiful spread! Tho rice pudding does seem an odd choice for a picnic.

mrslarkin June 16, 2015
This was so much fun!! I thoroughly enjoyed celebrating Laurie Colwin's life through her recipes. I wish more instagram photos would be posted, though. For me, that's the fun part, virtually sharing a meal, and seeing everyone's love of Laurie Colwin expressed in their dishes. I'm ready for our next book!

maribeth June 16, 2015
There is no better summer picnic food than Laurie Colwins Tomato Pie. The crust is the magic. She was the best

Christine June 15, 2015
Totally geeking out right now. Recently read Home Cooking and fell in love with the way she talks about cooking and her sense of humour. Clearly it's time to get More Home Cooking. And cook something from one of them.

boulangere June 15, 2015
Wouldn't it be fun to have a party with shared dishes of hers, yet also read aloud favorite passages from her books? We could even do it virtually. Is anyone in?

AntoniaJames June 15, 2015
A little something to whet your collective appetites (for literature):

- one of the first pieces of Laurie Colwin I remembering reading as a girl.

boulangere June 15, 2015
As am I going to, Bevi. There was soooooo much more to her than her food writing.

boulangere June 15, 2015
Thank you for the link, AJ; I'll look it up as well. I was crushed when she died, and still remember the day I learned the sad news. I have all of her books, and I think this summer would be a fine time to re-read them. She made writing appear effortless.

Quenta V. June 15, 2015
She was one of the first food writers I followed - although she was more than a food writer. I loved her columns in Gourmet - and was devastated when mere months after I learned of her, she passed away. I went back and searched for past columns and then discovered her books. What a wonderful tribute to her though - she'd have loved it!

Bevi June 15, 2015
I equally enjoy Colwin's novels, and I return to them again and again.

hayleycooks June 15, 2015
Why no reviews of the dishes that you cooked (aside from the spicy beef?) We can all read Colwin's descriptions of the dishes in her books but what I really wanted to know was how they turned out!

Tory N. June 16, 2015
hey hayleycooks! i wrote a blog post about the baked mutard chcicken and her biscuits on my site, if you care to check it out! apinchofthis.nyc

creamtea June 15, 2015
While I love the idea of cooking from Laurie's books, and bringing back her recipes, I am a little disturbed by the cheery tone of this post and the use of the present tense. Like many, I was very saddened by Colwin's untimely passing, and I think that needs to be acknowleged. She is very much missed to this day.

Horto June 15, 2015
I agree with you
They are probably too young to have read her cherished columns in Gourmet. I too was saddened by her passing...

creamtea June 15, 2015
I think that's it, Horto, but the cheery "thanks, Laurie" seems out-of-tune to me. I loved and anticipated her wonderful, homey articles.

AntoniaJames June 15, 2015
creamtea, thank you so much for speaking up on this point. I wept on the day I read that Laurie Colwin died, as if she'd been my sister. I felt like I knew her, so well, having first discovered her writing in the New Yorker when I was very young. Here's a beautiful multi-contributor tribute to her (long, interesting, capturing the spirit of Colwin so well) in the New Haven Review, which I highly recommend: http://newhavenreview.com/wp-content/uploads/2008/01/colwin-tribute.pdf ;o)
P.S. Her short stories are well worth whatever effort might be needed to track them down.

creamtea June 15, 2015
Thanks, AJ.. She left behind a young daughter. I love the recipes and homey tone; to her readers, she was family. Thank you for the link!

Bevi June 15, 2015
Thanks for mentioning this, AJ. I look forward to reading it. She was a heroine of mine as well.

Nozlee S. June 16, 2015
I really appreciate this perspective, but I'd like to put forward that we definitely mean no disrespect with our excitement (or our present tense). I think all of us at the picnic were children when Laurie (very sadly) passed away (too early) -- it's a testament to the power of her excellent writing (both her food writing and her fiction, all of which I've read!) that a new generation of writers has latched on to it.

creamtea June 16, 2015
Thank you for your sensitive response, Nozlee; it is almost incredible to think that so much time has passed so quickly. I was married that year; now my kids are young adults. It really does "seem like yesterday."

Savour June 17, 2015
I think her short stories are still all in print. And yes, they are jewels. The Lone Pilgrim is my favorite collection. (And her novels are wonderful, too!)