Today: Sophie Thompson of What to Cook introduces us to a wartime biscuit with timeless appeal. 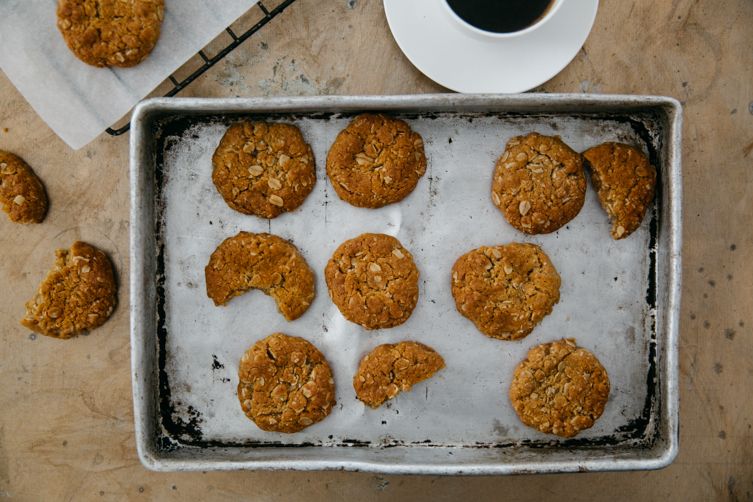 ANZAC is short for the "Australian and New Zealand Army Corps" who fought in World War I, particularly those who landed at Gallipoli, where a battle against the then-Ottoman Empire took place on April 25, 1915. Anzac Day was inaugurated one year later to commemorate the first anniversary of the landing of the Anzac troops at Gallipoli. Today, the soldiers are memorialized through the ubiquitous Anzac biscuit.

Anzac Biscuits originated from the wives, mothers, and girlfriends who were concerned about the nutritional value of the food supplied to their men in Gallipoli. Because the ships took so long to get from Australia and New Zealand all the way over to Turkey, most of the food they shipped would go rancid on-board. So women at home came up with a solution using the spoil-proof ingredients that were readily available to them: oats, sugar, flour, coconut, butter, golden syrup or treacle, baking soda, and water. 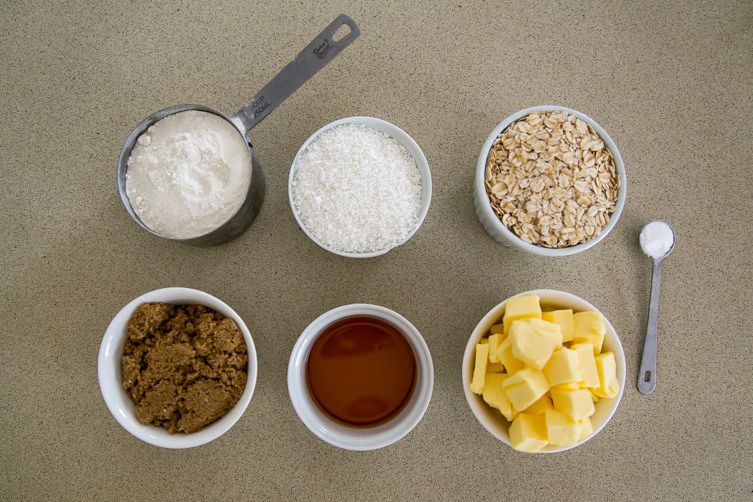 One-hundred years later, Anzac biscuits are still sold at supermarkets and bakeries all throughout the year in Australia and New Zealand. Store-bought versions, however, having nothing on homemade biscuits, which are so easy to make. Traditionally, Anzac biscuits are very crunchy, but I prefer the chewy version so I shortened the baking time to just 9 to 11 minutes. If you want to make the crunchy version, just bake them for approximately 15 minutes. Enjoy! 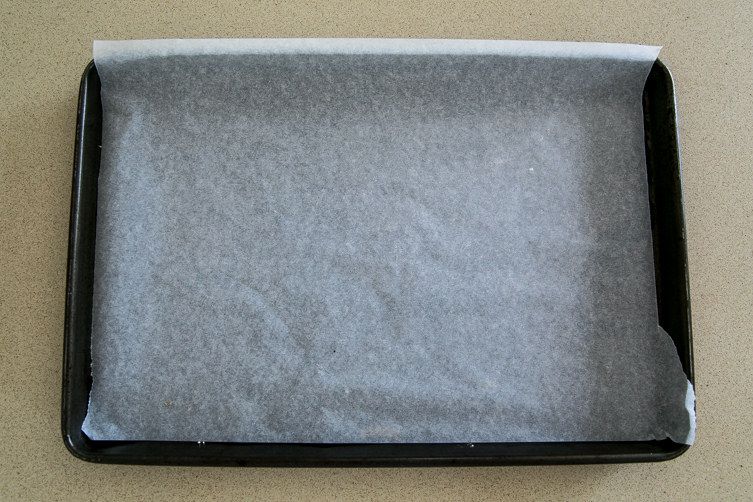 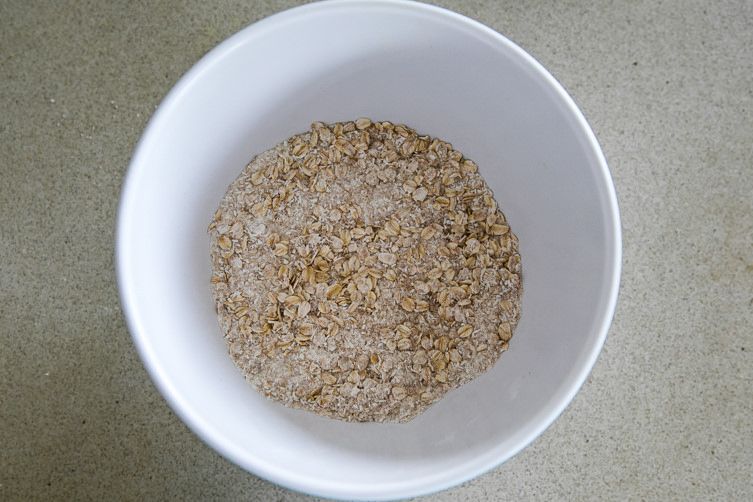 In a large bowl, combine the rolled oats, flour, sugar, and coconut. Set aside. 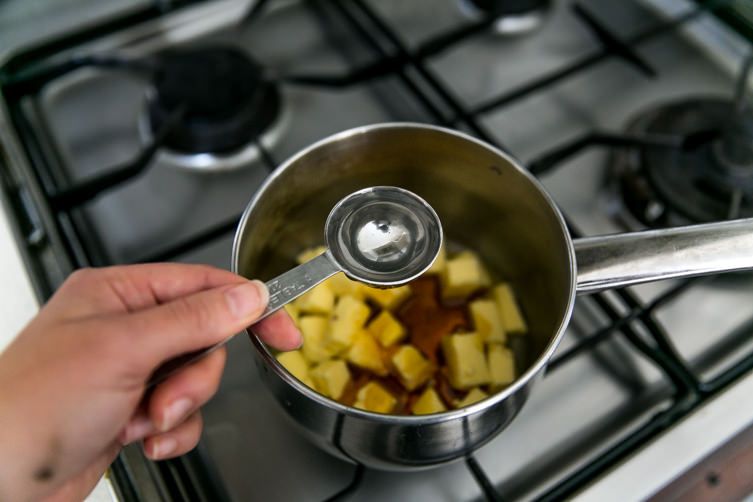 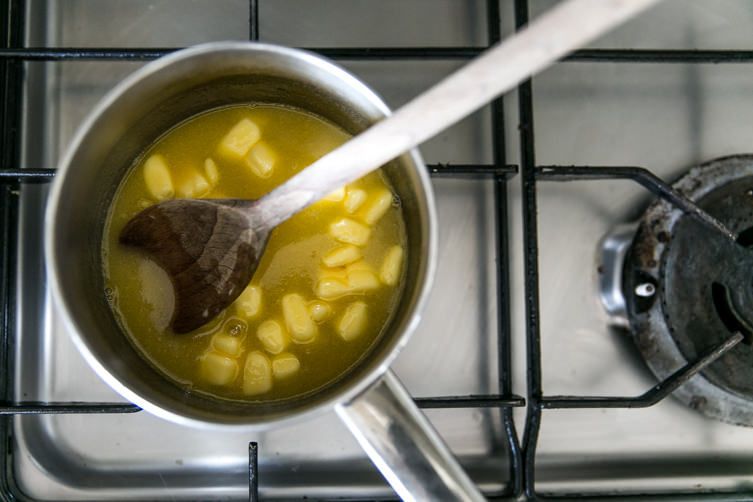 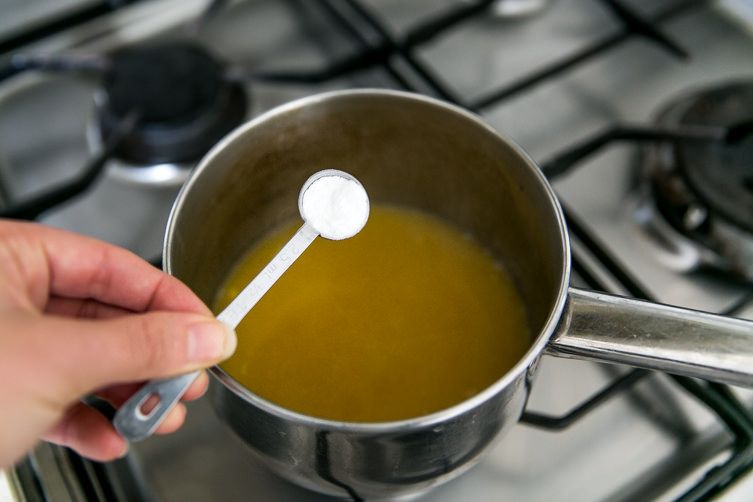 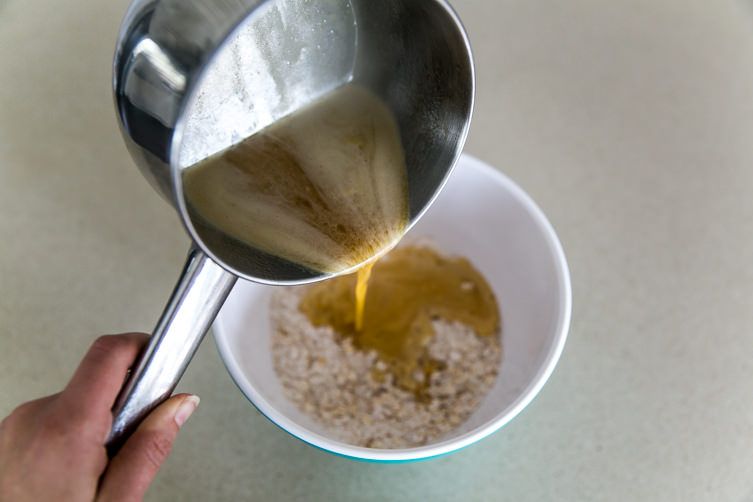 Place the butter, syrup, and cold water in a saucepan over medium heat. Stir it for 2 to 3 minutes, or until the butter has melted, and then add the baking soda and mix into well combined. 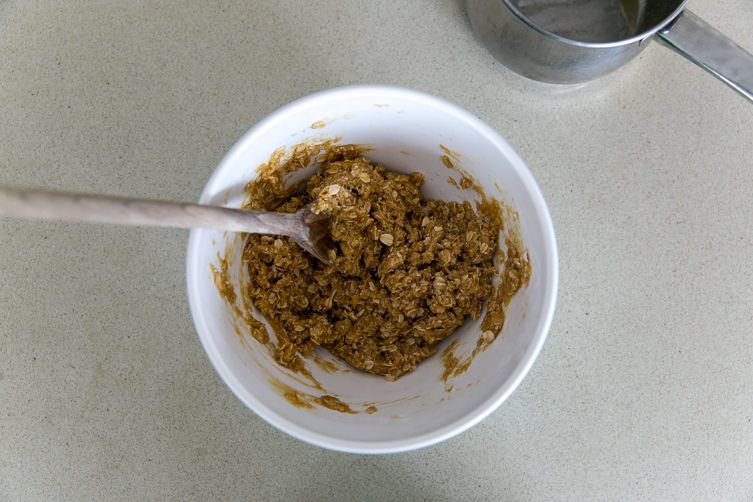 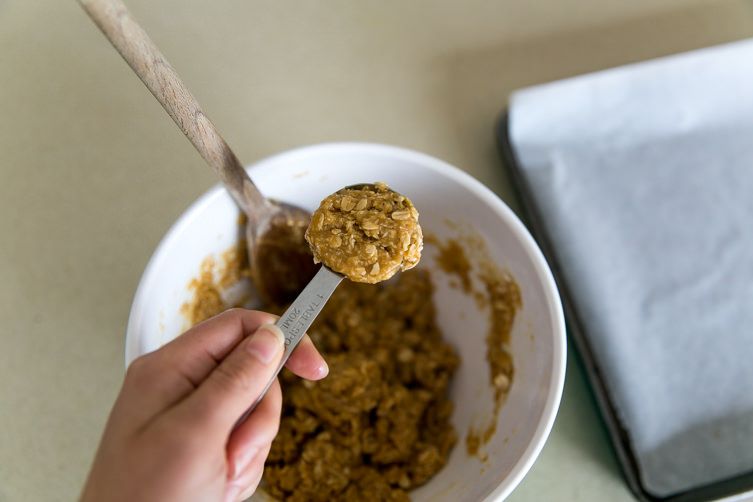 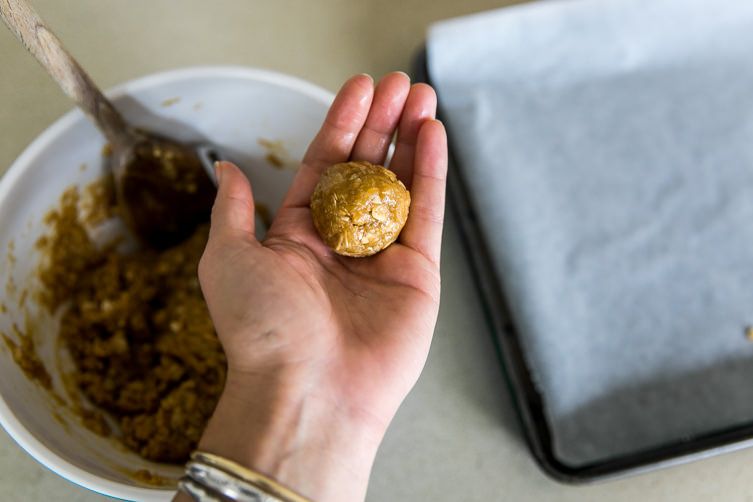 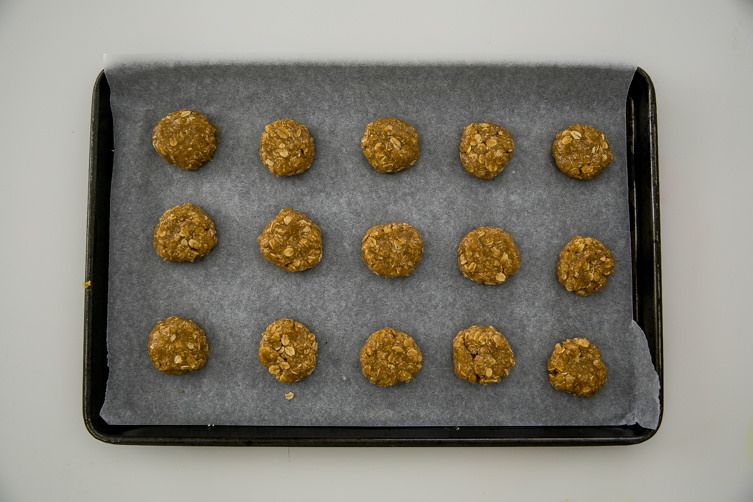 Add the butter and syrup mixture to the oat mixture and combine well. Fill a tablespoon with cookie dough, level it off, and then form the scoops into balls. Place them onto the prepared baking sheet approximately 2 inches apart, using the back of a spoon to flatten each slightly. 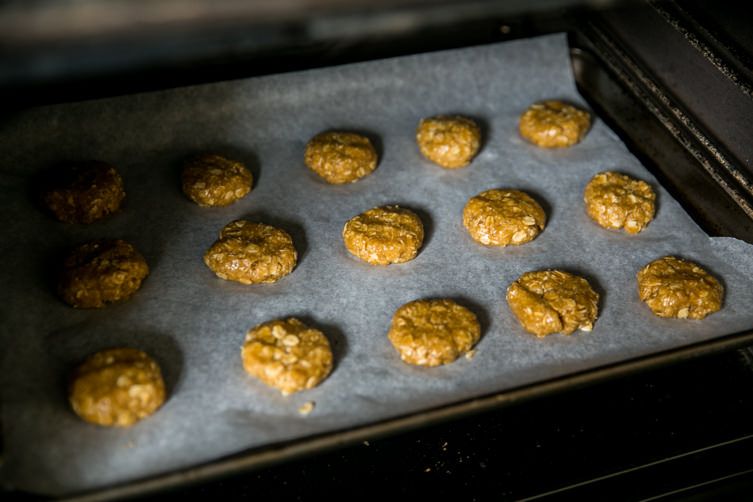 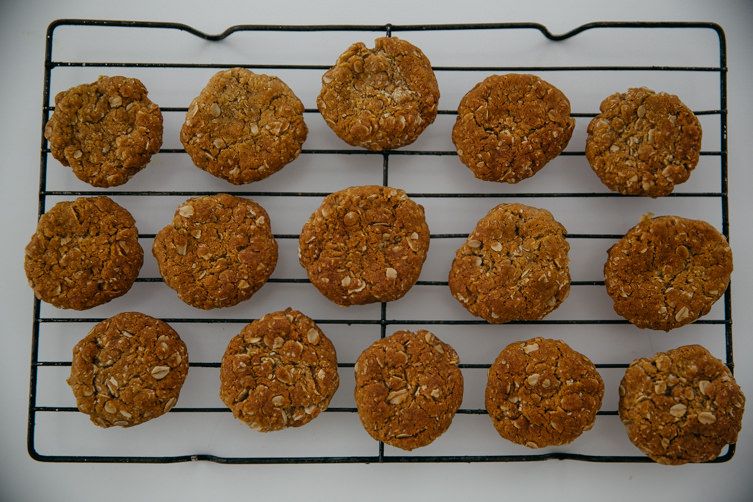 Place the pan on a low rack of your oven and bake for 9 to 11 minutes, or until lightly golden. (If you prefer the traditional crunchier biscuit, bake them for 14 to 15 minutes.) Remove them from the oven and transfer the biscuits to a wire rack. Let them stand for 5 minutes to cool completely, then serve. 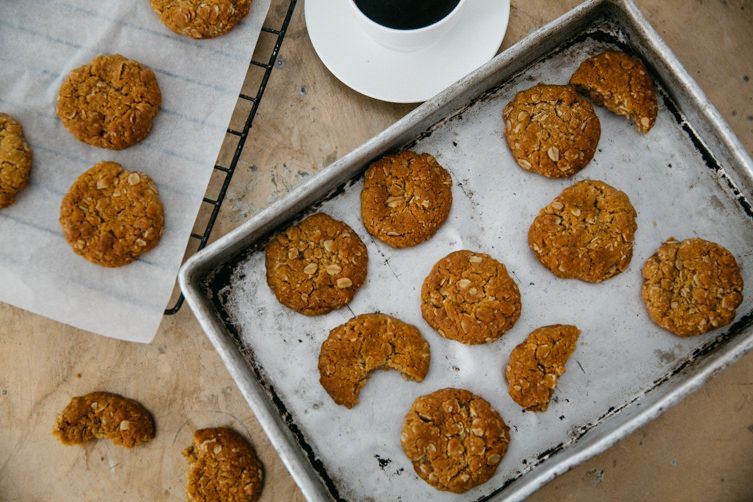 Are you a chewy or crispy fan? Tell us in the comments below!

Written by: What To Cook

chris August 14, 2015
I like golden syrup, and it's easy to find, but I don't need a pantry shelf of all-things-sugar. The recipe only calls for 2 tablespoons, so I'm going to use maple syrup. I'll 'fess up later, if it's an epic fail.

msgruvn July 2, 2015
Oh my gosh, I've read of these before but never have tried them. What do you think would happen if I subbed honey for the Lyle's?

Kat June 25, 2015
Oooo, marching into hot water here, us Aussies/ Kiwis know good Anzacs like the back of our hands! Having said that, these sound and look excellent. The true debate lies in whether your prefer chewy or crispy?

*Diane Bellora, look for a green tin of Lyle's Golden Syrup, a British product that is often found in continental delis/ aisles

Penelope June 25, 2015
Treacle is a good substitute for Golden Syrup.
One of my children liked the chewy version and the,others liked them hard, so I had to make a double batch!

LobsterBrieAvocadoBreath June 24, 2015
Diane Bellora it looks like World Market carries it. You can google substitutes pretty easily. If possible, I prefer to follow recipes to a "T" though, particularly the first time making them. Whole Foods may carry it also. Lyle's Golden Syrup. Fun to learn of a new ingredient like this.

Megan F. June 24, 2015
One of my Grandmothers made them crunchy and the other chewy. I always preferred the chewy versions. I make them for my kids somewhere in between!

Jen June 24, 2015
my local grocery store has a British food section which carries golden syrup. You probably don't have to substitute, you just need to find it in your local grocer and look in the international isle if you don't see it in baking.
If you really want to substitute, combine light corn syrup and molasses in a 2 to 1 ratio

hardlikearmour June 23, 2015
I love Anzac biscuits! Thanks for sharing your recipe.