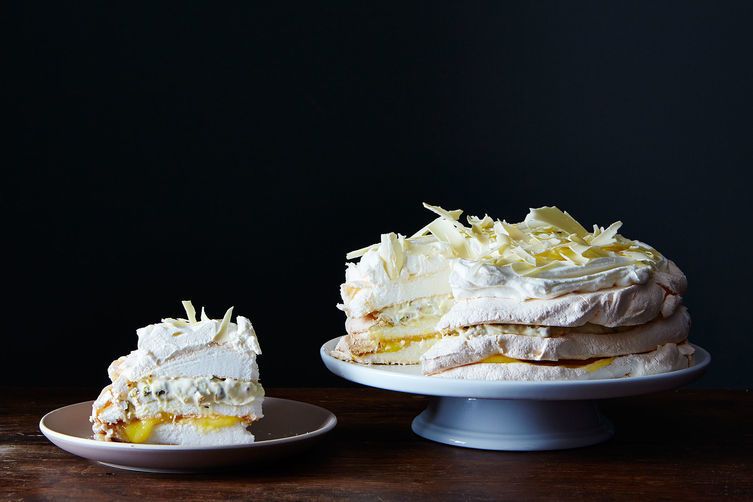 I wish I could say that we weren’t dubious, but we really were, even after the success of our first aquafaba (bean water) experiment last week. We jumped in feet first with aquafaba meringues, and found, to our surprise, that yes, it really is possible to whip up the water from a can of chickpeas into stiff peaks—and that they really did bake up into meringues. They even tasted like meringues. We were hooked: What else could we make with aquafaba?

You gave us lots of ideas to run with, and we decided to test out aquafaba chocolate mousse, mayonnaise, and marshmallow fluff. On the way into the office yesterday, I bought (in my enthusiasm) six cans of chickpeas and set to work. 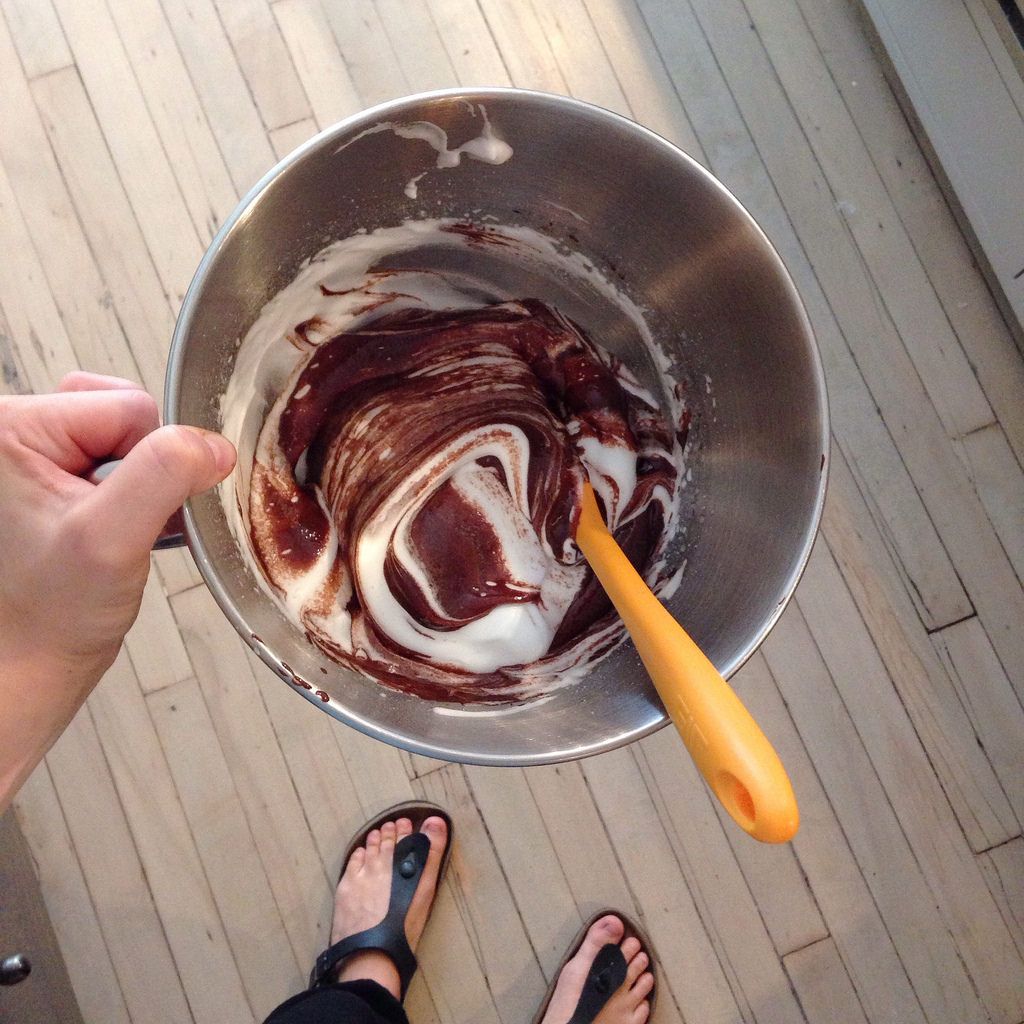 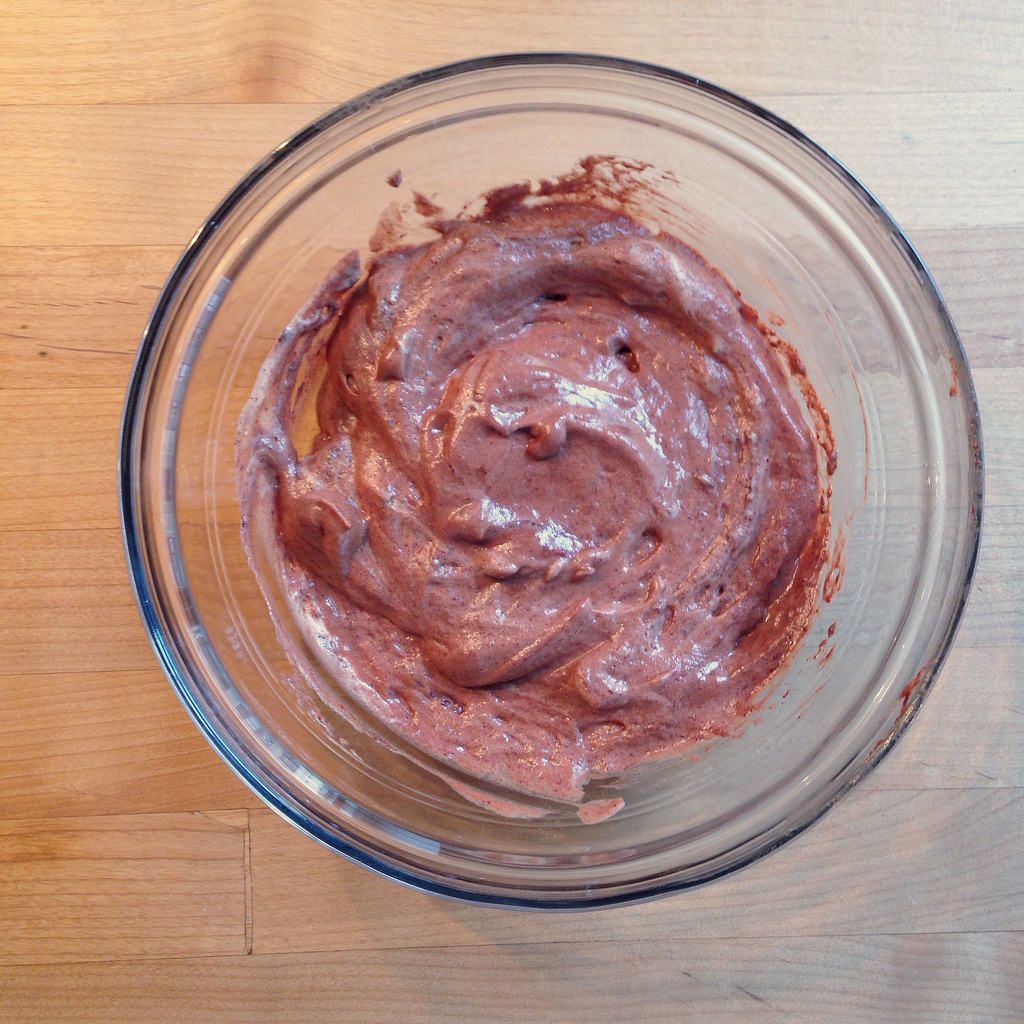 First, I made Catalinalacruz's recipe for aquafaba chocolate mousse: 1/3 cup of aquafaba (catalinalacruz used white beans, but we used chickpeas) whipped to stiff peaks in a stand mixer, 1/4 cup of sugar, 1/2 teaspoon of vanilla, and 1/2 cup of cooled, melted chocolate (I used one bar of Scharffen Berger dark chocolate, which, for the record, is vegan). I was afraid I might be folding out all of the air when I added the chocolate, but the mousse stood its ground. After it had a spell in the fridge to cool down and firm up, we tremulously lowered our spoons into the bowl. It was pretty good—a little sharp (maybe too much chocolate? Or perhaps the right amount of chocolate, but lacking in mellowing agents due to the lack of fatty whipping cream?) and the texture was very light, though a bit grainy. BUT: Not bad. Definitely not bad. Would eat it again.

We used Simmer to capture the aquafaba aioli magic.

While the mousse chilled, Kenzi (whose love for mayonnaise is undying) and I made vegan aquafaba mayonnaise. We used the same ingredients you might use in any old egg-based mayonnaise, deviating only to replace the egg with 3 tablespoons of bean water. Beyond that, it was just a touch each of mustard, salt, and apple cider vinegar, and about a cup of neutral oil. The method was the same, too: Whip it good, until you feel like your arm might fly off and the mixture starts to come together. (Check out the video above to see what we mean!) 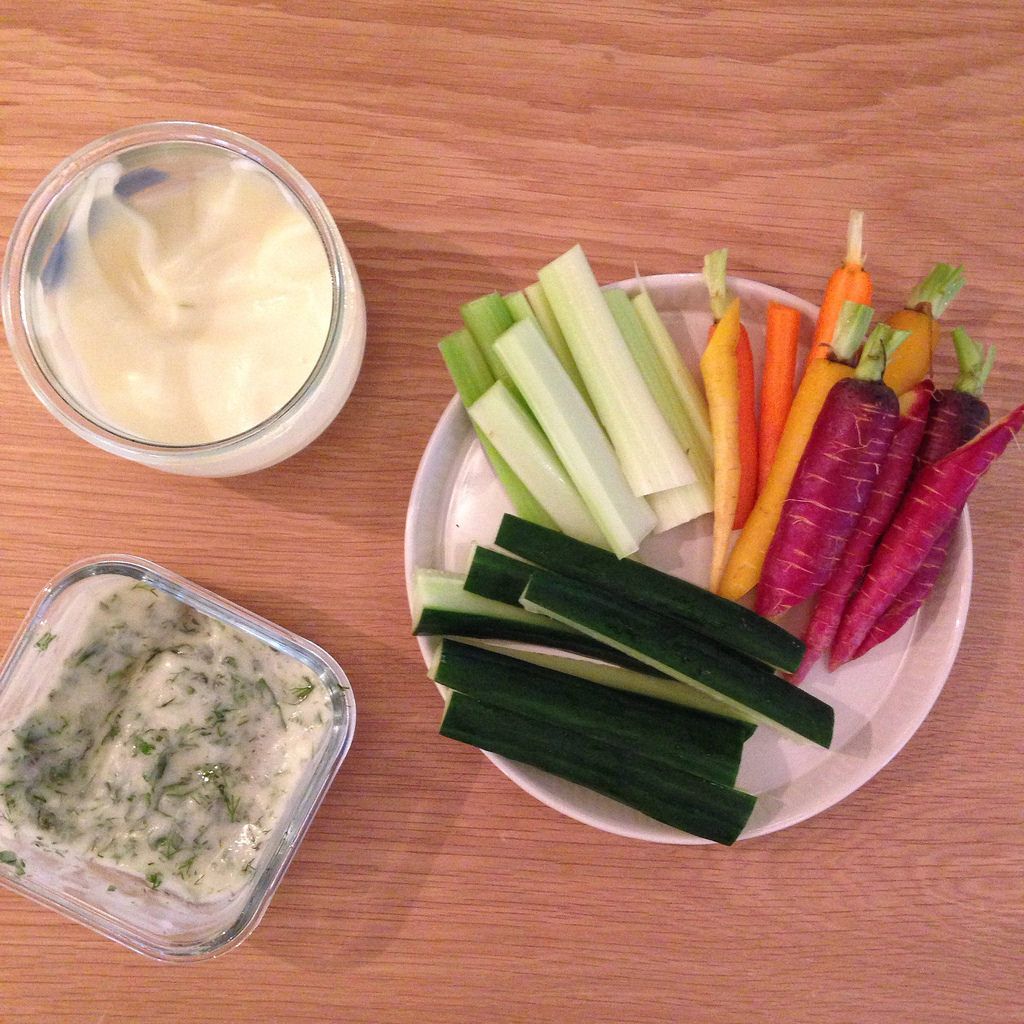 We took turns whisking and whisking and whisking and then, almost simultaneously, we gasped: It was working. The aquafaba mixture and the oil emulsified into something that was a lot like mayonnaise—looser and lighter in texture, but distinctly mayo-y. After it rested in the fridge, I divided the mayo and mixed minced garlic, parsley, and dill into half of it. We set up crudités and sat nearby to observe the Food52 team's reactions. No one seemed to suspect that it had been whipped together not from eggs but from aquafaba. Our verdict: The mayo was the best of aquafaba bunch. We'd even feed it to our friends. 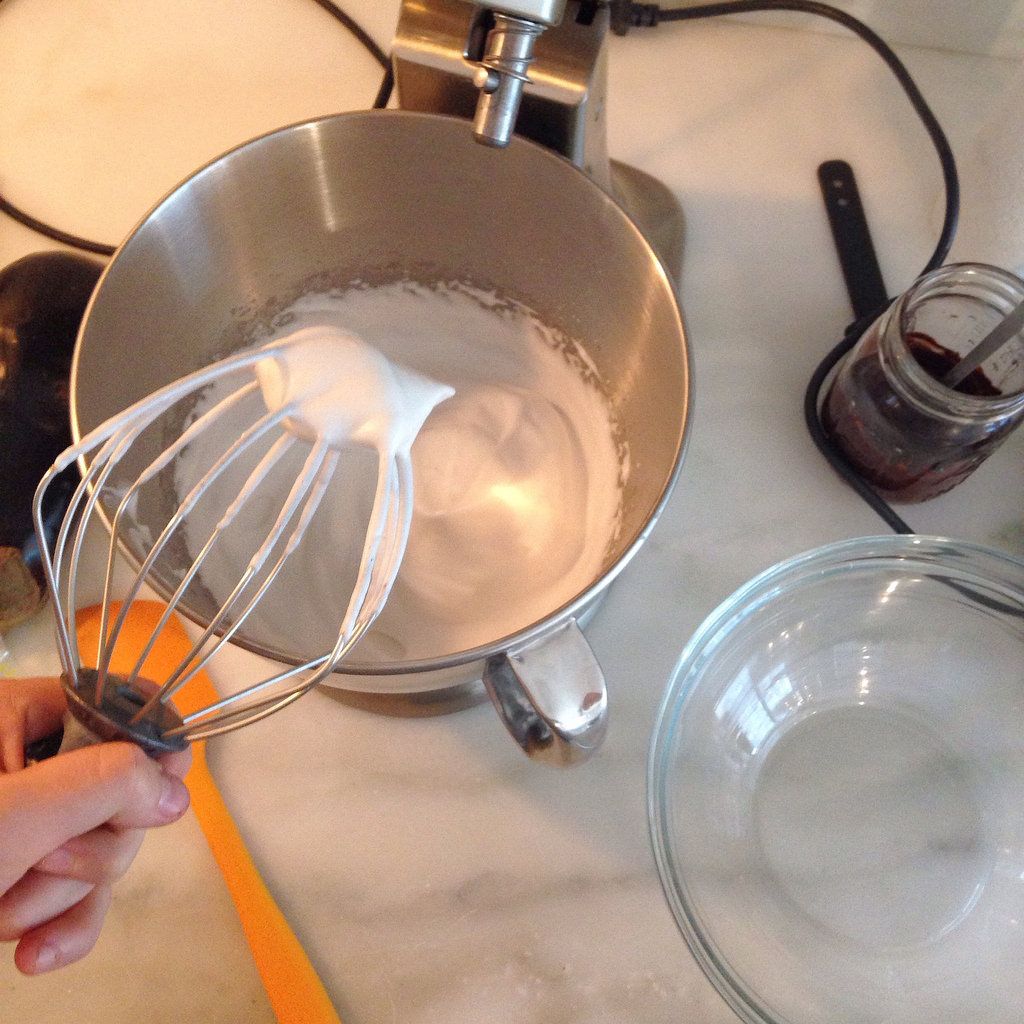 Finally, marshmallow fluff: I followed a recipe I found on Chocolate-Covered Katie. The fluff is essentially the aquafaba meringue, but unbaked: 1/2 cup of honey or sugar (I used the latter), the liquid from one can of chickpeas, and a sizeable pinch of cream of tartar. My arm still recovering from our mayonnaise experiment, I used the stand mixer this time, beating the aquafaba on high until it formed stiff peaks. When peaks began to form, I added the sugar and the cream of tartar. It was glossy and bright and full when I scooped it from the bowl; the cream of tartar added significant stability to the fluff, eliminating some of the fragility I encountered when I was folding the chocolate into the whipped aquafaba for mousse. We sampled the fluff alongside the mousse—and it received poor reviews. It tasted pretty beany, far beanier than either the mayonnaise or the mousse, neither of which had any bean flavor at all. I'd save this to make meringues with. Maybe.

More: Experimenting with aquafaba? Here's what to do with all of the leftover beans.

Are we ready to give up eggs, to sub in bean water in all our future baking endeavors? Not quite. (Admittedly, we’re both purists and huge egg fans—the first thing I thought to do with our aquafaba mayo was to make egg salad with it. Oops.) But if you’re experimenting, or have an egg allergy, or have a spare can of chickpeas lying around, it’s worth a shot—especially the mayonnaise. Seeing that aquafaba whip up really is a kind of magic.

What have you made with aquafaba? Have you used beans besides chickpeas? What recipes would you like to try? Tell us in the comments!

beth October 19, 2017
I read that if you use bean water from chickpeas with no added salt that there's not so much of a bean flavor. Might be worth a shot with the meringue!

monica March 13, 2017
I did the marshmallow fluff from Chocolate Covered Katie too, and added rose water and vanilla to mask the beany flavour. Turned out pretty good. Put in the freezer and will serve it as a topping for mousse rather than marshmallow fluff.

Ania M. April 22, 2016
It sounds like chocolate in your chocolate mousse seized hence the graininess, it happened to me a few times before I realised what I was doing wrong. Aquafaba really is miraculous, I've used it to a great effect in meringues, mayo, cookies, cakes, tempura. Now I'm experimenting with pavlova :) and I'm pretty confident it will work eventually.

Lynn D. January 10, 2016
Have you every made (regular) mayonnaise with a stick blender? I wonder how it would work with aquafaba mayonnaise?

AntoniaJames June 26, 2015
Somehow, using disodium EDTA as a primary ingredient in any of these recipes (or any other for that matter) just does not appeal to me. I understand from the other thread that one can also use the cooking water from dried chick peas. I'd be interested in seeing a Food52 test taking that approach instead. ;o)

Caroline L. June 26, 2015
we'd like to give it a try, too! (we went with the canned stuff for speed while recipe testing.) if you experiment with the cooking water from dried chickpeas, let us know how it goes! some of the commenters on our first post, about aquafaba meringues, suggested that it did work.

Panfusine June 25, 2015
I used aquafaba in place of the egg in Emiko Davies's recipe for Maritozzi. Worked like a CHARM!
http://www.panfusine.com/2015/06/the-we-knead-to-bake-project-28.html

Elizabeth S. June 24, 2015
This aquafaba madness is so intriguing! I'm allergic to chickpeas, but I can have pinto beans. Next time I'm making canned beans for dinner, I'm going to whip some up and see what happens.

Caroline L. June 24, 2015
please let us know how it goes! i'm so curious about what other varieties of bean juice are capable of.

Ali S. June 24, 2015
Caroline had the great idea of trying black bean liquid in something chocolatey. I'm so intrigued!

Laura M. June 24, 2015
My first attempt at aquafaba was a disaster! It took SO long to get the bean water to whip up (for just a simple meringue) and then when took it out of the oven it was completely flattened and stuck to the parchment. Too much sugar? Not enough whipping? Do I need to whip it on the highest setting from the start? I was really looking forward to feeding meringue cookies to my husband and then springing it on him that it was made from bean juice...

Caroline L. June 24, 2015
oh no! i'm sorry to hear that your bean meringues didn't work out. if you want to try again, i had the best luck whipping a can's worth of aquafaba + a big pinch of cream of tartar + 1/2 cup sugar on the highest setting for about 13 minutes. the cream of tartar definitely helped stabilize the "meringue."