Meet Brad Sherman, Designer of our New Furniture Line (and the Food52 Office)

The designer of our new (and previous) offices, Brad Sherman just launched a custom collection of furniture through our Shop. Here's how he does it all. 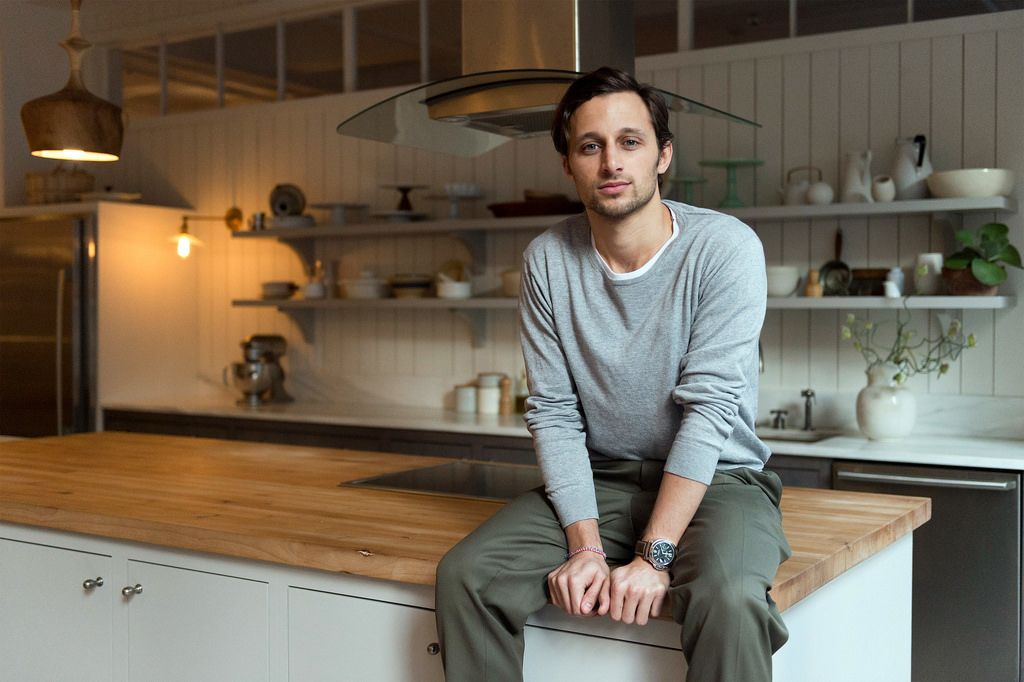 Brad's glamour shot for his recent New York Times feature was set in our office.

Brad Sherman got his start designing offices out of trash. Fresh out of a master’s program in sustainable design at Philadelphia University College of Architecture, he accepted a job at TerraCycle, a start-up waste solutions company in Trenton, New Jersey that allotted him one dollar per square foot to design their 20,000 square foot headquarters.

Other designers might have balked at the TerraCycle offer (a $20,000 budget seems like a lot until it’s all you have to tackle a half-acre of office space), but with a passion that can only be described as dogged, Brad took on the job. He hung sheets of plastic bottles as room dividers, set tabletops on stacks of plastic buckets, and used records as cube walls, old wooden boxes as shelving, and a giant knot of camera film as a chandelier. 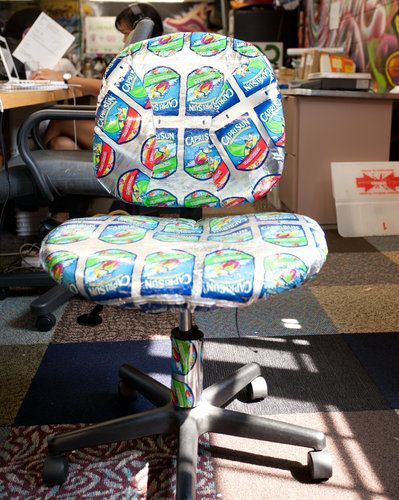 TerraCycle's HQ, which Brad designed using a range of inexpensive and recycled materials.

“I had a passion for sustainability, and I got to do both product and interior design for them so it was a pretty perfect job,” he remembers, as we chat across the conference room at the NYC mattress start-up Casper, where I’ve cornered him between projects. Brad is in the throes of designing Casper's newest Manhattan office a few blocks away, and he, his partner Nina Etnier, and two new junior designers are all completely in the zone when I come in to pick his brain. 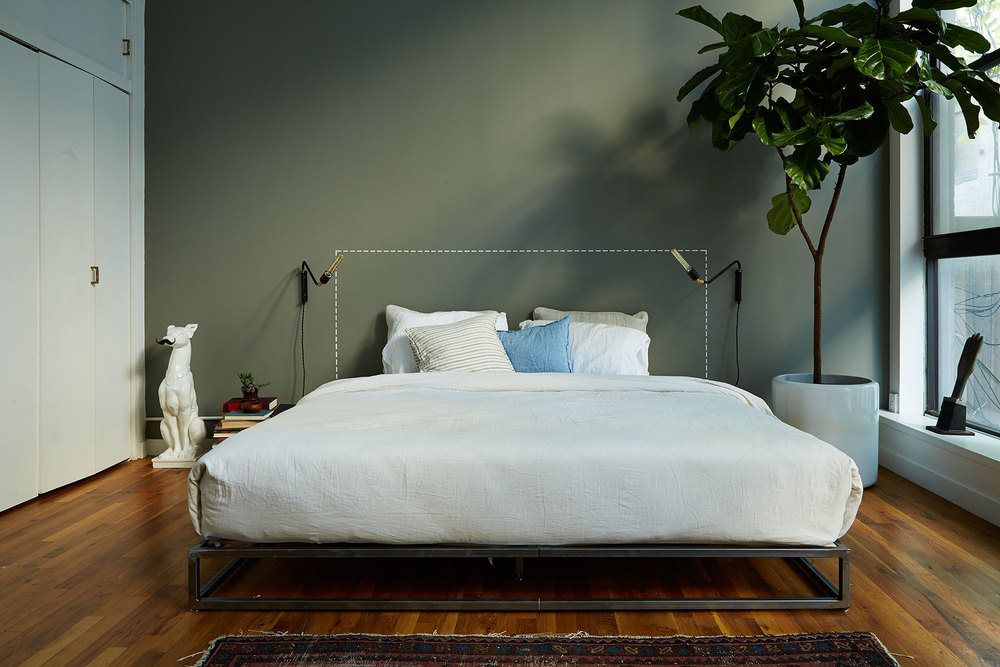 Brad's first project at Casper was to design a metal bed frame they would go on to use in advertisements. It was so popular, they had to start selling it.

The building where Casper is moving, just south of Madison Square Park, will bring back a few memories for Brad. It's where he went to work after TerraCycle, in a regular desk job at the start-up incubator General Assembly, while he figured out his next move. One of the General Assembly's tenants at the time was Food52.

As the story goes, Merrill cut her finger and asked Brad, seated at reception, for a Band-Aid. "I was at a point when I needed someone who believed in my purpose and my eye," he remembers, "so when Merrill stopped to speak with me, I didn’t let her leave until she gave me the full story." Did Food52 need a new office? A designer who worked miracles on a budget? Yes and yes. Many conversations later, Amanda and Merrill brought him on for the job. According to Brad, it was the hire that "launched my career." 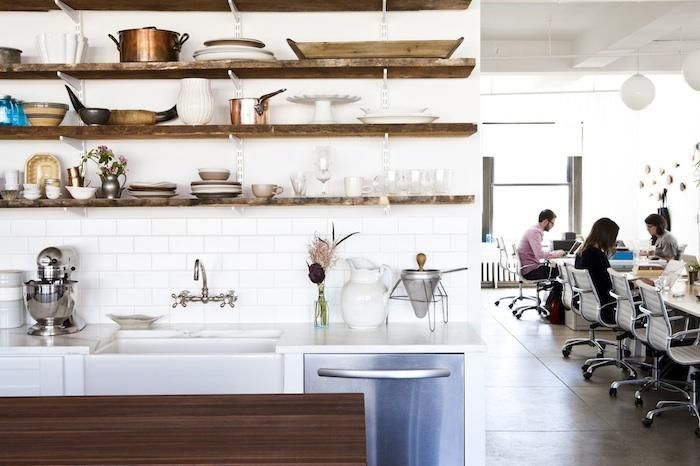 Our office at West 30th Street, designed by Brad.

Two Food52 offices, one New York Time mega-feature, and two new hires later, Brad has launched something else remarkable: a custom-designed furniture line through our Shop. The launch collection features a modern farm table with benches, an industrial-inspired bar cart, and a goes-with-anything rusted steel coffee table. Brad came up with the designs while outfitting our office and had a local fabricator build them from his sketches and notes. (Try asking your current interior designer to do that.)

"You have to serve as architect and engineer," he says of designing weight-bearing furniture. "I don't have a shop, so I can't just weld something up. We make drawings knowing the steel has to be certain diameter to hold weight, send those drawings to a fabricator, he makes reccomendations, and we compromise. I am always pushing the fabricators to go skinnier on the gauge." 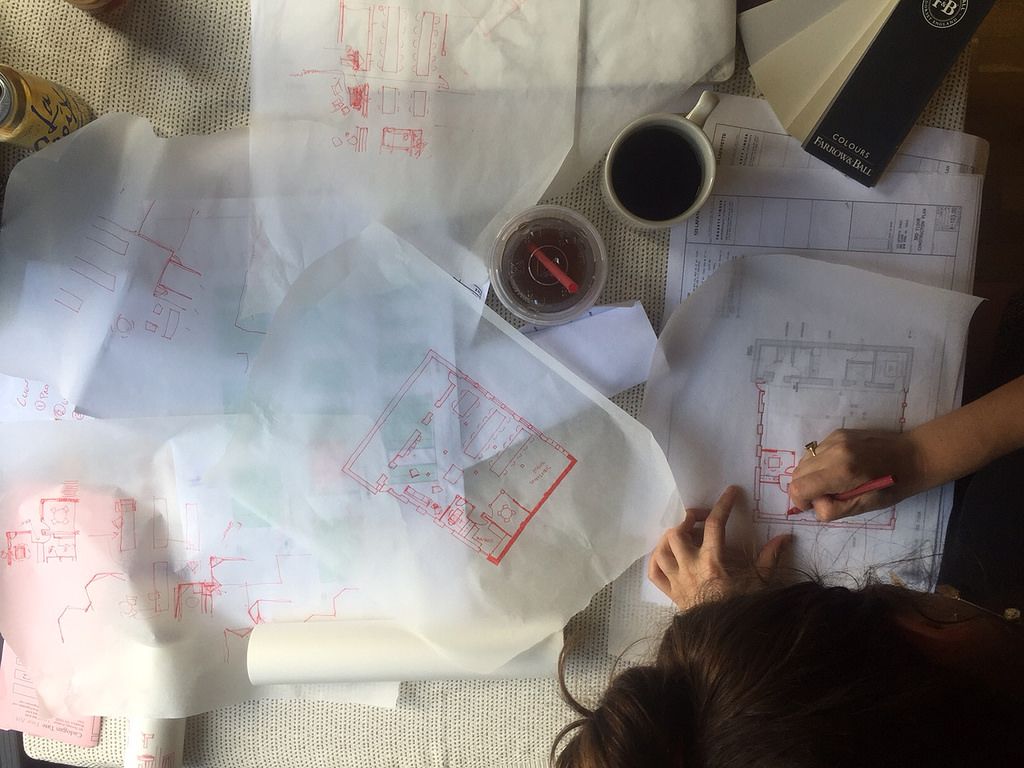 Nina Etnier, Brad's partner in design, lays out a space.

When we first moved in, Brad was in the office every day, assembling, measuring, finishing countertops, and adjusting light bulbs—anyone who knows him can tell that he deeply cares about our company. When he talks about making the Food52 farm table, a modern take on the classic design, it's like an exercise in philosophy:

“Farm tables are everywhere. Everybody wants one in their kitchen, no matter what the style, to lend a little bit of character. For Food52, I wanted to update the old-school farmhouse table but in a way that was authentic. The x-frame legs, in their shape alone, speak to the trestle construction of an antique table, and the rust patina gives character. The oak top isn’t perfect, because it’s a piece of real wood, but white oak is extremely durable and we finished it with a satin lacquer, which will protect it but eventually wear down. Over time, the wood will begin to age with natural cracks. I love that natural patina of wood and don’t think it should be manufactured, like you see some large retailers do. A table should collect your stories.” 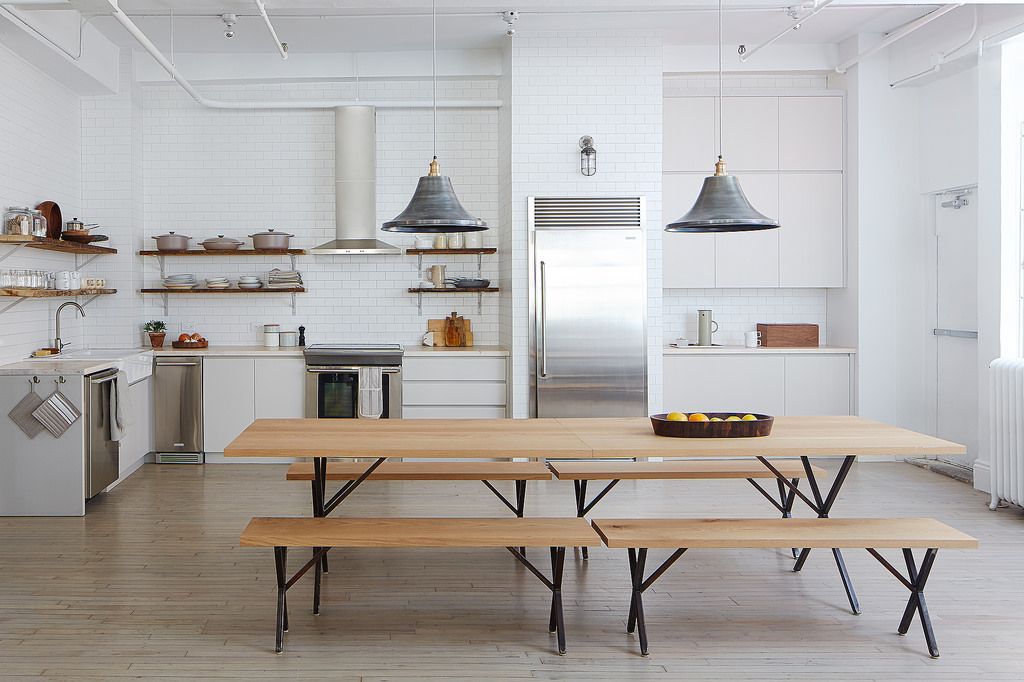 Talking a mile a minute, Brad is the kind of person who can rattle off an answer while the question is still forming in your brain; his instinct for great design, coupled with his passion for seeing it through, comes off like a force field. “I definitely always knew,” he says, when I ask if he’s always been into design. As a middle schooler growing up in West Bloomfield, a manicured community in the suburbs of Detroit, there were signs.

“There was one time that my parents went out of town for two weeks and I re-did their entire yard: retaining wall, gravel path, tumbled stone border, lined hedge path, fire pit, custom log benches….” He goes on. At an age when most kids are busy dissecting frogs and worrying about how to skip class without any trouble, Brad was starting a landscaping business. 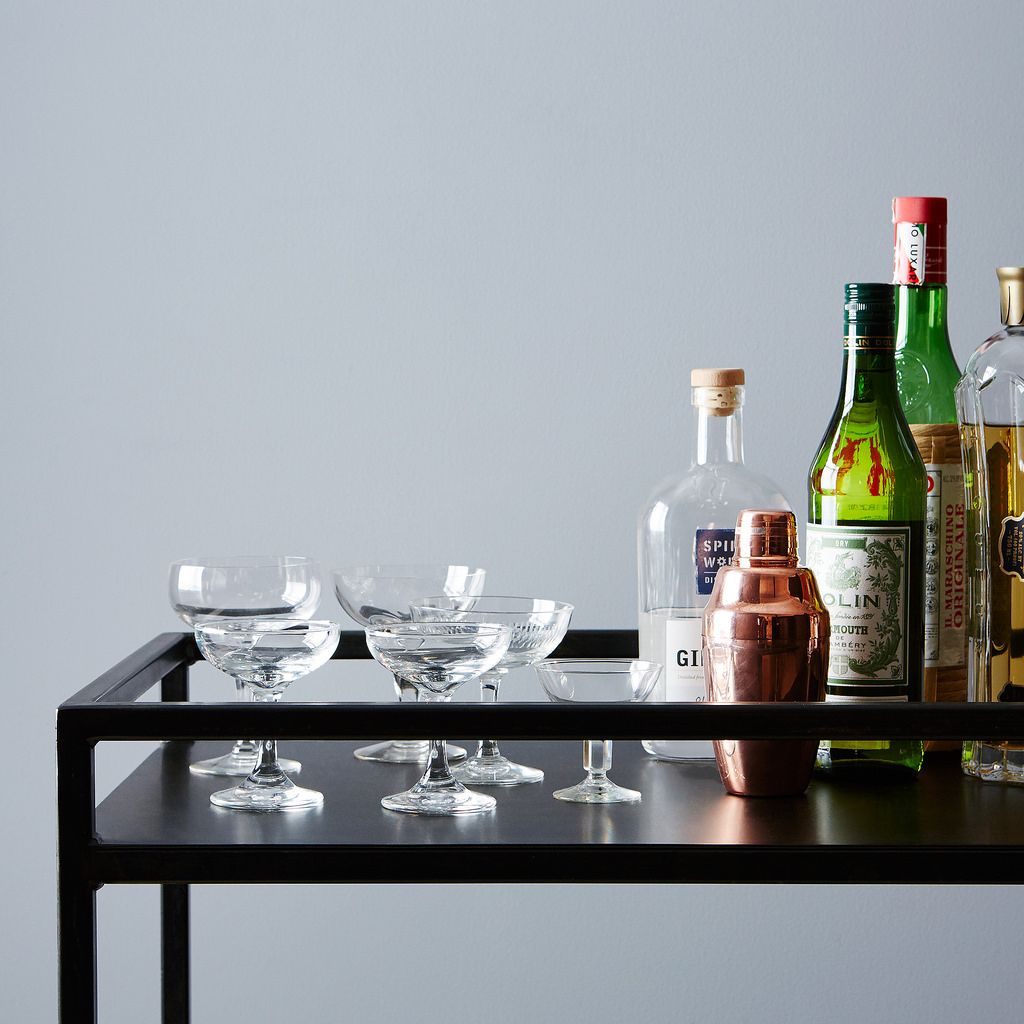 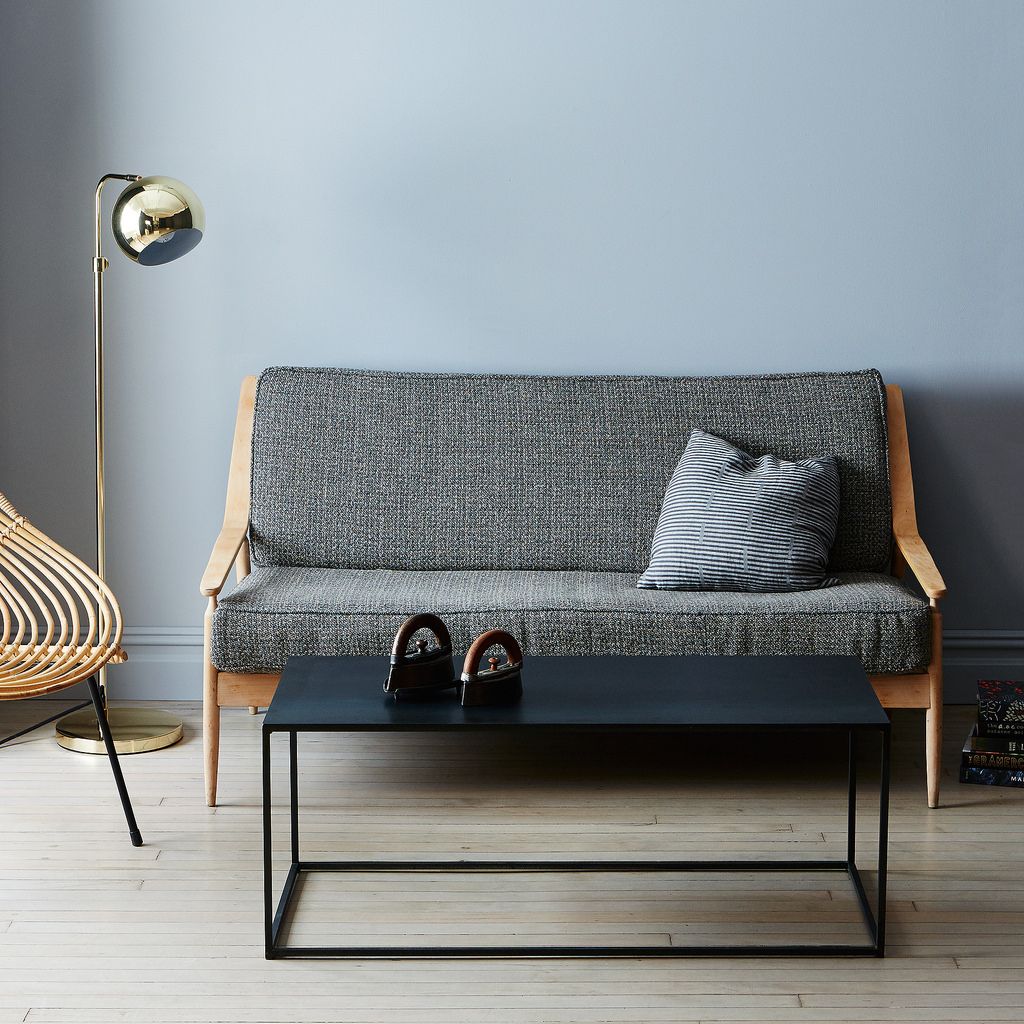 Brad's new designs for the Food52 shop are crafted out of rusted steel, prized for its durability and classic patina.

For middle and high school, Brad was enrolled as a day student at nearby Cranbrook, an esteemed preparatory school for the arts designed by the world-renowned Finnish architect Eliel Saarinen. “My sisters chose not to go because they didn’t have cheerleading,” he says, “but I wanted to.” At Cranbrook, Brad focused on studio metal-smithing (“I was in all the competitions designing furniture and fountains and bowls and jewelry”) and he speaks at length about how the campus itself, with its world-class art museum, 40 acres of gardens, and Arts & Crafts influenced buildings, has continued to be an inspiration to him throughout his career.

From Cranbrook, Brad sped through college and graduate school, the first student ever to complete his master's program in half the alotted time (one year instead of two). He is driven in that fiery, wide-eyed way of a student with a double-major and never misses an opportunity to down-play his successes. How does he juggle interior design projects with launching a furniture line? "Every decision I make comes down to common sense."

Bryn C. September 26, 2017
I love the steel bar cart but can’t find it anywhere is this something that I can order??

Lisa J. August 5, 2015
Wow, I love this story. I use Terracycle all the time so that was neat to see Brad worked there. Food52 is also my go-to source for all things food and seeing Brad's work is so inspiring! Thanks for sharing!