A Modern Glassmaker with a Lot of History: Mosser Glass Takes the Cake (Plate)

We make a lot of cakes and pies around here—and when we want to raise them up above the rest, we reach for our trusty glass cake stands. We've been stocking Mosser Glass's stands since we opened our Shop, and now their stands come in one of our favorite colors: gray! 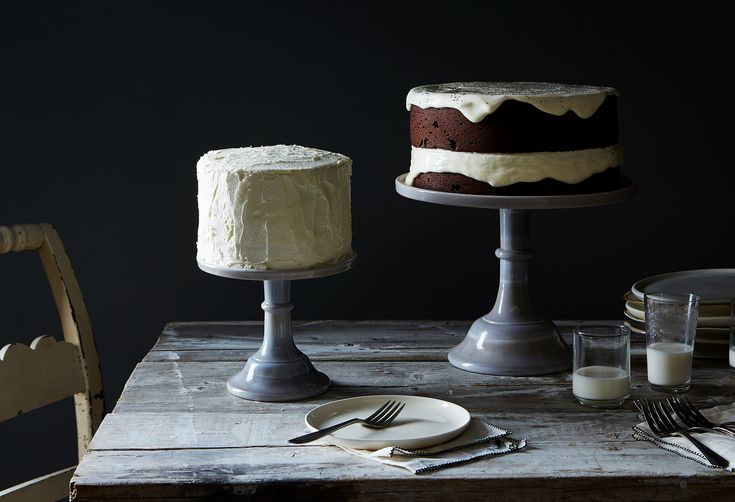 “It’s just how it comes out!” Mindy Hartley, née Mosser, told me when I called to ask her about the new color Mosser Glass is issuing for their line of cake plates: a cool gray with subtle pale marbling that makes our gray-loving hearts (have you seen our office?) beat fast. “It’s variegated, not planned. We found it by accident," she said. "We were trying to come up with a pretty gray, and once we put it out in the showroom and got some feedback, we decided to go forth with it.”

We're so glad that they did: That variegation is one of the things we love most about Mosser Glass. Discovery by way of accident is harder to come by when the products stop being handmade, and Mosser Glass is a very handmade sort of company.

Mosser Glass is a modern glass factory with a lot of history behind it. That history is visible in their vintage-inspired designs—their cake stands, bowls, servingware, and other products are made almost entirely from decades-old molds sourced from auctions or going-out-of-business manufacturers—but it’s also present in the company’s very foundation. 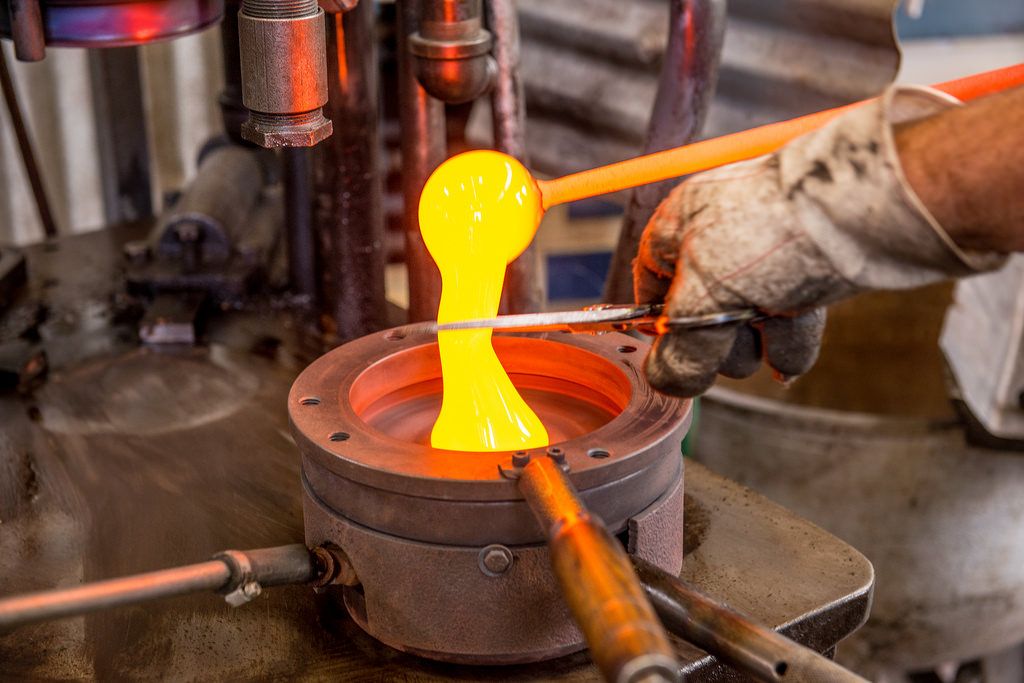 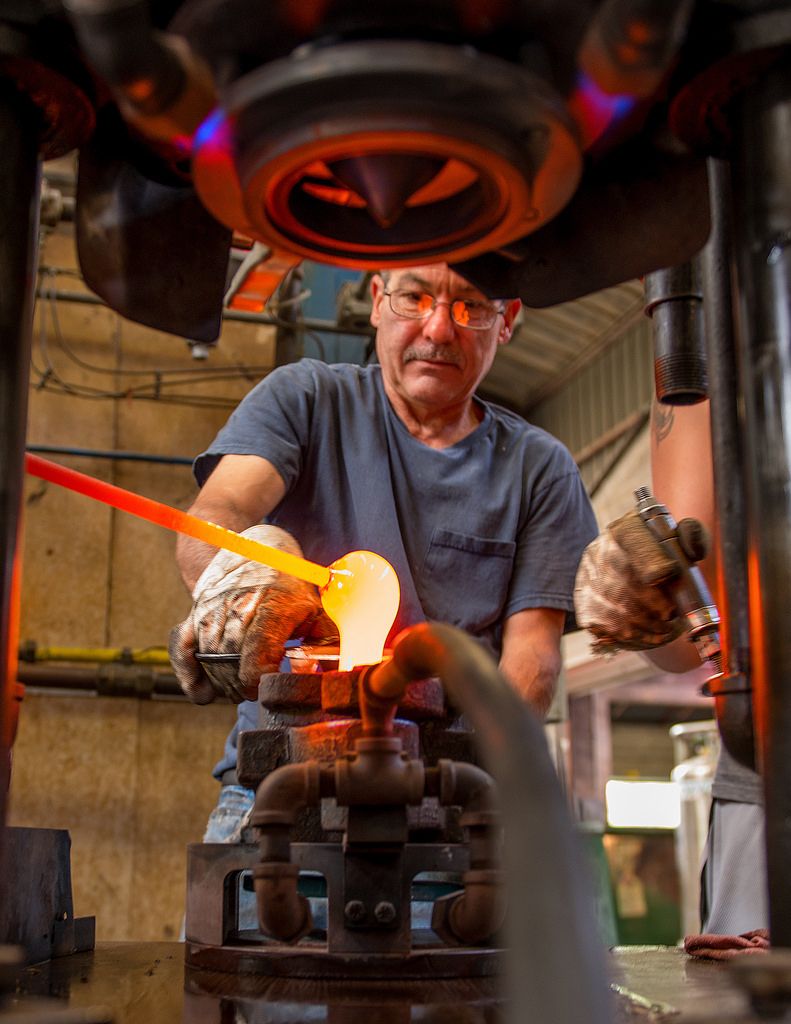 Pouring and shaping molten glass at the Mosser plant.

Thomas Mosser, who founded Mosser Glass in 1971, opened his Cambridge, Ohio, factory when the glass company he worked at previously (and where his father, Orie Mosser, had been the plant manager) closed its doors. Now, 40 years later, three of Thomas’s four children run the factory he founded: Tim, following in his father’s and grandfather’s footsteps, heads up the manufacturing team, while Sally and Mindy man the shop, handle the company’s sales and marketing, and help develop new designs. “It’s fun to come up with new items," said Mindy, "and then fun to try to get my brother to make them."

Needless to say, a love of good glass—and a real skill for making it—runs in the family. 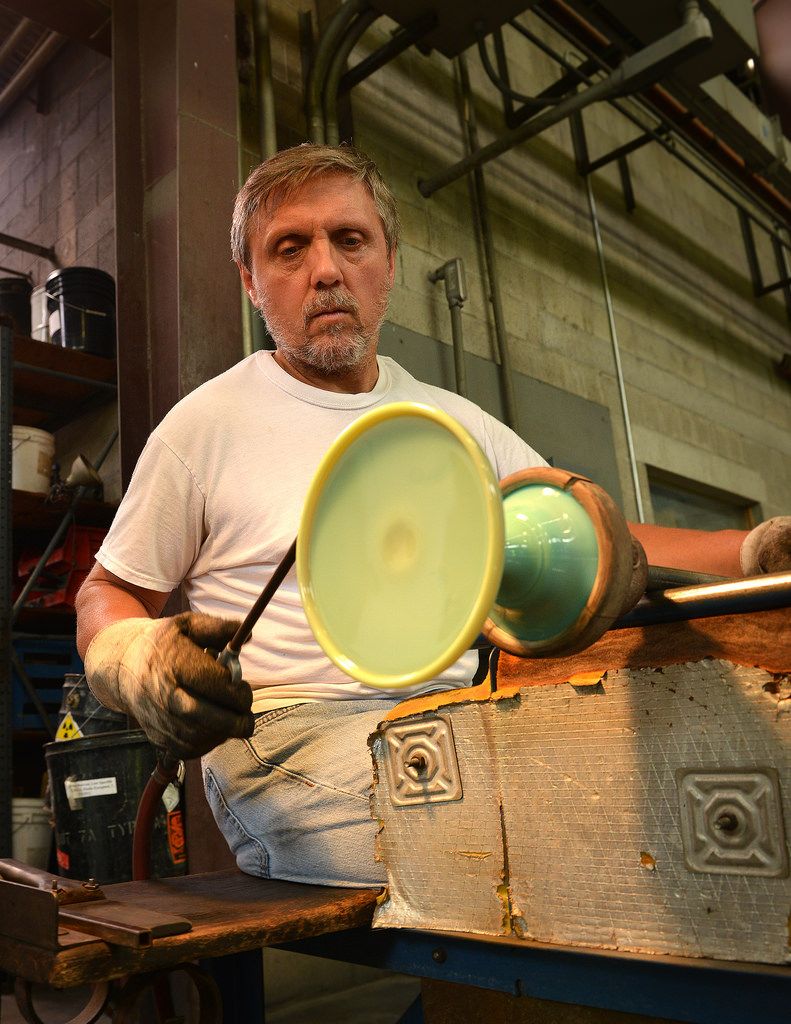 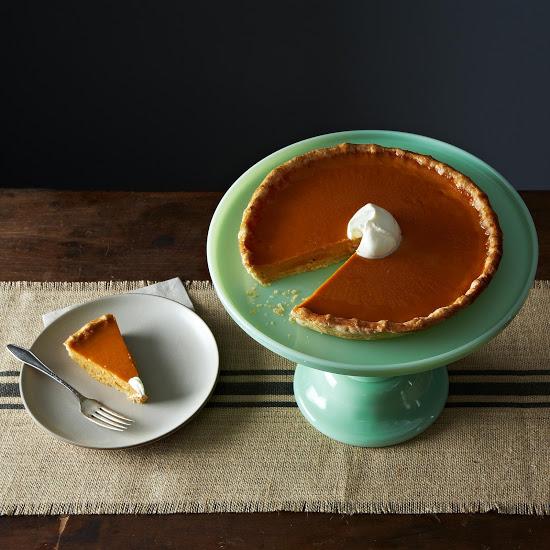 Left, the jadeite cake stand in production; right, there it is getting some good use!

The products Mosser Glass makes are graceful, sturdy, and classic in the sense that they look just as at home on our tables and shelves as they would on our grandparents’—perhaps due in part to the popularity of jadeite milk glass in the mid-20th century and its beloved status as a collectible decades later. “I think they remind people of a time past,” Mindy told me. “They’re comforting. They really take you back.”

From mixing bowls to juicers and cake stands, the pieces are as functional as they are attractive: Mindy’s cake stand maintains a permanent residence on her kitchen counter. “I use my cake plates all the time,” she said. “They add so much as a centerpiece, whether there’s a candle on them, or a cover, or an actual cake.” 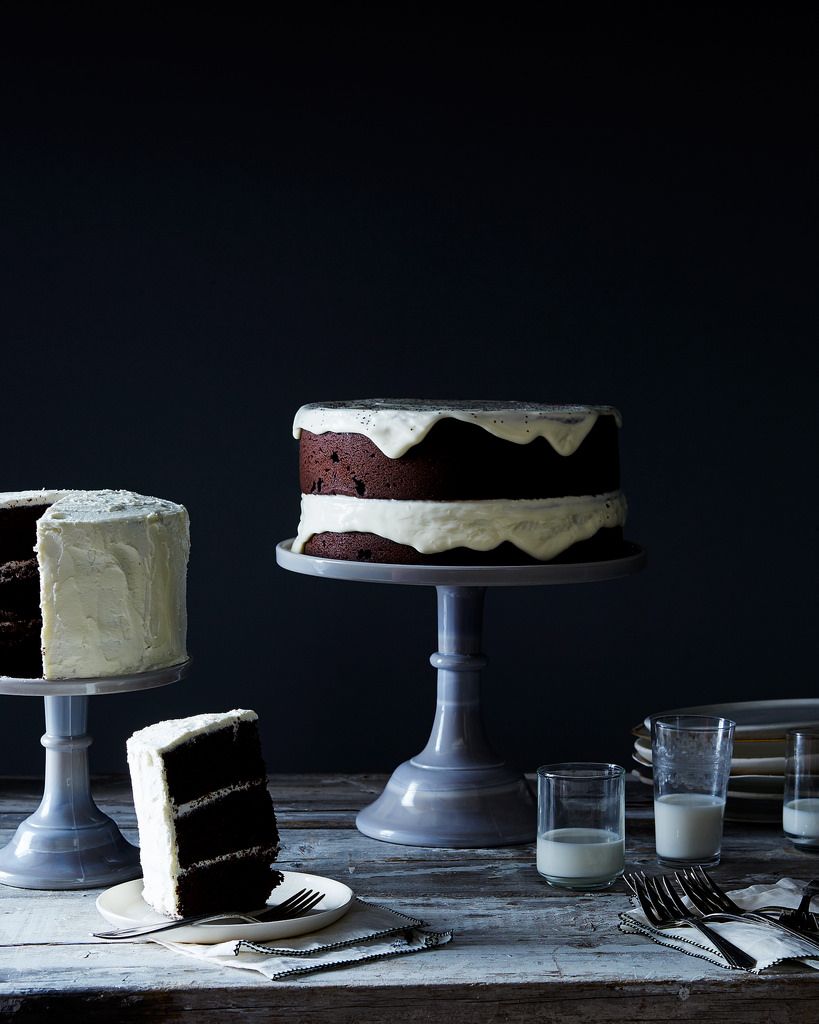 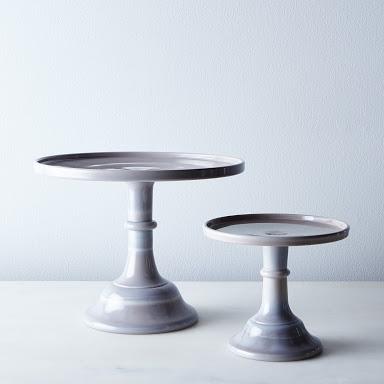 We tend to think that’s true: The jadeite Mosser Glass cake stands are front and center on the shelves in our office’s kitchen, and have been since our Shop opened in 2013. They almost appear to be lit from behind. Jadeite products are Mosser Glass’s best sellers—and some of ours, too—thanks to their soft green hue and special glow.

What makes jadeite jadeite? It all comes down to the special chemical cocktail that colors the glass, Mindy told me. Each Mosser product, whether milky white, pink, or jadeite in color, has its own carefully concocted chemical recipe that ensures each piece is deeply hued. 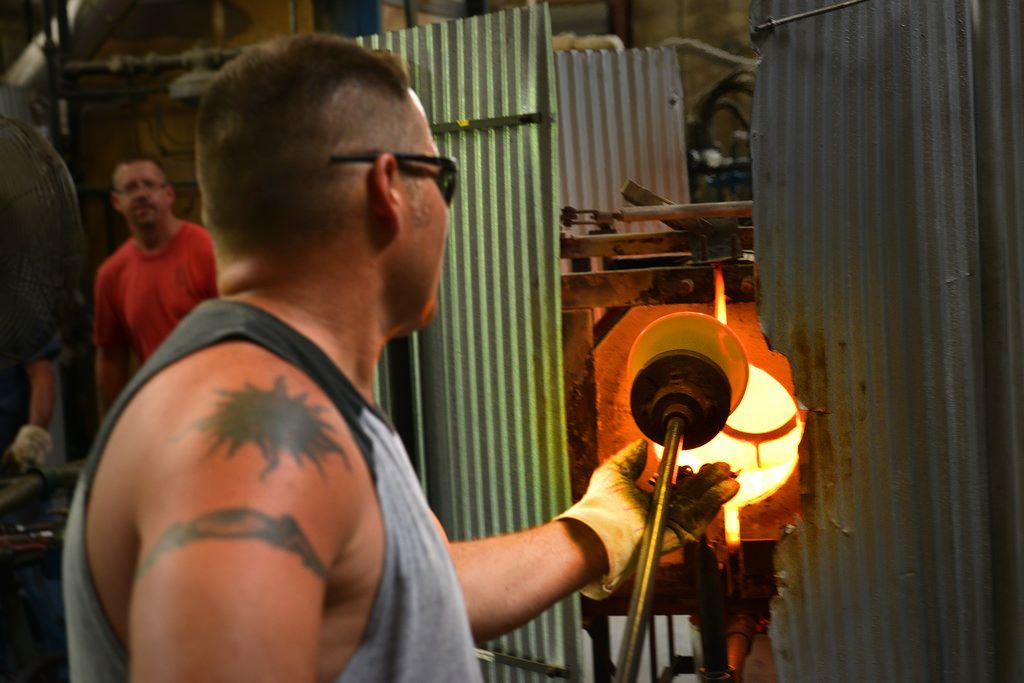 A Mosser Glass employee fires a cake stand in one of the company's six furnaces.

Mosser Glass has grown to the point where they now have six big furnaces, each with a different color of glass inside, burning daily, and they are beginning to experiment with pieces that require very different production processes, like domes for their cake plates. But even with this growth, Mindy told me that she and her siblings have been careful to maintain the personality of the company her father founded.

He would, for example, name new pieces after his grandchildren. “We would do a lot of miniatures in the late 80s, like children’s dish sets,” said Mindy. “He named one after his granddaughter. It’s still happening—all the girls get something named after them.” Mindy was a namesake, too: When glass collectibles were very popular, her father would issue limited-release glass clowns. The only girl clown was the Mindy Clown. 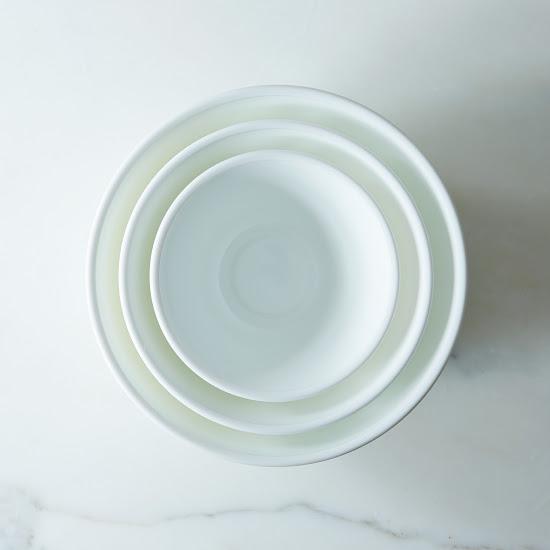 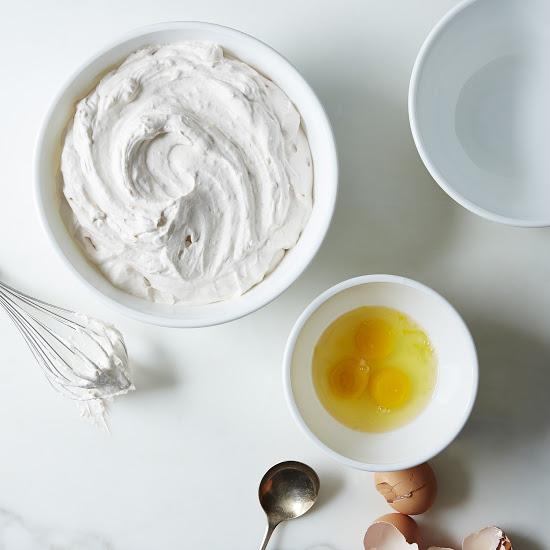 While the clown series is no longer in production, the personal aspects of the company—particularly the products’ handmade, American-made nature—are a priority for the Mossers. “It will continue going on,” said Mindy. “We’re very family oriented. We want the company kept in the family in the future as long as we can.”

All photos of production courtesy of Mindy Hartley; photo of gray cake stands and white bowls by Mark Weinberg; photo of pumpkin pie on jadeite stand by James Ransom

Tim December 27, 2017
Are 93 year old grandma passed away and we have found a lot I mean a lot of Mosser glass appears mostly from the 80s uncertain exactly though is there a good site we can go on to check values

Robert H. January 22, 2016
So why did my Mosser bowl, purchased at the factory store, split in the middle and break apart?

Caroline L. January 22, 2016
I'm so sorry that this happened to you! We really believe in these designs, and we want you to have a good experience with them. I'm sure that the folks at Mosser would be glad to talk to you about it!