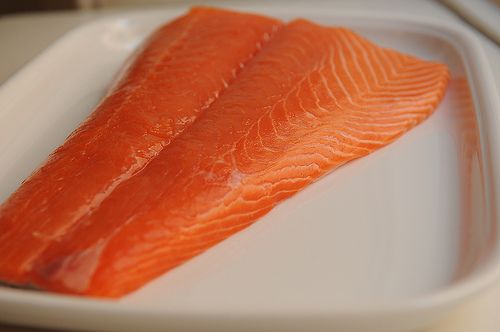 Recently, we've been trying to eat more fish in my house. One day I was at the market looking for wild salmon and discovered they were out of it. Although I had never cooked with it before, I bought some arctic char at the fishmonger's recommendation. That night, I improvised with a few things I had in the fridge, and the resulting recipe is one I've repeated many times since. It's simple and quick, but it never fails to please.

Keeping the skin on, you coat the fish in a lemon herb mayonnaise and then cook it, skin up, at a very low temperature (250°) for 15 to 20 minutes. Then, you flip it over and broil it quickly to brown the top. The gentle cooking keeps the fish really tender and prevents it from drying out, and the broiler gives you the added benefit of some caramelization -- it's the best of both worlds. You can make this recipe with salmon, but char is a fish you should get to know if you don't already. Not only does it have a mild, rich flavor, but it's also an eco-friendly choice.

1. Position a rack in the top third of the oven and set it to 250°F. In a small bowl, stir together the mayonnaise, herbs, lemon zest and juice, and pepper to taste.
2. Season the flesh side of the fish generously with salt and pepper and slather with about two thirds of the lemon herb mayonnaise, making sure to cover all of the fish. Gently turn over the fillets and place them, skin side up, in a shallow baking dish just big enough to hold them. Put in the oven for 15 to 20 minutes, until the fish is just beginning to turn opaque around the edges (cooking time will vary according to the thickness of the fillets). Remove from the oven.
3. About five minutes before you are ready to eat, turn on the broiler. Gently turn over the fish (you can probably do this with your hands, as the fish will not be very hot) so that the flesh side is facing up and slather on the rest of the mayonnaise mixture. Broil for a minute or so, until the top of the fish just starts to brown and it sizzles a bit. (You do not want to broil it for much longer than this, as the fish will overcook.) Serve immediately.

Tom B. October 4, 2009
I will definitely try this. I have been struggling with the texture of the wild salmon I cook. Since char may only be available frozen sometimes... do you have thoughts about frozen fish. Frozen wild salmon, frozen shrimp vs. fresh. I know it depends on conditions... quick frozen or truly fresh fish.

mariaraynal September 29, 2009
This sounds like a terrific technique, and one I will definitely try myself. Always looking for new ways to cook fish.

Merrill S. September 29, 2009
Thanks! I find it so easy, and the fish really turns out beautifully. Let me know if you end up liking it!