The Secret to a Not-Bland Cucumber Salad

Alexandra Stafford shows us how to help cucumber salad live its best life. 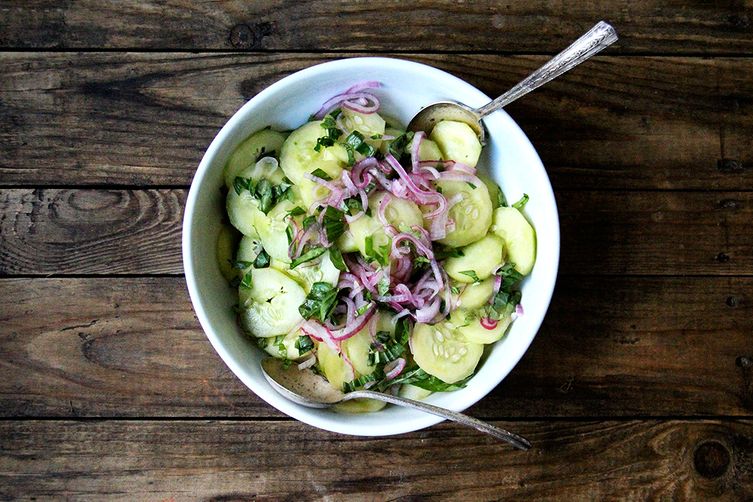 A few weeks ago, a cucumber salad I brought to a neighborhood gathering threw me into a tizzy: It tasted bland. It looked tired. I couldn’t handle it.

I asked myself what went wrong again and again as I periodically made my way to the buffet table to give the cucumbers a toss, hoping the juices pooling at the bottom of the bowl might revive the salad. Breaking Julia Child’s cardinal rule, I apologized for my dull contribution to the dinner and continued to obsess until my husband gave me a look that said: No one cares about your cucumber salad but you.

The following morning I opened Chez Panisse Vegetables hoping to find an answer. Indeed, Alice Waters had some insight: “Cucumbers dressed in advance or used in a sauce may give up too much water and dilute the flavor of the dish. To avoid this, lightly salt the prepared cucumbers, let them sit in a strainer for 10 minutes, wrap them in a clean kitchen towel, and wring out the excess moisture.” 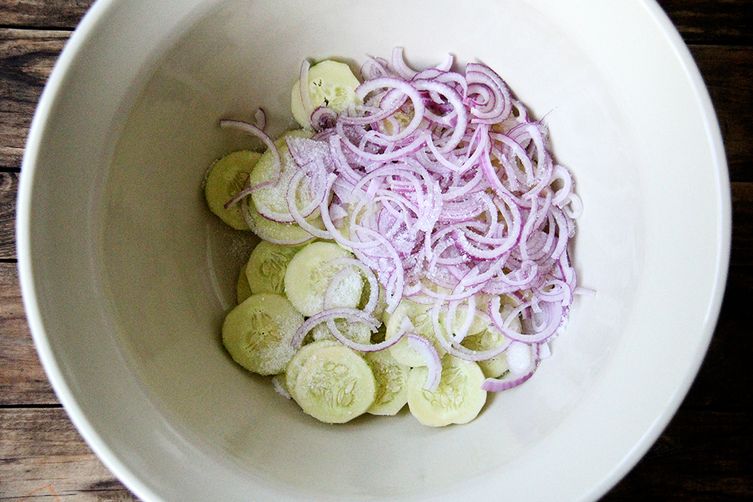 It made perfect sense. Like so many water-filled vegetables, cucumbers benefit from a brief salting, a simple but important step to draw out moisture and prime them to receive a dressing. So while the salad I had made promised to be great—farmers market cucumbers, basil from the garden, a flavorful dressing—it had been doomed from the get go: With all of that cucumber water, it didn’t stand a chance.

I tested Alice Waters’ method later that afternoon, salting the cucumbers before tossing them with vinegar, olive oil, and herbs. One bite calmed my restive brain and reminded me how good cucumber salads can be—and, above all, assured me my public meltdown hadn’t been in vain. 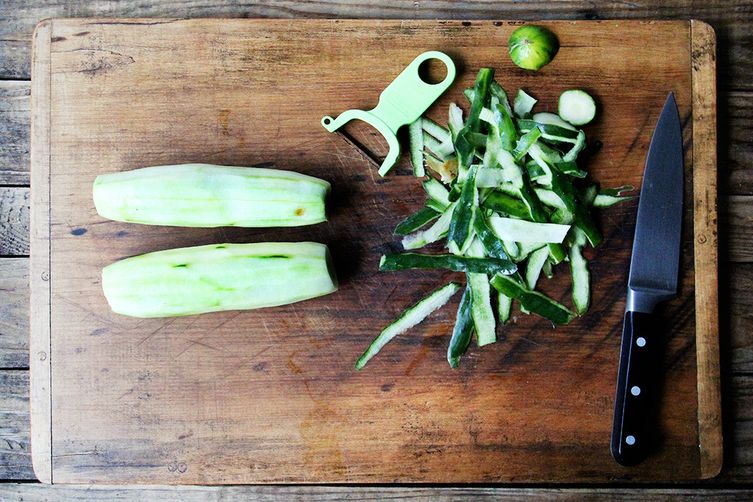 Choosing and storing your cucumbers:
This time of year, farm stands abound with both small pickling cucumbers and larger slicing cucumbers—look for cucumbers that feel firm and heavy for their size rather than spongy or soft. And because they dry out soon after they're picked, store them in a bag in the vegetable bin of the refrigerator for 3 to 5 days.

Prepping your cucumbers:
Cucumbers—especially from a farmers market or a C.S.A.—tend to be dirty. Wash them well before using, and peel them if they're thick-skinned or bitter. If the seeds taste bitter, halve the cucumbers lengthwise and scoop out seeds with a spoon. (If you're cooking with English cucumbers, it's not likely you'll have to do either.) 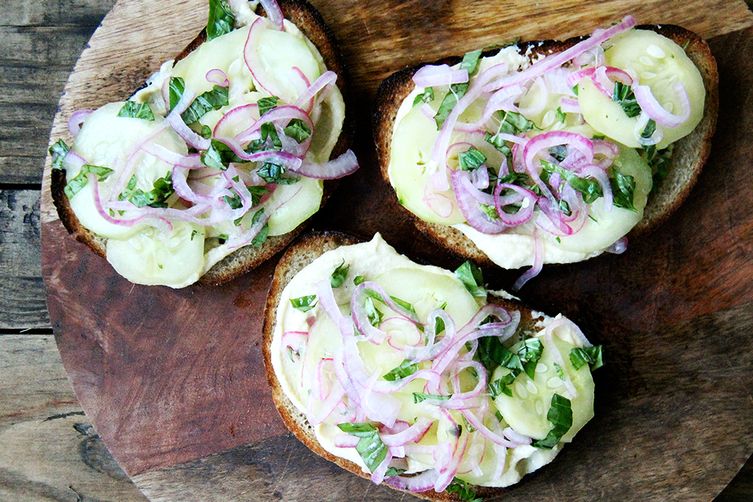 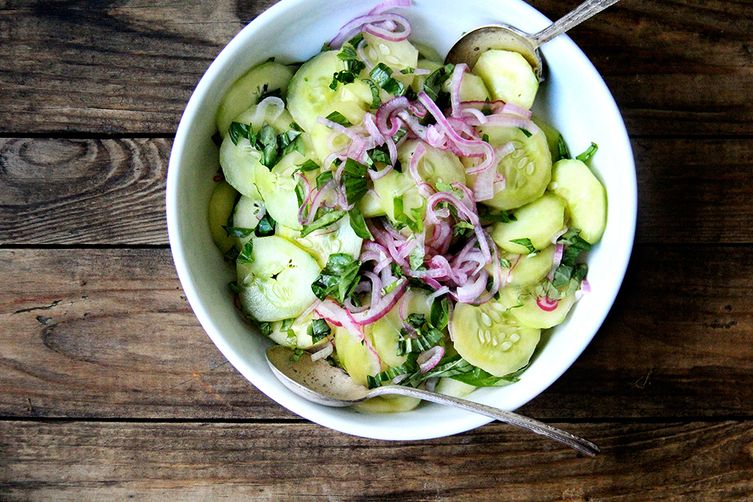 Alexandra S. August 28, 2016
I love it! Embarrassed to ask: what is chaat masala? I can google it of course, but it would be more fun to hear from you :)

Joy B. August 27, 2016
Adding a little sugar along with the salt so you're essentially brining the cucumbers makes for a delicious salad too!

Alexandra S. August 28, 2016
So true! I used to be obsessed with this ginger-vinegar-sugary cucumber salad and the brine was SO good.

Lisa M. August 27, 2016
I read somewhere recently that cucumbers last longer I refrigerated. I had some fairly large cukes from a neighbor's garden - fairly thick skinned - and they were fine even after ten days on the kitchen counter. Not sure if this method would work with kirbys or the small Persian variety. They don't seem to hang around long enough to find out

Alexandra S. August 28, 2016
Wow, amazing! Such a great tip. More and more I keep so much produce out of the fridge, but I've always kept cucs in the fridge. Going to experiment!

Jessica F. August 16, 2015
Zaqary, I had so many adorable little Boothby Bay Blonde cucumbers from a local organic farmer the other day that in desperation I googled the (legendary) Julia Child recipe for Braised Cucumbers. It seemed like a lot of work for a few cukes, so I adapted it I sauteed them in a little bit of unsalted butter, added a drop of lemon juice and a handful of chiffonaded basil. It was sublime and a total surprise.

Cathy B. August 15, 2015
Hungarians make a simple cucumber salad -- yes, salt thinly sliced (& peeled) cucumbers and let sit for at least 1/2 - 1 hour. Then you squeeze out the water (okay to rinse first to get some of salt off). We dressed the salad with white vinegar only and some thinly sliced sweet onions. Sprinkle bowl of salad with paprika. Leftover salad will last several days in fridge. This would be good with rice vinegar.

Alexandra S. August 16, 2015
Love the idea of paprika! So interesting.

zaqary August 15, 2015
Would anyone have any cooked cucumber dishes? I ate one once at a Chinese restaurant in Manhattan, but I couldn't tell you what was in it.

Jessica F. August 16, 2015
Zaqary, I had so many adorable little Boothby Bay Blonde cucumbers from a local organic farmer the other day that in desperation I googled the (legendary) Julia Child recipe for Braised Cucumbers. It seemed like a lot of work for a few cukes, so I adapted it I sauteed them in a little bit of unsalted butter, added a drop of lemon juice and a handful of chiffonaded basil. It was sublime and a total surprise.

Alexandra S. August 16, 2015
I think this one sounds interesting: http://www.foodandwine.com/recipes/hot-and-spicy-cucumbers
It's also by Jeffrey Alford and Naomi Duguid who are responsible for this genius recipe: https://food52.com/recipes/18419-jeffrey-alford-naomi-duguid-s-spicy-cucumber-salad

Bella B. August 14, 2015
I try to find smaller cucumbers, they seem to be a lot better for salads and sandwiches. In my garden they may go from small to very large overnight, though!

Alexandra S. August 14, 2015
Yes, absolutely! Small cucs seem to have smaller seeds and rarely taste bitter to me. Thanks!

Annada R. August 14, 2015
One way to prevent cucumber from watering could also be to eat right away -:))
I make cucumber in 2 ways. First is the raita. Peel & dice into small pieces. Add plain yogurt, thin slices of green chile peppers, some cumin powder and salt.

Second way is called "savory cucumber" in my mother tongue. Soak yellow split moong beans in water for an hour or two. Grind these soaked beans coarse. Peel and dice cucumbers. Mix the beans, thinly sliced green peppers, salt and some lime juice. Top it off with "tadka" or oil seasoning - heat 2/3 tbsp of vegetable oil or Canola. Just before oil starts smoking add 1/2 tsp of black mustard seeds and a pinch of turmeric. Hit the cucumber and bean mixture with this tadka. The sound and smell that follows is divine.

Alexandra S. August 14, 2015
Yum! I've never heard of tadka — sounds interesting! Going to have to order some. I love raita, too.