2 New Chicken Books You Won't Want to Cook From

Portraits, rather than paillards, define two new chicken-focused titles we recommend for your coffee table. 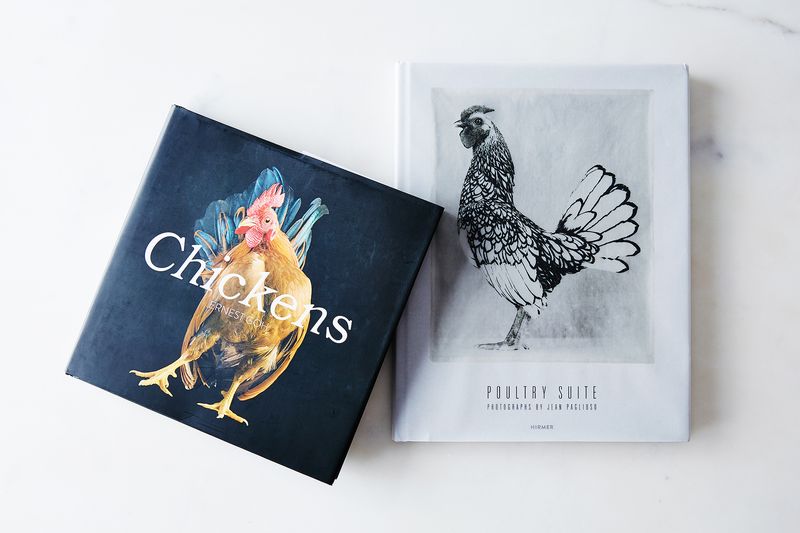 Chicken is a common subject around these parts. It's what we're often eating for dinner, or at least what we're planning to eat for dinner if we could just find a quick, easy recipe sometime before 6 P.M... (psst, check here!). Two recent books on the topic, however, take poultry off the table entirely—and into the world of bold, captivating, biologically bizarre art.

Chickens, a title by Ernest Goh, hit shelves in March, and Poultry Suite, by Jean Pagliuso, recently became available. You'll find them in the same aisle of the bookstore (you still go bookstores, right?), since they're similar in scope: Both books are collections of chicken portraits by skilled photographers, focusing specifically on chickens bred for show—a concept strange and delightful in and of itself. But let the pages of either fall open, and it's instantly clear that you've got something more on your hands. Here's what makes these chicken books different—and equally worth your time. 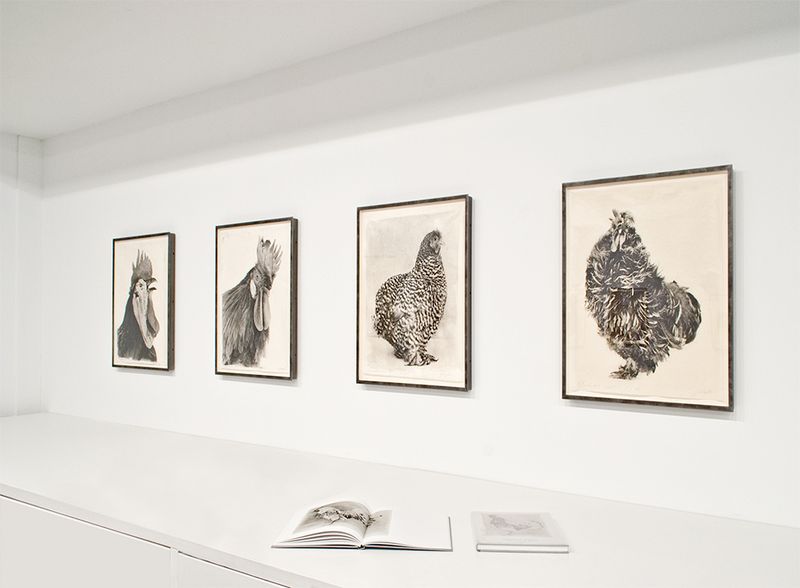 While Jean Pagliuso's Poultry Suite was only just released, her chicken portraits are not entirely new to the world: A selection of the original works featured in the book went up in a spring exhibition at the Mary Ryan Gallery in New York. But even if you picked up Poultry Suite not knowing about that installation, which was covered by many news sources (including our own), it's clear from thumbing through that both Pagliuso and her publisher see each work—and the collection—as very sophisticated, even high-brow art.

Pagliuso is a fashion photographer (her shots have run in Vogue and Rolling Stone) and the way she captured these chickens is clearly influenced by an eye for flourish and trend. The birds look like models in ridiculous hats or mink coats, a little bit shy but only because playing coy is a good look—and it's so fun to check out each one. Furthermore, they're not just photographs. Pagliuso's process is to apply "a silver gelatin emulsion onto handmade Thai Mulberry papers before exposing the negative," according to the gallery, which amounts to black and white images, almost ink-like, that have an eerie and crisp transluscence to them, on paper that seems as thin and easily crumpled as tissue. 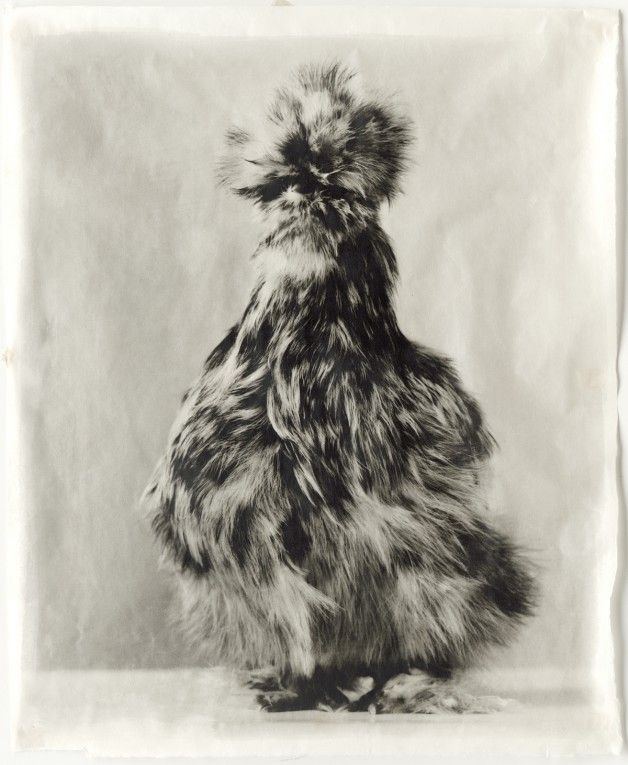 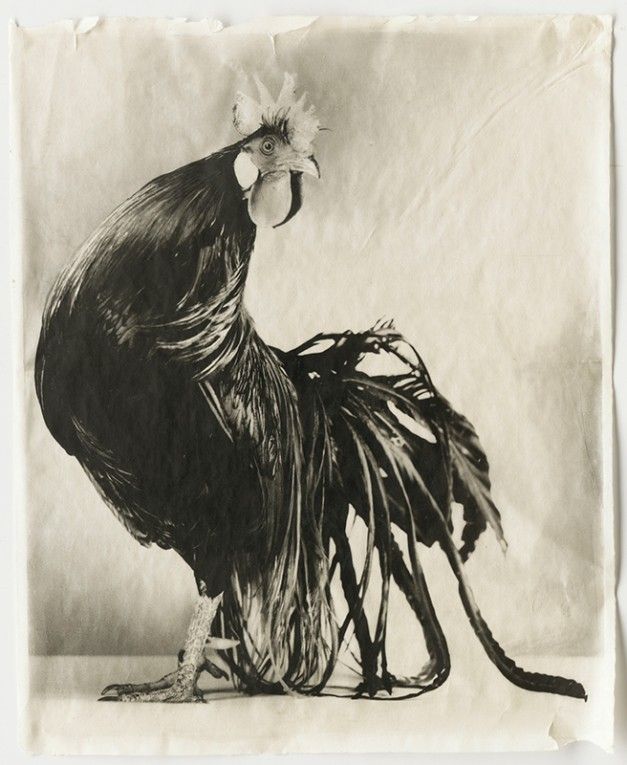 There's something ghostly to the overall feel of the images—and since Pagliuso created these works in homage to her late father, a man who bred chickens for show, perhaps that's to remind you that the collection is an elegy. Coupled with the sheer strangeness of chickens up close, it's an impressive and moving book to look at—though my one complaint is that this book won't quit reminding you of just that. From foreword to epilogue, including a smattering of paragraphs inserted between images, the only actual copy is from critics praising...this very book.

Since the book is, ultimately, a collection of chicken pictures, I can't help but find the constant and deadpan critical praise a bit odd, and even jolting—but maybe what I want from Pagliuso's art is just something less serious than she intends. "The viewer cannot rest, endlessly trying to untangle the image from the objectness of the artwork," says Clifford Ross on page 33—and maybe that's true for you, but I find good art most bewitching before I read things like that.

Equally absorbing but more refreshingly lighthearted is Chickens, by Ernest Goh, which is also a collection of portraits of pagaent birds. "Love all creatures great and small, even the crazy-looking ones," reads the dedication to his nephew. 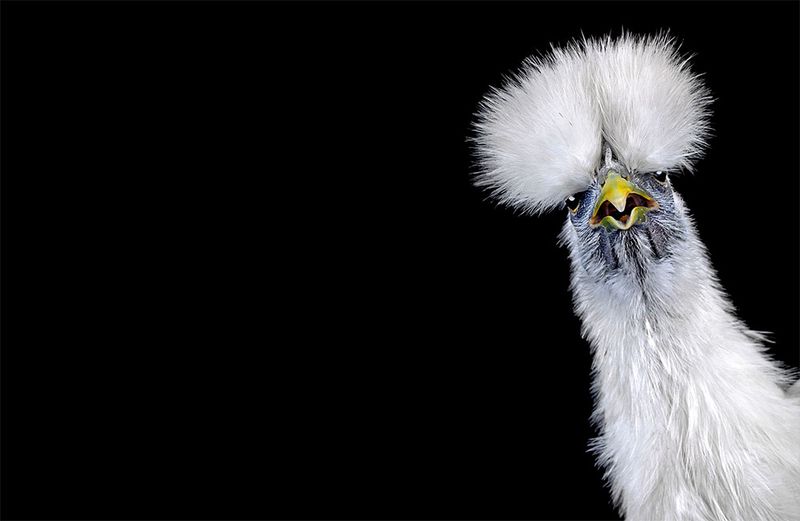 Goh's colorful chicken portraits, especially compared to Pagliuso's greyscale ones, are fantastical to flip through. The birds appear in full color and exact detail, set up like subjects in a studio portrait session against a dark black abyss of a background. Each one makes you a little nervous (the gaze of a chicken is intense) and also makes you laugh—thanks to the copy studded throughout. With section openers like "Cock O' The Walk" (preening man birds) and "You Can Be a Rooster One Day, and a Feather Duster the Next" (chickens so fluffy you can't see their eyes), and "birdbrain," featuring an unbelievable display of combs and wattles, it's a book that's meant to surprise and delight.

At the end, Goh indicates all the breeds featured in each photograph, and whether the model bird is a cock or hen. It's clear that his intent is to raise awareness about these breeds, about the diversity and jarring beauty of chickens in general. Pagliuso's, by contrast, is more of a meditation than a showcase, but an inviting look into the world of breeds and birds nonetheless.

So go on and revel in the oddly beautiful, slightly icky, and wholly unexpected world of show chickens. It's much more fun than worrying over dinner—which reminds me that I'll be me making fried eggs for mine.

Anne S. September 10, 2015
I love that you write about things like this... Very cool artwork, I plan to look into it! And I've never raised chickens, but sort of wish I did...