The canvas basket factory that taught us that storage—even laundry baskets—can be beautiful. 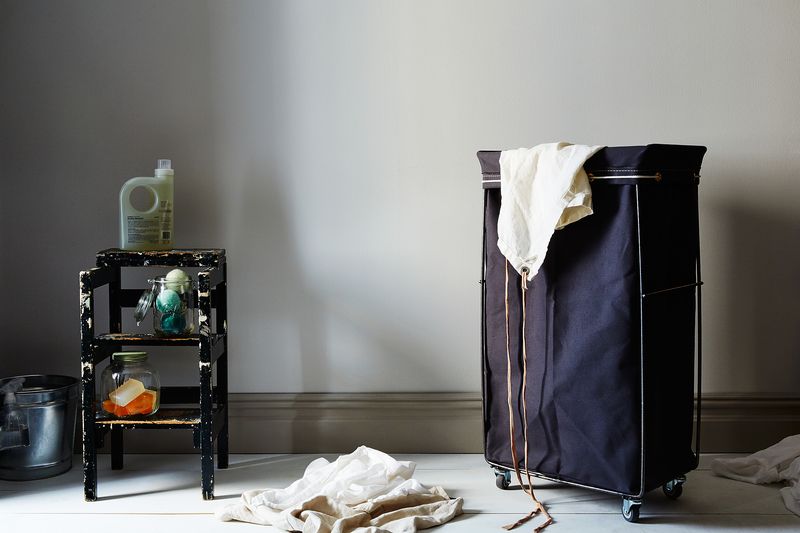 When I called Steele Canvas last week, Frank picked up the phone, then introduced me to John (or was it Chris?), who then handed the receiver to Paul who explained, "My brother’s name is John but he goes by Chris here because my father’s name is John." He then added, "My mother who also works here will not let my father retire on the Cape, so for now, it's Chris."

When John Senior started working at Steele Canvas in the 1950s, the small shop in Cambridge, Massachusetts had been making steel and canvas baskets for New England coal workers, textile companies, and factory business for thirty years. Even as the industries they served changed or died out altogether, production continued on the handmade baskets. Paul, who works primarily with international customers and retailers, said, "The previous owner and my father had a fantastic relationship—his own son had died years back, and he and my father had a father-son relationship." When the original owner passed away from a heart attack, Paul's father took over the shop, which soon became a family business—and not just because his entire family has a hand in it. 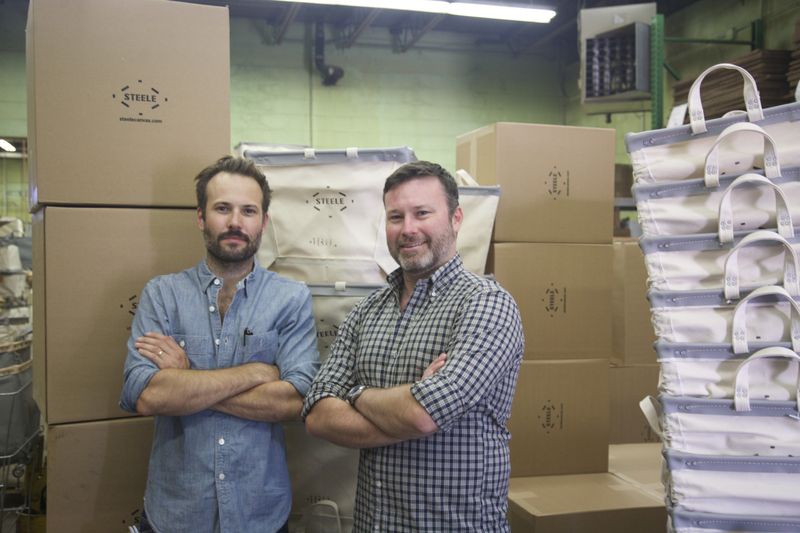 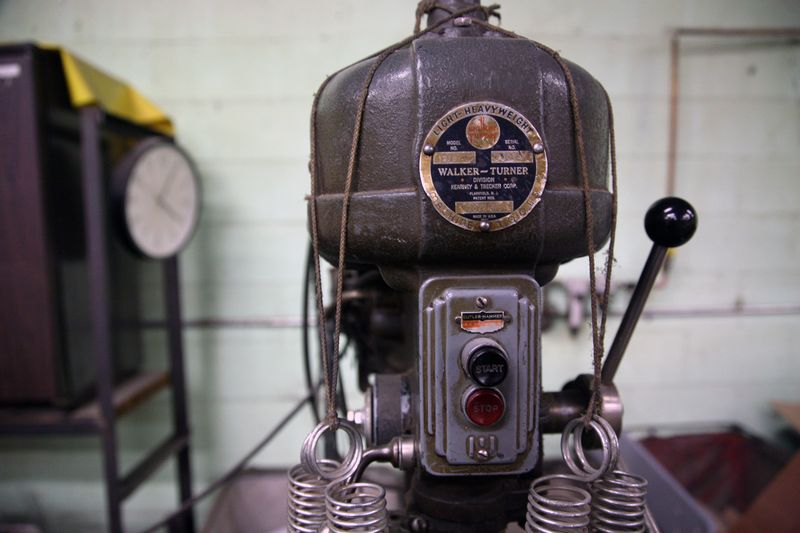 Left: John (right) and his brother Paul (left) have been helping their father run the family business since they were kids; right: some of the machinery in the factory dates back to the company's foundation in 1921.


Several of the people who make up the team of just under fifty employees at Steele Canvas have been with the company for over thirty years, and even over the phone, it's clear that Paul considers each of them to be family. In the morning, the team gathers early; they come in to have coffee together before the foreman, Raúl Aliaga, who's been with the company for nearly forty years, gets them moving. "Raúl is 81 now, but we always tell him that he's more productive in his 80s than we was in his 50s—he's a little man but he moves faster than anyone I know. He's constantly pacing the shop floor and tweaking this and keeping an eye on that," Paul added, "It's because of the people like him who have been here for 30-odd years that there's this wealth of knowledge and history that keeps us making better decisions."

Paul himself was practically raised on the shop floor. He told me, "We grew up with the baskets in our home and since I was a little kid, our sisters were putting my brothers and me inside of the baskets." And while he never thought he'd end up working for his family business, he can't imagine working anywhere else now. He told me, "Walking into the shop is the highlight of my day—I get to see the guys who have been here forever." He cited the head steel cutter, Willy, whose son is working there for the summer, "It's terrific to be able to see the effort these guys are putting into the products." 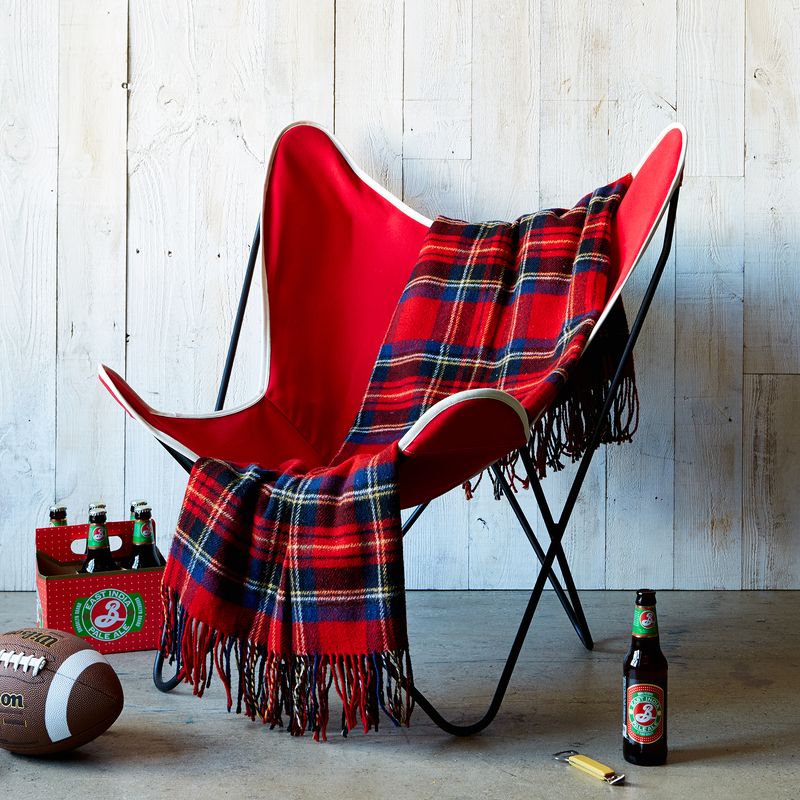 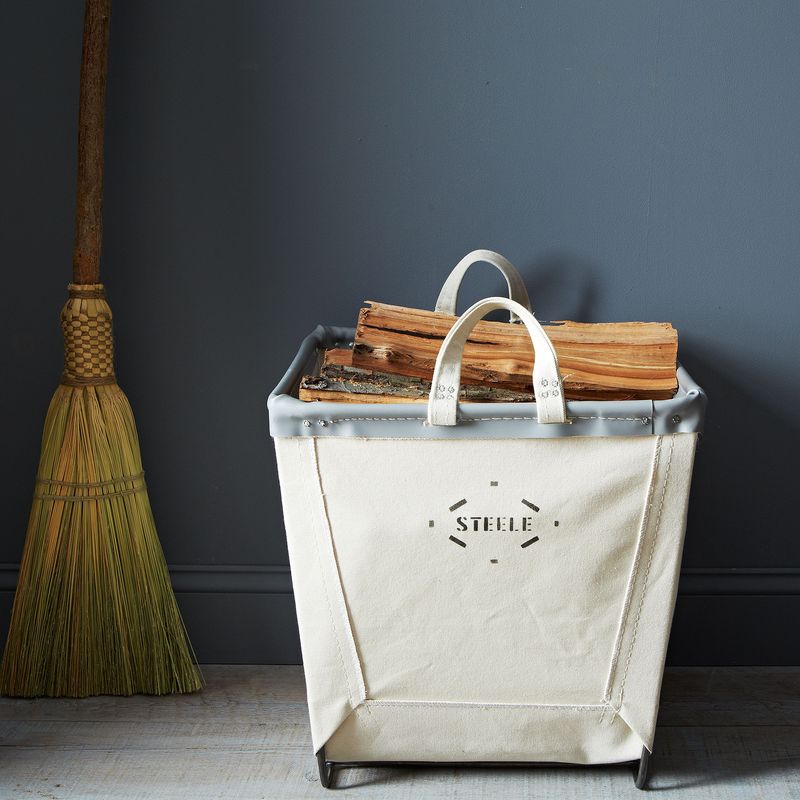 Besides the landry baskets, the company also manufactures products like steel sling chairs and firewood holders—both available in our Shop.


It's clear, just from looking at the products themselves, how much heart and soul goes into them. Each basket is made by hand in-house over the course of three to six weeks (if it's custom) and they're made to last. Paul says that in the factory, they use baskets to hold steel that have been used for for almost one-hundred years. Paul said, "These things are going to last—whether it's the baskets or the sling chairs, they're cut with half-inch steel, and there just aren't many people making them like that."

That's likely why they appeal to so many people—Steele Canvas has created canvas totes for J.Crew, made baskets for New York City playgrounds, seen more and more people purchasing the laundry baskets for their own homes, but still make baskets for their bread and butter: construction and factories. Paul said, "There are so many different customers, projects, and shipments, and we've been doing business with people all over the world, but when a very large, angry construction worker shows up at the shop, we have the flexibility to stop production and get done what really needs to get done—depending on the size of the person who's showing up." 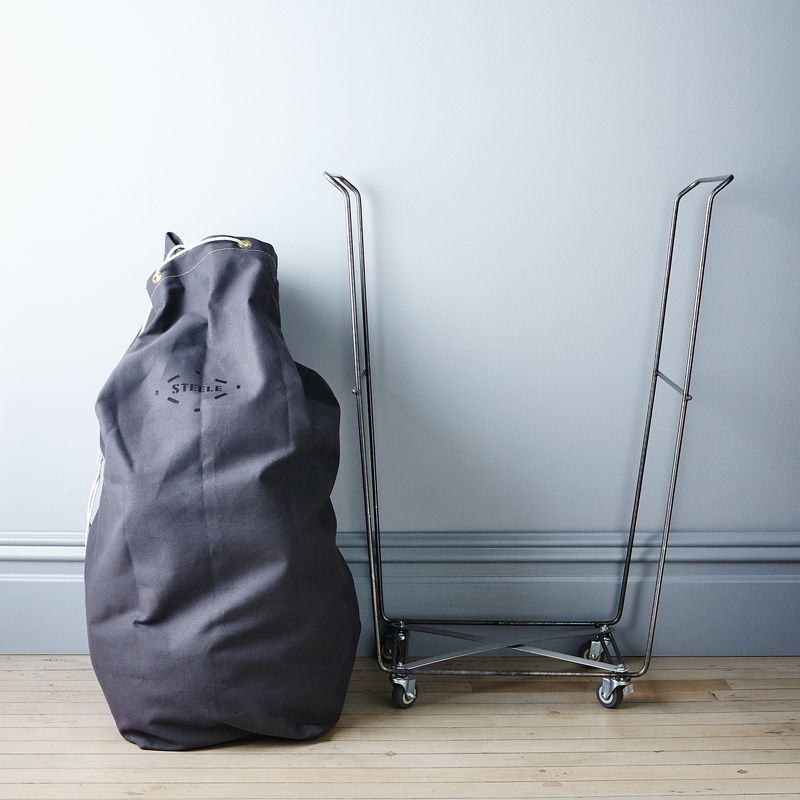 One of our favorite things about the exclusive Steele Canvas laundry basket made for the Shop is how easy it is to remove for carrying.


Because we don't have the same intimidation factor of a daunting, on-site visitor, we were especially thrilled when Steele Canvas agreed to collaborate with us on an exclusive basket. The basket, which borrows the same design of their popular, workhorse carry baskets, is more small space-friendly. It's tall and narrow so it can fit into small places like closets, and has wheels, which makes it easy to maneuver around the home—or you can take the laundry bag out to carry it to the laundromat. Best of all? It's available in our favorite shade of grey, and as with all of their baskets, it's handmade-to-order.

More: Have you heard? We're crazy about grey.

When I asked Paul if he uses the baskets in his own home, he laughed and said, "I think I've probably taken advantgage of the baskets more than anyone else." He lives in a small apartment with his husband and their dog Kitty (who's afraid of cats), so he explained that the baskets are key for storage, "I have two baskets with wooden lids on them where I store all of my winter clothes, and in my closest, I keep everything in the baskets on shelves." He added, "It's basically a showroom—I use a lot of our products."

Sharon I. February 28, 2019
I want a basket about 8" high that can hold a few days' worth of newspapers before I take them to recycling. . . where can I get?