How Much Better Does Homemade Butter Really Taste?

I conducted a blind-butter tasting at Food52 to find out. 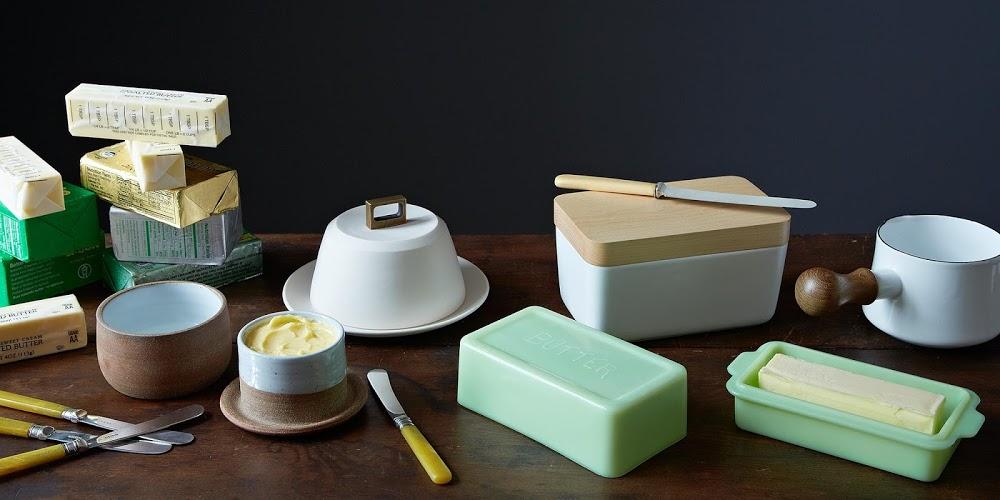 Tomato soup, baguette, and butter: These were my go-to lunch items while I studied at University of St. Andrews in Scotland. It wasn’t until my first trip home over Thanksgiving that I realized how spoiled I had become by rich, flavorful British butter, not to mention the French butter I sometimes splurged on.

This realization surprised me. I always thought all butter was equal—equally delicious!—but I was wrong, terribly wrong. At home during that first Thanksgiving back, I found the American butter I always loved was bland and waxy. Using it to bake was fine, but I no longer felt inspired by buttered toast, having had a taste of British buttered toast. 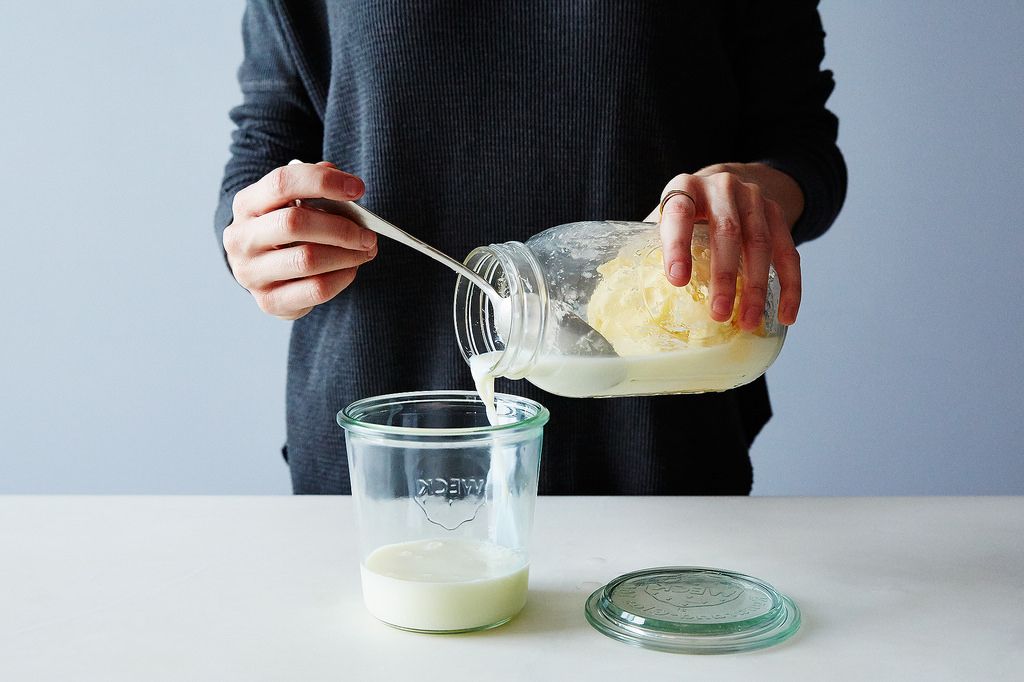 So what did I do about this world-ending conundrum? Research.

I read up on the discrepancies between butter and better butter, studying Dan Barber’s “single-udder butter", Kate’s Homemade Butter, Ronnybrook’s European Style Butter, and many others.

I was motivated not only as an avid butter consumer, but also as a Sustainable Development major: Since butter is made from a single ingredient, its taste clearly reflects its origins.

And beyond reading, making homemade butter became the easiest way for me to learn about the effect of different cow-types, farming practices, seasons, geographies, etc. on the quality and flavor of butter. 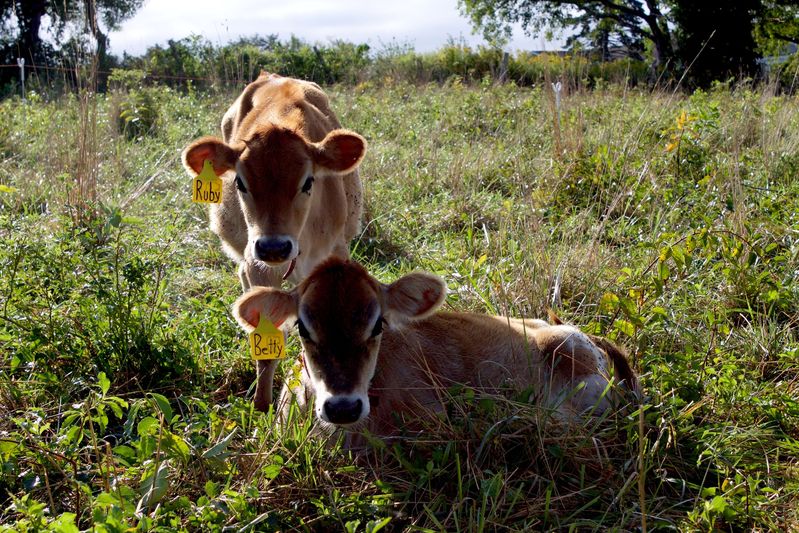 
While my butter obsession led me to visit farms, eat (way) more butter than one person should be allowed, and talk with as many shopkeepers as I could about butter varieties, I had yet to answer one fundamental question: Can anyone else (who is less obsessed than I) tell the difference—and do they care?

Luckily, I recently joined the Food52 team, where I am surrounded by people eager to participate in my first-ever blind butter tasting. Without any background on the different types, they tasted a flight of three butters: 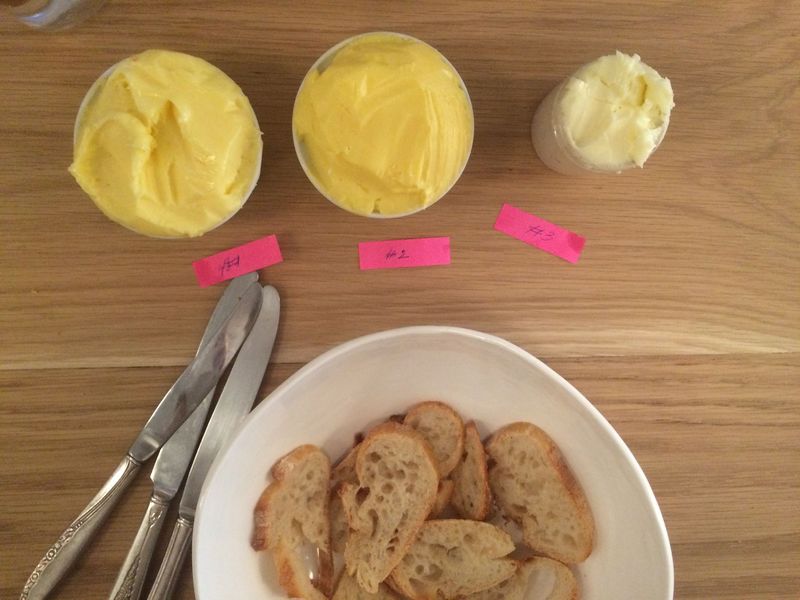 And the results are as affirming as they are amusing. Tasters were asked to rank the butter on a scale of 1 through 5 (for a maximum of 60 points). Butter #1 was victorious, albeit with butter #2 coming up a close second. Butter #3 trailed far behind. 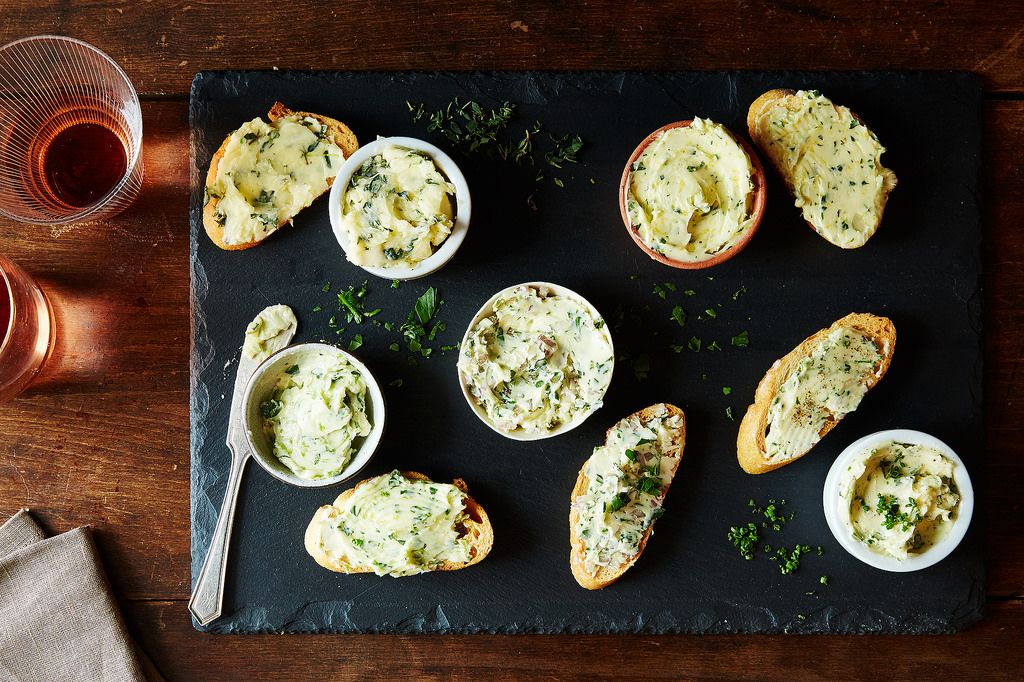 Here are the Food52 team’s unfiltered reactions to each one: 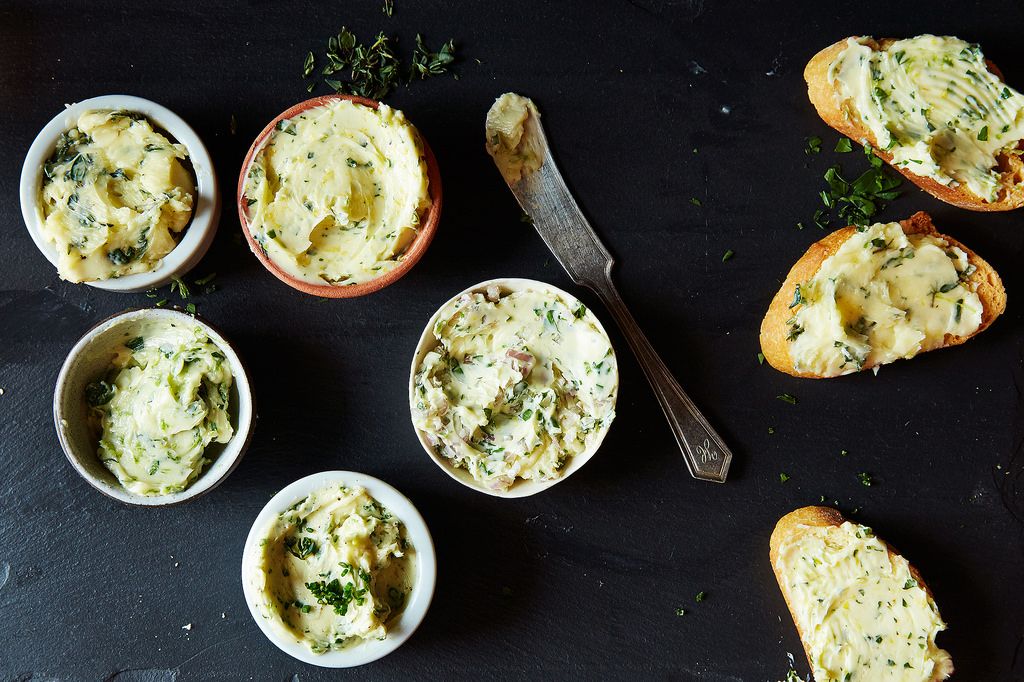 So what did I learn?

First, that I’m not the only crazy who appreciates quality butter over average American store-bought butter.

And second, that butter really does warrant the study of its terroir. While some may ask, “How bad can it be?” (fair question!), common threads emerged from the team’s tasting notes: cheesiness, texture, color, fattiness. These observations tie directly back to the cows: cheesiness and color from what the cows are fed, texture and fattiness from the type of cow, etc. And this is just the beginning: Butter tastes different when depending on the breed of the cow, the region, the season, and, obviously, the animal (or plant) from which it comes (goats! sheep! soy beans! yaks?).

Now the question is: What do you think? You'll have to make your own butter to find out.

Pat L. March 19, 2018
I just discovered Vermont Creamery's cultured butter with sea salt. I think it's great but expensive in the 4oz size that I can find locally.

bigyin59 April 16, 2017
By culturing the cream for butter with yoghurt the keeping property's are enhanced as well as the flavour, this is what is supposed to be the general way butter was produced before refrigeration.

Anointed April 14, 2017
Wow! This is amazing! I am loving that i have found this article. Can making butter be that easy. I don't believe I have ever had any other kind of butter except for store bought. I will definitely give it a try! Informative thread of comments.

Jojo F. March 24, 2016
So true Haley - homemade butter is so delicious! As Alain Ducasse would suggest, try slow-churned butter made by hand! The texture is hard to beat. :) Check us out: www.churncraft.com

ChefJune January 8, 2016
I'm interested that you didn't include any European (imported) butters in your test. I do like them better than the US butters. I'm referring to Kerrygold and to Isigny-sur-Mer both of which I can get at WFM. The butter I buy in France is better than both of those, but they're pretty darn good.

I_Fortuna January 8, 2016
I agree. The European butters are gaining popularity in my opinion. Homemade is good too if one can find a good source for cream. : )

Terrie November 8, 2015
I always make my own butter ~ from unpasteurized cream that is about 1 day old when I get it. Taste is a given and It goes beyond taste for me. Knowing the farmer that raises the cows, seeing the land they live on, and knowing what is fed to the cows gives me confidence that what I am eating is what I want to be eating. No GMO's, or other things that I read about and see going on in big factory farms. I feel lucky to have such resources so close by ~ because I live in a pretty big city.
Author Comment

That sounds idyllic! Where do you get your cream from, if you don't mind me asking? Might help some others on the thread if they live nearby.

Terrie November 10, 2015
I live in Philadelphia, PA. The farmers are in Lancaster County. If anyone is interested in hearing more, send me your email and I will share the information. One of the farmers does ship via UPS all across the country. Thanks for asking.

Lisa August 21, 2016
Terrie,
How do I send you my email. I'm interested in finding out the farmers who will ship cream!

Haley P. November 8, 2015
It's hard to compare in such general terms because "store bought" can apply to a range of quality both in terms of store bought butter and cream. If you can find good quality store bought cream, I think it does produce great butter. That said, there are also more and more gourmet butter brands on the market (Ronnybrook, Vermont Creamery, Kate's Butter, and sometimes even locally churned butters). Sounds like you'll have to try making homemade butter and compare it to your local store-bought butters to find out. A butter tasting of your own!

charles L. November 6, 2015
You've got me itching to try making my own. I'm getting out the old Cuisanarte(?).

Michael W. November 6, 2015
Having recently returned from the UK i could not agree with you more!
I also went to St Andrews.
For the bakers out there almost all cookbooks tell us to use unsalted butter, but some of the UKs top chefs are now using top quality salted butter.
Try it next time you make pastry,for example.

I am very curious to try baking with my homemade butter. Baking with British butter is very different (i.e. produces different, sometimes not great results). I think it might take a bit of recipe adaptation to get it right, but I can only believe the payoff would taste great!

Cav November 6, 2015
I spent over thirty years eating British butter. Then I moved to the States. And toast and sandwiches tasted wrong, baking was bland, even a brown butter sauce lacked punch. It took reading a (I think) Consumer Reports article, where they taste tested butters, to realise what I was missing. They both liked and disliked the Kerrygold because it reminded them of the artificial butter you get on popcorn. Which is a butter flavour formulated according to how good old fashioned butter tastes. Much like artificial banana tastes wrong because it was formulated from the now extinct Cavendish banana. As agricultural practices were replaced by industrial processes; tomatoes from a hothouse, apples picked before ripe, strawberries in winter, what actually gave these things their flavours is watered down. So much so that grass fed butter, a wild strawberry, a home grown tomato or an apple from your own tree is revelatory.

And even the grass the cows eat is important. Irish, British and French grass is different to that on the plains of the Mid-West. You get differing flavours from them. All this counts for the taste of butter, cheese, milk, cream and beef.

So yeah. .Don't get me started on American cheddar!

Hector L. November 6, 2015
Please help. I use unsalted butter and leave it in a French butter keeper on the counter so it will "turn" because I like that taste. With luck, but not always, blue streaks (mold?) will develop on the bottom of it; tasting of blue cheese. What is it? How do I promote its growth?
Author Comment

Haley P. November 8, 2015
Hi Hector, I'm not sure about the blue mold you refer to (sounds kind of scary!), but you can make your own cultured butter, which has the tangy taste you might be after. Here's a recipe from Ashely Rodriguez, one of our contributors! https://food52.com/recipes/16645-homemade-cultured-butter

I_Fortuna November 6, 2015
Since I discovered Kerrygold, it is all we buy. I have made butter at home and it is fine but now it is not necessary now.
I am wondering why your butter appears so yellow. Mine homemade never did. Do you add a colorant?
Author Comment

Haley P. November 6, 2015
Great question! I don't use a colorant. The color totally depends on the cream I use. Grass-fed cows tend to produce much yellower cream and butter in my experience.

Cav November 6, 2015
Good quality West Country double cream is thick yellow joy. Grass counts for so much when it comes to cows.

catalinalacruz November 6, 2015
I am fortunate to have access to crema from grass-fed cows, and the butter made from it is always a nice, yellow color.

epicharis October 11, 2015
As a Trickling Springs devotee, this doesn't surprise me at all. Their ice cream already tastes like butter! I'll have to get butter from their shop later this week.
Author Comment

Haley P. October 12, 2015
So glad to connect with a fellow enthusiast! Please pay them my compliments when you stop by!

catalinalacruz October 11, 2015
I have recently been making butter from Mexican crema (I live in Mexico, so easy to find), which is practically the same thing as crème fraîche. As this is a cultured cream product, the slight acidity results in a more complex butter flavor. This is the same as the touted cultured butter, and stands head and shoulders above sweet cream butter in taste. Try the eaay method of making butter in a food processor, as written up in the New York Times.
Author Comment

Ruthan November 6, 2015
This has weekend project written all over it :)

Annie S. October 11, 2015
We are fortunate to belong to an organic raw dairy buying club. We get " hard cream" which is great for churning as well as pouring cream. They also sell their own butter which is very good. But of all the butter the one that gets me is goat milk butter! It is expensive and I treat it like caviar.
Author Comment

Haley P. October 12, 2015
Sounds delish! I was just talking about testing butter made with goat milk. I'm curious about how that compares. What buying club do you belong to? Is it available to NYC-ers (crossing my fingers)?

Sabrina October 11, 2015
Even though I rarely have the time for homemade butter (read: driving to the local organic milk farm shop during the opening times to pick up the freshest cream and driving back home) when it happens it's always that much more appreciated and out of this world taste wise. Great article which again proves: artisan, local and organic is the way to go!
Author Comment

Cindie November 11, 2015
I think the answer was in the middle of the results.....SALT. Doesn't take much but it needs to be enough. There is always homemade butter in my freezer just in case I have guest coming. For normal cooking storebought butter is fine, but if I want bread and butter I want good butter and that's homemade.