This holiday back-pocket dessert goes out to all you non-bakers, and anyone who's feeling a bit tuckered from the more elaborate, delayed-gratification baking projects of the holiday season. There is no delaying of gratification here.

With 5 ingredients and about 20 minutes, you'll have a pure, joyful dessert that looks festive as all get out, which you will have casually winged together as others clear the table or between rounds of after-dinner charades. Your guests will descend upon it, hungry for a respite from pie and cake and all the holiday heft. 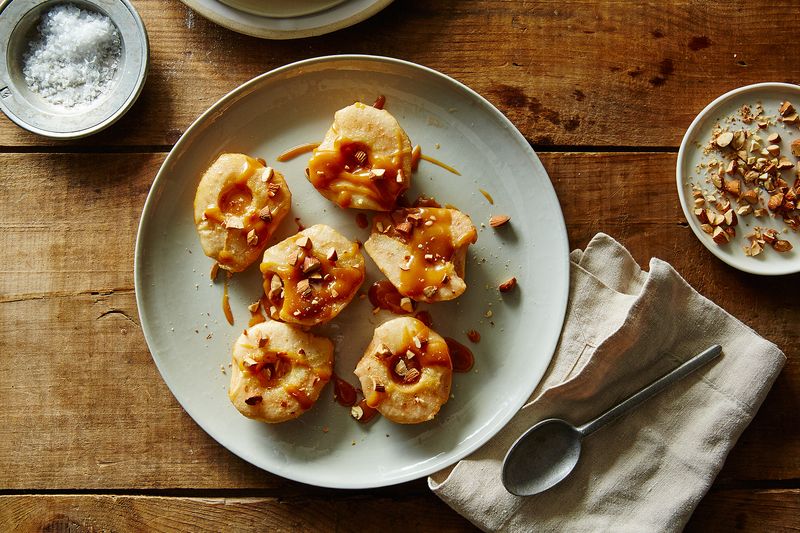 The recipe is Baked Caramel Pears from Lindsey Shere—pastry chef at Chez Panisse for 27 years and the author of the Chez Panisse Desserts—and has a long, but long-dormant pedigree: Florence Fabricant wrote about it in the New York Times in 1993, Marion Cunningham in the San Francisco Chronicle in 1998. Almost two decades later, it's time we resurrect it.

Its genius is in harnessing a small amount of butter and sugar to do their good work twice—first, by basting the pears in the oven, coaxing them along as they sweeten and singe.

In their next act, the butter and sugar pour off into the bottom of the pan, where they form a sticky toffee fond, that you then use as the base of your caramel on the stovetop. "I think it's very important to have perfectly ripe juicy pears," Shere told me. "The pear juice is what makes the sauce delicious." 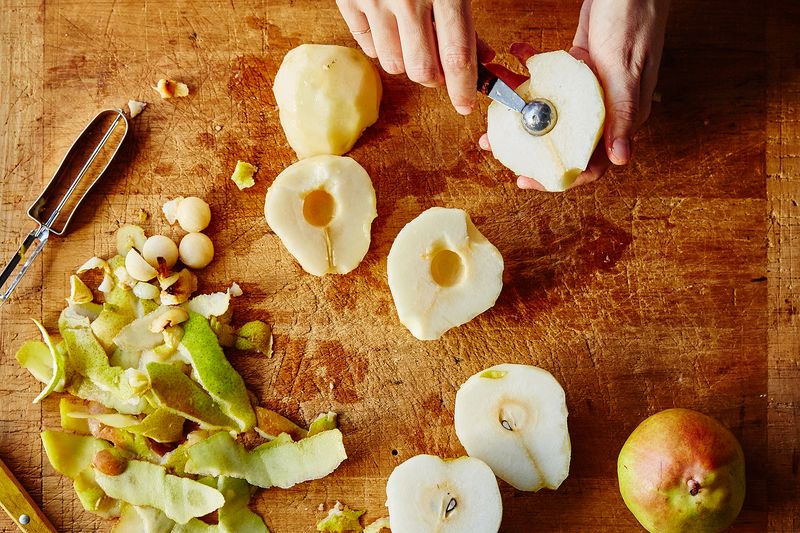 It's much more like cooking than it is like baking. You don't mix up an unpredictable batter or dough, put it away in an untouchable vessel and wait. Instead, you're slicing into pears and carving off scraps to taste. You're popping cold butter and sugar on top and watching it ooze and burble over the sides, brushing it back over the top whenever you feel like it.

You're cranking the flame and watching all the gooey dregs bubble until, at just the moment you choose, you dump in cold cream and watch it froth and steam and turn the whole pan of butter and sugar into molten sauce, effectively cleaning the bottom of the pan at once. There's no part that feels mysterious or distant; every stage is in your control; and the rewards are near-instant. Especially once you set the caramel pears in front of your charade-weary guests. 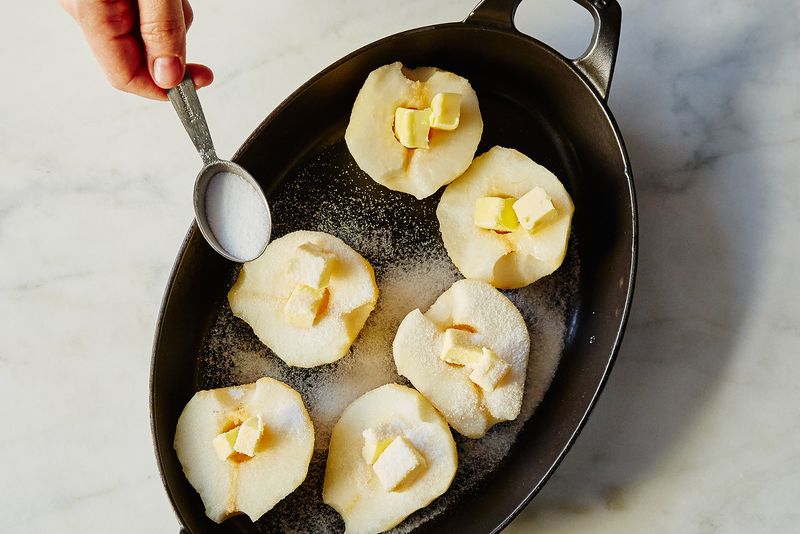 And even though it calls for making caramel, the act is entirely imprecise. I admit, I was intimidated at first too, until I made it 3 times in 2 days. I didn't have to do that—I just wanted to, and I was drunk on power!

Once, I halved the cream for a thinner, sweeter caramel. Other times, I took the caramel as far as I could, until the sugars crystallized and the butter broke and seeped out. But I just kept cooking, and dripped a little water into the pan while boiling and scraping and stirring, and it emulsified right back together. I break things so you don't have to! 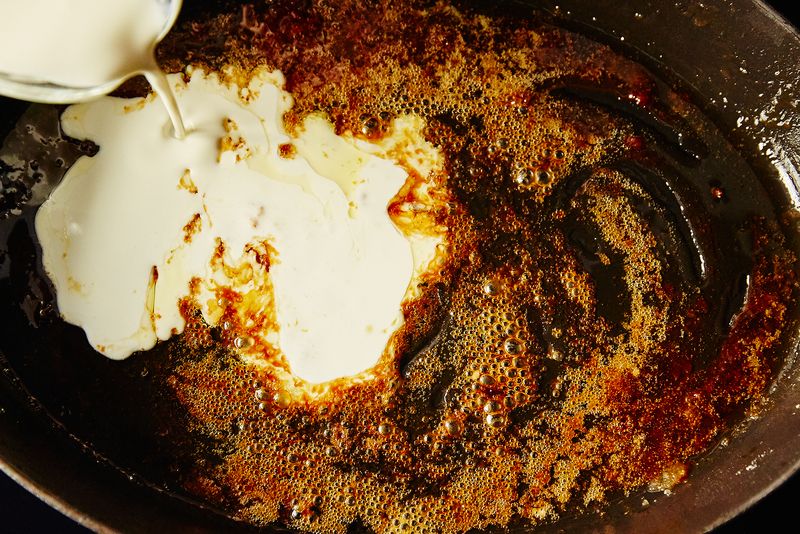 Now, about the Comice pears. Shere recommends them, because they're tender but don't turn to mush, and sweet but with an important acidity to balance the rich caramel. The problem is, Comice isn't always easy to find, unless you (according to my research) are a) near a well-stocked bodega in New York City or b) have recently received a Harry & David gift pack.

But I tried with every other pear I could find, and I can recommend the Bartlett and the d'Anjou (less so the Forelle, and definitely not the Bosc). Former Gourmet Editor Jane Lear also really loves Warrens from Frog Hollow Farm for this. 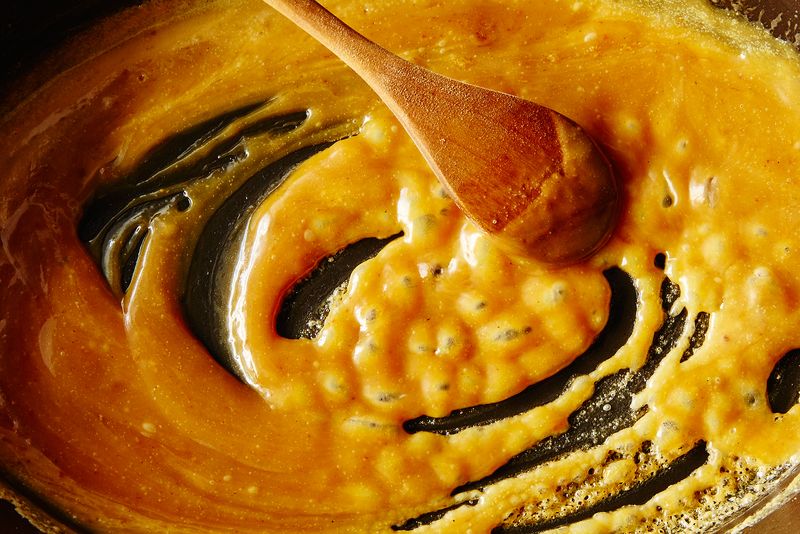 I can't help, in 2015, but want to leave the pears unpeeled, to add a pinch of salt to the caramel, to roast the pears a little darker, to take the caramel as intense and toffee-colored as I can. This recipe was published thirty years ago, before our palates were trained to expect those extremes in flavor and texture. By 1993, although caramel was starting to trend, FloFab still felt she had to caution readers: "And no matter how tempting fresh hot caramel may look, tasting or even touching it is dangerous. It is searingly hot and sticks to the skin."

I was also tempted to rename it in today's style: Roasted Pears with Caramel and Toasted Almonds, which isn't technically incorrect. But this recipe is special just as it is, well-loved for decades now, and so Baked Caramel Pears it is. 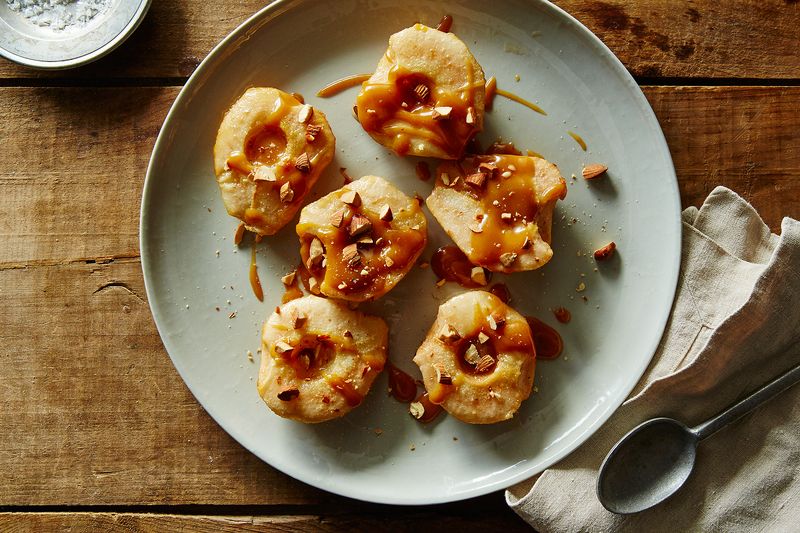 Every week, Food52's Creative Director Kristen Miglore is unearthing recipes that are nothing short of genius. Got a genius recipe to share—from a classic cookbook, an online source, or anywhere, really? Please send it her way (and tell her what's so smart about it) at [email protected].

The Genius Recipes cookbook is finally here! The book is a mix of greatest hits from the column and unpublished new favorites—all told, over 100 recipes that will change the way you think about cooking. It's on shelves now, or you can order your copy here.

Smufty December 17, 2021
For a large crowd with no basting - put sugared/buttered pears in sous vide at 175 for 1 hour. Then drain liquid into pan to make caramel. Viola!

cosmiccook November 4, 2020
Thank you for the tips on the TYPES of pears--even those not commonly found. I've seen both Comice and Forelle but could never figure the best recipes. I can't wait to make this w them--I love those smaller Forelles too!

Anna K. December 9, 2015
I was really, really looking forward to this, but it didn't work. The sauce never came together, but separated, with some liquid and some burned solids (the butter solids, perhaps?). I cooked it over high heat, as directed. In fact, I made the whole thing 100% as directed - rare for me! Any input?
Author Comment

Kristen M. December 9, 2015
I'm so sorry to hear it—did the caramel come together at any point? For me, a couple times I deliberately cooked it too long and it separated, but I brought it back together by continueing to cook and stir, while dribbling in some water.

Anna K. December 9, 2015
I'll try that next time. I'm not sure it would have worked because the solids burned and seized up. It was weird. I will try again - I have high hopes for this dish. Thanks for the help.

Johanna H. November 25, 2015
The pedigree for this dessert goes back even further than you think. I have been cooking (to great acclaim) a version originally published by Madeleine Kamman in 1976 which is where Shere must have found her inspiration. It is from Kamman's memoir, When French Women Cook, which records recipes she learned from various women she lived with over the course of her life in France. The recipe, which includes caremelizing chopped walnuts in the mixture, specifies Seckel pears, a small seasonal variety that according to Kamman, is the only one that stands up to the oven heat. I'm delighted to have this other version that will permit me to make it outside a few weeks in autumn when Seckel pears appear in our local farm market.

annemax November 23, 2015
I'm with Lynne. How about apples, and what variety?
Author Comment

Kristen M. December 9, 2015
Anne, so sorry for the delay—see my response to Lynne below. I would use any apple with firm, not-mushy texture and tartness to balance the sweet caramel (I like Honeycrisp for pie, and it would be good here too).

annemax December 18, 2015
Thanks Kristen, I'm going to give it a try (maybe for Christmas).

Margaret R. January 20, 2016
Braeburn would be better than Honeycrisp, as Honeycrisp has almost no tartness and goes soft too soon.

John S. November 22, 2015
Read this around 5 pm, and at 6:03, I have already made this twice. It is like MAGIC? My next thought is what else could I make this with. I am in the South and my first thought is peaches, but that will require waiting till Summer. I think Ill go make it again. One skillet and it rinses clean (what I have not licked out). I had all the ingredients but did not have heavy cream, so I used half and half. Tomorrow Ill try with cream. Can't imagine it could get much better, though?

lynne C. November 22, 2015
Could you do this with apples instead? I just can't eat pears...don't know why...something about that texture...but this sounds like a wonderful thing to do with apples, too. However, I know the cooking time of an apple would be different...
What do you think?
Author Comment

Kristen M. December 9, 2015
I'm so sorry, I thought I responded to this! Apples would be great, and would just take a bit longer to cook through. (You might want to cover the pan with foil initially, then take it off to brown.)