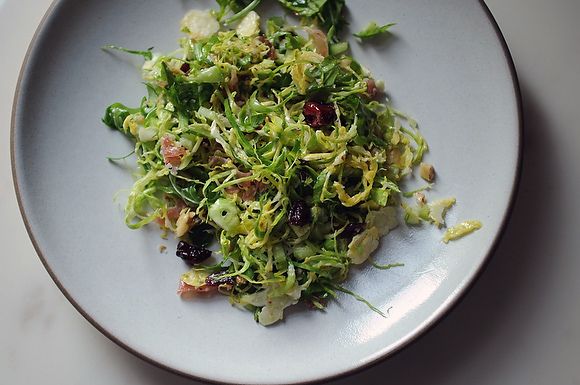 At a farewell party for Christine Muhlke, who is leaving her job as the food editor at The New York Times Magazine to become executive editor at Bon Appetit, the menu was very Gilded Age. There was veal tongue salad and coquilles St. Jacques, Tom & Jerry's mixed by Christine's husband, Oliver, and a good boozy punch, all laid out on the diner counters at M. Wells in Long Island City.

Toward the end of the party, just before the chef brought out a bunch of freshly shot woodcock for guests to help pluck, they set out a bowl of salad. All the greens -- brussels sprouts and arugula -- were finely shredded but still crisp, and there were slivers of venison jerky, flecks of celery, and bits of dried cranberry and walnut. Wrapping it all was a snappy and faintly spicy vinaigrette. A friend and I declared it the world's best salad. But we'd had Oliver's Tom & Jerry and were feeling merry. So maybe it's not the best, but it's definitely in the hall of fame. And I can't think of a better antidote to a month of gilded holiday gorging. Here is my made-up version of it:

In a large mixing bowl, combine the brussels sprouts, arugula, celery, speck, cranberries, walnuts, and cheese. Season with salt and pepper. Pour in the olive oil and add the piment d'espelette. Squeeze on about 1 tablespoon lemon juice. Gently fold the salad together, over and over, until it is fully blended. Taste and adjust seasoning.

Steve June 24, 2022
Kindle Won’t Charge is a very common issue that can take place anytime inside the Kindle tablet. To resolve this type of issue gets in touch with us for instant resolution.

martinjohn2712 June 7, 2022
The information shared in this blog post is simple and to the point. It will surely help users in diverse ways. Please keep posting.
https://ampedwirelesslogin.com/

Precious E. August 30, 2021
At Precious Eyes, we have the latest diagnostic equipment to perform the most efficient and accurate eye examination. Topcon 3D OCT-1 Maestro is a state-of-the-art diagnostic machine which allows us for early detection of ocular disease and structures of your retina and optic nerve in a cross-section like a MRI scan.
https://www.preciouseyes2020.ca/

mariasohie121 August 4, 2021
I am impressed with your work, the way you have explained the reason for every issue is unique.
http://amped-wireless-setup.com/

priyankshriii9090 February 24, 2021
I like the helpful info you supply in your articles. I’ll bookmark your blog and test once more right here regularly.

Noah77 November 5, 2020
consistently place your requirements first over theirs. This implies that regardless of how testing it is for them to fulfill your needs, they will figure out how to complete everything. https://www.zlpackindustrial.com/

Noah77 September 9, 2020
your sheets, you'll have to recognize what style the casing is. There are two fundamental edges for most however for aluminum, there's another style. https://www.wisealuminum.com/aluminum-profile/

mtrelaun January 11, 2011
This salad is off the hook delicious, Amanda!

nico843 January 5, 2011
I was contemplating Bittman's cabbage salad from todays paper when this came up in twitter, and recently saw that the Garden of Eden on Montague started carrying Piment d'Esplette, amazing timing! Can't wait to eat this tonight!

TheWimpyVegetarian January 4, 2011
Delicious! I made this for dinner tonight and it was a perfect post holiday meal! I sub'd dried tart cherries since i have a bunch of them needing a home. Can't wait to have this for lunch tomorrow! Thanks for a great recipe!!

TheWimpyVegetarian January 4, 2011
Oh, i should add that i used the grate on my food processor and it took about 1 minute to shred the bs. I have a little fear (deep respect) for the mandoline due to a really bad incident with it in school a couple years ago...:-(

Alma D. November 20, 2019
Thanks for the suggestion to use the food processor vs the mandolin!
I have several scary stories about the mandolin 😳😳!

dymnyno January 4, 2011
I love this recipe...I posted a BS recipe last year that involve very little cooking. It is amazing how delicious they are when left crisp!

BakerMary January 4, 2011
Oh, I hate feeling ignorant, and even more exposing it to the world, but - speck? The original dish had venison jerky, is this venison in some form? And what's a reasonable substitute, readily found between the coasts?? thanks in advance

Amanda H. January 4, 2011
Great question -- I didn't even bother trying to get venison jerky, so that's why I called for speck, which is cured ham, like prosciutto but firmer. Prosciutto would also make a great substitute!

lastnightsdinner January 4, 2011
BakerMary, if you have a Whole Foods Market nearby, you might look there for speck - our markets carry packaged sliced speck from La Quercia which is really delicious. A good cheese/charcuterie shop should be able to get it for you as well, if they don't already carry it.

SueonFood January 3, 2011
Amanda,
Thank you so much for posting this! What a fabulous recipe! I left out the speck and toasted the walnuts and I could eat this forever. It's a wonderful combination of crunchy, sweet and toasted goodness.