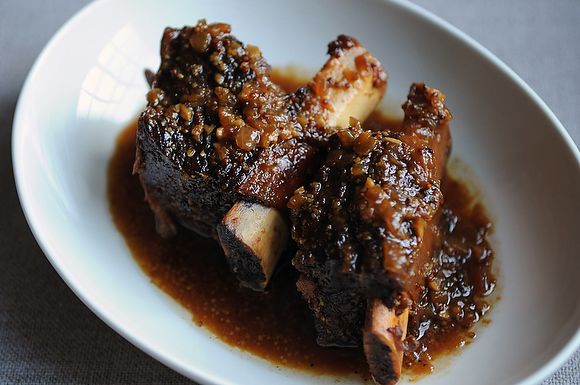 A couple of years ago, I did a write-up on buckwheat honey for the New York Times, and in preparation I met up with Zeke Freeman, one of the founders of Bee Raw honey. He sat me down for a formal honey tasting and took me through several of his favorite varieties. He saved the earthy brown buckwheat for last. While we talked about ways to maximize its rich, faintly funky flavor, he suggested using it for short ribs. With beer. Needless to say, I thought that was a splendid plan.

The recipe below is what I came up with after a little experimentation, and it ran in T Living in November, 2006. It's a rustic version of short ribs (no mirepoix or reductions here), and one that won't take up your whole day.

1. Heat the oven to 350 degrees. Put the oil in a large, heavy pan or Dutch oven set over medium-high heat. Season the ribs generously with salt and pepper and brown them on all sides, about 1 minute per side. (You will probably need to do this in batches.)

2. Remove the short ribs from the pan and pour off all but about 3 tablespoons of fat. Decrease the heat to medium-low. Add the onion and garlic and cook, stirring, until lightly caramelized, about 5 minutes. Stir in the mustard, honey, ale, and bay leaf. Return the meat to the pan and coat with the sauce.

3. Bring the sauce to a simmer and cover the pan tightly with a lid or foil. Put in the oven and cook until the meat is pull-apart tender, 2 to 2 1/2 hours. Remove the ribs, and skim as much fat as possible from the sauce. Reduce the sauce by simmering it for a few minutes if you'd like. Serve the meat warm with some of the sauce spooned over the top.

snaab January 11, 2011
I'm going to make this as soon as I can track down some buckwheat honey, any suggestions on what to use as a side for this?

AntoniaJames January 11, 2011
Merrill, would you be so kind as to post a link to the article that you wrote on buckwheat honey? Many thanks. :o)

Merrill S. January 11, 2011
Here's the link: http://bit.ly/gLaQko (I's more of a round-up of different ingredients, and sadly, the photos are no longer available.)

Kayb January 11, 2011
Darn it....I had my mind made up how I was going to make my short ribs this weekend, and now I'm wavering. May have to get more short ribs and make two batches! If there's no buckwheat honey, will regular work?

Merrill S. January 12, 2011
That's a great idea. I think a bit of molasses would also add some of the same earthiness.

allie January 11, 2011
How do you skim the fat while it's hot? I sometimes use a gravy separator, but would love an easier method.

cindy_perkins_marlow January 11, 2011
I'm so thankful you decided to not include nutritional information on your blog and that you leave it up to those of us who are concerned with that to figure it out if we choose. Otherwise, I might not be willing to try some of your scrumptious recipes. Instead I'll experience a meal that includes a large, lucious salad and one (or maybe two) amazing short ribs!

reub January 11, 2011
Looks wonderful. What do you mean by trimming the short ribs though?

Merrill S. January 11, 2011
Just getting rid of some of the extra fat and any obvious sinew.