While studying at Le Cordon Bleu nearly a decade ago, I was taught lots of highly specific, and traditionally French, cooking skills. Some, like "turning" mushrooms, have not been repeated since. (This is where you use a special knife shaped like a bird's beak to carve tiny ridges around the entire cap of a mushroom so that it ends up looking like one of those round, spinning roof vents on the tops of city buildings.) Others, like a nifty trick for cutting bell peppers, have proven incredibly useful in my everyday cooking life.

The pepper-cutting technique (Amanda's favorite of my cooking school moves, by the way) not only makes cutting up peppers a cinch, but it saves waste by using every part of the pepper. First, you slice off both ends of the pepper, essentially creating a pepper tube with the seeds still inside. Then you cut the pepper in half straight down the middle, exposing the seeds. Next, slide your knife along the ribs of each pepper half, flattening it as you go, until you have two smooth, seedless rectangles. Working with flat, regular shapes makes it easy to slice or dice the pepper however you choose. Finally, pop the green stem out of the top end of the pepper and dice the flesh along with that of the bottom end. And -- as they might say at Le Cordon Bleu -- "voila!"

(See the photos below for a step-by-step guide to this technique.) 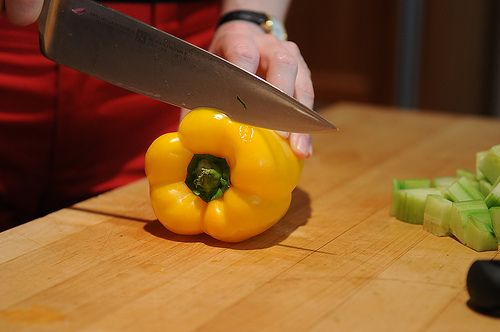 Slice off both ends of the pepper. 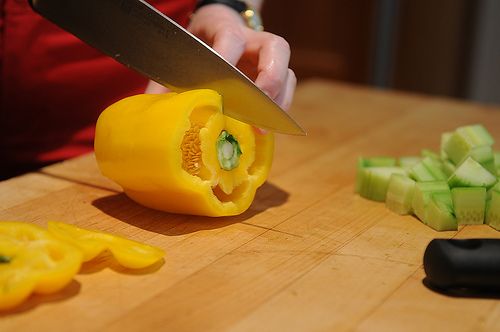 Cut the pepper down the middle. 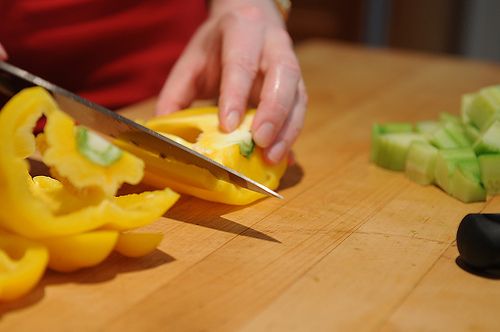 Carefully slide your knife along the inside of the pepper to remove the ribs and seeds. 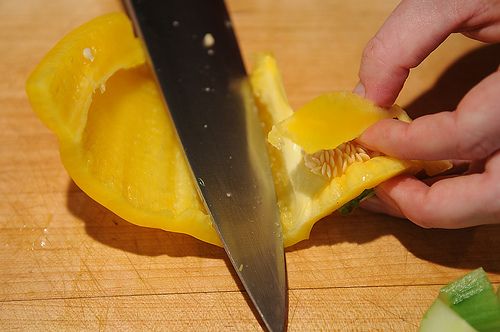 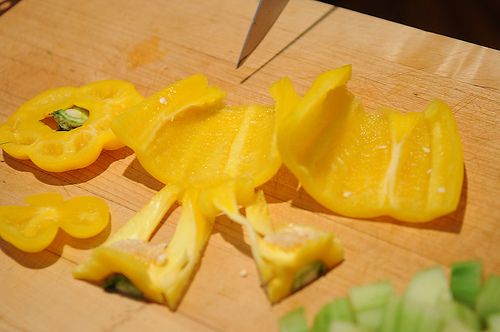 Et voila! You have two neat rectangles, plus the ends - simple to slice or chop evenly.

Amanda H. July 7, 2009
I love this technique, which I now think of as disciplining a pepper -- taking its unwieldy shape and making it into neat squares. Thanks, Merrill!