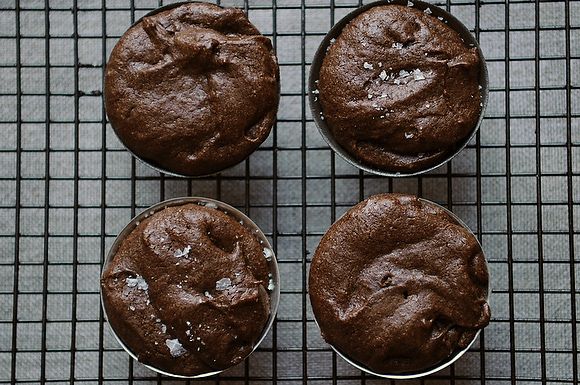 The call came at approximately 5 p.m. eastern standard time: one Incipient Pescatarian (aka I.P.) was on her way home from wandering the wilds of Tenleytown, and she would be bringing two other middle school girls for a sleep over.

My mind went to pizza, of course, but also dessert. Chocolate seemed right, specifically brownies. I checked food52, and found myself largely unmoved. There were plenty of things I would like to eat, but with tender-aged girls, one does not mess with things like dried fruit.

This could lead to social mishaps, like the time I had the temerity to send an email to the mom of the I.P.’s friend to ask if she would indeed be home during his birthday party, which somehow got translated into me calling and asking if I could personally chaperone the event.

Friends, you know I would never volunteer to be around 25 middle school children. But you see how rumors get started –- if I made creative confections for the girl crew, the next thing you know, there would somehow be talk of me serving hash brownies and dancing informally around the house in some festive head gear. Keep it simple, said me.

Suddenly, something very exciting grabbed my eye, Chocolate Fantasy Brownie Bites. In the spirit of Jenny, this recipe is super fast. In the spirit of its author, drbabs, it’s got some fun twists. Like my favorite flourless cake recipe, this one begins on the stove and can be made almost entirely in the pan in which the chocolate is melted. The author asks that you grease your mini muffin plans with butter and not canola oil, but you were not really considering that anyway.

I followed the recipe as written, but brought the espresso powder down by half, not wishing for these girls to stay up one second longer than I knew they already would. I did divide the dough into three parts, as she suggested, because you know, I was alone in my kitchen and wanted to get some danger on.

The first batch I made unadorned; they were totally done after 12 minutes so watch these babies closely, okay? I added a bit of orange extract to the second batch of dough and something a little weird happened. As the first batch cooked, the orange batter got a little tacky, almost like bread dough. Then, when they were done, I could not turn them out. I salvaged what I could, eating the crumbs by the handful just to make sure they tasted good. Confirmed.

Next I washed out my muffin pan, re-buttered it, and added the third batch of batter, which was treated with a little bit of peppermint oil. I took the puppy outside as they baked, stood shivering and wondering where all the young folks were who promised they would take this dog out no matter the temperature, no matter the day, then walked back inside to greet the divine smell of chocolate and mint dancing together in the oven. That batch turned out very well in all respects.

Here is the bonus: no crumbs from cutting! These don’t keep well –- mine sort of dried out by day three. No matter. Yours won’t last that long.

The I.P. and her friends inhaled every flavor of cookie in under 10 minutes, proclaiming them, "Amazing," and then immediately fled in the direction of a burning computer.

1. Preheat oven to 350 degrees. Butter the wells of a non-stick mini muffin pan (or two if you have them). You may be tempted to use canola oil spray instead, but I ask that you not do so. These are small, decadent, chocolatey, delicious -- you don't really want to muck them up with the taste of canola oil, do you?

2. Melt butter and chocolate in a large heavy pot over low heat, stirring until smooth. Whisk together flour, espresso powder, cocoa, and salt. Remove pan from heat and whisk in granulated sugar and brown sugar. Add eggs, 1 at a time, whisking after each addition until incorporated, then add vanilla. Stir in flour mixture until just blended.

3. If desired, divide batter into 3 or 4 batches, depending on how many different types of brownies you want to make. Into each group stir in: 1. 1/8 teaspoon peppermint extract and 2 to 3 tablespoons crushed peppermints. 2. 1/4 cup chocolate chips and 1/4 teaspoon cinnamon. 3. 1/8 teaspoon almond extract and 1/4 cup chopped nuts. 4. 1 tablespoon orange zest, 1 teaspoon orange juice and 1/8 teaspoon ground cardamom. (Amounts are approximate -- feel free to play with the proportions to your taste. It's your chocolate fantasy!)

4. To make them pretty and evenly shaped, place the batter in a ziploc bag, cut off one corner, and squeeze the batter evenly into the wells. (This works with smooth batters; is more challenging with the chunky ones. You can use a tablespoon.) Fill just below the top of the wells.

5. Bake in the middle of the oven for ~12-15 minutes, until a tester comes out with moist crumbs still adhering (if you like soft chewy brownies). If you prefer cakelike brownies, bake an extra minute or two. Better to underbake these--they will continue to bake when you take them out and they are very small.

6. As soon as they are cool enough to handle, carefully remove them from the pan and let them cool on a wire rack. To serve, you may dust with powdered sugar and/or sprinkle with flaky sea salt.

JenniferF March 6, 2011
Hi all - wondering if anyone has tried to make these and used the mini-muffin paper liners. Seriously, I am too tired to butter 36 little wells. Help!

AmyRuth March 6, 2011
Oh... the labor of love! Your reward? A lotta girltween enthusiasm.... their "award?" your wonderful gift of chocolove. I loved the description and scenario. Such a joy to read. Can't wait to try this one and what? Did I read correctly that this is the "year Oh divine brownie?" One can hope. I'm hoping for an excuse to eat brownies. Thank you for sharing.
AmyRuth

Lillia March 1, 2011
I tested three versions of these last night, because 2011 is the year of the brownie. After a serious debate, we decided that they're all best dunked in this week's coconut cajeta & chocolate fondue.

Jestei March 2, 2011
lots to say here. year of the brownie? is this a national event. i need more information stat. dunking. yeah. love. did you do the mint and orange?

TheWimpyVegetarian February 28, 2011
These look like another amazing drbabs recipe!! I'm definitely going to make them. And I can't tell you how impressed I am that you made 3 (!) versions while getting ready for an small onslaught of tweens or almost tweens!! And taking care of a little puppy to boot!! And there's the whole working thing too. Brava!

Jestei March 1, 2011
really all you do is separate the dough and put some flavors in. so i can't get too much credit for variety. but i appreciate your support for the trauma that is the middle school sleep over!!! xx oo

amysarah February 28, 2011
You survived a sleepover with middle-school aged girls (it's an affliction, I tell you), managed to lure them away from the computer screen, and even baked for them - multiple varieties, no less. Very impressive indeed.

Also, the variation with the Junior Mint hidden in the middle should be called Seinfeld Brownies. (Brownie points - bad pun intended - if you know what I'm talking about.)

Jestei March 1, 2011
i agree this is a great brownie development

Jestei March 1, 2011
all her recipes are lovely

Blissful B. February 28, 2011
Jenny, you bring a smile to my desk every Monday. Thank You!

Jestei February 28, 2011
and now you have to mine. and seriously, i NEVER smile here.

mrslarkin February 28, 2011
Oh, love this. Methinks these would be real good with a junior mint stuck in the middle. Thanks jenny & drbabs!

mcs3000 February 28, 2011
Hilarious, Jenny. You know I'm going to make the peppermint version (having just made more of your junior mints for the Oscars). Thank you and @drbabs!