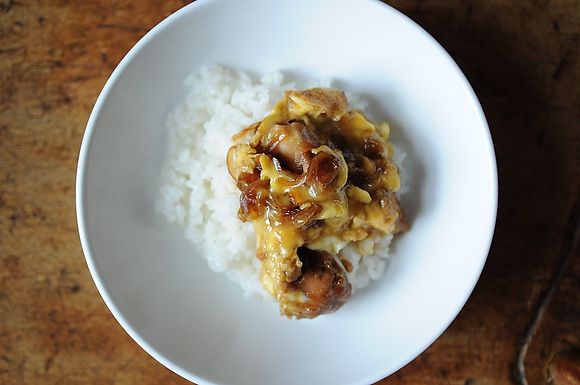 When I was a college student living in New York in the late 1980s, two deficiencies in my life –- cash and food knowledge -– often came together along St Mark’s Place. This was the St. Mark’s Place of incense, thumb rings and bad pizza by the slice, and a few random inexpensive eateries, including one Japanese place, which I believe was called Sushi Boy.

(There might have been a French restaurant, too. I went there later, after I got a job. Does this make you feel nostalgic and historically-obsessed about the street? Here is a nice read.)

While some of my friends would hit the sushi specials at I-think-Sushi-Boy, I, a girl from Kalamazoo who had grown up on rump roast and canned corn, was not ready for that. But I soon became addicted to oyako don, a simple bowl of rice, chicken and eggs that set me back all of $4.99. I ate it with friends as they sucked down their half-price hamachi, and regaled me with tales of conquests at the Aztec Lounge. I ate it alone while thumbing a copy of Spy magazine. I am pretty sure I once paid for a bowl of it completely in tip quarters.

As the years went by and my palate expanded, oyako don ceased to be my go-to item on the Japanese menu, though I am pretty sure I had a good bowl of it at Robata-Ya, one of my favorite spots in Los Angeles, on a sort-of chilly night (read: 60 degrees) last year.

So, when trying to figure out what to do with my weekly delivery of boneless chicken breasts, I was tickled to land on Francesca’s Oyako Don. You will note that Francesca suggests that you make this with thighs, which is a bit more work than chopping up boneless breasts, but no doubt yields a bit more poultry flavor push.

You know sometimes I cheat here by providing a weeknight recipe that takes over an hour, but this isn’t one of those weeks. You just chop those onions and chicken pieces up, get your sauce ready and get it going.

I confess I worried that onion cooked in broth, rather than oil, would end up somehow too close to its raw form, but this was not the case. I did not have Mirin at the ready, but substituted with sherry and it actually worked just fine. (If you’re going to make this and have time to plan ahead, however, get the Mirin.) Also, I like the way you make this in batches, all custom-style, and yet it cooks so quickly that no one really has to wait long for you to sit down with them.

My husband felt it was a little on the bland side, and to that end, the dish would benefit from some sliced scallions, as other oyako don recipes sometimes call for. But the sweet kick of the sauce mixed with the hearty simplicity of chicken and eggs transported me right back to the East Village, to memories of laughter with friends no longer with me, and the meals that I shared with them before heading off to the Holiday Bar, at a time in life when we were too young to realize just how good we had it.

YumMom March 28, 2011
Made this last night, and wow, how delicious, quick and easy! I made it for four all at once in one big pot (doubled the recipe, except used 4 eggs instead of 6). I used chicken breast instead of thigh, and I used white wine instead of sake. The only thing I'd add to make this a nice well-rounded one dish meal is something green and crunchy, like bok choy or broccoli. Definitely on my meal rotation now! Thanks!

roryrabbitfield March 27, 2011
I love Oyako Donburi. I posted this version on Food52 a while ago: http://www.food52.com/recipes/2293_oyako_donburi_japanese_chicken_egg_bowl

Yuki March 24, 2011
What a coincidence. I just ate Oyako-don tonight. It's a go-to recipe when you don't want to cook something complicated. My advice is add Shiitake and Chikuwa or Kamaboko(which are made of fish paste and you can get it at any Japanese supermarket such as Marukai, Mitsuwa, etc. if you are living in L.A.) Plus garnish it with chopped Mitsuba. You should really use Japanese Dashi because it is quite different from Chiken broth. I used to live in Torrance and you can get everything there.
Author Comment

Jestei March 24, 2011
you had to talk about torrence. are you trying to kill me yuki? HOMESICK FOR SOCAL!!!!!!
delicious ideas, thank you.

YumMom March 24, 2011
Can this be made in one big batch to feed a family of 4, so I don't have to cook it in 4 different stages and we can all eat together??

Pat E. March 24, 2011
Yup! I usually do it in a large flat skillet and then just dish it out with a spatula. It's not quite as pretty but it tasks just as good.

wanderash March 22, 2011
What a crazy coincidence! This weekend I had an intense craving based in nostalgia and had to recreated the unforgettable Carrot Ginger Dressing from a popular 80's and 90's establishment on St. Mark's Place- Dojo's.
Author Comment

Aimless March 22, 2011
There was a katsu don (similar but with pankoed strips of pork) recipe in the NY Times magazine some years ago that I've made a number of times. I'm going to try this version, and maybe add the sprinkle of green peas, pickled ginger, and toasted snipped up nori that the other recipe calls for. Adds color, broader nutrition, and texture.
BTW, I don't know of another food site that has the variety, detail, and wisdom that Food52 has. I keep learning here, and being inspired.
Author Comment

Jestei March 22, 2011
I enjoy the nostalgic value of the dish as written, but I do agree those extras would be delicious. Esp pickled ginger. I second your view of the site -- I learn something here literally every day. xx oo

Rhonda35 March 22, 2011
I had never heard of oyako don before - it looks and sounds pretty tasty! I did a Google search to see how others make this dish. I didn't discover anything wildly different from Francesca's recipe, but I did discover this bizarre oyako don cooking demonstration:

What's up with the poodle?!!

Pat E. March 21, 2011
We had Katsudon the other night. That's made with a fried pork cutlet (Katsu) and is equally yummy. It's supposed to be made with dashi but that's too fishy for me so I use chicken broth just like this recipe. BTW...Oyako-donburi comes from the topping of chicken and egg. Oyako means "parent and child." I guess I learned something when I used to be Pat in Tokyo. All the variations are great comfort food.
Author Comment

pierino March 21, 2011
I can hardly think of anything more satisfying than a dish that includes rice and eggs (unless it's noodles and eggs). But I thought mice and eggs was the East Village specialty.
Author Comment

fozziebayer March 21, 2011
A bit off topic, but was that sushi place Teriyaki Boy?
Author Comment

Jestei March 22, 2011
no teriyaki boy is a chain of take out sushi. this was something else. maybe it was actually go sushi now that i think about it.

MrsWheelbarrow March 21, 2011
How have I lived this long without ever having Oyako Don? Thank you for bringing this simple quick seemingly perfect dinner to my attention. I'm wondering if I could do the same w/tofu or fish for my Pescaterian?
Author Comment

Jestei March 22, 2011
fish might fall apart a little or be weird with the egg? i think some firm tofu might be good.

Midge March 21, 2011
Loved reading this. Can't wait to give it a try.
Author Comment

MaryMaryCulinary March 21, 2011
Oyako don is one of my favourite Japanese dishes, yet I've never made it. When I was living in Kobe I used to occasionally get a bowl after getting off the train and before returning to my cold apartment. Pure comfort food!
Author Comment

susanv March 21, 2011
Jenny, I've so enjoyed your writing for a few months now...the highlight of Monday morning...and the recipes as well. You're from Kalamazoo! I live close to Lake Michigan (the "third coast").
Author Comment

susanv March 22, 2011
Spring Lake (next to Grand Haven)...1/2 hour west of Grand Rapids...and three hours from the nearest Whole Foods, which is near Detroit.

mariaraynal March 22, 2011
Wow, I'm surprised to hear there's no Whole Foods in Grand Rapids! But, then again, I'm in Grosse Pointe (aka the fourth coast...ahem) and the closest one to me is 30 minute away.

CurlyAnnie March 21, 2011
I am addicted to Gyu Don, which is the same but made with thinly sliced beef. I've wondered how to cook it at home! Thanks for sharing, I look forward to trying this when my egg-allergic hubby is out of town!
Author Comment

Jestei March 21, 2011
oh beef sounds great too! thanks for commenting.

mrslarkin March 21, 2011
This sounds so delicious. I wondered how Francesca from Sicily came across this very Japanese dish. Looks like she's traveled the globe quite a bit. A click on her blog link brought me to a youtube video of her beautiful and talented daughter. Check it out. It made my Monday-Jenny morning even better! Thank you Jenny and Francesca!
Author Comment

thirschfeld March 21, 2011
wow, you were living high on the hog. Go to for me in the East Village was a Polish diner for a bialy and two tiny Polish inspired breakfast sausages a whopping 99 cents. Those where the days and believe it or not I still crave bialys some 15 years later.
Author Comment

Jestei March 21, 2011
Oh I did all that too. Soup at Christine's. That stuff you mention from the methadone clinic place on 21st street. All manner of bagel and bialy. Good times.