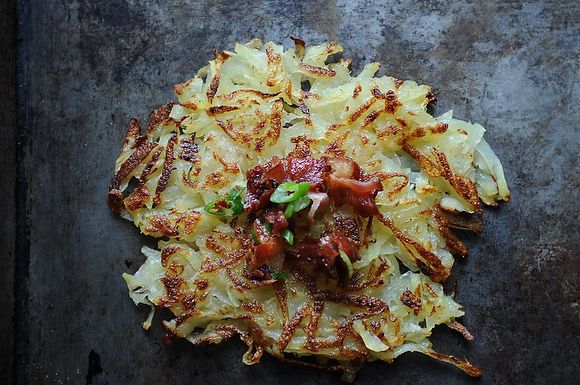 Merrill and I both live in Brooklyn, which means that any time an interesting new restaurant opens, we trade tips. For weeks, she's been raving about The Vanderbilt in Prospect Heights. After I went, we decided to both devote our next two blog posts to Vanderbilt-inspired recipes.

Restaurant dishes don't always fulfill our expectations, but that doesn't mean we have to give up on them. When I was at The Vanderbilt recently, I ordered the hangar steak because it came with horseradish hash browns. My dream of slim and shaggy hash browns was foiled when a block-shape potato arrived, looming over the plate. No matter -- I took the flavor idea home with me, flattened them out, and paired them with the bacon vinaigrette from OB Cookie's winning potato soup.

Pick up a hangar steak and fire up your grill, or simply top the hash brown with a fried egg and the bacon vinaigrette. You won't send me hate mail, I promise. 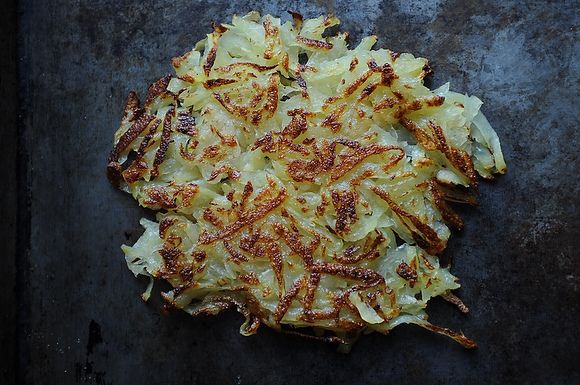 Chauncey March 27, 2011
Slides show you making the bacon vinegrette with red wine vinegar, but the recipe calls for apple cider vinger. Guess I'll have to try both ways! Darn :-)

Amanda H. March 27, 2011
You can use either -- and OB Cookie makes her bacon vinaigrette with white wine vinegar. I'll adjust the recipe. Thanks!

lastnightsdinner March 27, 2011
Just made these to go with our Sunday brunch, and they were fantastic. Mike said "you can make these any day of the week." I definitely would! Thanks so much for sharing the recipe.

Katya March 27, 2011
Lorinarlock, you won't find The Vanderbilt in Park Slope. Even the most rapacious real estate agent would tell you it's in Prospect Heights, along with the above-mentioned James. I'm kind of a crappy neighborhood booster, in that I haven't actually been to the restaurant, but come on, Food52, give Prospect Heights some love.

Lori L. March 27, 2011
Thanks, Katya! I actually just explored Prospect Heights on my last visit and loved it. I can't wait.

boulangere March 25, 2011
The heat of horseradish plus potatoes plus bacon - what's not to love!

Sagegreen March 25, 2011
Thanks for the recipe and tip for the restaurant. I have a piece in a group show opening in Brooklyn (in Williamsburg) next month, so will be looking for places to try!

lastnightsdinner March 27, 2011
I'll second the recommendation of Egg - it's one of our old faves!

MeghanVK March 28, 2011
Oh, my lord I love Egg. Their hash browns, incidentally, are a deep-fried potato bomb. An excellent way to start the weekend!

aargersi March 25, 2011
Yum! You could leave a little of that bacon fat in the pan to fry the potatoes in too, yes?

drbabs March 25, 2011
My husband--the horseradish addict--will love these. (BTW, the link to save and print the recipe isn't clickable.)

Amanda H. March 25, 2011
Yes, sorry, was sleeping on the job. Fixed now! Thank you so much for your many kind messages letting me know when we've forgotten details or links aren't working, etc. We really appreciate it!

Lori L. March 25, 2011
Wow. My mouth watered looking at the photo and reading the recipe. I can't wait to try these over the weekend and to try Vanderbilt next time I'm in Park Slope.