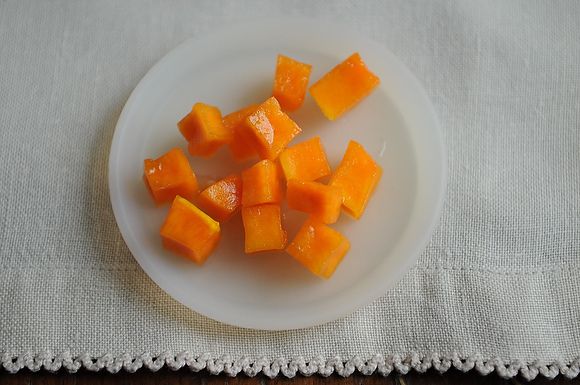 A few years ago, a New York restaurant opened called Dirt Candy, a reference to vegetables. I always loved this name. Then our first intern at food52, Helen -- you remember Helen! -- showed me how to make real candy out of dirt candy.

Dirt candy was a trick Helen learned while working as a cook at Prune in New York City. There, they would cut butternut squash into tiny cubes, shower it with sugar and let it sit for a few days.

Indeed, as Helen showed us, over the course of a few days the tiny cubes let go of their moisture and raw flavor and shrunk, yet retained their crisp snap.

I've tried the recipe with both raw and white sugar. Conventional white works best. I've also extended the trick to beets and carrots, which work well, although the butternut squash sweeps the dirt candy field.

Adapted from Helen, who adapted it from Prune restaurant in New York City 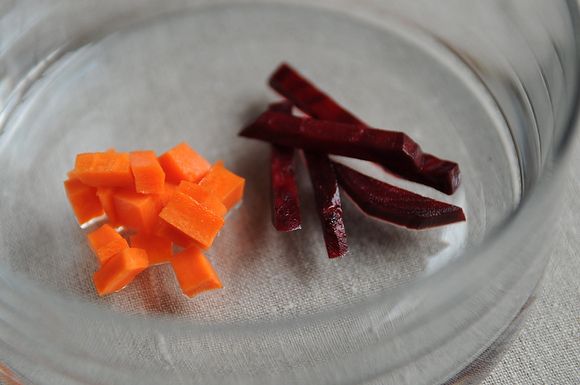 aaakk April 5, 2011
i don't get it. why the sugar? just roast them and they're plenty sweet. i've been roasting winter vegetables for salads and it is like eating candy.

Amanda H. April 5, 2011
Because the sugar helps cure them while raw so they maintain a crispness and freshness. Try it out and see!

amysarah April 5, 2011
Other than simply eating it by itself, any suggestions for using the 'candy'? I can imagine it cut small and scattered over a salad for a sweet element (instead of e.g., candied walnuts or dried cranberries) - maybe with shavings of parm or crumbled goat's or blue cheese. Maybe the butternut candy in a fall ice cream sundae kind of thing - with cardamom or ginger ice cream? Any other ideas?

Amanda H. April 5, 2011
Those all sounds like great ideas. Could also serve it over fresh ricotta with a little honey. Or with an aged sheeps milk cheese.

Panfusine April 4, 2011
There is a traditional dish from Agra, India that epitomizes your definition of dirt candy, its called Petha (pay-ta). Its made with white winter melon squash & sugar syrup,with saffron & screw pine essence offering variations in flavors.. Extremely addictive.

hardlikearmour April 4, 2011
Okay, I'm intrigued! I've got a spare yellow beet in the fridge which I'll cut into matchsticks and sprinkle with sugar.

Amanda H. April 4, 2011
What I found was that with denser vegetables like beets, they end up staying quite crisp but nicely sweet, whereas butternut squash gets tender but also retains a little snap. Make sure to cut your matchsticks thinly!

hardlikearmour April 4, 2011
I think I'll test out some parsnips as well, and report back in a few days!

hardlikearmour April 7, 2011
I made yellow beet and parsnip dirt candy. Both in matchstick form. The parsnip is my favorite - sweet, a little earthy, soft but with some texture. I'm guessing it would give the butternut a run for its money! The beet is okay, but it's no parsnip! It keeps a nice crunch and the matchsticks get a little squiggly looking. The syrup is a neon yellow, and when I mixed some in carbonated water it looked exactly like Mountain Dew!

Amanda H. April 7, 2011
I'm delighted that you made your own dirt candy! And thank you for venturing beyond the vegetables I suggested. I'm going to try the parsnip next time!