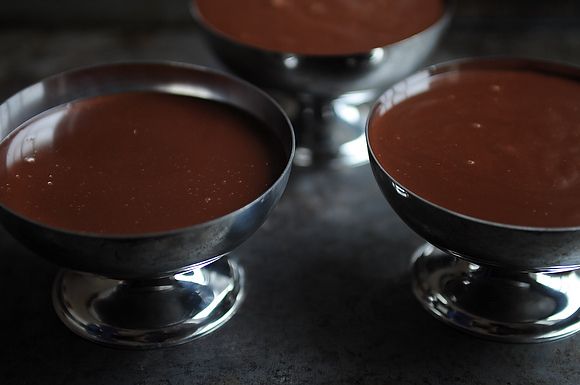 For months, Alex Talbot, one half of the duo behind the ingenious blog, Ideas In Food, has been telling me I had to try the chocolate pudding from their new book. The entire pudding is assembled, and the eggs cooked and thickened, in a blender. The texture, spun by tapioca flour (rather than cornstarch) is otherworldly, he promised.

Talbot’s and Aki Kamozawa's recipe satisfied every wish. Merrill compared its richness to Italian hot chocolate. Another food52er described its texture as having the bouncy elasticity of diner pudding. It was sleek and charming, not at all daunted by the demands of satisfying childhood memories.

Adapted from “Ideas for Everyone” by H. Alexander Talbot and Aki Kamozawa 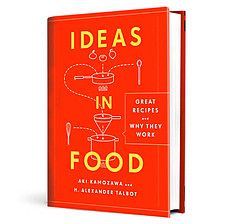 mcs3000 April 12, 2011
I got "Ideas in Food" at Omnivore Books a few weeks ago, but hadn't made anything from it. Thanks for prompting me to do so. The texture is "otherworldly." Totally exceeded my childhood puddings I loved so much. Excited to dig deeper into this book!

melissav April 11, 2011
Can't wait to try this. I recently attended a dinner hosted by Ideas in Food here in Miami and it was AMAZING. The dinner was at an art gallery and everything was prepared in an airstream trailer parked outside the gallery. I was shocked at the quality of food and presentation that came out of that tiny space. . .and they were serving a 50 person sitdown dinner.
Author Comment

sboulton April 10, 2011
I have used this technique for years for speeding up the process for banana cream pie. It's fabulous. Soooooo easy!!! The tapioca just sets up right away. If you don't want a skin on the top, put plastic wrap right on the pudding's surface.

Mei C. April 10, 2011
Hey--do you think that this would work with an immersion blender? Crossing fingers...
Author Comment

Amanda H. April 10, 2011
It might be a little tricky to get the egg yolks and tapioca flour to blend because there's so little volume, but you can always whisk that part by hand. Once you start adding the hot milk mixture, the immersion blender should work really well. Have fun!

Oui, C. April 10, 2011
Hmmmm....looks like I need yet another item for the pantry, tapioca flour. Glad I have a dishwasher safe blender hopper. - S

Soozll April 8, 2011
There's an even easier one that doesn't include the tapioca flour by Rachel Ray! It's quite thick when it's set up in the fridge for a couple of hours. It's delicious. I've even used it as a filling in the Chocolate Blackout Cake. Here's a link:
http://www.rachaelrayshow.com/food/recipes/chocolate-cups-whipped-cream/

mrslarkin April 8, 2011
I remember these guys from your Beet Rum-Mousse article, Amanda. Wacky science-y stuff - I love it! As much as I hate washing the blender, this pudding is on my to-do list - maybe tonight.
Author Comment

Amanda H. April 8, 2011
Definitely worth the washing. I soaked mine for a few hours after, then it cleaned right up.

drbabs April 8, 2011
Hi Amanda. 2 questions: Does the tapioca flour prevent the pudding from forming a skin? And do you think you could make this with an immersion blender or in a food processor? (My blender died and I haven't replaced it.) Thanks!
Author Comment

Amanda H. April 8, 2011
The first step -- blending the tapioca flour and yolks -- might be a little tricky with an immersion blender, but the rest should be just fine.