Spaghetti with Shrimp, Broccolini and Basil 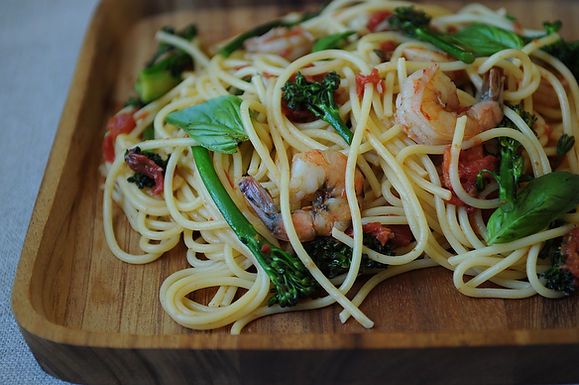 I think you’ve had weeks like this. Tired of being the only person who attacks the Sisyphean piles of clothes around the house, you begin the week by deciding to go on a laundry strike, a job action somewhat thwarted by the realization that you are the only person disturbed by the absence of clean socks, as others simply turn to flip flops.

Next you volunteer to “watch the kids” backstage during the middle school play, which devolves into two hours of sheer terror as you attempt to turn a child dressed as a feather duster into a human, which involves approximately 35 safety pins in the pitch dark, and shove a 13-year-old boy wearing large furry gloves into a tux jacket two minutes before their next respective scenes, tasks for which you were given four minutes of training and occurring while another child, pantless and about to go on stage, informs you that she has lost her skirt.

You put too much meat in a Bolognese.

All the while, the mid-career butterflies beat endlessly against you, causing no fatal blows, but reminding you one smack at a time that your professional destiny is no longer really under your control.

No? Well that’s okay, you can make TasteFood’s Spaghetti with Shrimp, Broccolini and Basil anyway!

Too tired to think about planning meals last Sunday, I arrived at this recipe by turning the fish section of the recipes over to the incipient (last seen gnawing on a lamb chop for the first time in her life at a food52 potluck, so irresistible was it) and she picked two dishes. I lacked a crucial ingredient for one, which I will feature next week, but dug right into this pasta.

I do not think I will be hurting the feelings of the incredibly gifted TasteFood by pointing out that this dish is not exactly revelatory. Most of us at some point have probably thrown some shrimp and vegetables into pasta to create an instant meal in a bowl, and know that crushed red pepper flakes are the secret to whipping a simple dish into a bit of a frenzy.

But I loved the reminder of this technique, bolstered by the broccolini, a vegetable I tend to forget about and am always happy to have land in front of me. Further, this is a dish that someone in your house, even a kid, can whip up for you if you’ve managed to, say, end up on a train that “will be moving shortly.”

This is one of those dishes that require little mise-en-place -- you really can just keep opening cans, pulling out jars and rinsing off your shrimp as things sizzle in the pan. I used more shrimp than the recipe called for, simply because I did not weigh them as I grabbed them, and I recommend against this, because they crowded my dish.

What I would suggest however is doubling the broccolini, because it is almost impossible to have too much of it, and it cooks down a bit in all of this. I also prefer closer to a heaping teaspoon of red pepper flakes in the beginning, but that is totally to taste.

Clean up for this is easy -– especially if you make someone else do it -– and I was left with two healthy servings for sack lunch, which is an excellent way to start the week.

Spaghetti with Shrimp, Broccolini and Basil by TasteFood

thecrabbycook May 22, 2011
Another way to go (if you are a lazy ass like me) is to dump the broccolini in with the pasta when it has 3-4 minutes left to cook, drain pasta and broccolini together, save yourself a step.

Jestei May 17, 2011
there will be another events and we can't wait to see you soonest

fiveandspice May 17, 2011
I totally identify with your week (though none of the, erm, fun? of hanging out back stage with middle schoolers)! This dinner looks like an excellent solution to at least one of the dilemmas raised by such busy-ness!

mcs3000 May 17, 2011
Hope this week is better. Mid-career butterflies? Jenny, no need to worry. You're @ the top of your game. Love your byline whatever zipcode you're in.

mrslarkin May 16, 2011
yes! What a beautiful tangle of colors and flavors, sort of like your week. In the end, it's all good.

boulangere May 16, 2011
MrsL and Victoria, perfect description that "tangle"

boulangere May 16, 2011
Now that I think of it, so like Jenny's beautiful hair

Victoria C. May 16, 2011
This looks so pretty all tangled on the plate together.

boulangere May 16, 2011
One of my favorite summers was the first one that my son didn't come home from college. Let me explain: to hold ourselves together, my daughter and I cooked our way through Joanne Harris's My French Table. She would decide what we should make, and even tell me the story behind it. After a couple of weeks, it felt less strange to have him not there, and evening became something we looked forward to with less dread.

healthierkitchen May 16, 2011
We missed my son quite alot this past year - his first at college - but my daughter and I, too, started cooking together, often a food52 recipe that she'd pick. She has very different taste in food than my son, so it was nice for her to have more of a say and leading us more towards her style of eating. I can't say it was my favorite year, but it did provide for some lovely and harmonious bonding time for us. So maybe bittersweet? Very happy to have him home now for the summer - wondering if it will be the last. And still working on getting him to cook!

boulangere May 16, 2011
Oh, definitely bittersweet. Of the two of them, she is the one who cooks a lot now. My son is still pretty content to eat what is made for him, but he does do the washing up.

boulangere May 16, 2011
P.S. My son's girlfriend is the one to whom I give cookbooks. She's happy to cook for them both. So far.

Jestei May 17, 2011
i love this threat. i can't imagine the feeling of a child gone missing to adulthood. not yet!

boulangere May 18, 2011
When friends tell you to enjoy their infancy then toddlerhood then youth then teenagerhood, especially the latter when you are tempted to remember why animals eat their young, enjoy it. It goes fast. Really fast.

phyllis May 16, 2011
Perfect I have to cook something dinner. Do it often with an ever changing roster of vegetables. I hope this is a better week for you!!!

TasteFood May 16, 2011
Thanks to you and incipient for choosing to make this recipe! I see a similar week on the horizon.

healthierkitchen May 16, 2011
I think my dinner dilemma for tonight, after a busy, busy weekend, is solved! Many thanks to you, Tastefood and the lambchop eating incipient. So sad to miss the brunch.