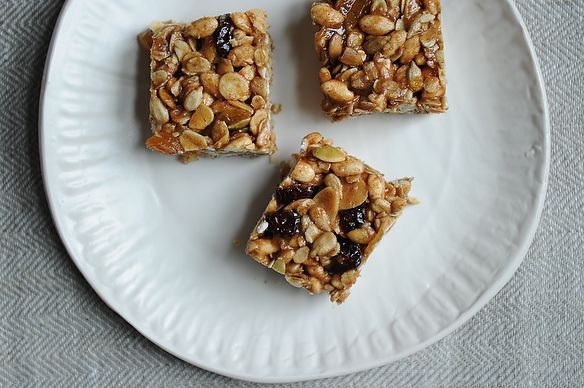 My friend Sara is a great cook, and she's forever amazing me with her deftness at making something transcendent out of a few simple ingredients. A few weeks ago, she had me over for dinner and whipped up a delicious salad as I sat at her counter: she whisked together anchovy, lemon juice and olive oil for a simple dressing and then tossed it with dandelion greens, sliced radishes, salt and pepper. It was perfect with the roast chicken she served alongside it.

Sara doesn't tend to favor elaborate, cloying desserts -- more than once she's ended the meal with a plate of her homemade "granola bars." They're chewy and rich, a jumble of nuts, cereal, seeds and dried fruit barely held together with almond butter and honey (no baking involved). She's not shy with the salt, which I think really sets these bars apart. Last week, she shared the recipe with me, and now I'm sharing it with you. These are great to have around, as a dessert or a snack.

A few notes from Sara: "I use unsweetened or apple juice sweetened cranberries; otherwise they are too sweet for me. Also the "glue" ratio (almond butter and honey) to nuts/oats/seeds/crispies is not an exact science -- just a general disclaimer. I will give a nod to the Minimalist, because I got the brilliant idea of introducing brown rice crispies from him, thus forever lightning up the dreaded granola bar. (They should probably be called something different than granola bars, too -- I think that's a generic term and doesn't really do them justice.)"

Jennie July 15, 2015
I made these to bring to a Family Camping Trip, they were a Huge Hit! I did add unsweetened coconut, but otherwise followed the recipe. I love the almond butter, honey, cinnamon, sea salt flavors! Thanks!

Susan July 13, 2014
These are very good. I made them according to the recipe and made no alterations. They are going to a family get-together today. Was wondering about storing them....do they have to stay in the refrigerator?

Merrill S. July 13, 2014
As long as they stay cool, I think they'll be fine. Fridge is probably best, though -- and honestly, I like eating them a bit chilled!

messychef505 January 20, 2012
Do you have any Nutritional Info on this bars? They sound awesome. I'm going to make them this weekend and use agave and almond butter..mmm

jessicawgraham May 31, 2011
These look amazing! What would be a good alternative for honey?

mcs3000 May 31, 2011
Made these today with cranberries + pluots. Freakin' fantastic. The honey + almond butter are so perfect - make all the ingredients shine through. Thank you!

Snora520 May 30, 2011
Looks awesome! Any idea on an alternate version for those of us with nut allergies?

RisaCooks May 29, 2011
I get Brown Rice Crispies in a box at the supermarket - Erewhon brand. Right in the cereal aisle. I make my own granola and granola bars. I will try this recipe. looks wonderful.

Veith May 29, 2011
This looks yummy! What is the brown rice crispies recipe from Minimalist?

FoodieGoesHealthy May 24, 2011
My kids love any kind of "bar" in a foil wrapper. These sound a lot healthier and tastier. Can't wait to try them. Thank you for posting. Now if only I could get some foil wrappers and a vacuum sealer.

iuzzini May 24, 2011
Mmm! Love these! I often mix in sesame seeds and some ground flax seeds too.

Ladystiles May 24, 2011
I love the idea of making them a bit lighter with heaps of puffed rice. Thanks for sharing!

singing_baker May 24, 2011
These look great. I was looking for a healthy snack to make for in between meals and I think this is it!